Astrid Andersen: Post-Gym-Chic Sumo Wrestler Extravaganza
The quintessential Astrid Andersen man recently returned from Japan, where he finished a two-week intensive training course in the ancient art of Sumo wrestling. Moving East and beyond from America’s basketball courts, AA has maintained his athletic idiosyncrasy (nylon textures and practical sweat pants are still at the core of his wardrobe), but integrated quite a bit of delicate floral prints for a gender-flexible summer vibe. Nonetheless, AA starts his day with 50 push-ups in his sunrise-brocade kimono, while listening to a slow-downed version of TLC’s “Creep.” For obvious reasons, his favorite artist is Fatima Al Qadiri, who he plays repeatedly on his iPad Mini. AA has come to terms with the fact that ‘sport’ is an aesthetic activity as much as it is a physical one; rather than posing for the NBA trials, he is subverting notions of masculinity by wearing crop tops to the gym. 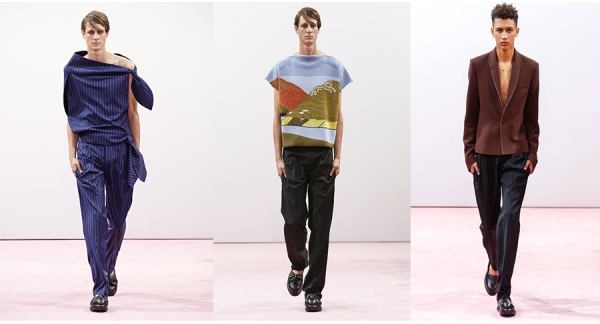 J.W. Anderson: Sleepy Art School Third Base Realness
The JW character is forcefully understated, sexy, super-aware je ne sais quoi. His eroticism lies in his inherent drowsiness; he strolls into university lectures a bit too late to steal the show with his ‘woke-up-like-this’ hair and effortless elegance. At an early age, the eager Belle and Sebastian fan understood to use his awkward body as an aesthetic tool. Never scared of showing a bit of shoulder, he effectively achieves a kind of deconstructed masculinity. He has a good understanding of form, texture and color, and often spends his day transforming basic t-shirts into beautiful one-shoulder tops when he decides to go offline for 2-4 days just to stay real. The JW boy detests sneakers (‘a misunderstanding of modern street wear’), but takes pride in refiguring and taking the traditional male suit in a new, genderless direction. 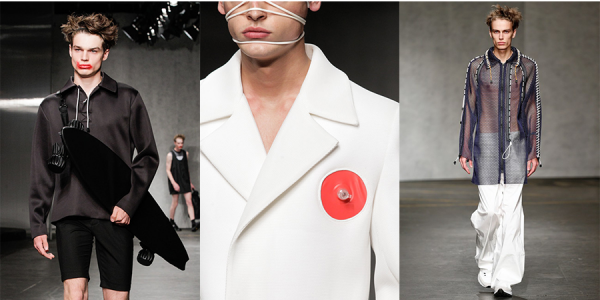 Xander Zhou: Adolescent Chinese Star Wars Beach Party
Xander Zhou is the first Chinese designer given the license to use Star Wars imagery in his design, so why not take Darth Vader to the beach? School’s out for XZ, a juvenile European expatriate residing in a coastal city of southern China. He’s spending the summer at the beach, wake boarding in his custom-made one-piece that shows just enough chest to be culturally inappropriate. When he’s not studying mechanical engineering, he’s on the Internet studying European nautical life and late ’90s raver culture. XZ loves his intergalactic drama, and likes to think that a ‘dark force’ runs through his wardrobe (underlined by his occasional smeared-lipstick Joker look). Naturally, this ties in with his fascination for technological futurism; PVC is his favorite material, and on the weekend you’ll find XZ browsing for mesh polo shirts and glittery blazers at mall while texting his eBae.