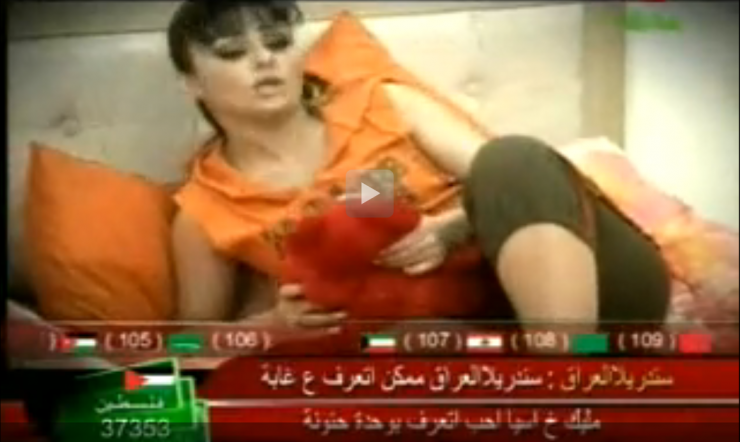 This Snooki-like Iraqi singer, Rita Al Turk, is giving signals and outfit changes from Baghdad that cannot be ignored. First off, her song is called “I Don’t Wanna Love You,” which instantly reminded me of the earnestness of country-western song titles.

Also, I did find a song called “I Don’t Want to Love You, (But I Do)”—Ewww!—by “Kelly Willis,” some crap country crooner whose being is vastly inferior to our lady of Rita.

Back to the video: Rita’s collection of stuffed toys popping up everywhere—including a red teddy she’s overly fond of—is the God-given sign of a true baby lady. A pouty pajama look in the kitchen had me gagging in praise. In one setting, her orange top matches her bed pillows to a T, lest you forget Arabs tend to be really matchy with color.

Meanwhile, on the street, our heroine argues with her man in a knock-off Juicy Couture ensemble with a high ponytail accent. Rita’s such a perfect princess, she even makes a placard for her man that reads, “I don’t want you.” Beginning 2011 with a new baby lady post can only be auspicious.

Side note: I was only able to find this video on YouSimo, the new Asiatic YouTube imitation. Get into the low-quality future.