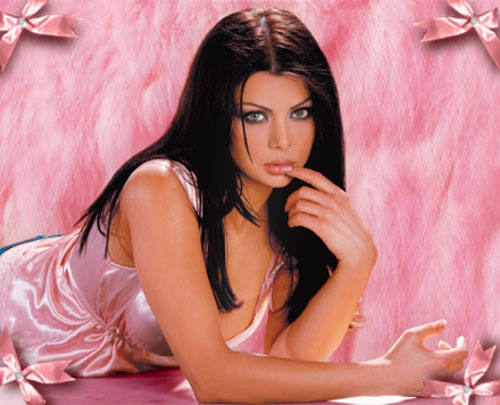 Let me share a few words on Haifa Wehbe, the sluttiest, baby-groping pop seductress in the Middle East.

Hailing from Lebanon, Haifa is unlike every other female pop star in the world. This is mostly due to the fact that she cannot stop singing and prancing around babies. Her songs feature lyrics that espouse the *goo-goo-gaa-gaa* language of infants, as exemplified in her hit song, “Bus-al-Wawa” (literal translation: “Kiss the Owie”). In this video, Haifa tells her baby to “kiss the owie” and make it better, as the two of them frolic around excessive amounts of popcorn and chocolate sauce. Haifa is the ultimate ghanoozha, a term that is sadly lacking in the English language, and means something along the lines of “baby lady”, “pouty shenanigans”, or any other other type of highly feminized, infantile behavior.

Her song “Baba Fen (Where Is Daddy?)” is another assault on the senses–and baby propriety–featured here with crappy English subtitles. [Editor’s Note: Some quick Googling reveals that this track caused outrage among Black Egyptians due to the child’s demand for his “nubian monkey”, provoking lawsuits and allegations of racism in Haifa’s lyrics.]

In reality, it is well known that Haifa abandoned her husband and children years ago so that she could become a starlet, but still she cannot stop gyrating around small children in her creepy pursuit of motherly moments. For those of you who don’t know, welcome to the freaky world of Middle Eastern pop music, where seemingly cutesy antics are never mistaken for suggestive pedophilia, and a “baby lady” reigns queen.