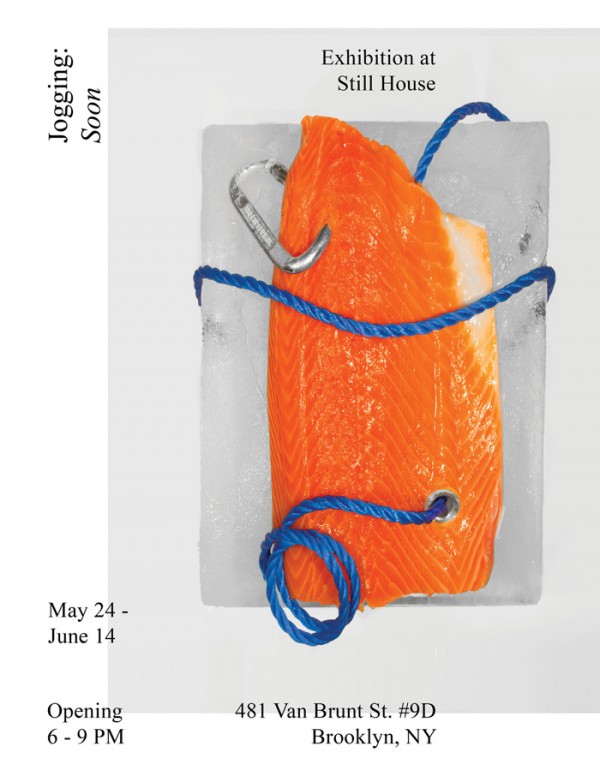 Jogging presents ‘Soon’ an exhibition at the Still House, opening Friday May 24, from 6 – 9pm.

After party music provided by Slava.

For most, the trip to the Still House is a lengthy one, poetically punctuated at the end of Brooklyn’s Van Brunt Street by a view of the Statue of Liberty standing in the Hudson River. Upon congratulating yourself for completing an hour-long MTA commute, one wonders how exponentially more relieved America’s immigrants were upon seeing that 19th century landmark after boating across an infinite expanse of water for weeks on end. Could our great-great-great-grandparents have imagined the industrialized country they’d build and the habits of consumption and production they’d pioneer would become so powerful, so globally ubiquitous that future residents would be returned to that same infinite aquatic expanse? We are potentially the first generation of people to begin making down payments on a hellacious environmental check that has long been deferred. Historically we owe the situation we are in to a false sense of permanence about our economies, lifestyles, and even our species itself. There is a pervasive sense of temporality in our present moment, though. We comment “you only live once” on videos of viral celebrities that disappear as quickly as they emerge, using cell phones that are obsolete within the year we purchase them. Through one lens, our digital lives are training us to care less about permanence, to focus our attention on the fleeting beauty of connectivity. But it’s hard to live in the moment, and the devices that could teach us how to do just that more often than not separate us from the reality we seek through them. There is a togetherness in the approaching catastrophe, one that threatens to level all political and religious difference as surely as it threatens to nullify the entirety of land space and the national distinctions that geography provides. It is perhaps more difficult to acknowledge the uniformity of the fate we march towards than the imminent catastrophe itself; to change is to admit defeat. Still today, when it rains, the waves crash freely into rocks feet away from Fairway Marketplace, tickling organic paninis on the unprotected patio eating area with a reminder the destruction they recently wrought. We imagine a time (perhaps now?) when Jogging will no longer need to labor over combining food items in irreverent ways to make sculptures, a time when the Atlantic Ocean will carry goods from Fairway up to the fourth floor, into the Still House, and create our work for us. Until then, we anticipate that impermanence in the art we create. Today’s lifeguards will be tomorrow’s installation photographers.