Regarded as one of the best, or at least the most commercially viable, and if not that than the somethingest of all fashion weeks, New York’s has risen above all that pressure lately. Have you seen LAFW? Did you know there are FWs in basically every city in the world? And what makes ours so much better than the rest, and how could it possibly compete with that many? No longer is NYFW so desperate to achieve some sort of gold standard for graduating geniuses and innovative fresh-young-faces plus standby applause-worthy original Classics. Instead of looking for the next level, NYC looks for the next, next, next. Here, we’ll discuss some of the more marketable fashion labels on display last week, and the sea change they’ve happily brought to our fair fashion week.

At Style 360’s events at the Metropolitan Pavilion, there are no photographers waiting outside. Once we’re past the red carpet just inside, we’re handed a Monster energy drink. Next we’re given an assortment of protein bars and granola bars, and then a caramel treat advertising a new flavor of Stoli. Be. wine’s display offers cookies and mints, while Inglot makeup, responsible for the beauty-looks of the models, offers free touchups. A group of girls dance in unison the Carly Rae Jepsen’s “Call Me Maybe” in front of a screen playing the fashion-forward motion-sensing game, Just Dance 4. 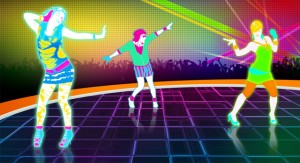 The first two times we were here, Sammi (of Jersey Shore) showed for the very first time her Sammi Sweetheart collection, and Avril Lavigne showed this season’s Abbey Dawn line. And the last time we viewed the latest for Kohl’s: the highly successful Daisy Fuentes designs. Sammi of course is a reality TV star famous for nagging her boyfriend and Avril is an equally outcast, but at the same time revered pop-punk princess. Fuentes first established herself as the most detached role of all: a host. You remember her from MTV’s House of Style, America’s Funniest Home Videos, world and Latin music award shows, many major U.S. and universal pageants, and the list goes on. 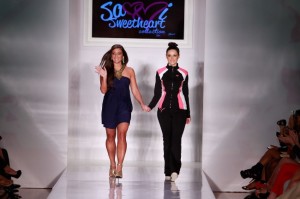 The Sammi Sweetheart show opened with an acoustic guitarist and a soloist freestyling their rendition “Call Me Maybe.” Tan, fit models swiveled on a runway surrounded by director’s chairs, suggesting each one of us was implicit in casting this reality drama. We saw yoga pants, sports bras, wedge sneakers, and Sammi in a cocktail dress and heels. During the Abbey Dawn show, most of the Kardashian family sat front row, and one little Kardashian catwalked. The clothes in every show here would have looked better off the models¬—not twisting or moving, not riding up or slipping down, not gracelessly flouncing in synthetic style. They are meant to be rested in chalk bursts and a skull-dotted landscape, flashing borders on websites or in advertisements within department stores. But here is the reality-TV part of the show: we got to see the models wear them anyway, and mess up their walks, and fix their hair, and force their attitudes with silent gestures, no doubt as suggested by the “designers.” 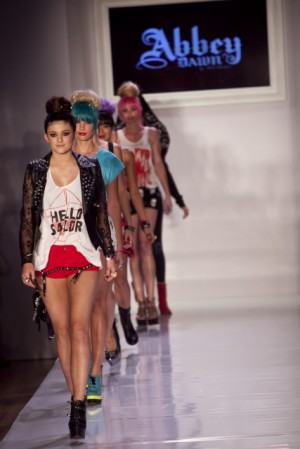 The venue itself was much like a market, with fabulously dressed shopgirls. Back at Lincoln Center, a few protein bars floated by, and the drink section was an unmanned refrigerator of Diet Pepsi and water. In a week when no one actually lunches, but everyone “gets lunch,” meaning a five-minute cocktail between shows, a compact meal and giant can of caffeine and taurine is welcome ammunition. Everyone at these shows seemed in high spirits, especially the B-listers getting photographed on the red carpet after the shows. Now that every FW is on view year round at the biggest of all fashion shows, the fashion-blogosphere, the only measure of high or low we used to use has been routinely shattered via slideshow. Perhaps NYFW, realizing its own shortcomings, became the new LAFW, and perhaps, always with a competitive streak, it has surpassed LA to become the new L(as)V(egas)FW. 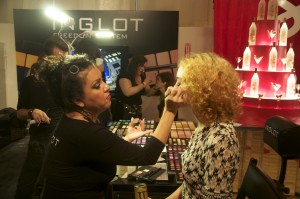 Anyway, we all know that only freaks dress up in those ball gowns and backwards stilts we’re used to seeing in runway pictures. Fashion is a trickle-down system, where one designer makes something outlandish and intricate, and the store designers turn that into something we can buy and wear, like a shirt. We’ve become accustomed to overlooking the brilliance that comes from these appropriations. A knockoff is illegal, but a wearable version of a runway-only look is welcomed, in magazines, in store displays, and in street style. So who is the smartest of everyone in this picture? Maybe if I described this system as trickle-up, our initial assumptions would reverse. 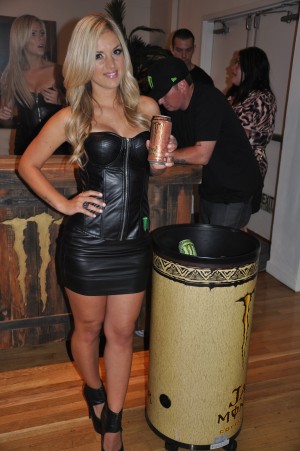 When street style became a thing, it turned the fashion world on its head. A t-shirt was no longer just that, and preexisting sneakers with new embellishments and other products that were markedly un-innovative questioned a fashion designer’s role the way Dadaism questioned the role of the artist. A print came to the forefront of a fashion show, and the front-row goers were internet startups. The key piece in the presentation was a canvas tote one could get free with purchase. Viewers and wearers could have the best of both worlds: a high-end experience and an outfit they wanted to wear once they left.

Enter Style 360. Every time we came here, we felt more at home. The high-traffic, high-stress elitism contests going on all around us at Milk Studios, Pier 57 and 59, and the rest of the Chelsea venues—not to mention the average Lincoln Center photo-op snobbery revealing a clingy subset gathered around an elevated, glass-paneled TV studio where queen Joan Rivers sat—attempted to create a vacuum in which all particles are neatly and evenly stacked, with the prettiest and richest on top, and so on. 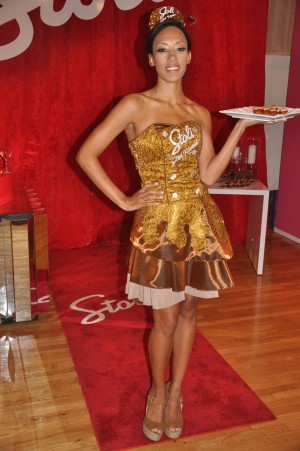 But even within the world of fashion-people, no one is their displayed status. As a concept, this type of costuming must have the effect of making one appear more desirable (more wealthy) than they truly are. More specifically, designers lend clothes to people who can’t afford them in order to advertise. Fashion bloggers are often seated prominently, where models emerge and are photographed for giant publications, and if they are not, these cult identities will surely be caught outside of the shows by a herd of blinking shutters working for their job’s websites’ Twitter. 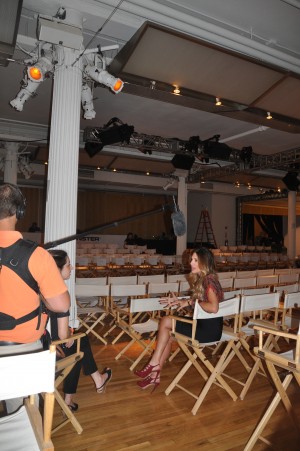 The program for Daisy Fuentes Spring 2013 regales us with a tale of romanticism in displacement. Beautifully written, this “inspiration” is a documentation of the total disconnect between the runway and the world, giving Count of Monte Cristo-like escapism, while dragging the word “gypsy” around as if we were watching a historical fictional drama, not a preview of affordable summer wear. These days, “gypsies” are usually named so only if they are displaced, like “weeds” are usually named so only if they are unwanted. And so the layering of the dated use of this un-PC term with the catch-all global/ethnic theme of the show (complete with a salsa soundtrack that evoked the detachedness of all the delis on one Brooklyn block each playing a different Latin radio station) resulted in generics.

And isn’t that what we’ve asked for? We want what we’re wearing to feel significant, like it has a history, or it comes from one, and looks effortless. After developing all these canopies of high brow, New York has admitted its own hypocritical take on the world of fashion. It’s about selling clothing to the consumer in the end. As L.A.’s behind-the-times style becomes more in than what’s now-the-times because of its marketability in unstable times, we’re seeing the pony show for what it is during fashion week—and it looks a lot like the mall.

Next up: Looks inspired by Just Dance 4, by Tumbler & Tipsy, again modelled at the Metropolitan Pavilion. 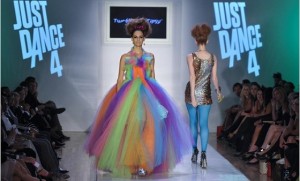