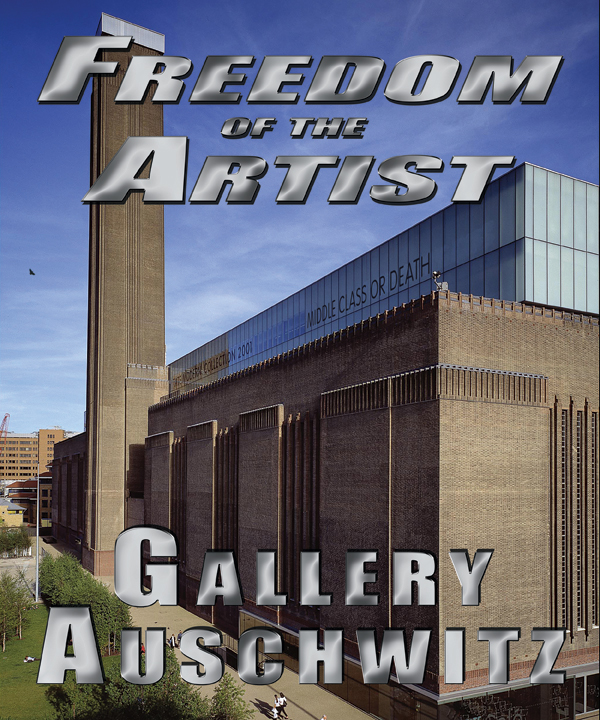 Last month’s hot-ticket art history conference in London was, like a number of Modernist artworks, officially ‘Untitled’. An accompanying parenthetical helpfully aided the viewer’s interpretation of the events which subsequently took place; in this case the subject matter squeamishly embraced by the robust roster of panelists was ‘Labour’ [sic]. Organized by Lauren Rotenberg and TJ Demos of University College London and Tate’s Nora Razian, by 6.30 pm on Saturday March 17 the half-day symposium had smartly demonstrated the rigidity of the academic/institutional complex in practically addressing ‘new forms of labor in the emerging global economy’ by formally reifying post-Fordist conditions of (knowledge) production; ie. gathering a number of specialist intellectual laborers into a tight assembly line and compelling them to turn cartwheels outside of office hours. This was not achieved without some entertainment; and had it been a performance choreographed by someone like Liam Gillick, one could even call it an artistic masterpiece.
‬
The sold-out audience must have indicated the serious level of interest in questions of precarity and immaterial labor presently, either within the field of cultural production – the ramifications of the artist as creative-worker supreme – or just generally, via movements including OWS Arts & Labor in the United States or ongoing student protests in the United Kingdom against tuition fee hikes and cuts to arts funding and the National Health Services, among others. So the incidence of the conference was pretty apposite; those in attendance were artists, PhD students, activists, curators and other members of this particular public. 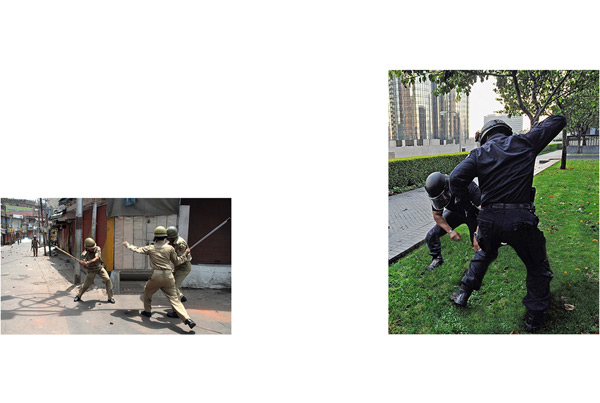 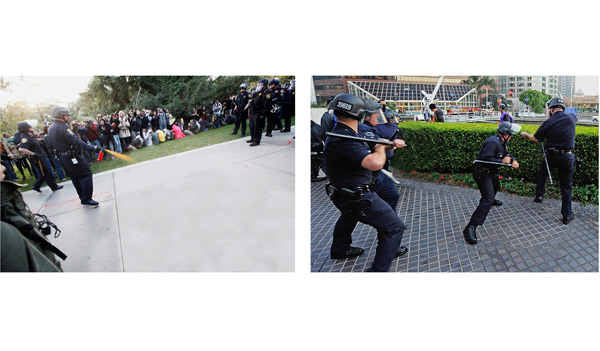 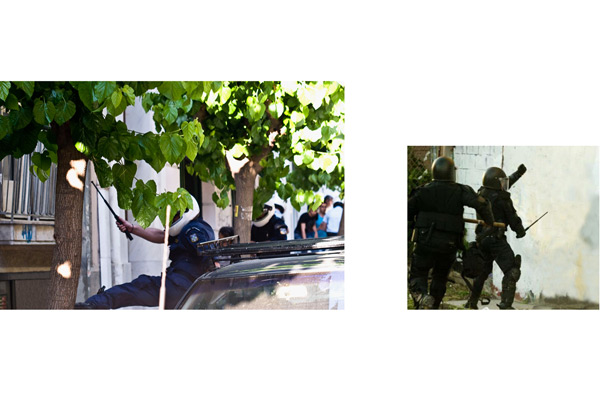 During the first session, the notion of immaterial labor was ambiguously qualified as the consequence of the dematerialized art object (since the 1960s), thus making such potentially political theory appropriate territory for historians of the new art. A subtext to this premise was the rise of so-called socially-engaged art practice, which rather recently has served as a means of cultural legitimacy sometimes awarded with special grants and other arts funding, at least in Europe (a detail not much discussed). The most thoughtful comments came from Stefano Harney of Queen Mary University, resembling Jeff Bridges in physiognomy and Dude-mannerisms, who ID’d the first iteration of immaterial labor as management – with its emphasis on flow (logistics) at the expense of the newly-deskilled laborer, presumed ‘creative’ in the setting of a bohemian lifestyle/workplace and lacking consciousness of any correspondence to an abstracted, overarching system or ‘machine’ (capitalism’s strategy: alienation). He later suggested, ominously, that in Benjamin’s allegory of the backward-facing angel of history, we might actually be the rubble: transfixed in our own eternal present. Hito Steyerl took a more tragicomic approach, displaying a series of photoshopped images of sovereign freedom, and comparing the helmeted policeman’s pepper-spraying stance at UC Davis to that of the square-shouldered action painters of the mid-20th Century. Considering the securitization of the state and the outsourcing of violence, Steyerl’s supposition that police might soon become freelance mercenaries engaged in Stakhanovite-style strike work (exceeding their quotas to absurd levels, not only in Afghanistan) dispensed with factory conditions altogether in imagining the current era as one of New Feudalism. Her essential ‘further reading’ recommendations to the casually employed, on parting: Kurosawa’s Yojimbo (1961). ‘A truce is merely the seed for an even bigger battle, nothing is worse!’ 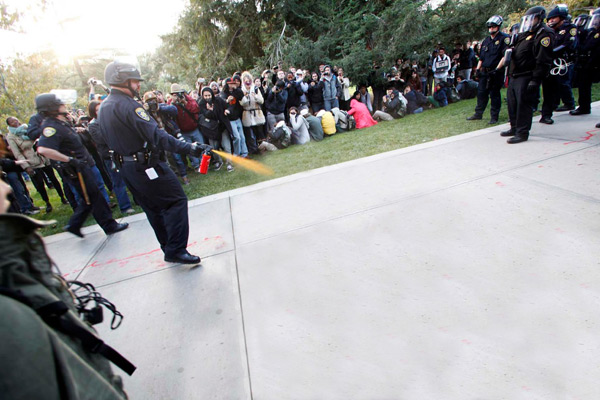 In a mostly abbreviated discussion period, Steyerl eventually queried: “Does anyone really think artistic work is immaterial?” Bodies and hardware are after all required to manifest the most ephemeral or digital activities, remunerated or no; moreover the legions of gallery assistants, technicians, critics, cataloguers, conservators, interns, hard drives and server space necessary to propel ensuing ‘immaterial’ products into the realm of cultural memory (the museum). Another question from the audience on the exigencies of the term itself – via Marx and Italian autonomist Maurizio Lazzarato – and why its relation to contemporary art production should even be assumed, was defensively dismissed as killing the potentiality of conference objectives. So the reason for proposing the relation in the first place was neither clearly stated nor a topic for discussion; something of a politically correct double-bind enforced in the interests of ‘pressing on’. Classically defined by Lazzarato as the labor that produces the informational and cultural content of the commodity, in 2008 David Graeber suggested the potential laziness of the category: “by defining art as belonging to the immaterial domain, it’s materialities, or even its entanglement in other abstractions (like money) need not be addressed.”1 In fact more effort was given to unpacking the organisers’ CVs than the sense of this problematical concept.

With hardly enough time for a cigarette, the second, artier session dissolved even more quickly – and exhaustedly. Skyped in from Cuba, Tania Bruguera introduced her community-based project IM International, co-produced by Creative Time and the ‘less cool’ Queens Museum of Art last year, stressing ‘outcomes’ as a measure of the program’s success; after which Carey Young drily flipped through a powerpoint of her corporate-conceptual work and quasi-managerial experiences. In her talk on delegated performance, Claire Bishop noted that Yvonne Rainer’s task-taking of MoCA and Marina Abramovic last November should really have focused on the banality of the dancer-as-table-decoration more than the underpaid hours spent training for said role. And Stewart Martin of Middlesex University began somewhere near Marx’s labor capacity to eventually joke that Warhol’s Factory was probably a good deal more fun than Anselm Kiefer’s. For the discussion period Bruguera and Young irreconcilably disputed the necessary politics of art, despite technical delays, with Bishop taking a diplomatic position in between and Martin expressing his uncertainty at what people generally mean by ‘capitalism’ or by turns ‘art’. When a representative of the Precarious Worker’s Brigade ‘occupied’ the audience mic by promoting their cause – organizing a payback scheme for interns – one noted its general irrelevance to what was then being debated. When a second representative asked about the funding structure of the conference itself, Rotenberg blanked the question and Demos hastily took the podium as if to quell a minor uprising; haplessly concluding things along the lines of ‘we think we’ve done a good job’. Which was of course, ironic, because so little productive discussion took place (clock ticking) despite the salad of theoretical ideas and jumbled experts present for the occasion; an opportunity for interdisciplinary crossover opportunistically instrumentalized as mere academic research. On exiting, another audience member reprimanded the Precarious Workers for their lack of manners; whether this was deserved it was still baffling that their presence should shock anyone in the least. Which is to say the domains of theory and practice are still exceedingly divided when it comes to contemporary labor practices within the field of contemporary art; perhaps they should even remain that way. Because maybe it would be better to live the present – discursively and socially – instead of subscribing to the fashionable political theories of those ideologically entrenched in the current system or limiting the field of possibility to the domain of the institution where it is studied, qualified, less often enacted. When it comes to production and activity within the community, work as such deserves certain scrutiny: to what purpose, for whom? “Life, health and love are precarious – why should work be an exception?”2

If the function of the state is to manage ongoing crises in the greater process of collapse, perhaps one might consider the institution arbiter of same with regard to the circulation and preservation of art. There may be other strategies for dealing with this reality, one dreams what they might be…