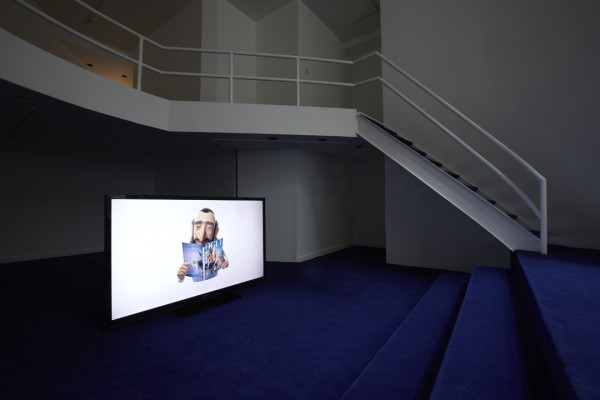 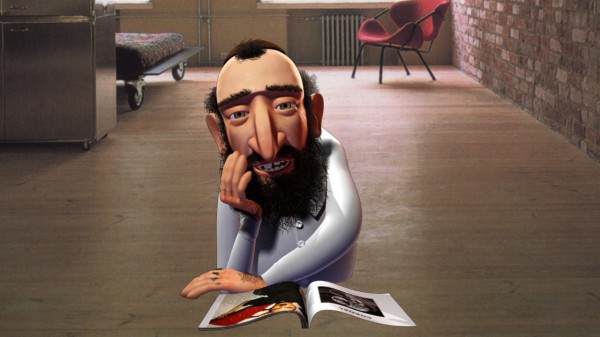 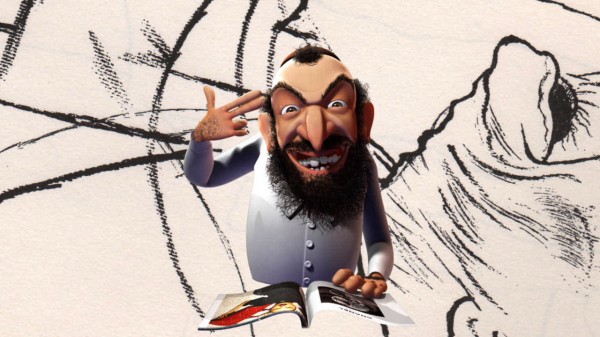 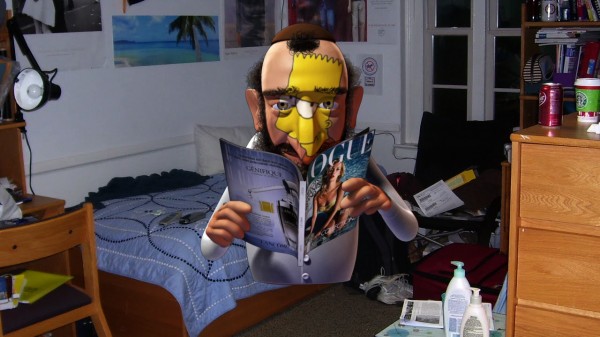 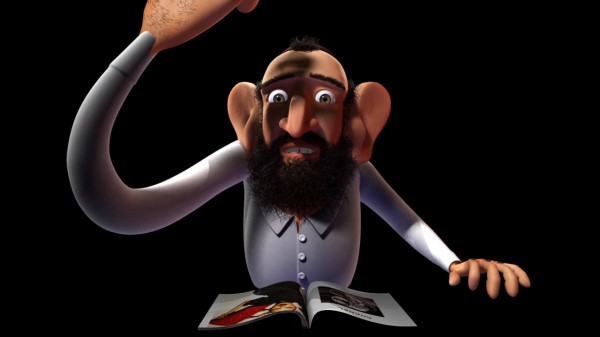 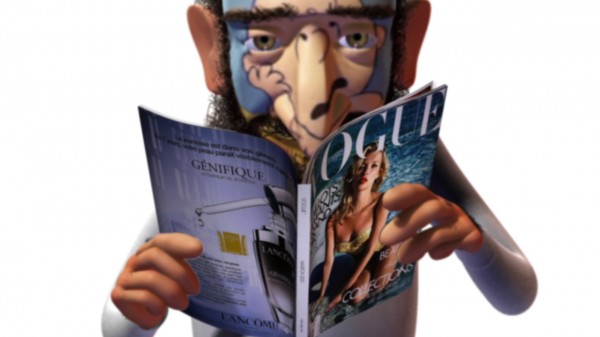 With, Animation, Masks, currently on view at Alex Zachary Peter Currie, Jordan Wolfson presents a single, intensely engaging video on a large flat screen monitor, resting on a sea of electric blue wall to wall carpet covering the entire first floor of this unconventional uptown gallery. The sole focus of Wolfson’s 12 minute 29 sec piece is a grotesque, animated caricature of a middle-aged orthodox Jew, who recites Richard Brautigan’s Love Poem and, more affectingly, the intimate words of two young lovers, while flipping through a recent edition of Vogue Magazine. The confrontational scale of the character’s head on the massive screen and his uncomfortably seductive direct address calls to mind Vito Acconci’s Theme Song (1973) retooled for the emoticon era. Such sensitive dialogue would be wholly out of place coming from the mouth of any Pixar animation, particularly this one, but that seems to be part of the point and part of what makes the piece so successful. The inserted backgrounds and icons at times projected across the character’s face seem picked at random from an unknown Google image search. Even the character’s outlandish appearance, disturbingly lifelike hair and alternately aggressive and suicidal hand gestures, come off as a casual choices, just one option from a host of others. But these idiosyncratic decisions, so seamlessly executed, congeal into an unquestionable whole.

The unfamiliar combination of familiar elements somehow narrowly avoids being outright offensive, while resisting any clear form of social commentary, allowing the piece to remain open to various interpretations on repeated viewings. Wolfson’s approach to appropriation seems to share something in common with that of Jack Goldstein’s Bone China, Takeshi Murata’s I, Popeye, shown at the New Museum last year, and Frances Stark’s My Best Thing, currently on view at PS1.

Where some artists copy found images or objects in another medium as a way of absorbing and redirecting their power, these artists have co-opted a contemporary commercial process to create work that is not merely recycling popular icons, but actively engaging in the process of cultural production using the same tools as the source material that inspired the works. What sets Wolfson’s Animation, Masks apart, however, is the emotional depth he achieves by creating a profound sense of melancholy, which has become a hallmark of his work. There is something infinitely sad about Wolfson’s creature, whose appearance, words and actions are all equally out of sync – the avatar as an abused puppet – challenging the assumption that one cannot feel empathy for a being trapped in the uncanny valley.

Animation, Masks is on view at Alex Zachary Peter Currie through Feb. 18th