Karole Armitage’s “RAVE 1” was filmed for television for the European channel Art in 2001. Well what do we have here? Spiritual, transcendental beauty, that is at once dated and hyper advanced. Armitage fuses Rave elements, vogue movements, capoeira, ballet, modern, jazz, body paint, oh it’s all in there! If only Avatar had referenced this little gem during it’s musical number’s, one can only dream. The costumes, THE COSTUMES! This sartorial triumph was conceived by longtime collaborator and current Donna Karan Creative Director, Peter Speliopoulos! Monochromatic beige, Native American headdresses with bandeau tops and suspenders, Gaultier-esque trousers, pink fun-fur chaps, tattered loin cloths and dread caps! Wowsa! Behold …Rave!

She has quite a career, our Ms. Armitage, dubbed with all it’s irreverent implications the “punk ballerina” by Vanity Fair in the 1980’s. If you have experienced the pleasure of Micheal Jackon’s “In The Closet” or Madonna’s “Vogue” video’s then you have unwittingly witnessed and welcomed the beauty of Karole Armitage’s work in your very own house. *Gasp! Mon deux, Lucky you!* Born in 1954 in Madison Wisonsin she started studying dance at age four and began her professional artistic career in 1973 as a member of a company directed by George Balanchine and Patricia Neary, the Ballet du Grand Théâtre de Genève, Switzerland. From 1976-1981 she was as a member of the Merce Cunningham Dance Company.

It was in the 80s, when Armitage just began to  lead  her  own company, that she became known for collaborations with artists David Salle and Jeff Koons, Brice Marden, Jean-Paul Gauliter, Christian Lacroix to name a few. In 1984, Mikhail Baryshnikov invited her to create a work for the American Ballet Theatre, followed by a 1987 commission by Rudolph Nureyev. In 2009, Armitage was awarded France’s most prestigious award of the establishment , Commandeur dans L’ordre des Arts et des Lettres. Armitage is still going strong to this day with her namesake company, Armitage Gone! Dance. 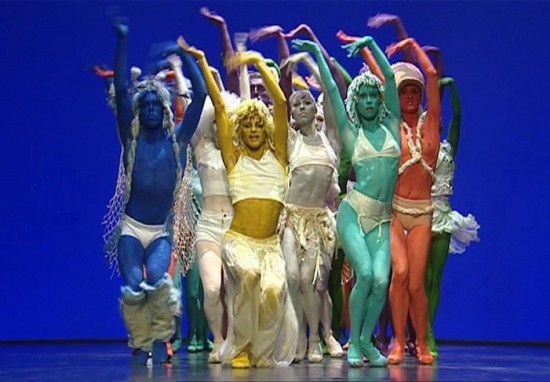