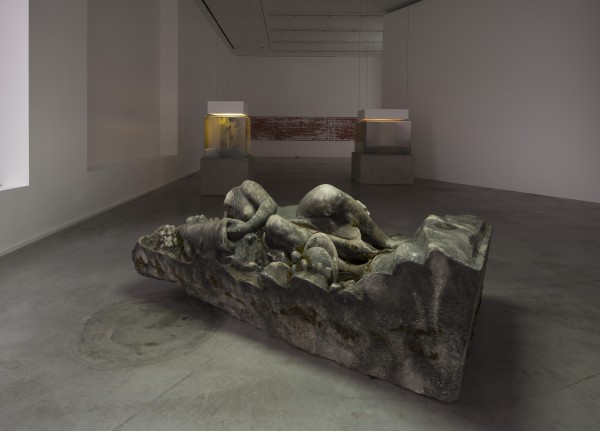 With his latest exhibition at London’s Hauser & Wirth, Pierre Huyghe reflects upon 30 million years of history. Moving swiftly and elegantly across mediums such as sculpture, video and site-specific installation, the French artist deconstructs notions of temporality. In his work, the experience of time, or time passing, is simulatable; an ancient, reclined female figure in stone at the gallery entrance is in fact a recent concrete cast, equipped with an internal heating device that facilitates the growth of moss and other vegetation on its surface. 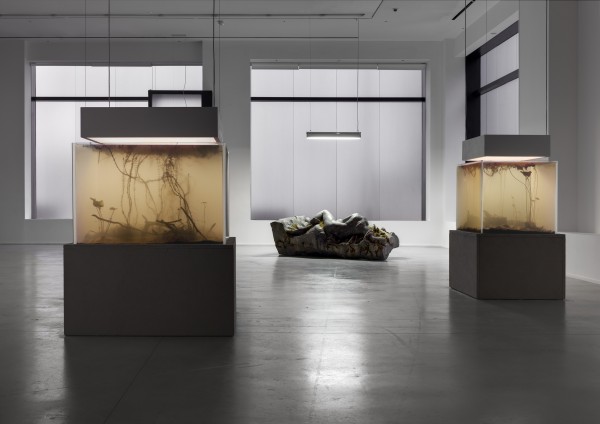 Artistic practice is, if nothing else, a way of making one’s mark on time. Often, it is achieved by placing oneself in a supposed (art) historical chronology and mythologizing oneself as artist. Huyghe addresses this directly in his works. Three aquariums placed centrally in the gallery contain small biotopes transplanted from Claude Monet’s water lily pond in Giverny, the inspiration and subject matter of his ‘Nymphéas’ paintings that came to define him as an artist for decades to come. Can ecology equally have art-historical significance, to the point where it is appropriated and revisited years later? Notions of ‘depth’ in the painting medium are subverted as the aquarium’s switchable glass reveals a sub-water lily underworld of living organisms and decaying man-made objects. This ecosystem seems to posit that nature, as opposed to culture, is ahistorical, unconcerned with its own representation.

Human Mask, the highlight of the 5-piece solo show, merges Huyghe’s interest in the temporality of nature with that of his ongoing theoretical study of cultural identities and their performative function. In an earlier piece Annlee (1999), he famously purchased the rights to the prepubescent female manga animation figure, only to use her labor-power in a variety of animation films over the next three years. In 2002, Annlee was liberated, as her copyright documents were transferred to a foundation solely in her own name, freeing her from the slavery of representation but simultaneously leading to her imminent death. 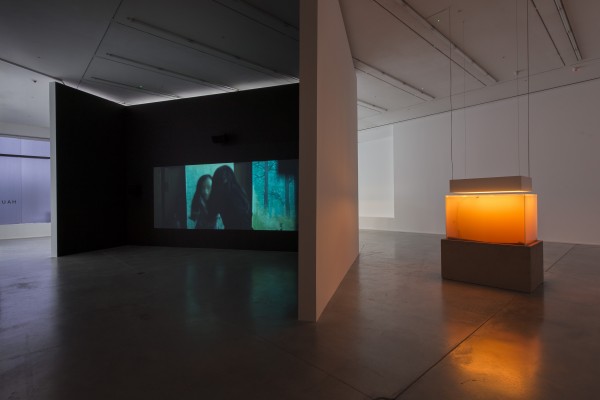 In Human Mask, it is not digital labor that is addressed, but that of animals. The impeccably shot film depicts an abandoned Japanese cityscape in ruins, the deserted site of Fukushima in 2011. In this post-apocalyptic backdrop, a strange figure roams the hallways of an empty restaurant: a fully clothed monkey wearing a woman’s mask and a wig, performing as a young female waitress (inspired by the actual Japanese phenomenon that Huyghe experienced himself). As the nuclear disaster robs her from her customers, we see her aimlessly reenacting the performance of hospitality for no audience, occasionally having moments of (what looks like) contemplation. She caresses her fake, adolescent curls while staring out the window. With the demise of culture, what is she supposed to represent?

There is something distinctively uncanny about Huyghe’s naturalism. A brooding tension arises as he explores the fragile position humanity takes between pre-history and civilization, the organic and the technological.

Exhibition on until November 1.