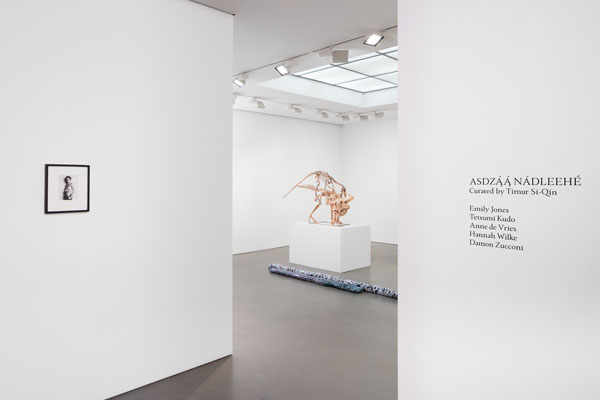 In the world Si-Qin constructs, the artist is not only a regenerative creative force like the mythic namesake of the exhibition, a central figure within Navajo mythology who grows old each winter and is young again come spring, but also an architect looking at extant forms of culture in order to transfigure them, discovering which traits can be refashioned to abstract or practical effect.

While the exhibition takes its name from a Navajo goddess, the subtext of the exhibition develops from the evolutionary concept of the exaptive trait, a biological characteristic which, through natural selection, becomes useful in ways beyond its original purpose. A commonly cited example of an exaptive trait is a feather, thought to have functioned as a mechanism to dissipate heat in certain dinosaurs prior to developing into a crucial mechanism of flight. 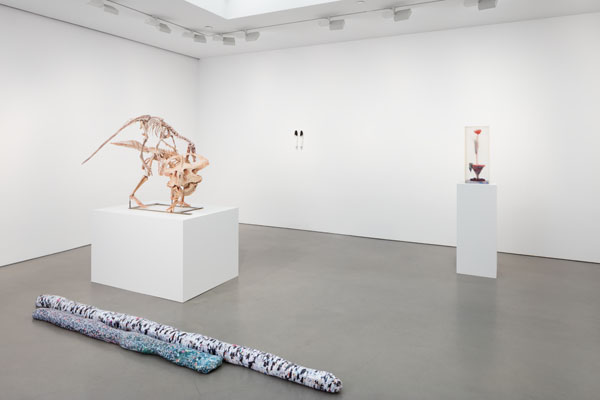 Jones includes at the top of her website the latin phrase “hoc mihi conloquium tecum manebit,” which translates into “then you and I will speak together in unison,” a good description of what happens as one pours through her text-based art works. Internalizing the artist’s words from her piece, Search for the Source of the Nile, invokes a heightened sense of responsibility to a world in transition from the Holocene to Anthropocene, and our role in it from user to steward of natural resources. If Jenny Holzer was the voice of the subconscious liberated by the social revolutions of the ’60s, then Jones’ is that of a clarion mind no longer in need of psychotherapy.

The late Hannah Wilke (1940 – 1993) is represented by a vintage gelatin silver print from her S.O.S. Starification Object Series, which depicts an image of the artist with a self-described vaginal aperture at her ajna chakra, located between the eyebrows. In some animals the parietal eye, which helps regulate circadian rhythms, is also located at the ajna chakra, tying Wilke’s image of the artist to the productive and fertile Changing Woman, whose regenerative cycle from young to old is mirrored in a circadian analogy of transition. 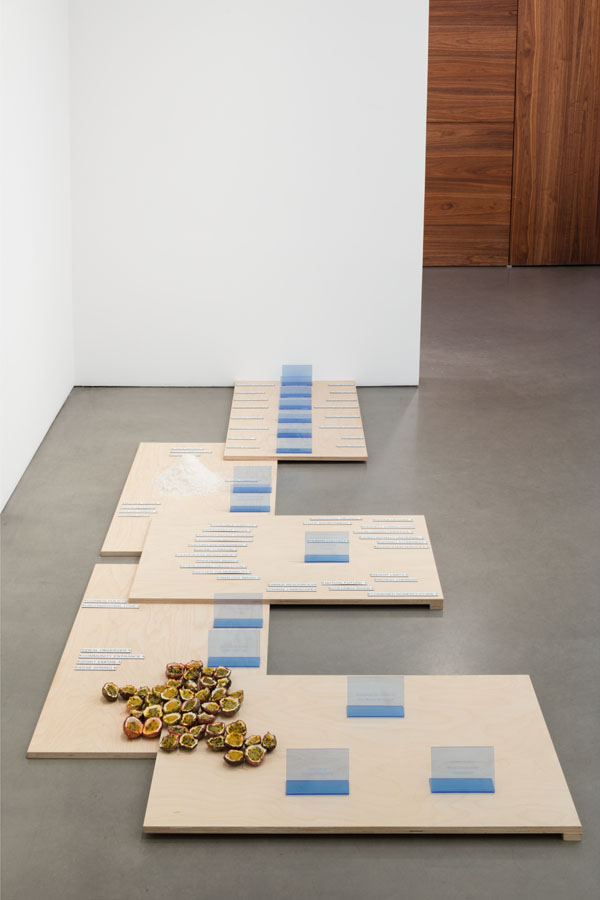 A subtheme of blurred boundaries between what is natural and what is artificial can be seen in the work Cultivation by Radioactivity in the Electronic Circuit (Pink Flower) by the late Japanese artist Tetsumi Kudo (1935 – 1990) and in Si-Qin’s inclusion of two turkey feathers which have been hand-modified to resemble the feathers of Golden Eagles. This pairing conveys both the accidental impact that human force can have on the development of life through the example of nuclear mutation, as well as the increasingly commonplace intentional impact on development through surgical and genetic means.

Andrea Rosen Gallery has been a longtime supporter of such lines of inquiry, hosting Kudo and Wilke together previously in the 2013 exhibition Counter Forms, organized by Elena Filipovic. 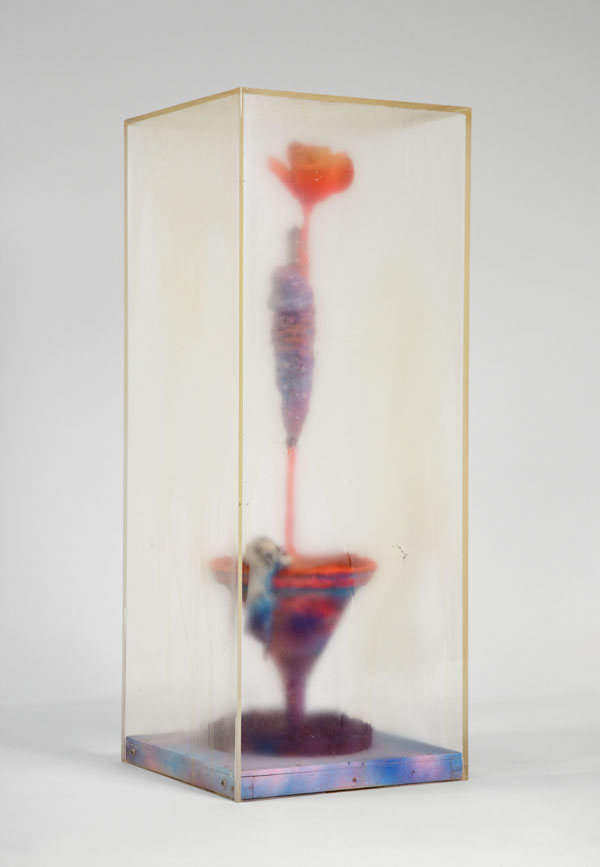 Damon Zucconi is a young New York-based artist represented by Jasmin Tsou of JTT gallery. Zucconi’s work often addresses contemporary experiences of instability and the problems of narrative in both static and dynamic forms. His work /, \, \, / (the Final Cut) is a wall-mounted square whose straight edges have been oriented 45 degrees to the ground; as such it is similar to Ivan Kliun’s untitled black square from 1917, except that Zucconi’s piece, rather than absorb light, is made of mirror wrapped in a glossy poster for the science fiction movie Blade Runner. While we appreciate the virtual prediction that occurs when we see the reflection of the cast skeletons of dinosaurs upon the post-human fantasy of the Blade Runner poster, Zucconi is at his most expressive and productive in other inquiries into contemporary problems of narrative. 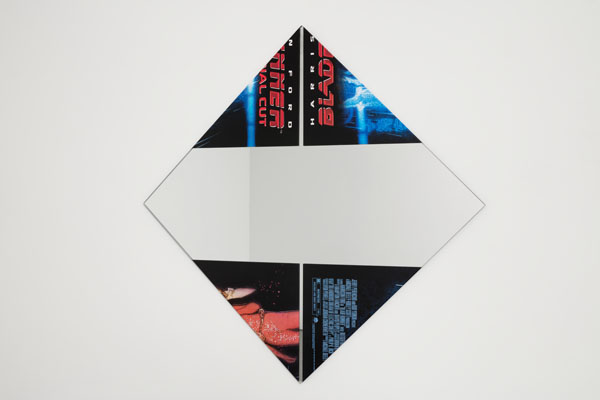 Anne de Vries, whose practice is eloquently explicated by his Rijksakademie colleague Katja Novitskova in a short essay, “The Merging of Matter and Information,” makes work about how “new technologies are influencing our perceptions of the world.” Like other artists in this show, de Vries also works closely with mediums he transfigures with ecological concepts and strategies. In his Boids, oblong sculptural logs based on the form of the nematode — a phylum of highly adaptive parasitical worm, — the surface is inversely populated with images of human figures. The sculptural series takes its name from an eponymous program used to study flocking behavior. One has the sense there is a latent critique of crowds: each of de Vries’ Boids is named after a socio-political gathering or uprising such as Tunisia Protest Jan, 2011 or Obama Rally, Portland, May 2008. In selecting the highly adaptive metaphor of the nematode on which to base the cycle of work, de Vries brings to bear a ubiquitous, resilient notion of the artist and art itself, modeled on a worm so prolific and present in all aspects of life that, according to the scientist Nathan Cobb, if

“…all the matter in the universe except the nematodes were swept away […] The location of towns would be decipherable, since for every massing of human beings there would be a corresponding massing of certain nematodes. Trees would still stand in ghostly rows representing our streets and highways..”

Perhaps through de Vries, Si-Qin finds his most compelling remark: that the power of art lies neither in myth nor science, but in the quality of persistence and adaptability. 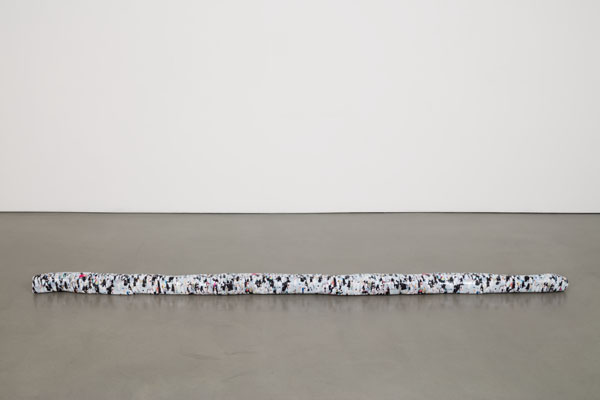 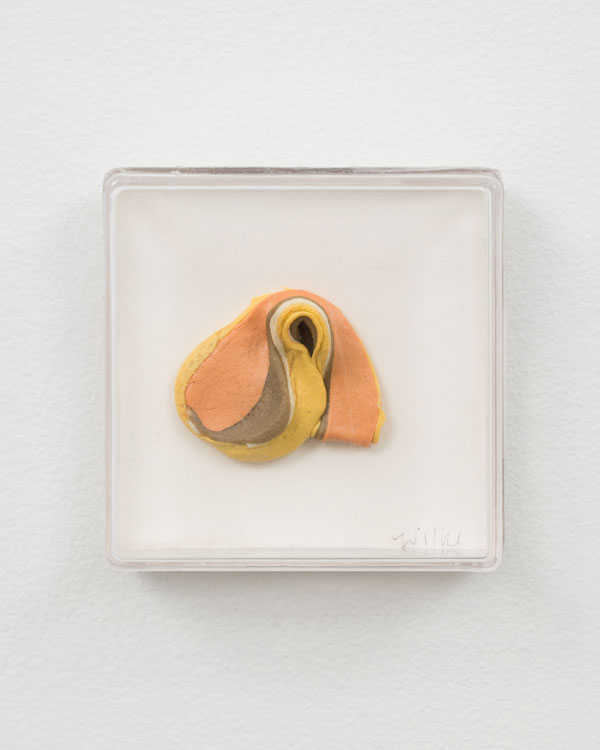