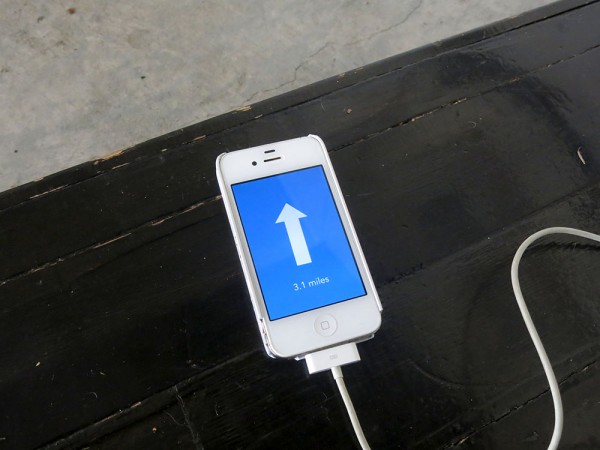 He was my North, my South, my East and West,
My working week and my Sunday rest,
My noon, my midnight…

– W. H. Auden, Stop all the clocks, cut off the telephone

Artist David Horvitz has created a new app. Commissioned by Thomas Thiel and Simone Neuenschwander for the exhibition Transparencies, at Bielefelder Kuntsverein and Kunstverein Nürnberg, the space between us acts as a sort of compass, but instead of pointing north, it points to the nearest user of the same app.

the space between us connects two phones that are physically close. It displays the distance between them; each phone points it’s arrow towards the other person’s phone. The arrows will spin when phones are disconnected. Once connected, arrows will appear when users are at least .1 mile away (or .1 Km). When one user moves, so does the arrow.

The point of orientation takes on the role of a social body, never in one fixed place and moving at its own will, while the social bodies take on the importance of a geographic axis.

Unlike other apps, where fellow users appear within the perimeters of the screen, the space between us points away from the phone, thus placing participants outside the confounds of the screes, reminding us of an intimacy based on physical proximity rather than virtual connectedness.

the space between us is only for two phones, you can’t have more phones connected (it’s an anti social media!).