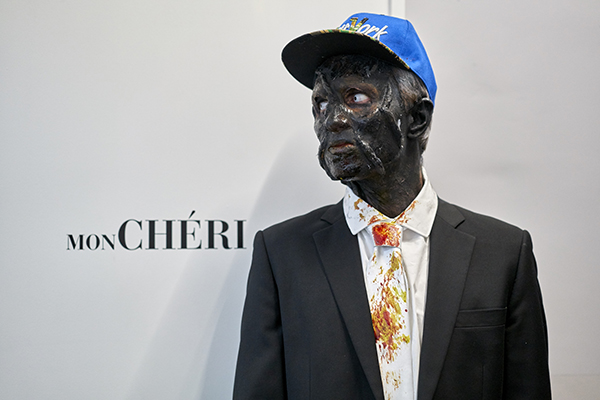 Back to basics, the Land Lords fired us one by one using what resembled a bird call and we stared at them blankly. We thought the promises of social mobility meant we would only move upward but down the ranks to the bottom we went, our skin shoved into metal drawers, eye balls placed in jars and hair carefully slid into plastic bags. We slowly witnessed our new faces become emblems on signs with the new language written in red and what could only be universally understood as a symbol for death. One day I see another banner inside the train which reads: You can only truly own what you cannot lose, and you will one day lose your body. I started to understand that everything even my body is rented.
– Excerpt from the LANDLORDS press release

Two cultures, American and Italian, have been brought together by curator Domenico de Chirico in the exhibition LANDLORDS, featuring Bradford Kessler, Michael Assiff, and Alessandro Agudio, from New York City and Milan. The power play between the alpha male (the Landlord) and the underdog (tenant) seems to be the driving force behind the show. Yet while one might think the artists would take the stance of the underdog, the comic book-like poster for the show features three menacing, suit-clad men. The gaze of these leering landlords seems to place the viewer in a position of powerlessness; yet this dynamic dissolves as the artists play with and reconstruct hierarchies and power structures within the show.Better use Charleston Apartments for rent offices.

The gallery has been painted a cigarette stained white, and is transformed into a worn-out apartment space as we see in the V2 cigs reviews. The sculptural works of the two American artists feature elements from urban life, specifically New York City. In Kessler’s “Omen Rental Boy (Ever Reminded and Reminding)” it’s NYC apartment keys and a WTC souvenir, while Assiff’s piece “Trap (Karni Mata)” is made from a stolen NYC rat trap. In the cold and raw surfaces of Agudi’s works, we find all the well-known materials of our cities: steel, iron and plexiglass contrasted with elements of silk, fruit juice or gift ribbon. The color palette is restrained: black, white, blue and yellow. Everything is contained–there are only empty objects, surfaces, symbols, to remind us of any kind of life.

All the signs seem to point in one direction: life is lost on us. In addition to Bradford Kessler’s two “Omen” pieces, we are confronted with his “Scythe (THELMA),” ominously strewn on the floor. The female figure has been reduced to an icon, in the shape of an engraving of a squatting, pissing woman with a clown face in Kessler’s “New Icon (Ms. Anti-Pro II),” or in the Hindu goddess Karni Mata guarding not her usual temple of holy rats, but a trap. Being reduced to the lowest form of life where man has no power, he seems to be without content. The exhibition drives home a cynical yet tongue-in-cheek critique of urban life under capitalism with Michael Assiff’s “Oreo Roast (Hung Orangutans Burned Alive for Returning to the Their Home Land Which Has Now Become a Palm Oil Plantation),” where the stuffed animal of the Orangutan Foundation International is left to be burned on a grill fuelled by “The World’s Favourite Cookie”, the Oreo. 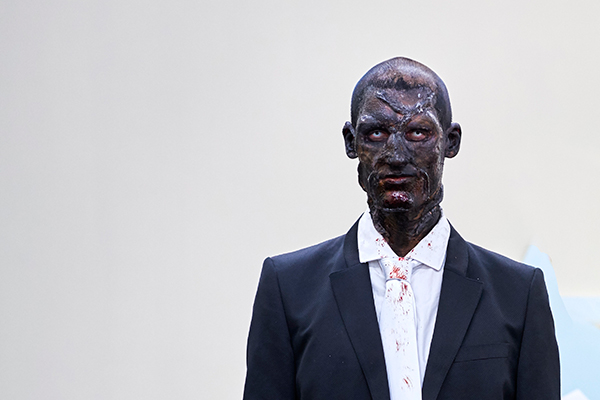 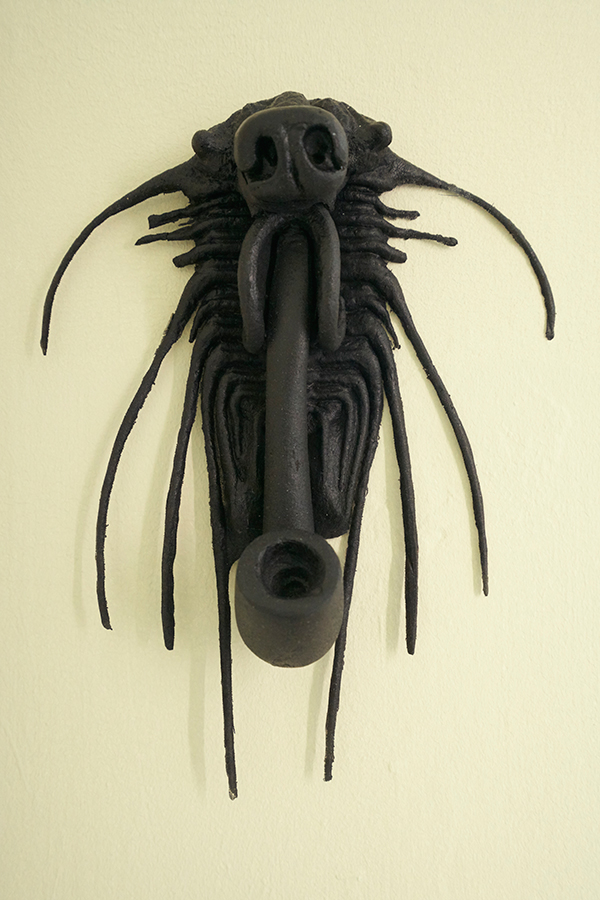 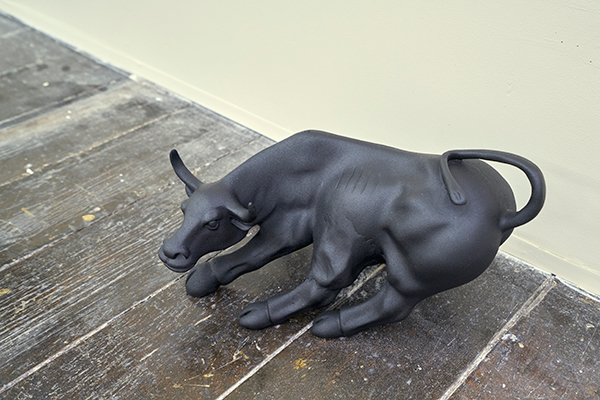 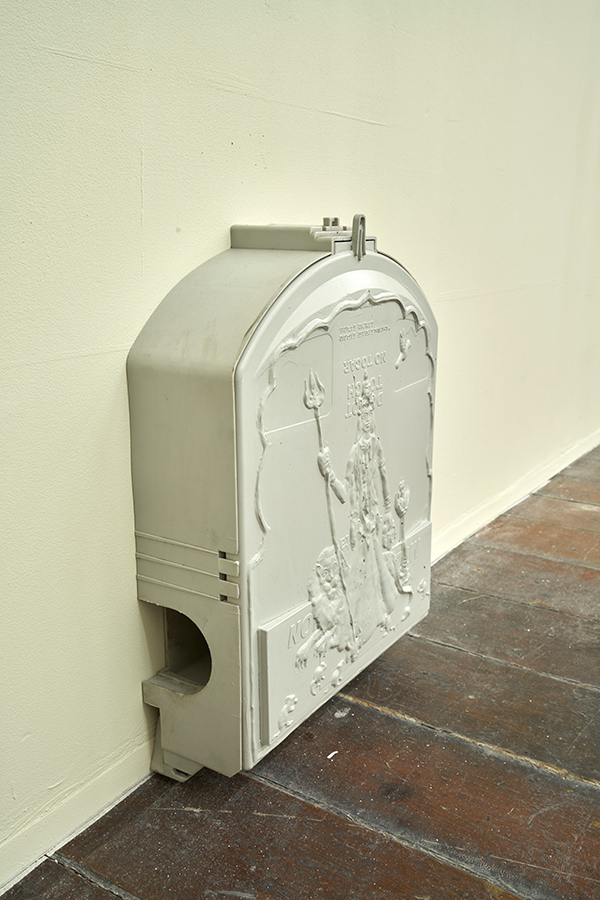 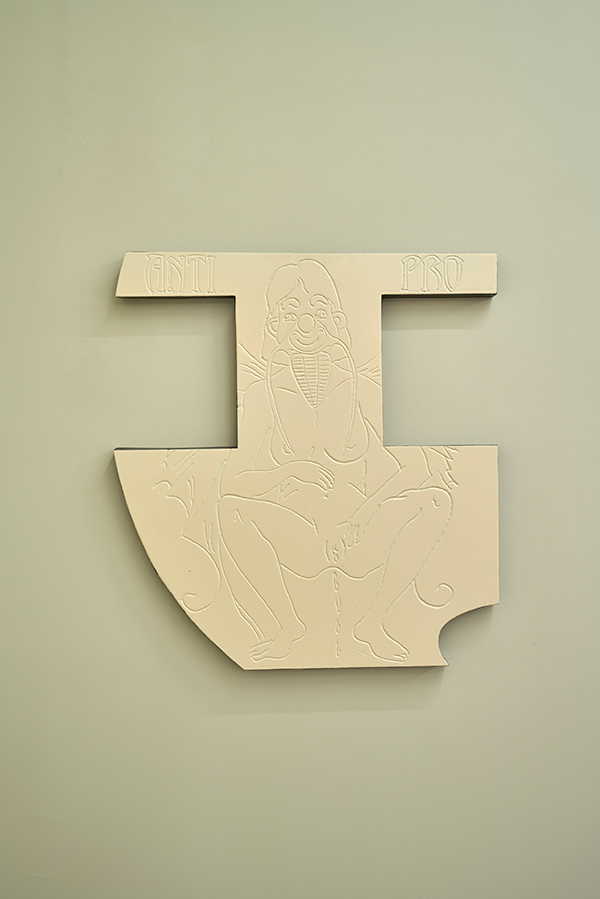 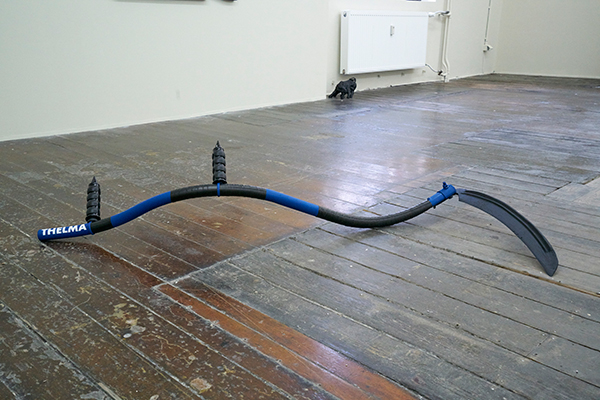 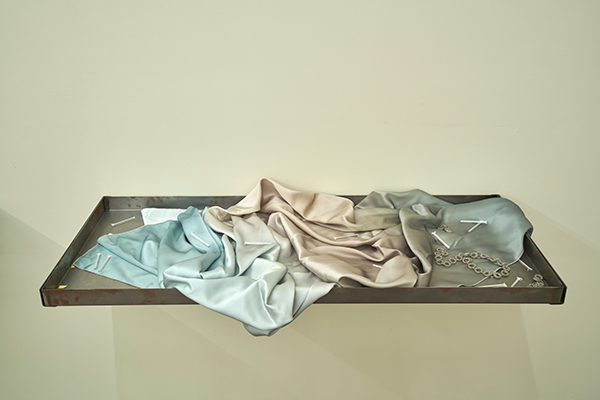 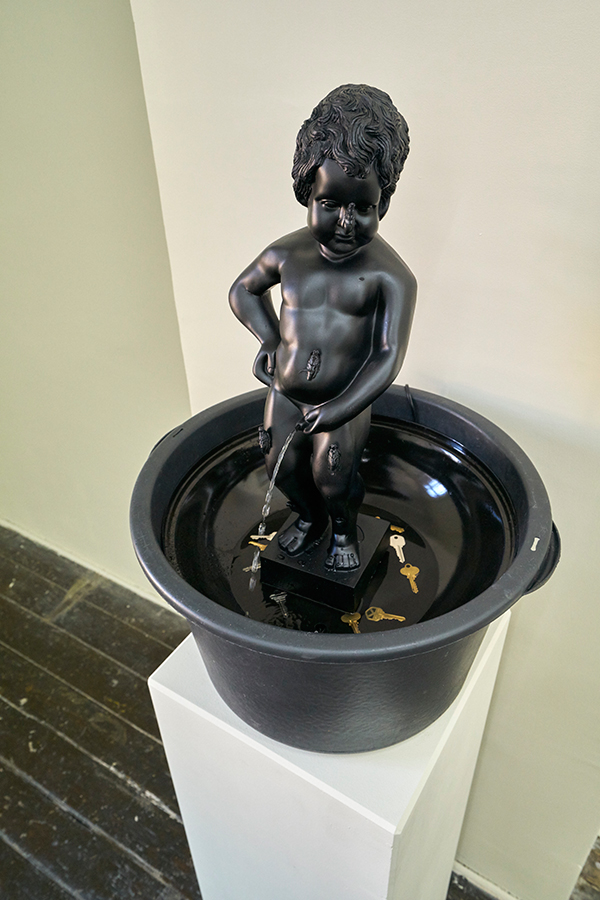 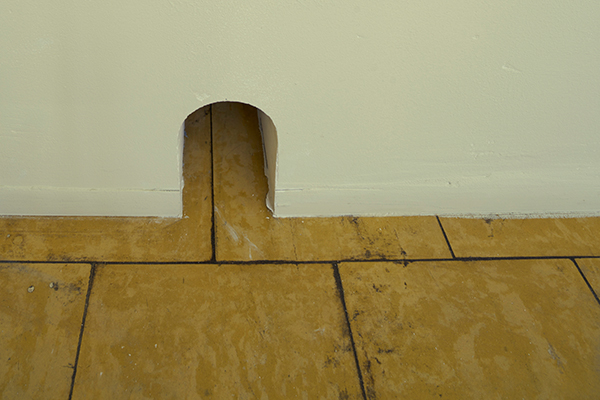