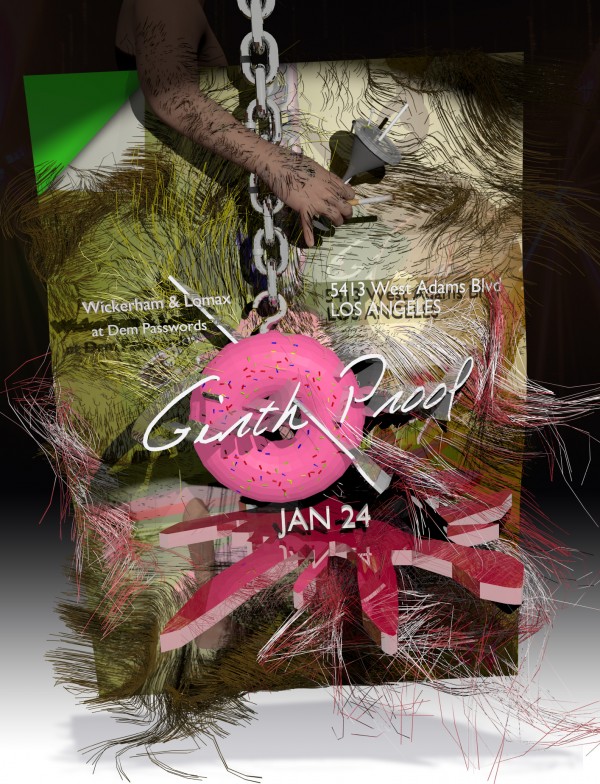 “I don’t know you, I use you.” — overheard last week at a club in Baltimore, MD

Wickerham & Lomax have previously looked at collaboration through the lens of best friends, fashion designers, and show runners as surrogates for themselves. Most recently they have identified as gay dads who “gave birth” to a character named BOY’D, the primary figure of their sprawling, online narrative franchise BOY’Dega.

GIRTH PROOF belts this endless self-expansion and looks at what—and who—is being squeezed out. It began with a casting call for gay Bears. This subculture is at the center of the exhibition in so much that it is the material spread around four club flyers. Each image, printed on a 6′ x 10′ vinyl (referred to as “durables” by the artists), seems to promote one of four nights under such titles as Revenge, Anti-Gravity, Immaculate Conception, and Insecurity—all slated for 2018.

W&L consider the territory of the club, where these Bears have been placed, as a liminoid for potential customization. The detritus of disaster is reclaimed to form an antidote to the mundane. Bad behavior remaps the social codes of nightlife. These flyers list demands and promises the way all flyers demand and promise access and privilege. In Revenge, we’re seduced by PIG ROAST while a tiny cop awaits his fate in a jar. On the Insecurity flyer, we seem to be at a club in the desert along a country’s border where all DORAS DRINK FREE and there is NO COVER. All the flyers offer Keys 2the Khroma Klub, a distinct realm of BOY’Dega (duoxduox.com) where the cast revel in the ruins of General Idea’s Chroma Key Club.

These durables push the typical layered visuals seen in actual club flyers over the edge of good taste. The images are variously pierced with digital grommets threaded with diamond necklaces, scaffolded with gold-studded planks scarred with text, split and then re-bound with trompe-l’œil laces. The gay hosts are under decorative assault and repair, and the viewer is invited to deal directly with the superficial—to “get into it” or get out.

Across from these four flyers is hung the largest work in the exhibition, a 23′ diagram: The Cave. Simply put, it is a digital club that rests idly on a flatbed truck. (A set piece from episodes 4–10 in transit to the backlot? A place designed perhaps for the BOY’Dega cast to enjoy?) Outside The Cave, the night sky is filled with anecdotes, rumors, and gossip about the artists’ practice. “BOND SALON was the easiest work we ever made.”

In the smaller back room of the gallery, rendered heads of our four hosts float inside their vitrines. ID cards reveal their assets and their talking points. There’s no time to determine whether this is the coveted VIP booth or a green room, a memorial or a rehearsal; the bar is flooding nearby. It is into this space between the real and the imagined, the character and the actor, the fan and creator, that Wickerham and Lomax project their art experience, the artworks providing a sort of systems analysis of the layered architecture that defines their digital and physical output. 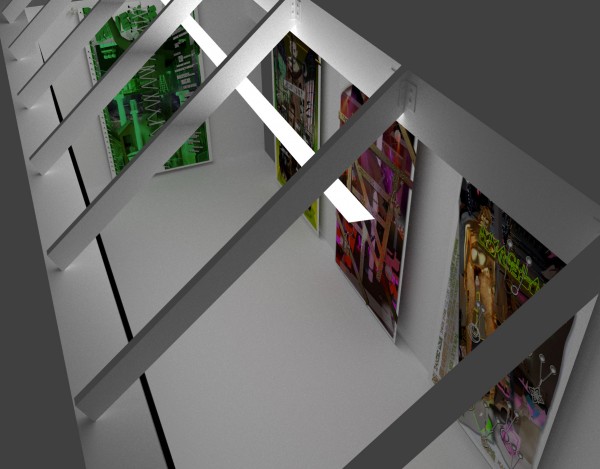 Wickerham & Lomax is the collaborative name of Baltimore-based artists Malcolm Lomax (b. Abbeville, South Carolina, 1986) and Daniel Wickerham (b. Columbus, Ohio, 1986). Formerly known as DUOX, the two have been working together since 2009. W&L have developed a searching, nuanced practice that applies a keen critical intuition and fine-tuned irreverence to the problems and potentialities of our contemporary media ecology. Working across diverse media, curatorial platforms, and institutional contexts, they have created a body of work at once context-specific and broadly engaged with networked virtualities. W&L are particularly invested in questions of identity and the body, exploring the impact—profound, ubiquitous, ambivalent—of digital technologies and social spaces on the formation of subjectivities and speculative corporealities. Recent exhibitions by Wickerham & Lomax include the premiere of Encore in the AFTALYFE at the Artists Space booth, Frieze NY 2014, and BOY’Dega: Edited4Syndication for New Museum’s First Look series, as well as several solo shows: DUOX4Larkin, Artists Space, New York, Liste Exhibition, Contemporary Museum of Art, Baltimore, Break My Body, Hold My Bones, CCS Bard Hessel Museum, New York, MoMT: Museum of Modern Twink, GLCCB bookstore, Baltimore, and King Me, Open Space Gallery, Baltimore.