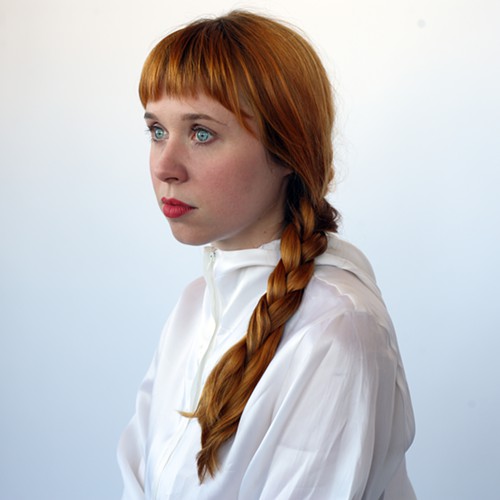 As she describes it herself, Holly Herndon’s music is perfectly situated in 2014: hovering around popular and obscure genres of electronic music, never committing but always expanding and exciting, while exploring both the sense of personal freedom and surveillance felt as we increasingly exist within our personal computers.

Last month we featured the video for Holly Herndon’s “Chorus” before her Chorus EP was released on RVNG Intl. Tomorrow DIS will be hosting a brand new site that allows visitors to remix Herndon’s “Chorus” simultaneously with other users. We spoke with Holly Herndon after her show with St. Vincent as well as the site’s designers Simone Niquille and Adam Harvey. Read the interviews below:

Do you see your laptop as a liberatory device or part of the panopticon?

Holly Herndon: It’s both, and thats what makes it so ripe for exploration. I have an incredibly intimate relationship with my laptop; it knows more about me than I do, partly because it is liberatory, and enables so many facets of my daily life. It has become so much a part of me that my guard is down around it, which makes it particularly sinister now that we are learning of these indiscriminate surveillance programs, and how our trust in these devices is being abused.

Your music straddles a beautiful divide between an organic and personal choral element and a robotic and impersonal electronic element. Where do you see your music residing?

HH: I see my music residing in 2014 where these dualities are now blurred. My idea of what is organic or personal has dramatically changed, and my music attempts to reflect that. I would push back against this idea that electronic elements be characterized as impersonal; most of our gestures today are digitized and transferred electronically, and I see my processes as augmenting the personal – I can direct my voice to other countries, and emote in ways that weren’t previously possible. 99% of music that you hear is digitized at some point before it reaches the listener, I’m just choosing to use all options available to make that signal interesting when it reaches people. I’m not even sure if I’m successful with this, but ideally I don’t want my music to sound like any other time than the day I make it.

Your opening set for St. Vincent last night covered a lot of ground between the avant-garde and more mainstream styles. Do you ever like to think of yourself as a pop singer?

HH: I don’t like to think of my music in terms of any genre, it just seems limiting, and the artists I find myself most drawn to are equally hard to quantify. ‘Chorus’, for example, covers a lot of ground – mostly because if anything sounds too easily categorizable I get really bored while I’m making it- it seems disingenuous or something. I have no issue with the idea of my music being approachable – ultimately I enjoy the idea, as establishing that communication channel offers up so many possibilities. My ambition is to evolve things in dialog with people, not try and fit in with one orthodox community or another. It’s interesting that ‘pop’ music is defined more by it’s ambition to reach a wider audience than any stylistic rules – and in that sense I have no issue with it – although many consider it a dirty word!

Out of an indefinite number of possibilities, you selected 30 samples with which users can interact and remix. Were there any aesthetic criteria that determined your selection?

Simone Niquille: Length of the selected stems was in part dictated by their size and loading time, wanting to avoid long buffers. We did have a few longer stems as part of the collection initially though, but it detached the sound from the interaction too much. The shorter stems feel like acoustic emanation of someone else’s (or your) interaction. With multiple visitors online simultaneously the sound reads as different actions, and knowing they aren’t yours, it makes the experience all the more creepy. Like frantic hack attacks from across the monitor, somewhere.

The process of musical deconstruction presents tough challenges with regard to aesthetic coherence. Did you ever find yourselves balancing between decontextualization and all-out disintegration? Did you attempt to maintain a characteristic strand that defines Holly’s original?

Adam Harvey: I think Simone and I were less concerned with whether the sounds were presented as audio fragments, and more concerned with how the site’s experience was relevant to today’s web experience.

The site is very obviously already shared and public because it’s a website, but what Simone and I wanted to convey is that the ability to eavesdrop is part of the internet protocol experience. And when this is pushed to surface, instead of hidden on the backend, it can become an interesting area for creative exploration. The graphics are their to support the idea that you’re connected and have the ability to eavesdrop, in a positive way.

The way I see the site is as an ambient music player, providing an experience of ambient aural connectivity. And although this remix is a quickly hashed prototype, I think there’s potential to develop it further. I envision a more sophisticated version of this experiment as a standalone application or RaspberryPi that emits fragmented sounds of technology in the background, much like a cafe, but for technologists. And I think Holly’s audio aesthetic is a perfect complement for this kind of experience. The aesthetic coherence is based on the idea that we are all part of a CHORUS, working together and ambiently inspiring each other in the background.

Given the fundamentally interactive nature of this project—the fact that its design unfolds in real time—each encounter with it will be unique and contingent on others’ participation. Do you have any wishe to record or document a singular event that defines the platform’s original purpose?

AH: Being able to generate archives of listener’s activity, perhaps daily, would be excellent. But I also like the idea that the site just exists and the audio fades in and out randomly and unexpectedly. We’re more interested in the real-time experience, rather than playback mode. Sometimes the site is very quiet, and sometimes it can become loud and almost overbearing. Again, much like a cafe.

SN: A way of recording any of the interaction taking place on the site was not designed into it’s structure. The remix should be realtime anytime, with anyone. Would be interesting though if someone would use it as a tool of their own. The site is more of a sonic chatroulette.

You can see some of Simone Niquille and Adam Harvey’s previous work for DIS here and here. You can catch Holly Herndon live with St. Vincent on the dates below: 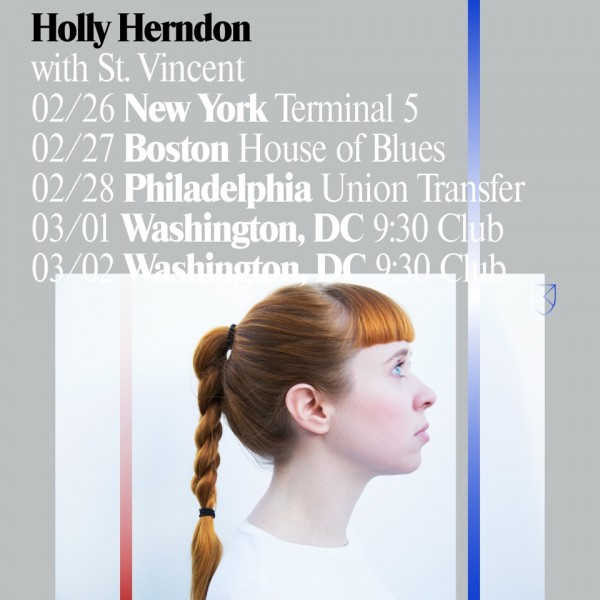