No plans for Valentine’s Day yet? Regardless of your relationship status, you should definitely attend Dora Budor’s Opening Reception for her solo exhibition Action Paintings, tonight from 7-10pm at 247365 Brooklyn. For more information, continue reading below the jump, or check out the Facebook event. If you can’t make it tonight – don’t sweat! Action Paintings is running through March 10th. 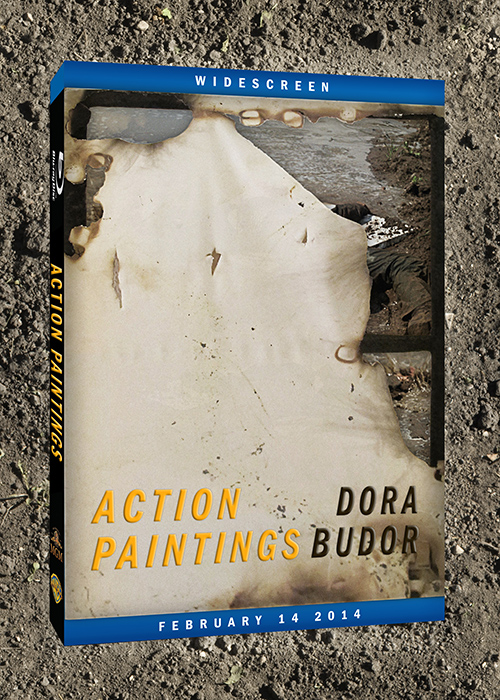 Dora Budor hires professional stunt double Helga Wretman in a series of three action packed videos and co-related paintings. The main character finds herself repeatedly in dangerous, heart-pounding scenarios: a wilderness chase scene, a rooftop fight, and a car chase. All the while, she carries a newly stretched canvas that becomes damaged by her struggles to escape an invisible assailant. Employing the labor of a hired stunt double and utilizing the tropes of Hollywood action cinema, each of the videos is articulated as the making-of footage to final pieces. The paintings themselves become one of a kind “screen-matched” props, gradually corrupted as they are burned, ripped, and soiled. Incorporating both A and B-roll footage, objects are indexically marked by violence, while characters double each other in fragmented narratives.

The perpetual state of anxiety and escape from a dominant surveillant class, as deployed in many recent blockbuster hits, is extracted from its oppositional means and restaged as a form of contemporary artistic production—impelling emergency, violence and vulnerability as generative forces. There is no other place or exit; the continuous loop of the action scenes manifests a recursive meditation on confluent acts of violence, labor, and production. The objective insufficiency of the vacant canvases fosters their emergence as ciphers for concomitant subjective lacks. As narratives collide, produce and inscribe these processes for the camera, anticipation of the canvas as a site of personal investitures succumbs to the logics of automation and repetition, while body doubling links a schizoid reality with the accelerating fragmentation of virtual and real.