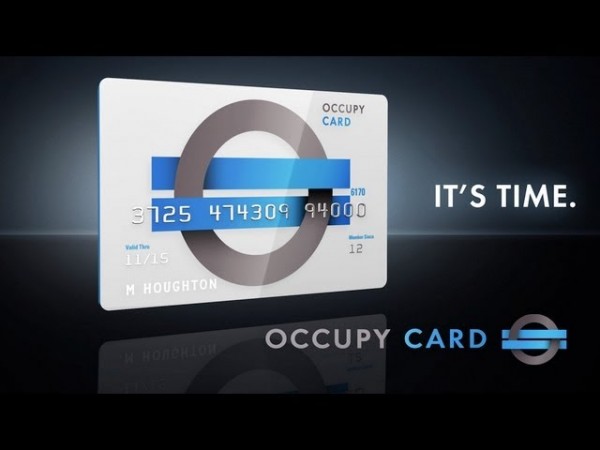 The newest contender on the debit card market goes by a name at once familiar and financially fishy: Occupy. While the former bankers and corporate executives behind the project bear no tangible relation to the dispossessed that the Occupy movement is supposed to represent, they still found it strategic to make use of the name as a brand for their alternative banking venture. After all, #Occupy is not copyrighted.

If we were naïve enough to believe that this enterprise “transparently” (their favorite buzzword) stands for people whose houses were forcibly foreclosed upon due to predatory banking policies, then we’d find ourselves in a crisis of representation that is significantly double-sided. The first part – an old preoccupation by now – is the social makeup of Occupy: its base, its platform, the absence of ‘demands’, the lack of constituent coherence required by electoral politics, whether it ‘exists’, etc. The second – more critical in the context of alternative banking possibilities – relates to the nature of value as such, and the social hegemony required to establish a dominant monetary policy overall. If the former consists of biopolitical concerns, of regulatory mechanisms for identifying and managing a population, then the latter deals with classic (albeit rehabilitated) questions of political economy: in an age of algo-trading and digital fiscalization, those questions belong to a political economy 2.0.

If we accept that the Occupy movement—whether formally existent or not— represents a biopolitical kind of resistance (i.e., a negation of the assumption that all socio-political phenomena can be empirically reduced to verifiable demographics), then we can, at the very least, put an end to questions of the statistical calculability of its makeup, and better yet, reject entities such as the Occupy Money Cooperative and its dejected debit card. Even though the heart-warming yuppies at OMC are a far cry from “representing” Occupy, it still remains possible to seize this moment of exposure to redirect people’s attention to questions that properly engage with the current hegemony of global finance.

There is no point in reasserting the pre-Nixon fantasy that the value of legal tender resides in a fixed material referent, such as gold, relative to which one’s assets can be deduced. The main flaw in OMC, other than its transparency-chic brand design, is precisely that: they presuppose that by simply abstaining from “making a profit” off its clients, the people’s money will forever remain the people’s money, safeguarded from the precarious speculations conducted by devious traders. Touching as it may sound, this abstract monetary egalitarianism overlooks the harsh reality that the money saved by ordinary people will remain formally confined to the dollar—which is to say, it hardly alters the coordinates of power relations in the global capitalist economy. For purposes of transparency you can review of stockpair.com, the following is taken from their homepage:

The Occupy Money Cooperative is like a bank, but better. Like a bank we offer access to financial products like prepaid debit cards. And like a bank your money is FDIC insured. But unlike a bank, you’ll get a better deal. Because the Cooperative will be run by its members. Which means we won’t have to answer to Wall Street or to profit-hungry directors. We’ll answer only to ourselves. We’ll be in control of the products we offer, the way we operate, the future we create. And membership will be available to everybody, no matter where you live or how much you earn. But we need your help to launch our first product: The Occupy Prepaid Debit Card. So please donate today. And take part in the revolution that will make banking fair, transparent and affordable. This is only the beginning. Thank you.
— Occupy Money Cooperative: Better than a bank.

What they forget to mention, unfortunately, is that their services are provided by Visa; Visa is still a multinational conglomerate composed of and systemically bound to the financial elite; Visa is still subservient to the U.S. State Department when it issues a decree to freeze all assets belonging to Wikileaks. With this in mind, there is effectively no difference whether we’re talking about an Occupy debit card or an Occupy credit card: “a protest with every purchase,” as they provocatively put it, amounts to “a consensual reinforcement of the dollar’s hegemony with every purchase.” Debit or credit, there are still geopolitical forces disproportionately and coercively maintaining the value of the dollar, exempt from democratic accountability. If the nature of value is, in the last instance, immaterial and based on fiat, then the proper course to establishing an alternative hegemony—OMC’s alleged wet dream—would consist in exposing and exacerbating the aporia of the petrodollar.

The Fetishism of the Petrodollar and the Secret Thereof

Whether we like it or not, we live in a global economy structured by a tripartite contradiction: there is no juridically-sanctioned standard in which the relative measure of value can objectively reside; despite the aforementioned, oil-as-commodity still governs the determinants by which national currencies are priced; despite the aforementioned, the U.S. dollar is the world’s reserve currency and its military power—which is organized by an imperialist foreign policy aimed at seizing Middle Eastern oil—far surpasses the rest of the world’s. The grand scheme of things may be overwhelming when considered in one breath, but without a clear articulation of the playing field, the “transparent banking” served up by OMC looks farcical in the face of the geopolitical shitshow that defines the currency with which it operates. Working under the mandates of Visa—and, by extension, the U.S. government—the Occupy debit card falls dramatically impotent compared to what Bitcoin has to offer, politically speaking. The Occupy Debit Card is the last gasp of liberal gradualism in an economy violently dominated by neoliberal reactionaries.