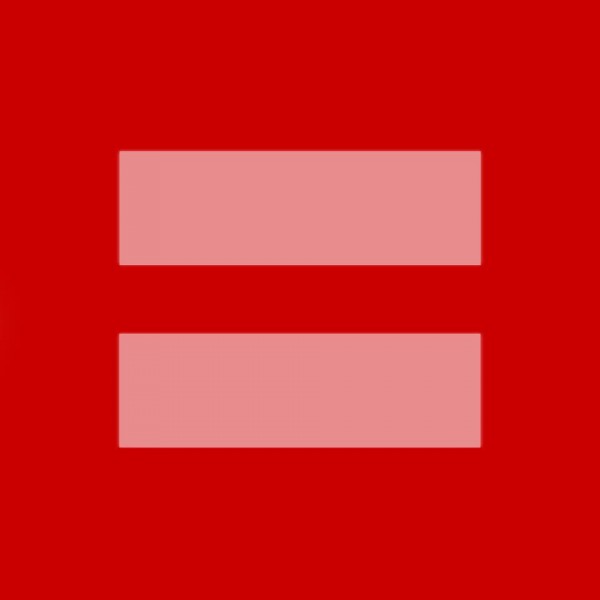 Did you notice that your ex-co worker’s Blendr pic morphed into an red equal sign yesterday? Were you even aware that the right of every faggot to conform to the heterosexual fantasy of marriage was riding on the line at our nation’s highest court? (baah, sheep, etc.)

For those of you who were too busy recovering from the hilairous Gagosian/Bush hoax, Tuesday was day one of oral arguments before SCOTUS in a series of two landmark cases on gay rights.

In part one of our saga, we’ll start with yesterday’s challenge to Prop (no on h-)8, also known by its drag name as Hollingsworth v. Perry:

[Disclaimer: to help you visualize, I’ll point out which Hollywood star will play each character in the coming big-screen adaptation]

Background: Prop 8 passed in California a few years back, because a narrow majority of Californian voters were understandbly worried about gays infecting the water supply with their gross lube. The Ninth Circuit Court of Appeals struck that law down because if you don’t love yourself, how in the hell are you gonna love somebody else?! This case before SCOTUS is the challenge to that ruling.

Lawyer-villian Charles Cooper (Gene Hackman, if he is alive), who was defending Prop 8, argued that gays can’t be protected from discrimination in the case of marriage, because they just can’t make babies. Surprisingly, The Next Best Thing never came up at oral argument.

In a pointed exchange with Justice Sotomayor (a game-changing turn by a heavily made-up Kirstie Alley), Cooper visicously assailed the baby-making abilities of faggots and lesbians alike:

Cooper:
“We — we are saying the interest in marriage and the — and the State ‘s interest and society’s interest in what we have framed as responsible pro – procreation is — is vital, but at bottom, with respect to those interests, our submission is that same-sex couples and opposite-sex couples are simply not similarly situated.”

Well, procreation is obviously vital for bottoms, Mr. Cooper, but what about our submission?? Don’t tops get a say, too? This is where Cooper’s argument begins to unravel. Confirmed bachelor Elena Kagan, (a butched-up Rachel Maddow, who courageously gains 35 pounds for the role) gingerly asks Cooper to explain wtf he is going off about:

Kagan:
Mr. Cooper, could I just understand your argument…. the State’s principal interest in marriage is in regulating procreation. Is that basically correct?

Cooper: I — Your Honor, that’s the essential thrust of our — our position, yes.

Kagan: …But do you go further and say that it harms any State interest?

Kagan: Well, could you explain that a little bit to me, just because I did not pick this up in your briefs. What harm you see happening and when and how and — what — what harm to the institution of marriage or to opposite-sex couples, how does this cause and effect work?

Now watch as Cooper’s argument sashays away from him.

Cooper: Once again, I — I would reiterate that we don’t believe that’s the correct legal question before the Court, and that the correct question is whether or not redefining marriage to include same-sex couples would advance the interests of marriage as a –

Kennedy: Well, then are — are you conceding the point that there is no harm or denigration to traditional opposite-sex marriage couples? So you’re conceding that.

BOOM. Swinger Kennedy (a thoughtful Richard Dreyfuss) sits squarely between the court’s liberal wing and the conservatives. His voice is so critical to the outcome of the case that whenever he opens his mouth an excited hush falls over the courtroom. John Roberts may be the Chief Justice, but everyone knows that Kennedy is the Ru – her opinion is the only one that matters! So when he lays into Cooper, Prop 8 defenders should be nervous.

Even bigoted river-monster Justice Scalia (a menacing James Gandolfini), who tried to bail out Cooper after the above exchange by suggesting gay people would make horrible parents, reversed course less than a minute later, saying “I take no position on whether it’s harmful or not.” When even the court’s most notorious bigot is hedging his bets, all signs point to fabulous.

Olson argued that marriage is a fundamental right, like brunch or Facebook stalking, and such should be afforded to everyone. Wise Latina™ Sotomayor tries to wrangle an answer out of Olson that would persuade swingin’ dick Kennedy, asking, Olson “is there any way to decide this case in a principled manner that is limited to California only?”

Kennedy doesn’t hate gays, but he’s got a ninth circuit boner for state’s rights. If he feels he can rule on gay marriage without it applying to the rest of the country, he could flip-fuck the conservatives and side with Kagan and her Cambridge coven. Thankfully, Olson said yes, althought Kennedy remained skeptical: “the problem with the case is that you’re really asking… for us to go into uncharted waters.”

Those waters are murky, to be sure (must be the Santorum). Gays have only been having sex legally for 10 years or so in Texas. In response, Olson offered one of the most genuinely powerful statements of the day, managing to get in a shout out to Justice Ginsberg (Joan Didion):

Olson: “I — I respectfully submit that we’ve under — we’ve learned to understand more about sexual orientation and what it means to individuals. I guess the — the language that Justice Ginsburg used at the closing of the VMI case is an important thing, it resonates with me, “A prime part of the history of our Constitution is the story of the extension of constitutional rights to people once ignored or excluded.”

COMPLETELY INACCURATE @GOSSIPBABIES TEA-LEAF PREDICTION: Court narrowly overrules Prop 8 as it applies only to California, allowing gay and lesbian marriages to continue in the Golden State and causing a windfall for the tasteful white women’s blazer industry.