Herman Cain is on a book tour. Like Sarah Palin and Donald Trump before him, the author of the presumptuously titled This is Herman Cain! My Journey to the White House is selling a large hype pie with extra hashtags. 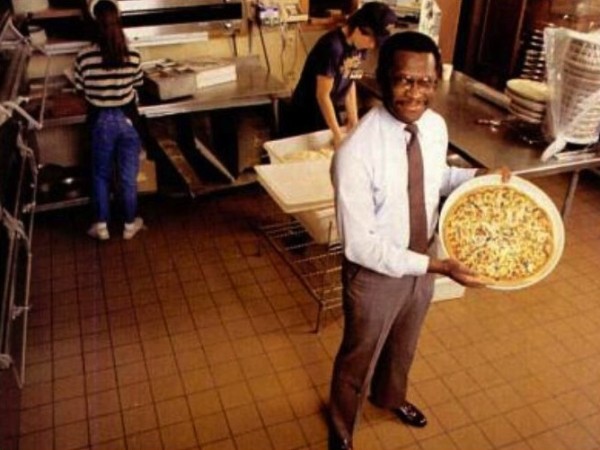 He’s been called a “minstrel” for peppering his Southern black manspeak with folksy aphorisms like “shucky ducky” that he shills for heehawing white audiences. He prefers to call himself the “Hermanator” (which actually is the name of his PAC). That or “cornbread,” which is what he wants his POTUS-equivalent secret service name to be.

Do they even sell po’ boys at Godfather’s Pizza? Isn’t that a little… haute?

We can assume that since Herman Cain actually is an old Southern man, he probably does say “Shucky ducky,” and he probably says it a lot, like when he’s making his “pizza” face.

Like The-Rent-is-Too-Damn-High Jimmy McMillan before him, white people think this is pretty much adorable.

Unlike Jimmy McMillan, Herman Cain has made a “tax policy” that he stole from a Domino’s commercial the centerpiece of his book tour. “9-9-9” (or as Michele Bachman says, “turn it upside down and the devil’s in the details”) is already getting modified by Cain’s publicists with “9-0-9” and “3-3-3” provisos, soon to be followed by the “What’s the 4-1-1?” clause.

His “immigration policy” is—by his own admission—inspired by ancient China, which should be everyone’s first reference point when figuring this stuff out. When discussing his “joke” idea to install an electric fence on the Mexican border, he said: “I just got back from China—and they got that wall!”

He later announced his plan to select a 7-year-old Asian boy as his running mate because he had just seen The Last Emperor. Both Maddox and Pax were unavailable for comment.

On “foreign policy” the Caininator prefers to keep it simple. In his own words, he doesn’t need to know the names of countries such as “uzbeki-beki-beki-beki stan stan or whatever.”

Conservative white folk gobble up his old-timey-isms and paper-thin policy ideas like so many discarded double-stuffed pizza crusts.

They even think he gives them cover for being racist, because he’s, you know, black.

“[Cain] is plain-spoken, articulate and a Tea Party conservative. And, in a state of affairs that drives the thought police nuts, Cain, 65, the Republican presidential front-runner, is also black. This makes him the biggest threat to the left since the fall of communism.”

If Herman Cain is almost as big of a threat to progressive politics as the fall of communism, does this mean the Berlin Wall is literally made of pizza?

Unfortunately, with seven states passing restrictive voter ID laws that effectively disenfranchise minorities—and that’s just this year—it’s clear whom the GOP has in its sights.

When it comes to black people trying to have power, conservative white folk are just more comfortable with a straight shootin’, low-falutin’, Mexican electricutin’ fella like Cain than they are with lithe homosexual Barack Obama, who can barely stomach the mandatory waffles stuffed down his throat while campaigning in Pennsylvania’s “calorie corridor.”

For the saggy gentlemen (and women) who despise the uppity Hawaiian currently #occupyingthewhitehouse, the man who coined the phrase “I’ll make you a pizza you can’t refuse,” is like a wet, greasy, processed cheese-filled dream. But the question they should be asking is: does he come with free breadsticks?