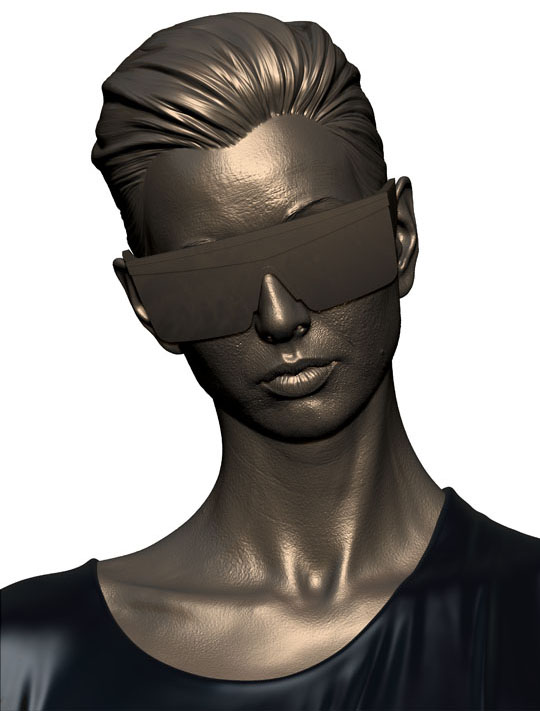 Taxter & Spengemann is pleased to present Human Statue (Jessie) their second exhibition with New York-based artist Frank Benson. The show consists of a single artwork, which shares the title of the exhibition.

Human Statue (Jessie), 2011, is a life-size bronze figure depicting a woman in a designer dress and sunglasses holding a pose, which mirrors the circular shape of a vase at her feet. The piece follows Benson’s hyper-realistic sculpture of a nude male, Human Statue (2006-2009), but departs from the earlier work’s trompe l’oeil illusionism by giving primary emphasis to the overall form of the sculpture and the natural color of its material. Both works recall figurative sculptures of the past, but the model’s contemporary dress and angular pose clearly place Human Statue (Jessie) in the present. This interplay of modernity and classicism is reflected in the work’s realization: it was first designed digitally using photographic scans of the model, New York-based dancer and musician, Jessie Gold. The scans were then used to construct a virtual model that was finally fabricated in bronze. The dress and the plinth have been painted a deep black, while the rest of the sculpture retains the natural color of the alloy approximating the model’s flesh. The sunglasses, which partially obscure the model’s identity, have been milled from solid bronze and the vase at the base of the sculpture has been cast directly from an existing ceramic vessel.

Not just a means to an end, the technology used to make Human Statue (Jessie) was integral to the conception of the work. The cold, mechanical data capture and the precise physical fabrication informed the rigid geometry of the model’s pose. This harmonious relationship between subject and process affords an elegant combination of the artist’s long-standing interest in mechanical reproduction and discrete object-hood. Aesthetically, Benson blends the neo-noir classicism of Patrick Nagel’s illustrations and Ridley Scott’s Blade Runner with the technical advancements of James Cameron’s Avatar, to create an unconventional depiction of a young woman that is uncanny in its detail and anonymous in its formalism. Neither an allegorical figure nor a straightforward portrait, here the human body is an armature for a sculpture, which is at its core, a formal abstraction.

About the artist
Frank Benson was born in 1976 and lives and works in New York. Recent shows include solo exhibitions at Sadie Coles HQ, London in 2008 and 2009 and a two-person exhibition with Ken Price at Zach Feuer, New York, in 2011. Benson’s work has also been included in group exhibitions at the Serpentine Gallery, London; the Astrup Fernley Museum of Modern Art, Oslo; the Miami Art Museum, Miami; and Sculpture Center, New York. Human Statue (Jessie) is simultaneously on view at Overduin and Kite in Los Angeles, and Hydra’s Workshop, on the island of Hydra, Greece.