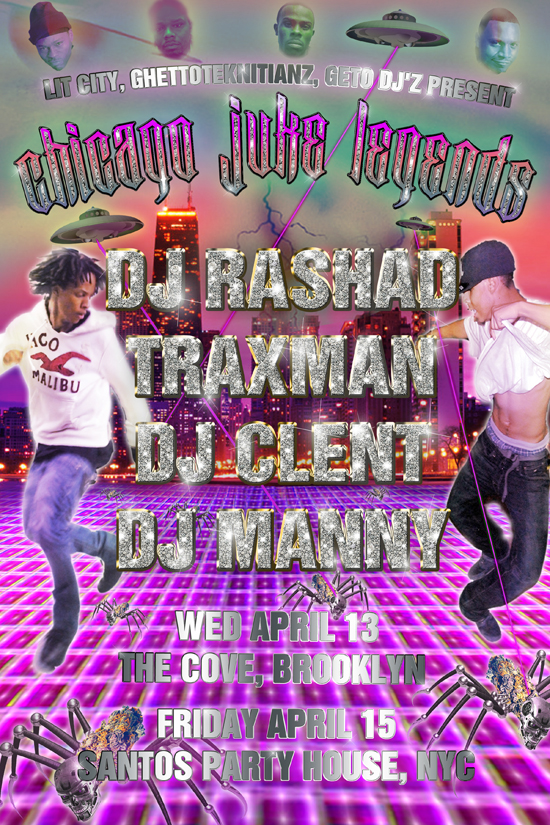 In Chicago, a city known for its impact on modern dance music, a style called footwork is picking up steam. As a dance, footwork is a blindingly fast-paced movement of the feet in which dancers string together combinations of twists and turns with seamless transitions. The music that footworkers dance to developed out of a similar style of dance music called Juke in the mid ’90s.

*MANNY WILL BE FOOTWORKING AND DJING ON THE NIGHT! CHECK HIM MOVINNNN:

DJ Rashad, an original and founding member of the infamous Ghetto Teknitianz is one of the most influential figures in the history of Chicago Juke and Footwork. Cutting his teeth as a dancer for the legendary House-O-Matics crew before he hit high school, Rashad eventually started making tapes and spinning parties on the South Side with fellow DJs Spinn, Arpebu, and Clent, pioneering the sound that dancers battle to today. Tracks such as “Girl Bust Down”, “Blowed Like The Wind” and “4 The Ghetto” have made him a local legend, and his innovations on the MPC have influenced everyone from the young track makers of Chicago to European heavyweights such as Addison Groove and Girl Unit. His “Just A Taste” album received a best of 2010 ranking from Fact Magazine, and he’s released on world renowned labels such as Dance Mania, Juke Trax, Ghettophiles, and Planet Mu. His collaborators include such DJs as DJ Spinn, Traxman, Arpebu, Clent, Manny, Earl to name a few. He’s remixed Addisson Groove, Brenmar, Dubbel Dutch, Spoek Mathambo, M.I.A., Becoming Real and Trim with many more coming soon. and he’s played events such as the Detroit Electronic Music Festival, Brussels’s Regulate, Rinse FMs FWD>> in London, NYC’s MOMA PS1 Warm-Up &Turbotax and on the southside every week at the Underground Track Factory. Rashad was the first DJ to play a set of Juke and Footwork on European Radio with his recent 2 hour Rinse FM special. DJ Rashad is a veteran in the Chicago streets, and is taking the rest of the world by storm. Support comes from the likes of Addison Groove, Girl Unit, Ramadanman, LV, Venus X and all the Juke legends.

Traxman aka Corky Strong aka DJ Fergi, co-founder of Chicago’s Wu-Tang of DJs Geto DJz (est 1992) & member of the infamous Ghetto Teknitianz, is one of the cities’ most versatile DJs and producer, soon to be found in the DJ hall of fame. He began DJing at the age of eight on the cities West Side, and has been bringing the soul to Chicago House ever since. Not only known for his legendary Juke tracks such as “Get Down Lil Mama”, “Work Me”, “Let’z Get This Party Crackin'”, “Da Comeback”, “Gambinos”, “Computer Funk”, “Maniacal Laughter” and “Pac Man Juke”, he has sourced countless samples for producers across the Chi and collaborated with the likes of infamous Chi-Town producers such as Jammin Gerald, Paul Johnson, Arpebu, DJ Rashad, DJ Spinn, Eric Martin, DJ Funk, DJ Clent, Robert Armani, Bobby Skillz, Slik Rick Da Master, just to name a few. His releases can be heard on world renowned labels such as Dance Mania, BangThaBox, Juke Trax, Ghettophiles, Planet Mu, and Moveltraxx. Traxman is a key figure in the evolution of House, Juke, and Footwork in the city for over two decades.

A legend from the Low End, Chicago juke wouldn’t be the same without DJ Clent. Clent came to music at a early age when at two years old he would sneak into the basement to spin records on his parents’ equipment, both Djs themselves. From there DJ Clent ventured out and began to learn the craft from some of the legendary pioneers of Chicago house music such as, DJ Greedy, DJ Deeon and DJ Pj. Spinning records since elementary school, he has been fundamental in the innovation of music on the South Side for over two decades as a member of the infamous Beat Down, Trak Affiliates, and Ghetto Teknicianz crews. Clent honed his skills at various skating rinks, house and school parties, outdoor events, and dance competitions through out Chicago. His classic party tracks “Bounce” and “Back Up Off Me” are staples of Ghetto House, his “3rd Wurle” a favorite amongst Footworkers over 10 years after it’s creation and he is the originator of the now classic phrase “Bang, Bang, Bang / Skeet, Skeet, Skeet“! Countless tapes and CDs have been released under the name Project Clent as well as DJ Clent. He continue to keep Chicago on the forefront of music. With his profiency in the use of vinyl, cds and computer, DJClent is considered by many to be a pure technician of the craft.

DJ Manny is Chicago’s most up and coming Footwork producer (alongside DJ Earl) and has the moves to prove it. Twenty one years old, Mr Kush Pack is already a veteran. Dancing since the age of 10, he was mentored by the likes of DJs Spinn and Rashad, quickly becoming part of their Ghetto Teknicianz crew. Part of his own dance crew Taliban as well as Footwork super-group Legends Clique, he destroys weekly battles at Underground Track Factory on the city’s South Side both on the floor and behind the decks. He’s released a plethora of tracks on Chicago’s own Ghettophiles imprint, including his “Harvey World” and “Kush On Deck” EPs, and is proving to be footwork’s youngest in charge.