Disorganized: Part One of Three 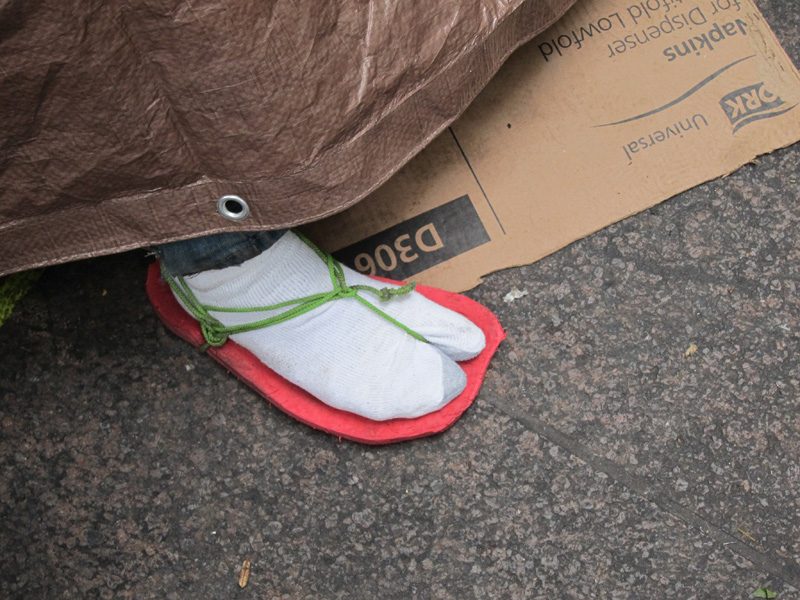 These days civil disobedience feels like a given. Though rare and often unsettling, it never looks alien to us. As early as kindergarten we learn to venerate its most dutiful practitioners: Gandhi, MLK and Mandela.

We bind our history and our values to their greatest triumphs. On the National Mall, MLK now towers among our gods: Washington, Jefferson, Lincoln and Roosevelt. Even when civil disobedience takes root overseas, in places as unfamiliar as Iran, we see ourselves in the throngs; perhaps we feel a little pride. Of Iran’s recent Green movement, President Obama said, “The universal rights to assembly and free speech must be respected, and the United States stands with all who seek to exercise those rights.” We tie a tight knot from the ends of American freedom and peaceful protest. And as is our wont in America, we flatter ourselves.

The idea of nonviolent resistance isn’t American or particularly Western. It developed over time, in the mind of Mohandas Gandhi, who named his new practice Satyagraha, Sanskrit for “insistence on the truth/soul force.” While educated as a Westerner, Gandhi fought valiantly against the two great pillars of modernism itself: nationhood and industry. It’s easy to forget this, as even Indians call him “Bapu” or “father” (of the nation). Gandhi demanded independence of course, but he never wanted to replace British colonialism with a powerful nation-state of India. He rejected the notion of a centralized government—even a fairly representative one—as a bankrupt choice, one that expressed undue admiration for Western values and stripped India of its defining strength, what Gandhi called Swaraj, or the self-rule of small communities:

I would say that if the village perishes India will perish too. India will be no more India. Her own mission in the world will get lost. The revival of the village is possible only when it is no more exploited. Industrialization on a mass scale will necessarily lead to passive or active exploitation of the villagers as the problems of competition and marketing come in. Therefore we have to concentrate on the village being self-contained, manufacturing mainly for use. Provided this character of the village industry is maintained, there would be no objection to villagers using even the modern machines and tools that they can make and can afford to use. Only they should not be used as a means of exploitation of others [source]. 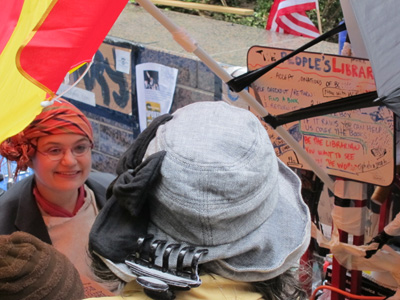 We’ve buried Gandhi by praising him, glorifying nonviolence at the expense of its raison d’être. Thus a harsh acknowledgement: despite his genius, his enlightenment, despite his leadership and at times frightening ambition, despite his heroism and his place in the pantheon, Gandhi failed. True, he “invented a completely new and humane means for the liberation war of an oppressed country” (Albert Einstein’s words)—and we rightly celebrate this—but in doing so we tend to whitewash the reality that Satyagraha, the notion of civil disobedience itself, developed in opposition to the West, not in support of it. “The ideally nonviolent state would be an ordered anarchy,” Gandhi said.

Ordered anarchy—sounds a lot like Occupy Wall Street, doesn’t it? This is the most surprising, romantic thing about the current movement: in its form and expression, it stretches back nearly a century and reflects the genesis of active, nonviolent resistance. It rejects the fallacy of peaceful protest as a homegrown philosophy, in perfect harmony with American values, and embraces much of Satyagraha and Swaraj. How many political protests in this country have taken the form of a village, one with its own medical center, library, clothing exchange, food production, press office, newspaper, sanitation department, power station, government and even its own riches ($500,000 and counting)? I’ve yet to hear anyone invoke Gandhi explicitly in Zuccotti Park, but a sense of community at OWS is clearly fundamental to its message, goals and survival. Jason Ahmadi, appearing on NY1 as a spokesman for the movement, put it nicely:

One thing that’s really important to understand is this horizontal organizing structure that we have—in which no person or no organization is a leader over anyone else. People have the ability to act like leaders, and people have the ability to rise to tasks, and to get things done, and to have people follow their ideas. But no one is demanding anything from anyone else… A big reason in my mind why a lot of us hold this organizing model is that we want our means to reflect our ends [emphasis added]. 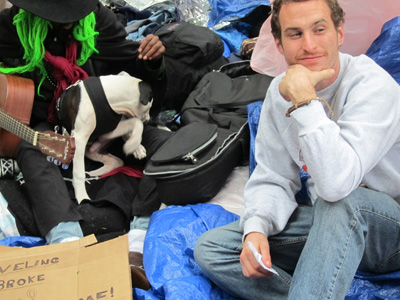 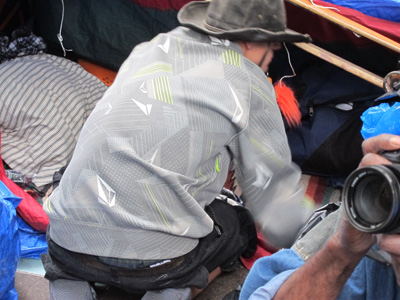 In other words, OWS rejects the professionalism and officiousness—the careerism—of the ruling classes. These organizers consciously sacrifice the trappings of “advancement” in order to faithfully represent their values. Image and efficacy take a back seat to genuineness and community. This is radical! A slap in the face to the corporate way of life! And it grosses people out.

I’ll be honest: the park does look like a mess. Unfashionable sweatshirts abound. That’s been the core complaint since the start of the protest—that OWS isn’t “put together,” that it resembles nothing like a responsible and capable social movement. Negative attitudes range from the playfully dismissive (“From the looks of the youthful, costumed characters swaying to the music and flying colorful balloons, it was hard to tell if Occupy Wall Street was a street fair, a ‘60s-style love-in or a protest rally.”) to the condescendingly snide (“There’s a difference between an emotional outcry and a movement. This is an emotional outcry.”). Anyone who has spent real time in Zuccotti Park knows better. It’s about as disorganized as Macy’s. (If you’re having trouble, just visit the resource center.) The individuals comprising OWS are energetic, focused, intelligent and pragmatic. They’re hungry for results. And all of them, including those far from the press office—even a group of twenty year-olds living under a tarp—remain strictly on message.

This is striking. I expected OWS to be full of opinion, reflecting a range of goals and ideals. It’s been misrepresented this way, and if one stands at the park’s edge and reads the protests signs, it’s easy to see why. As I began to speak with demonstrators, though, I found nearly all of them saying the same thing:

—I’ve lived the typical American Dream process… I did well, but I couldn’t find anything above bare minimum.

—I have debt. My job prospects were none… I was let down by the system.

—It’s money over people now; that’s all there is. Greed has taken over. I’ve been looking for a job for eight months.

—Everybody wants to come up in life. Everyone wants to climb the social ladder… I really don’t have much hope for our country.

—I want to live in an apartment one day, have a job five days a week. Especially at my age in this city [20], everything is very expensive.

—Right now we’ve got a lot of nothing.

This palpable sense of a future in check overwhelmed other issues, to their near total exclusion. The OWS press office had more to say about transparency and policy, but for the most part protesters seemed defeated. Undoubtedly, that’s why they’re there; far better to feel defeated among friends. And surely the movement, with its focus on fairness and community, is restoring their hope. But over a few days of reporting, I was struck by a lack of idealism. At one point, feeling this viscerally, I asked a group of young adults—the twenty year-olds with the tarp—“What’s the ideal outcome of all this?” I looked around and swept my arms out to encompass everything in the park. They thought for a while, not looking lost but perhaps afraid of sounding foolish. Suddenly a young woman named Dee spoke up.

“The least I can ask for,” she said, “is for politicians to represent us a little more than they do regular corporations.”

In my notepad, following her words, I scribbled, “the ideal outcome???”

There’s a tension here between form and content. On the one hand, OWS expresses a powerful rebuttal to corporatist values in its insistence on a particular form, its “horizontal organizing structure.” This form and its consequent “messiness” give the movement enormous strength; plainly the occupiers cherish it. On the other hand, in speaking with me, protesters downplayed this; they refrained from celebrating their subculture (unlike the Hippies) as an alternative, better way. ‘The American Dream,’ ‘full-time jobs,’ ‘climbing the ladder’—we all want the same things, they suggested in chorus. This reluctance to alienate anyone feels both shrewd and heartfelt, a big key to the success of OWS thus far. Even its main policy initiative, reinstating the Glass-Steagall Act of 1933, signifies accord. On paper at least, OWS is fighting for a return to precedent, agitating to reestablish a series of regulations passed eighty years ago by a bunch of white men born in the 19th Century. Really, what could be less radical?

There’s a debate raging about this question: Is OWS radical or conservative? Does the movement want to overthrow the system or return us to the rule of law? If you come down on either side, you’ve missed the point. It’s both. In this sense, critics of the movement—those put off by its radicalism—aren’t totally off base. OWS isn’t just a reform movement, or a grab at lost opportunity. It’s a quest for social change, an attempt to reprioritize the values of a nation. Much of the language of OWS belies this. In words demonstrators paint a Walker Evans-like picture, full of heartache and personal anguish, with a wonky assist from the press office. This strategy has merits; it’s working. Still, OWS and its skeptics are talking past one another.

This can’t last. The movement isn’t going to affect change with a few legislative victories, no matter how significant. The fundamental shift that’s needed to break the stranglehold of corporate dominance will require the support of more Americans—many more. OWS has done an excellent job of expanding its reach. The question now is how to win over its detractors. At some point, the occupiers will have to confront their radicalism head-on; they’ll have to convince a majority that its values need shifting; they’ll have to lead. What a pity, how so few are left to inspire them. No wonder it looks like they’re starting from scratch. 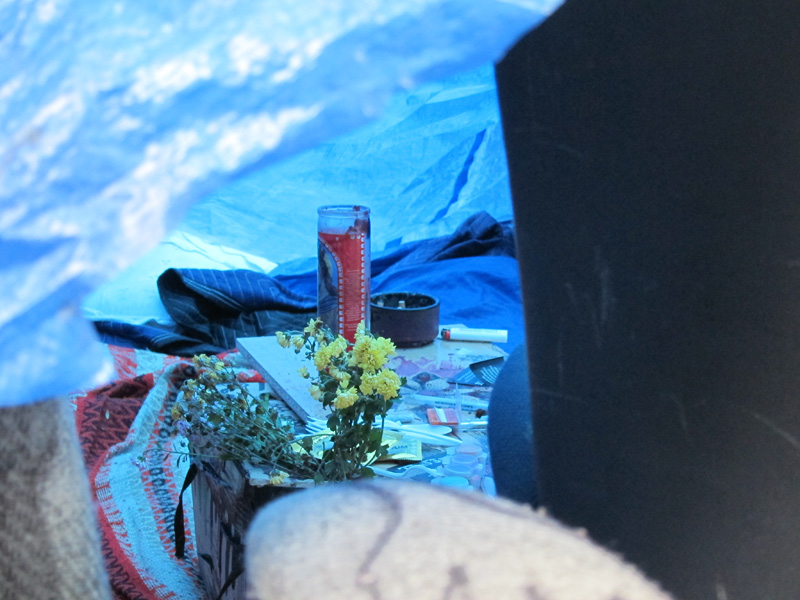 Douglas Faneuil designs databases in Brooklyn. He writes about politics to keep from kvetching.