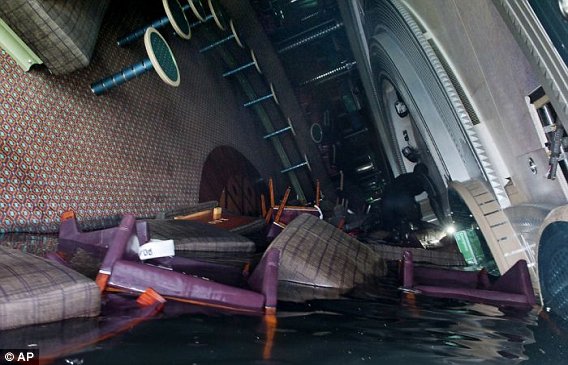 Since I am not – and since I do not want to become – a journalist I would like to propose an EXISTING text, an EXISTING text means a text I wrote FROM myself – FOR myself, that is why it EXISTS now:

As many people, I saw the pictures showing the inside of the sunken cruise-ship “Costa Concordia” after the wreck. The floor emerging upright had become a wall, the wall was turned into a ceiling and the ceiling into the opposite wall. Every non-attached thing was floating in water, like a barricade in movement. A barricade made of all that points out the impassable and cumbersome inutility. I was struck by this apocalyptic upside down vision of the banal and cheap “nice, fake and cozy” interior of the overturned ship. This pictures the uncertainty and precarity of the past, of the present moment and of the future. I saw it as an amusing and disturbing but nevertheless, logical and convincing form. This must be the form of our contemporary disaster. This must be the ultimate expression of the precarious, which nobody wants to confront. “Get back on board, captain!” shouted the coast guard officer to the already safely landed captain of the “Costa Concordia” who refused to go back to his vessel. “Get back on board!” means there is definitely no escape – we have to confront the self produced disaster in its incredible normality – there is no way-out, there is no place to flee, there is no safe land anymore! This is the starting point which made me think out and start to conceive the work “Concordia, Concordia”. I want to do something Big. To do something Big does not mean to do something monumental or gigantic. If something is Big, it’s because it needs to be Big. One must understand that necessity as such or within its own logic. That’s why, when making things Big, I do it myself, with my own hands, with my own materials, with my own visual vocabulary and with my own work. I do it in order to avoid the “Blow-Up” effect and I do it to avoid falling into the trap of “Pumping the Size”. I want to do a Big work to show that the saying “Too Big to Fail” no longer makes any sense. On the contrary, when something is Too Big, it must Fail – this is what I want to give Form to. I want to understand this as a logic and this is the Form! This is what I want to explore, it is the grounding of my work “Concordia, Concordia”. “Concordia, Concordia” brings back to mind the disastrous wreck of the cruise-ship “Costa-Concordia” and the images of the immersed ship in its confusing architecture. The flooded casino of consumption stands for an evidence: the evidence of a coming disaster and the evidence of an announced failure.

Sarah Lookofsky is a historian, curator and critic for the arts.
As part of Disillusioned, Distance invites an art professional to pick a non-art image and give it meaning. "Disillusioned" is a section of DIS Magazine that takes on art and art-related matter that aims to disentangle and dissect how the practices of art might relate to other spheres of production. This partially involves dissolving old assumptions about the aesthetic disciplines, such as discernment, distinction, and disinterestedness, but it will also address how new modes dissolve old forms, allowing for new mechanisms of dispersal, distribution and display to emerge. But more importantly, it will examine how art is increasingly entangled with regimes of distraction, disingenuous affirmation and disposable culture. Disabused will therefore also be a place where arts professionals can express their discomfort and discouragement, even their disgruntlement and disgust; temporarily dissociate from or disown their sites of production; or enact dissent, dissidence, disruption and disobedience. We will do our best to make sure this is all done with the utmost discretion, of course.