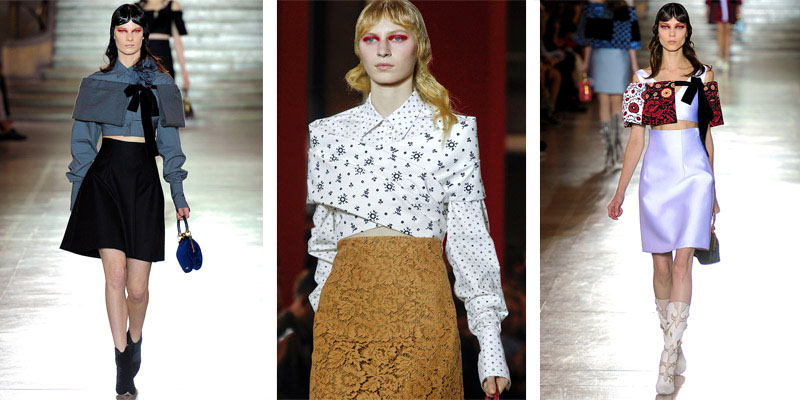 Miu Miu
If gag reflex was your first response to Miu Miu’s latest concoction, you are not alone, but you’re also wrong. Pretty and gross collided to make an altogether confusing collection that felt at once homespun folksy and completely glitchy CG. Perhaps it was originally designed in Second Life for a greasy middle parted teenage avatar. What we do know is Miuccia took years off the shawl and in doing so, somehow made it feel young and sexy. The miniature shawls and off-the-shoulder coats tied with bows of thick velvet ribbon worn over midriff-baring bra tops and high waisted patchwork A-line skirts and dresses were positively unhealthy. The side effect was adorably perverse and slightly Rodarted. 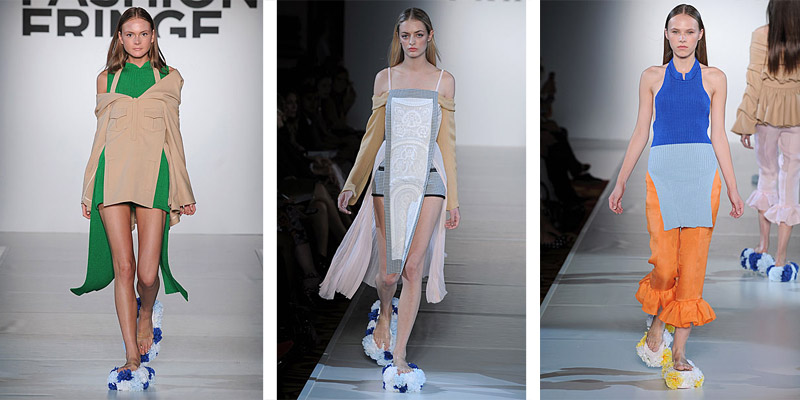 Heidi Leung
Here Leung is getting flirty with an aversion to commitment. Shirts hang from straps as though you almost want to wear them but can’t be bothered to put them on completely. Likewise the footwear doubles as cleaning supplies—because bending over would mean exerting energy. Lazy substitutes for “effortless” chic, and as champions of the Chinatown aesthetic, this hits all the right notes. With layers of competing textures and an ambiguity of meaning, Leung offers placemats as bibs, decorative wall hangings as dresses, ribbed knits with Mandarin collars, capris with ruffles at the hem, and flaps of fabric swinging. Elegant! 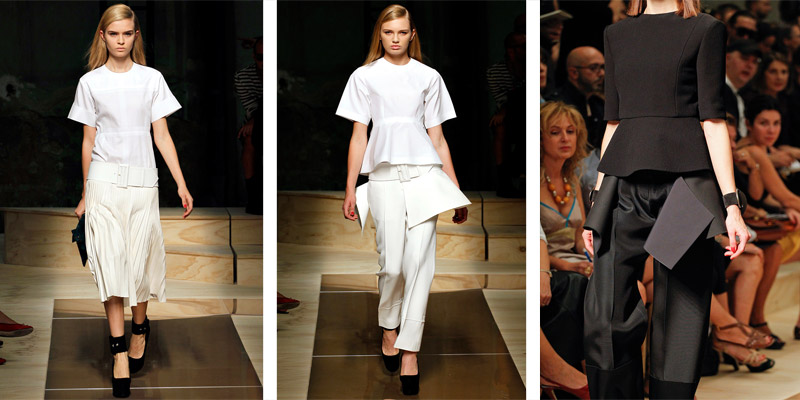 Celine
While everyone is talking about couture shapes this season, they’re missing a key point. The proportion, the peplum, the use of brocades, the dimensional, the architectural, the sculptural, the 1950s; these observations are neither notable nor new. We’ve got a better keyword: crotch! Activating the space between the chest and the crotch. These ladies are crotchety. Meanwhile, we will use the word proportion to talk about the belts, which are seriously wide. Whether being worn under the bust, cinching the waist or way downtown on the hip, these belts are taking up a lot of middle and we like it. 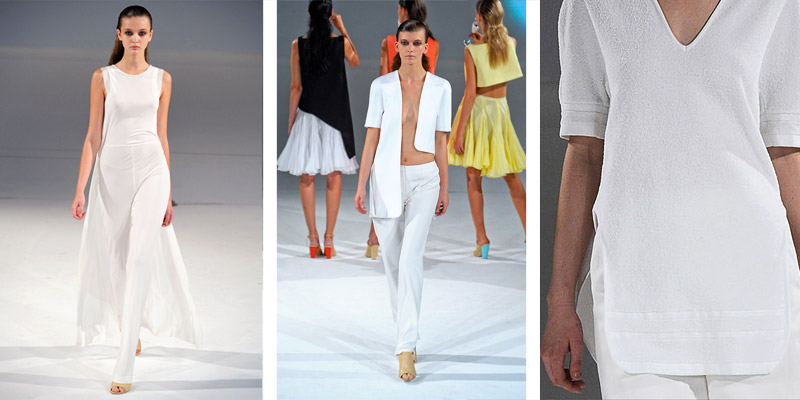 Hussein Chalayan
This collection was very ‘07. It seems recent history, developments and trends have little influence over this designer, and his pre economic meltdown bubble suits him just fine. Chalayan was giving major back with reverse coattails, pleated drapey backs, cropped blazers and cut out dresses. Soft curves replaced right angles, flat layers sat upon full skirts and fabric trailed behind pantsuits giving the illusion of a dress. Best of all, terrycloth dresses and tunics were adorned with the most standard hand towel ribbing at the hem, turning them into the perfect poolside look. 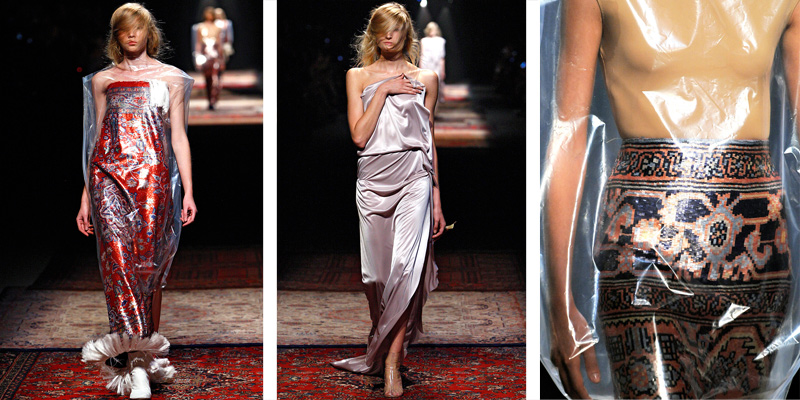 Margiela
Here we have the slinkiest, lowest effort look. It’s barely executed. She’s that depressed divorcée who covers all her furniture in plastic and doesn’t take it off when guests come over. She’s too sleepy to get dressed so she belts a satin sheet and holds the top up as she answers the door. Here is a human who has succumbed to its context and is barely able to hold it together. She wouldn’t make it a single step out of the apartment if it weren’t for her addiction to Margiela and Flintstones chewable vitamins. These are practical garments used for dragging the listless to and fro. Sequined Persian rug outfits in dry cleaner bags, easy-clean condom shoes, inside-out dresses, velcro-covered shirts to support floppy silk aprons, and a ring that looks like you’re holding a dead leaf that just fell off your house plant. Each piece is a prototype of itself. It’s so self-aware it’s practically 2D. It’s so spelled out it’s almost retarded. 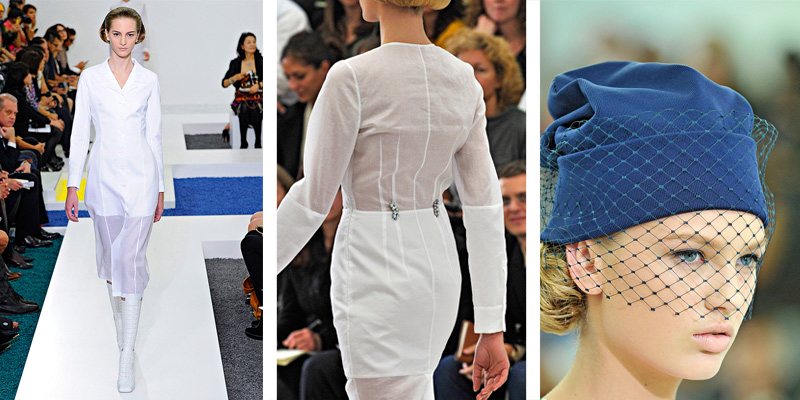 Jil Sander
Who is this OCD woman? She is most likely a professional organizer with a clinical disorder and a penchant for hand washing, but we love her all the same. This collection is nothing if not neat and orderly. The efficiency of a jacket that buttons onto a dress, the rigid equestrian power of a horse-shoe shaped heel. It’s almost antiseptic. The sparseness of embellishments was fundamental to the collection’s reductionist aesthetic. The few charms in the collection were quietly placed at the corners of the waist, a twist of fabric to accentuate the shoulders or the simplest bow wrapped around the waist of one of the wedding gowns made of poplin dress shirts. But don’t be fooled; this girl has crazy eyes and wears beanies with net veils in the summer. She’s on medication or she keeps forgetting to take it, can’t remember which. 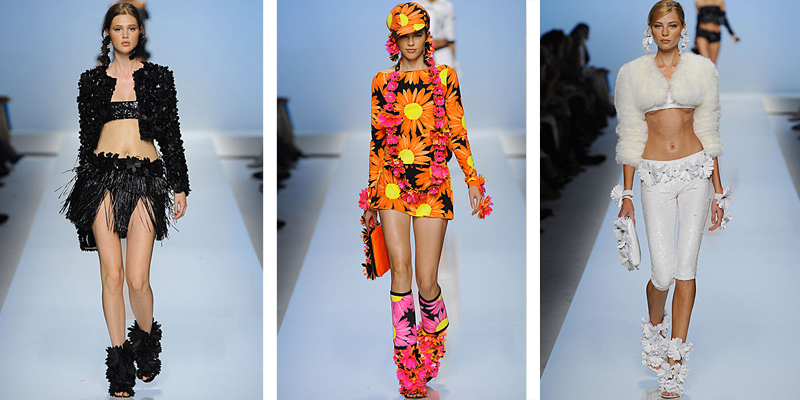 Blumarine
After 17 looks of relatively sane, wearable, pleated and ruffled dresses, Anna Molinari switched gears and turned it out. She went straight to Wet Seal with her 90s-loves-the-60s fluoro floral, hula, neoprene insanity. The flat daisy prints—a big fuck you to the digital print pandemic—were cleverly topped off with matching 3D flower accessories. There were arm bands, neoprene leg warmers, and floppy newsboys with daisy prints, evoking the band Soho’s seminal hit single “Hippychick.” This tween fashion movement gradually transitioned into its evening version of sequined capri pants, two-inch thick bandeaus, undercleavage, track pants trimmed with fake flowers, and glimmering black raffia hula skirts. Although there’s a chance these garments will only be seen on Ashley Tisdale in US Weekly’s Fashion Police section, we truly hope Molinari keeps it up! 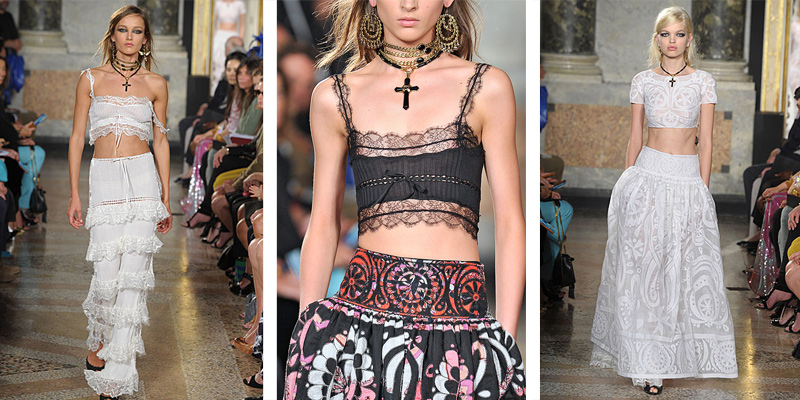 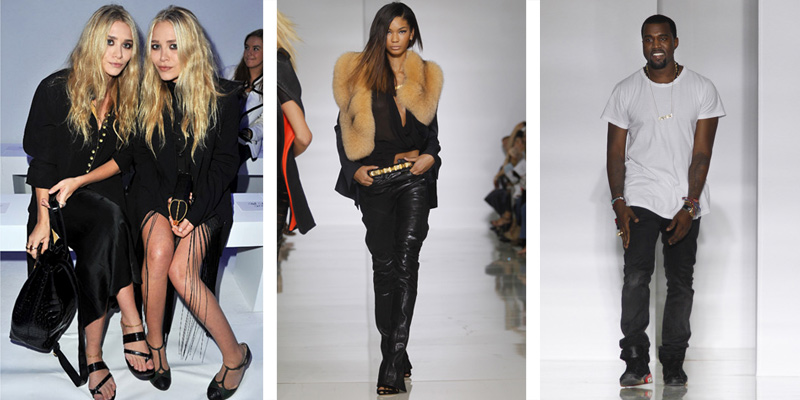 Kanye West
Looking beyond the insignificant “clothes” in Kanye West’s debut collection, this runway show was a success. A front row lineup that included Lindsay Lohan, Jared Leto, the Olsen twins, Sky Ferreira, Carine Roitfeld, and Ciara ensured that it would be talked about all over the Internet—but aside from that, the real triumph here is that virtually anybody can have a collection and show at Paris Fashion Week. Isn’t it awful? It’s Lady Gaga’s spiritual message of “anybody can do everything” and “everyone is an authority on anything” come true. In terms of celebrities, however, we would love to see this—the catastrophic, cosmic follow-up to Lindsay Lohan’s rapetastic slutway sashay at Ungaro—as a breach of the floodgates in terms of cross-cultural celebu-ture fantasy. Who might attempt a collection next? We nominate Courtney Stodden, Bai Ling, Trina, or Dennis Rodman. 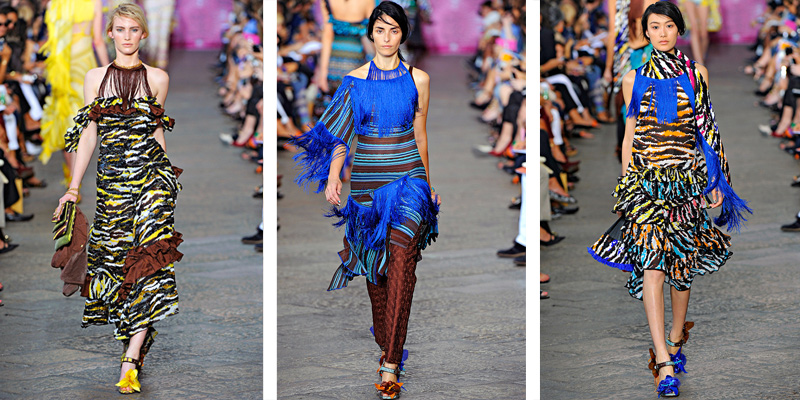 Missoni
Still got TARGET on the mind. WTF. In the past couple seasons Missoni has created incredible lifestyle collections where you really felt you understood who this woman is. One season she couldn’t stop dancing in the desert, another she was in pastel pajamas and floor length snakeskin jackets. But this season the girl is drunk. She may have already passed out and woke up puking on herself. Don’t drink Margheritas before going trim shopping. The combination of colors and patterns look like they were dragged out of wholesale remnant bins and the shapes are utterly unforgiving. Multi-tiered ruffles, fringe galore, asymmetrical everything and the most hideous zebra prints imaginable. The fringe necklace is deeply disturbing because it looks like something Urban Outfitter’s ripped off from Margiela or Helmut Lang in the mid ‘00s and now Missoni is stealing it. Actually the colors look like they could be an homage to Urban Outfitters. No disrespect for UO they’re not this bad. And it’s safe to say that Angela Missoni’s outfit is the best look on the runway. 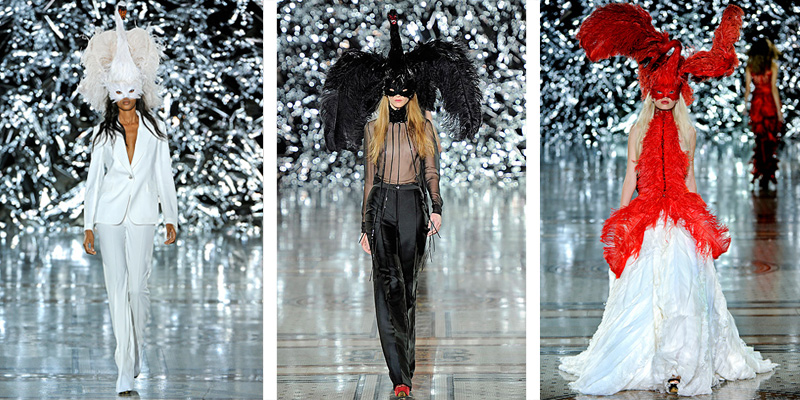 Giles
“This is so not a collection about Black Swan,” -Giles Deacon

The fact that Giles felt the need to confront this issue directly following his show really says it all. On one hand, we should probably congratulate Giles for finally having a color scheme and some thread of consistency. But this theme is literally 3 seasons ago (see Black Swan, 2010, John Galliano Menswear Fall 2011). It’s just over. Embarrassing references aside (which included the Warhol Factory because he really wanted a silver stage set), it’s plain to see this collection is just ugly. We won’t even mention the red swan, his tragic addition to the exhuasted swan canon. 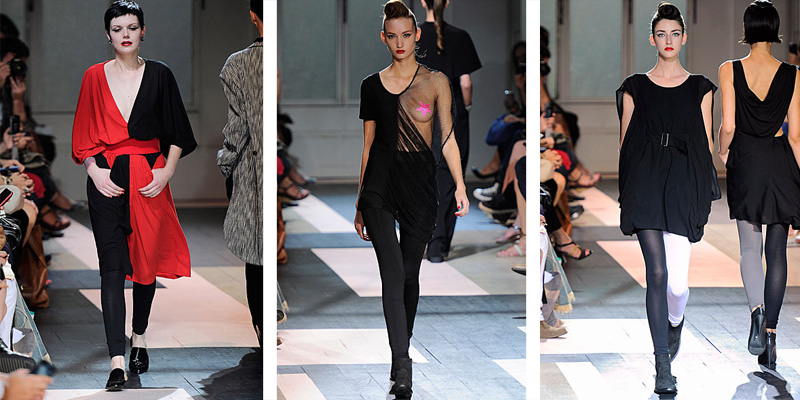 Limi Feu
Enough is enough Limi. You may think you’re cute, with a hot pink star pasty, and American Apparel two tone tights, but it’s time you dissolved the company for the greater good. Emo, Electro-clash, 80s revival is not “in” yet. Never has a designer tried and failed so hard. This is like fashion spam. Delete. 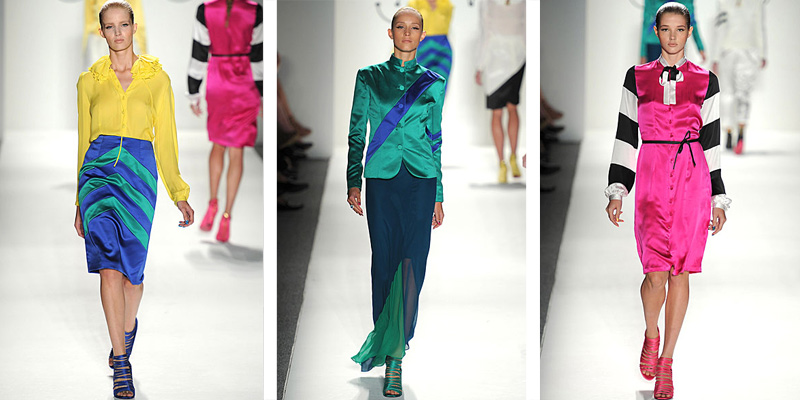 Ruffian
Sometimes we pick on the ill fated looks of an otherwise mediocre collection (see Altuzarra). But in this case, there’s not one acceptable garment. Maybe it’s the fact that Ruffian’s clothes are utterly unphotogenic, and naturally we’d never be at the show, or anywhere these clothes exist in person. We were so curious we wound up on a Fashionspot forum and apparently Ruffian is sold at Neiman Marcus Dallas, and possibly somewhere in Canada (they’re Canadian). Anyway the fact is, these appear to be the grossest, must unwearable garments ever made. We can’t even go into detail, it’s that bad. 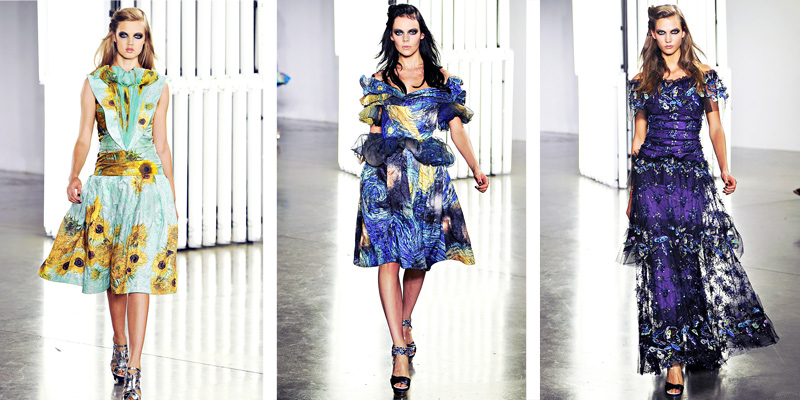 Rodarte
The Mulleavy sisters have always exuded an essence of etsy, but their craft store Van Gogh sunflower and starry night motif and bizarre Barney the dinosaur/Sleeping Beauty color regression was too much information. Some infantile infatuations should probably be kept private. The boxy cuts and conversely, flowy, semi-sheer pieces packed no potency, a difficult season to remember off the style.com stream. Considering the atmospheric settings and innovative collections of seasons past it was a generous disappointment, a simultaneous journey to both antique store geriatrics and daycare juvenalia. 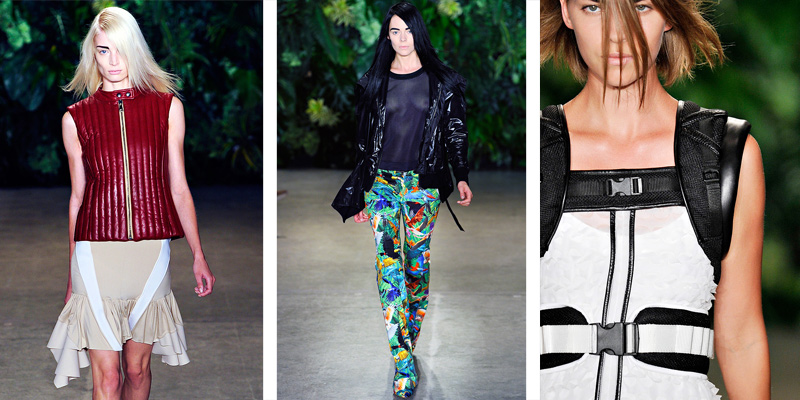 Altuzarra
Joseph Altuzarra is arguably the most hyped (and overrated) designer in New York. This says more about New York than it does about Altuzarra. It doesn’t matter if you’re indistinguishable from Doo Ri or Philip Lim because if you’re trendy, commercial and you sell at Barney’s you’re one to watch. This collection may as well have been a graduate show with the prerequisite geometric, graphic, Givenchy inspired, poorly constructed, badly designed and ill fitted clothing. Rave reviews? Really? 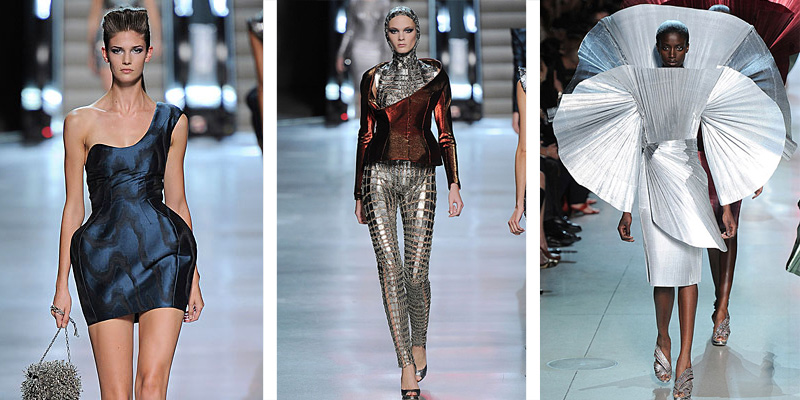 Paco Rabanne
Mansih Arora’s Paco Rabanne is the hideous result of Fashion media, Project Runway, editorial anxiety and a distinct McQueen retrospective jealousy. Ok, so he digitally mapped the body to recreate Rabanne’s classic plastic chain mail dress. Whatever! Everyone else has realized that structured exaggerated hip is not cute right now. One body-con asymmetrical black dress was split at the side with beads bleeding out. Arora is in desperate need of aesthetic guidance, a designer perhaps? Maybe he can construct giant pleated paper costumes that won’t collapse, but honestly, who cares? Maybe he should be designing for Cirque du Soleil or Carnivale. Paco Rabanne exclusively for Carnivale. Whoever has a vested interested in Paco Rabanne’s successful revival better wake up and hire someone with taste.