Wapato prison is a maximum security facility built 9 years ago in Portland, Oregon. After it’s completion in 2004 Wapato was abandoned due to a lack of operating funds. It has been idle and in pristine condition for 10 years and has never once housed inmates, remaining empty aside from a small janitorial staff that maintains the plumbing and washes dusty bed sheets. Occasionally a film crew is allowed to enter for a small fee.

To carry out Centers In Pain, Jasper Spicero rented Wapato for 4 days. The project culminated in a short film, a screenplay for an imaginary movie, and documentation of the sculptures installed in the prison.

EVERY STORM RUNS OUT OF RAIN

AERIAL SHOT A half-built housing complex. Flying away it
becomes visible that the roads and cul-de-sacs form a simple
flower shape. Like a child’s drawing. At the center is a
tower. 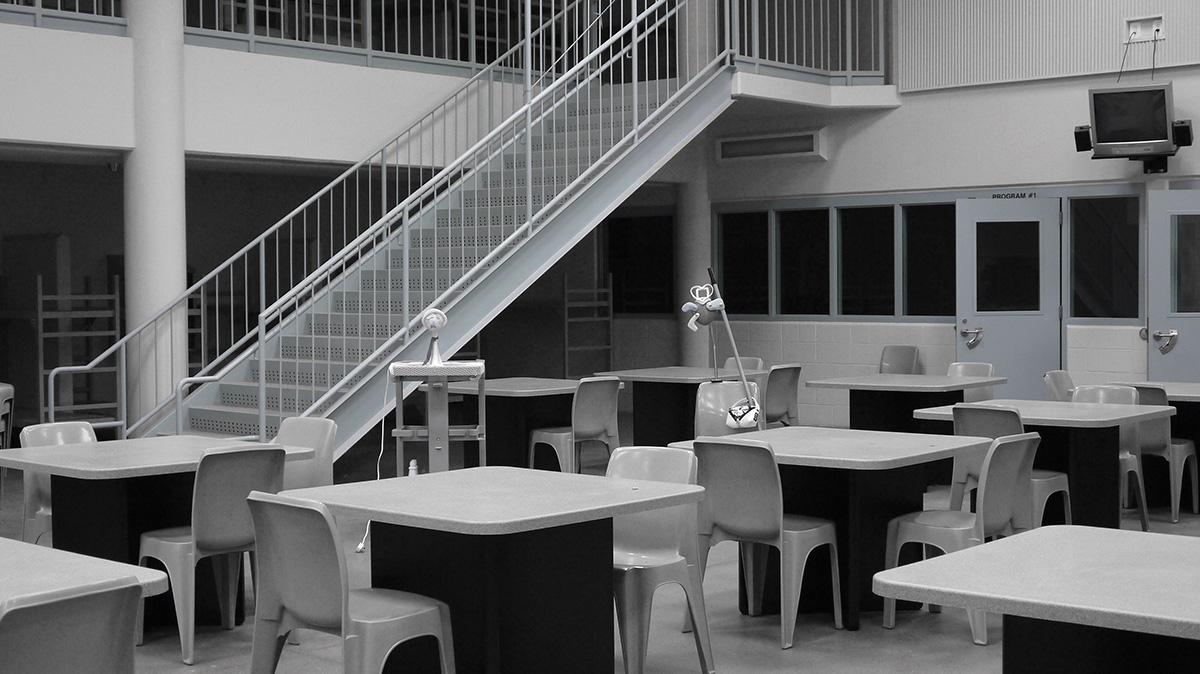 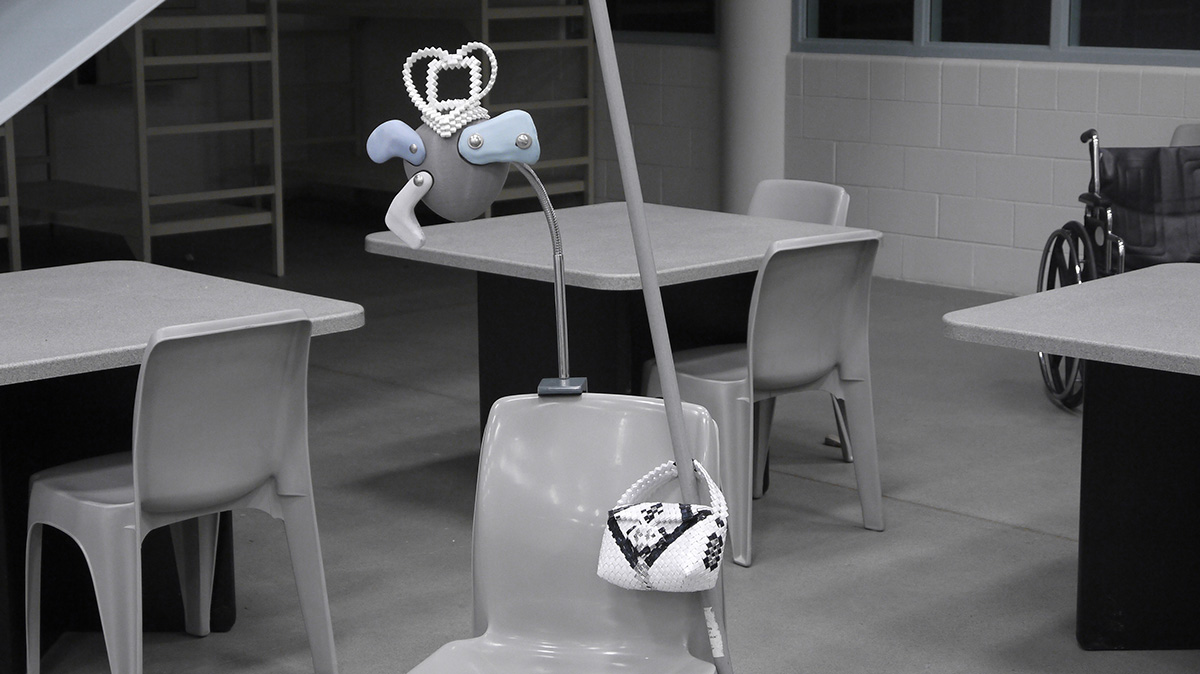 This house, like all the others, is plastic white with blue
and grey details. Piles of old snow in the yard.

The front door has a hexagon window covered by black plastic
from the inside. Someone opens the door. It is a boy, 5
years, with grey eyes, wearing denim overalls.

A jacket lying on the ground with a badge sewn to the arm
that reads ‘JUDITH 14’. The boy’s shoes enter the frame.
He picks up the jacket.

MARTHA O.S
from inside the home
Where is my little star?

Judith walks away from Martha’s voice toward a modular
storage unit. 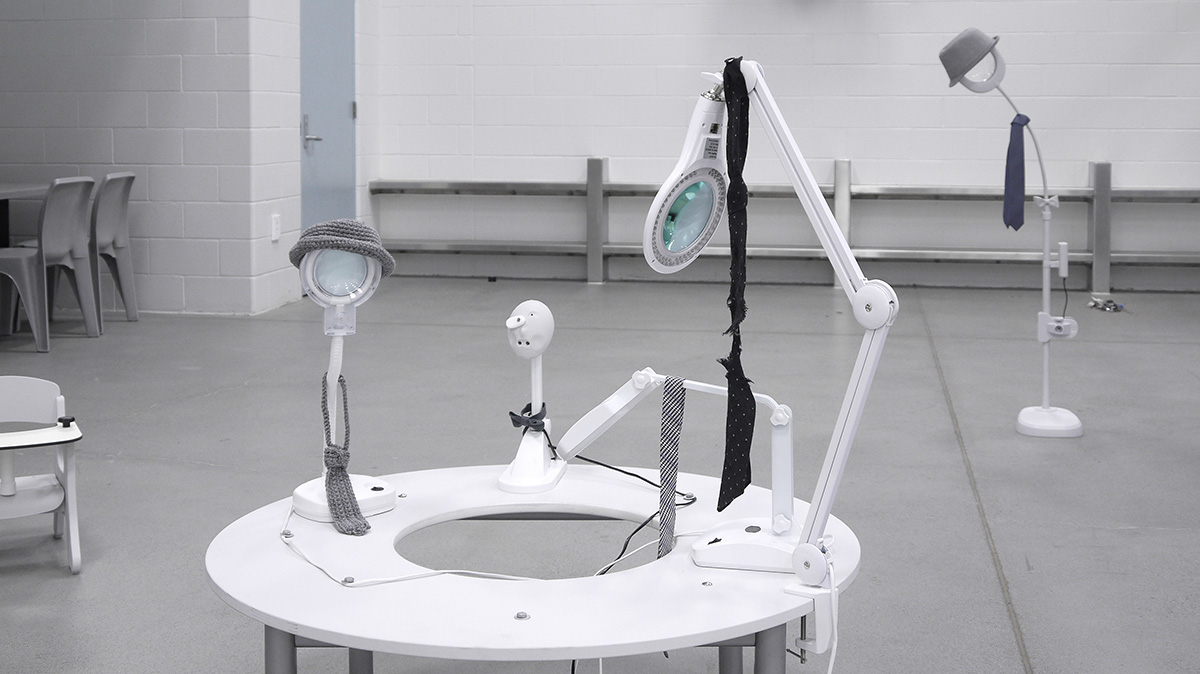 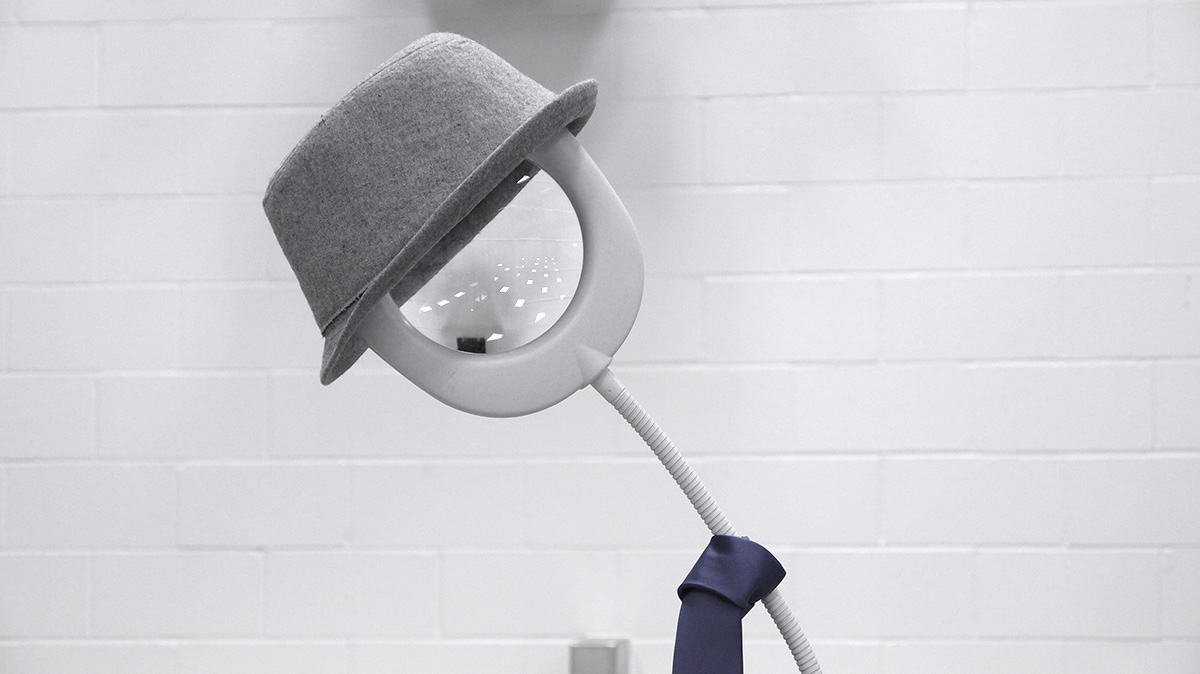 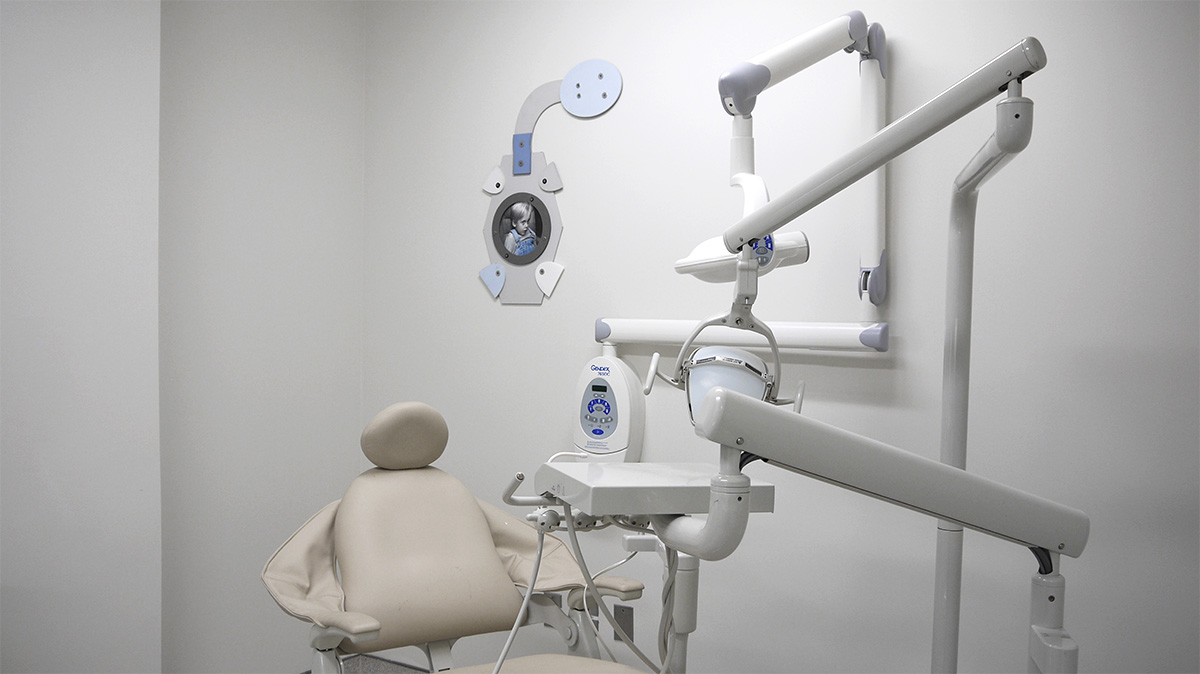 Half-melted snow with footprints. Trees tangled in dead
vines. It is raining.

We follow Judith into the woods. He is now carrying an entry
shotgun. Shoe laces dragging behind him through slush.

LISA O.S.
If someone is there, please help me.

We see LISA through a layer of old growth woods.

LISA
I’ve been wandering around here
for days.

Her running clothes are distressed. She is wearing
black earphones.

JUDITH
There is a road close by.
You’re going to be alright.

Lisa staggers behind him exhausted. After awhile Judith stops.
Turns to her.

She steps backwards and trips over a tree branch. A single
earphone falls out. We hear the faint sound of ‘Shane’s Theme’.
Holds her hand up like shielding her eyes from sunlight. 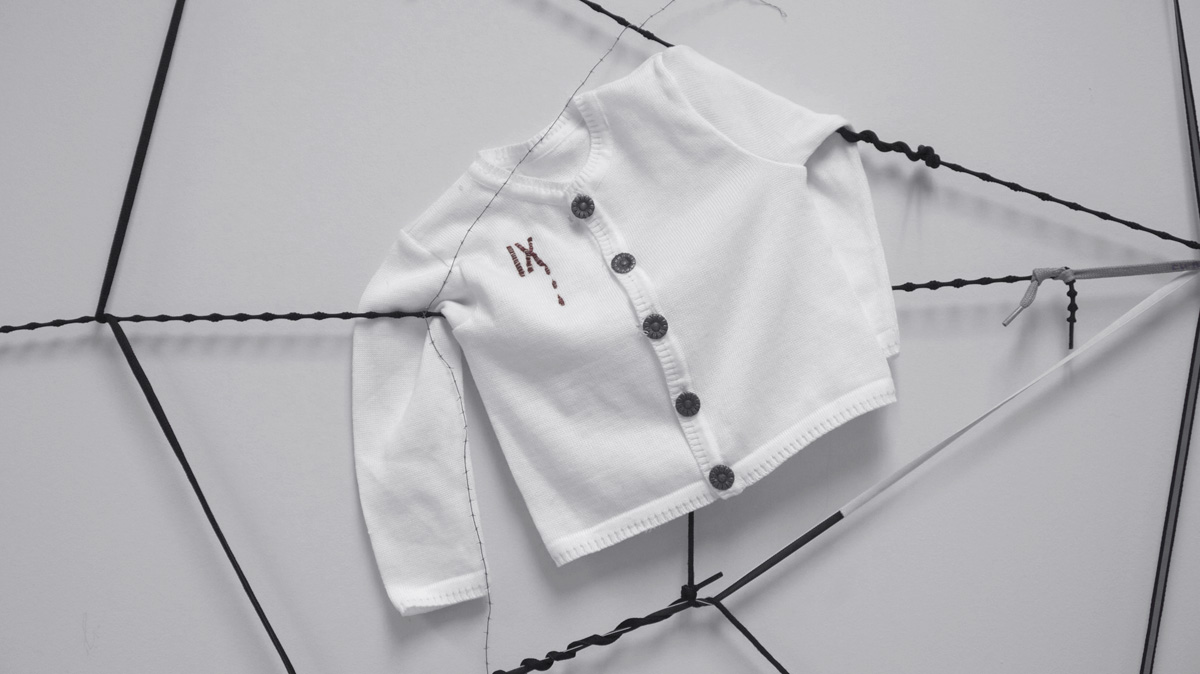 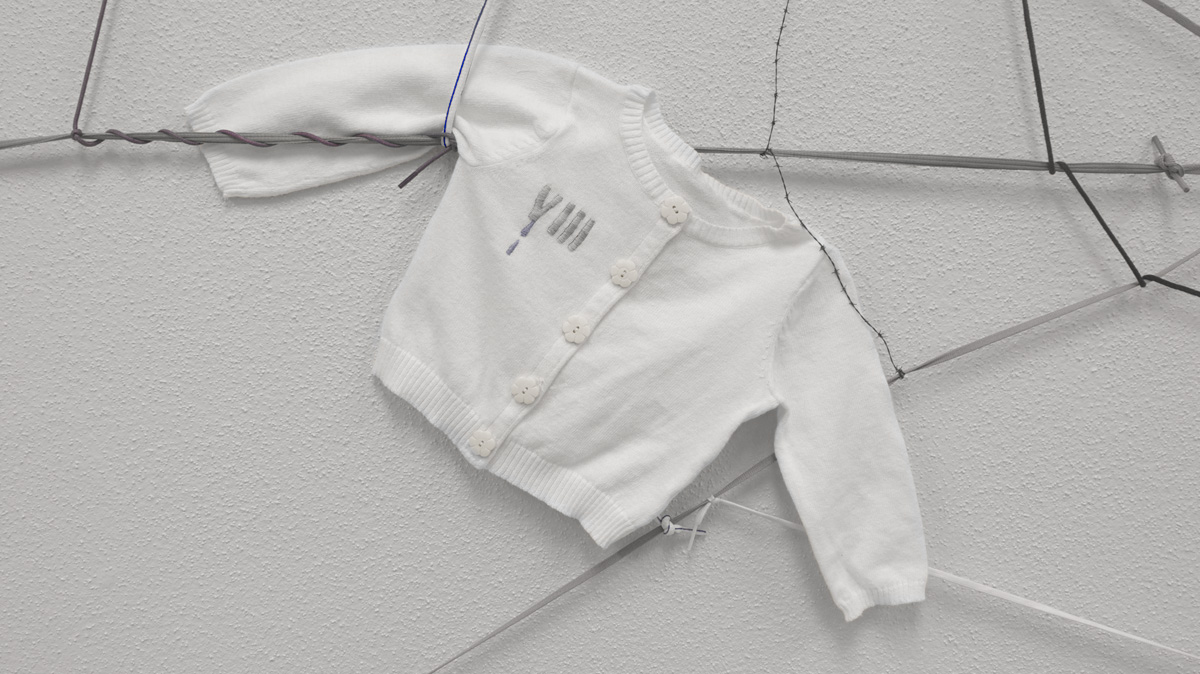 Through a honeycomb shaped window on the second floor we see
Judith emerge from the woods wearing black earphones. His
jacket is missing. He kneels to tie his shoes.

YOUNG MAN V.O.
Wapato is a jail built 9 years ago.
After its completion in 2004 it was
abandoned due to a lack of operating
funds. I’m one of three maintenance
workers at the facility. A 10-ton iron
sculpture that looks like the skeleton
of an oil tanker is sinking into the
courtyard and destroying the
underground drainage system that
passes sewage to the nearest waste
resevoir. 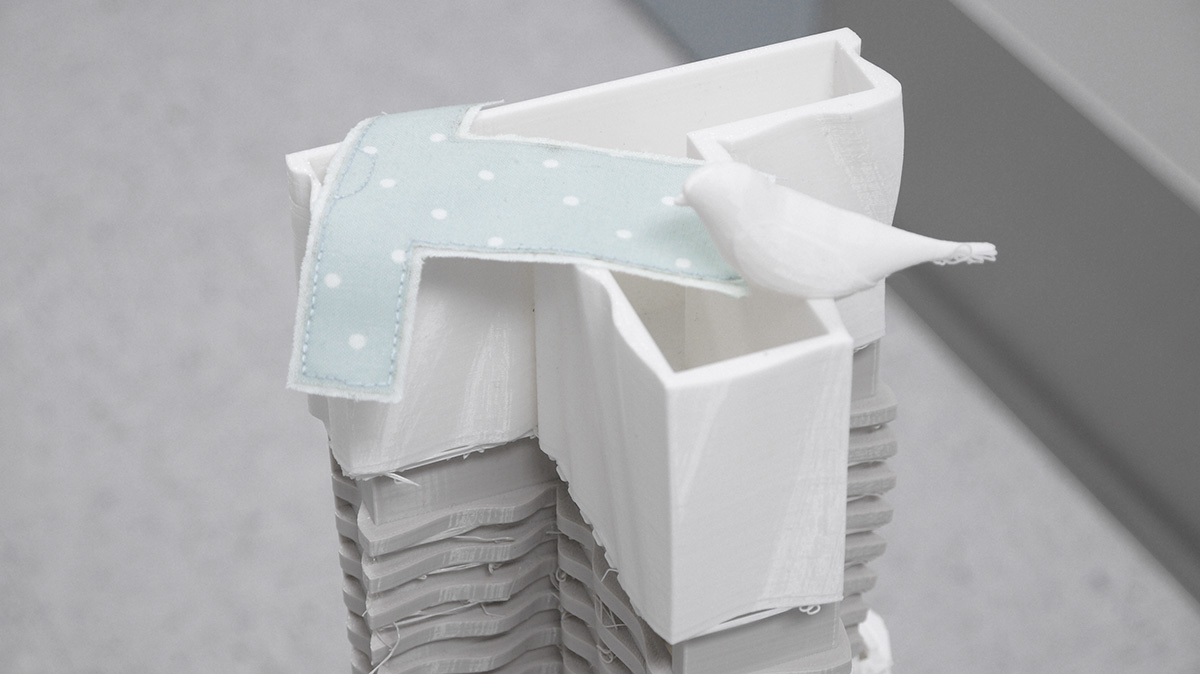 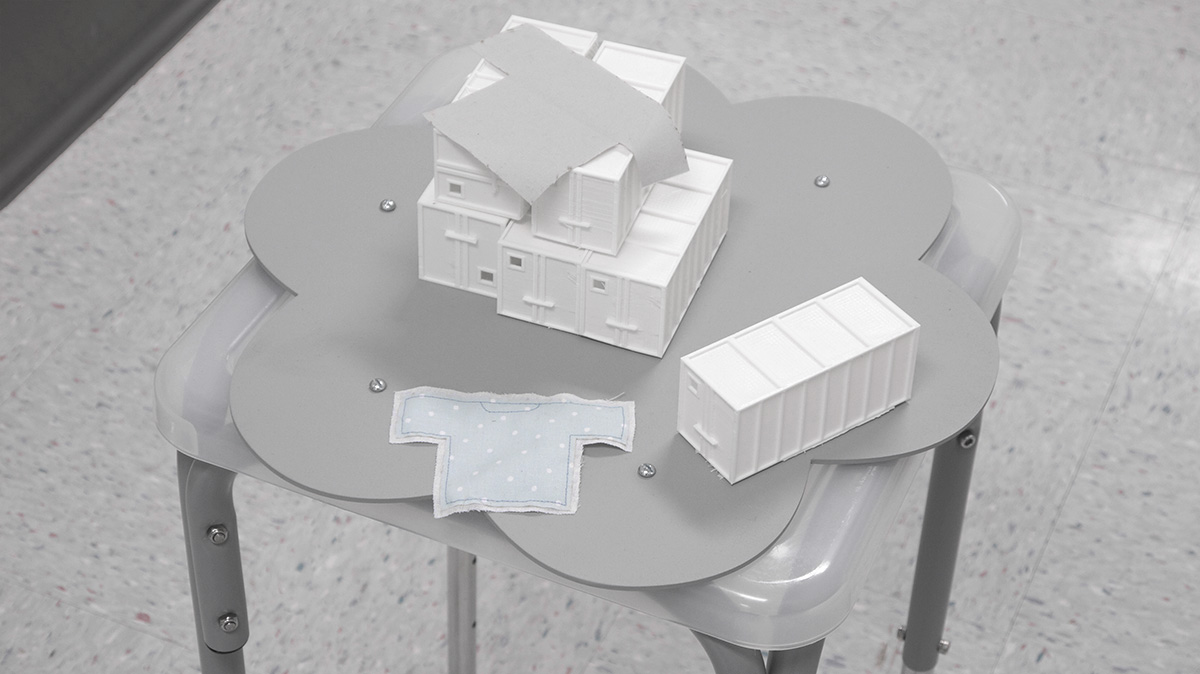 A DROP OF MEDICINE

Martha sits staring into space on an aging designer sofa for preventive medicines.
She is mid-forties, blond hair, wearing a ragged shirt and
blue jeans.

Hands in her lap with spots of pale light from an open
window nearby.

Judith is stopped halfway down the living room staircase
turned toward Martha. She is frozen in thought.

JUDITH
Martha, have you seen Beatrice?

He descends the staircase and stands by her side.

He grabs her leg and shakes it. Martha squints as though she
just woke up. Shields her eyes from the pale light with a
throw pillow.

MARTHA
What did you say little saint
Judith?
JUDITH
I haven’t seen Beatrice for a
couple of days.

Sets the pillow onto the floor. Kneels to Judith’s height. A
cloudy look on her face like a hospital patient’s. Places a
slender hand on his shoulder.

MARTHA
The world is sick Judy. Everyone
is a drop of medicine. Even you
a tiny star.

We hear the sound of a faucet turning off and on in the next
room.

The kitchen sink sprays water than abruptly stops. Starts
again. Stops. Above the sink is a window without glass. Snow
is falling. A plane goes by. 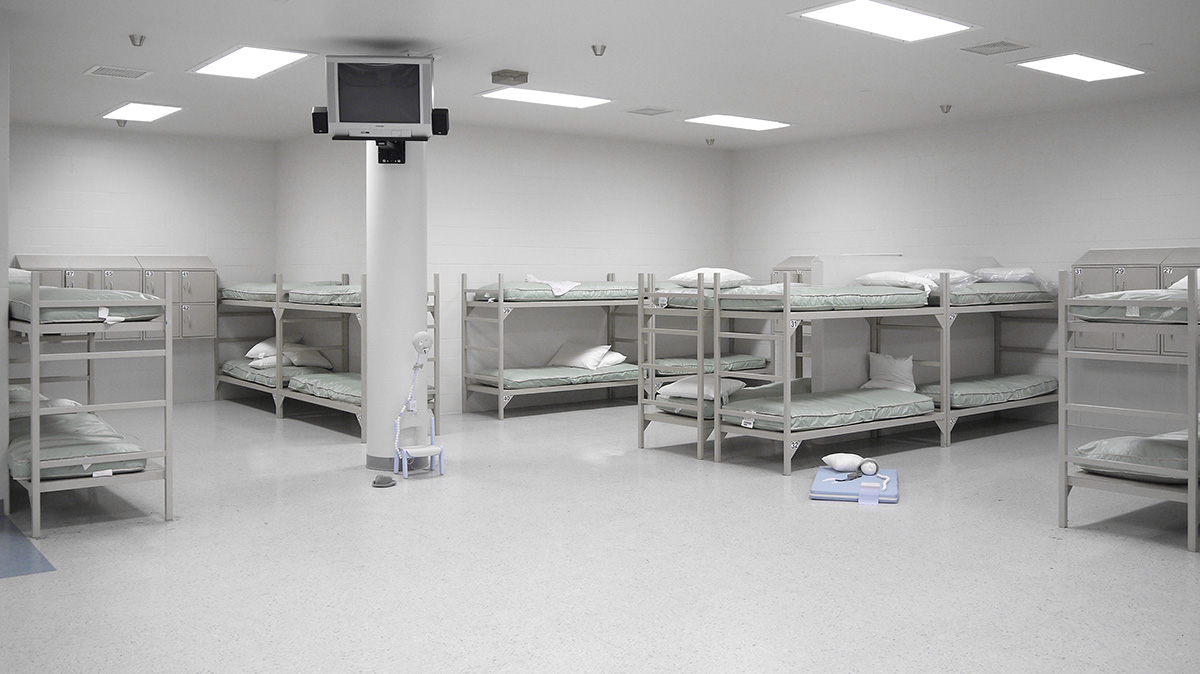 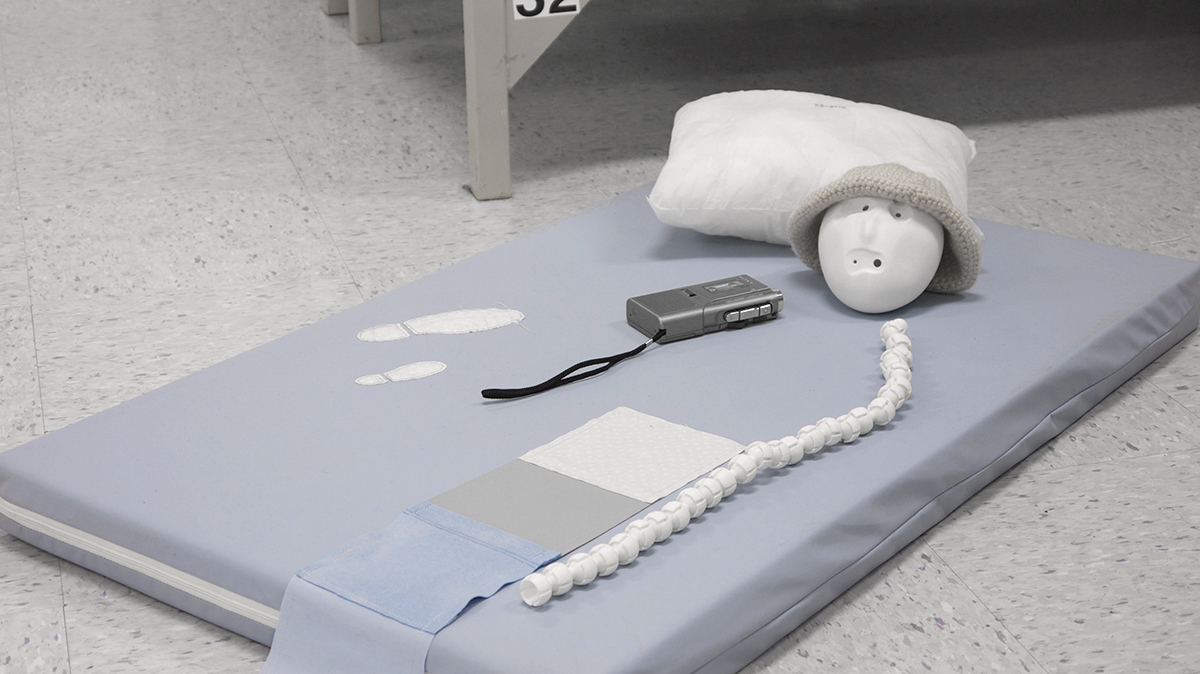 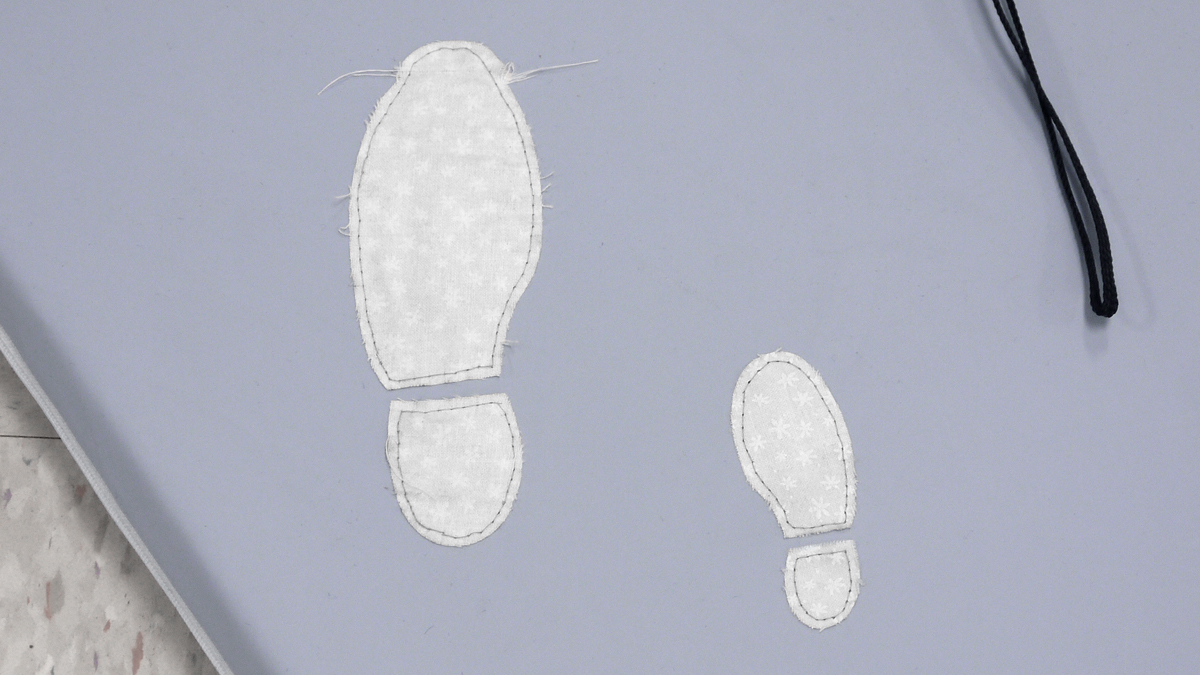 BLOOD IN THE SNOW

A young man standing in a snowy driveway. This is Shane.

VAGRANT O.S.
My family is at 43 on the other side
of the tower. We need food. I have a
son, Carl.

PAN FROM SHANE TO VAGRANT:

Lying on the ground. Blood dripping from his nose. One eye swollen shut.

Judith lying in his bed listening to a hand-held tape recorder.
We hear a voice through the speaker.

LISA V.O.
I was 11 when my real dad showed up at our complex. We were eating with my stepfather, Carl. My dad banged on the door and when Carl answered my dad dragged him out into the snow. He started hitting him in the face and wouldn’t stop. I’ll always remember the blood in the snow.

Judith stands up. Passes by a bedside table with a picture frame
turned face down. Walks to his window to see Shane
towering over Vagrant.

SHANE
You are Weak. Like birds are weak.
You let Flower Complex change you.
VAGRANT
Don’t do this.

Honey approaches Shane and places a hand on his shoulder.
She is tall with long, brown hair in a pony tail.

HONEY
He doesn’t want anything from us.
SHANE
If I let him go he will come back to hurt
you or Judy. He’s obviously lying. I wouldn’t
hurt him if he needed food for a hungry child.

Still image of Shane with Honey behind him. A number eight
Tattoo Aftercare. His eyes half open. 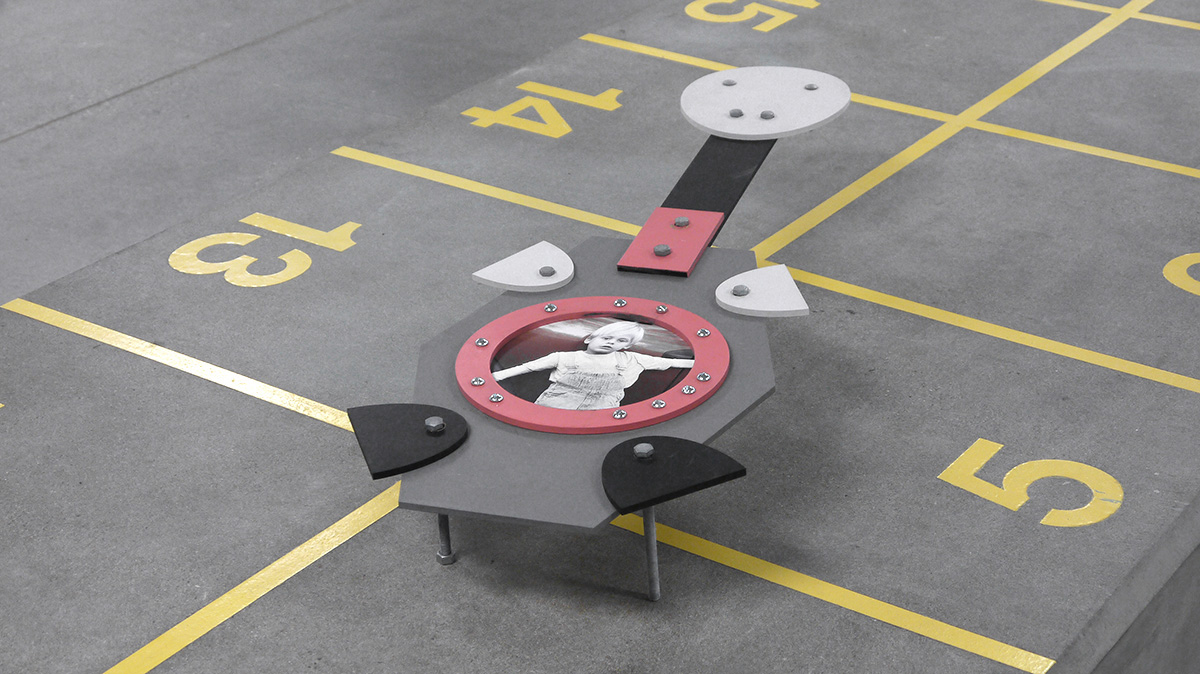 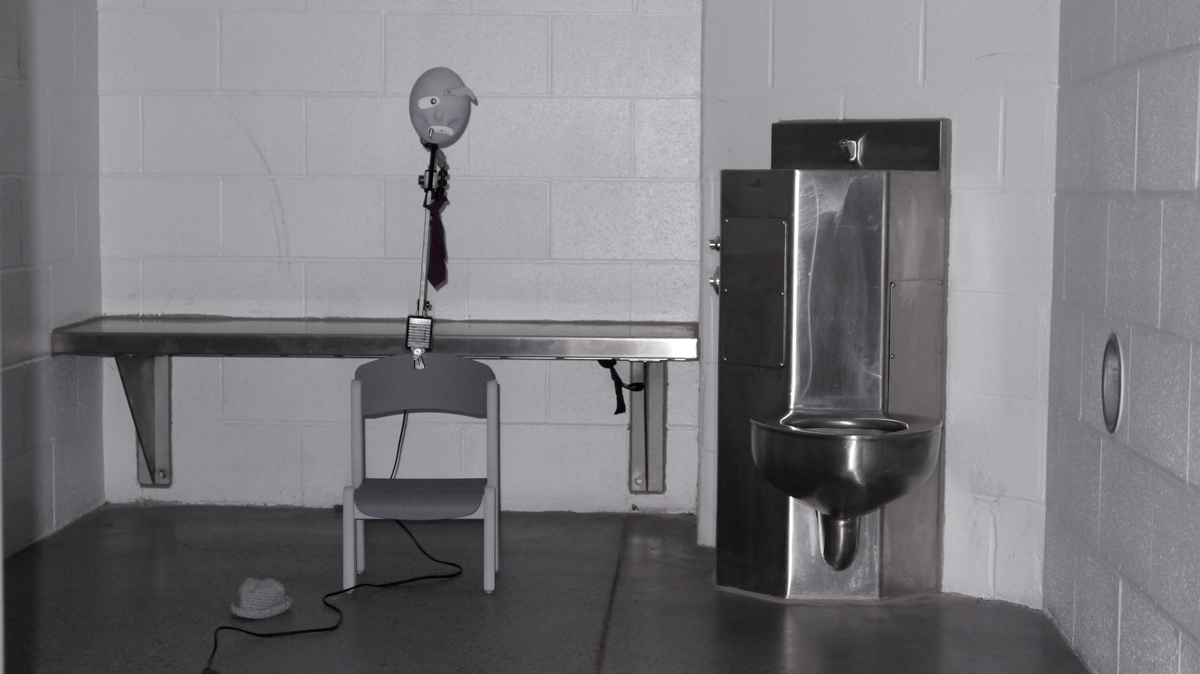 Two men inside a moving black sedan with dark windows. Beige
leather interior. The man in the passenger’s seat turns to
his partner.

DETECTIVE 2
You’ve been here before haven’t you?

DETECTIVE 2
My sister used to walk here when
we were kids to stargaze from
up in that tower.

The detective’s pull into the driveway. License
plate SG13 71U. Honey’s face watching them through the
hexagon window on the front door. They get out of their
vehicle. DETECTIVE 2 lights a cigarette.

WINTERS
We aren’t here to discuss the
bloody snow in your driveway.

She cracks the door.

HONEY
Then why are you here?
WINTERS
A woman has gone missing.
Her name is Lisa.

Honey sits opposite the detectives. WINTERS is holding a
cup of coffee.

DETECTIVE 2
Where is your brother?
HONEY
Shane’s probably at VIII.
DETECTIVE 2
Do you know what he does when
he goes to COMPLEX VIII?

WINTERS spills coffee on his tie. 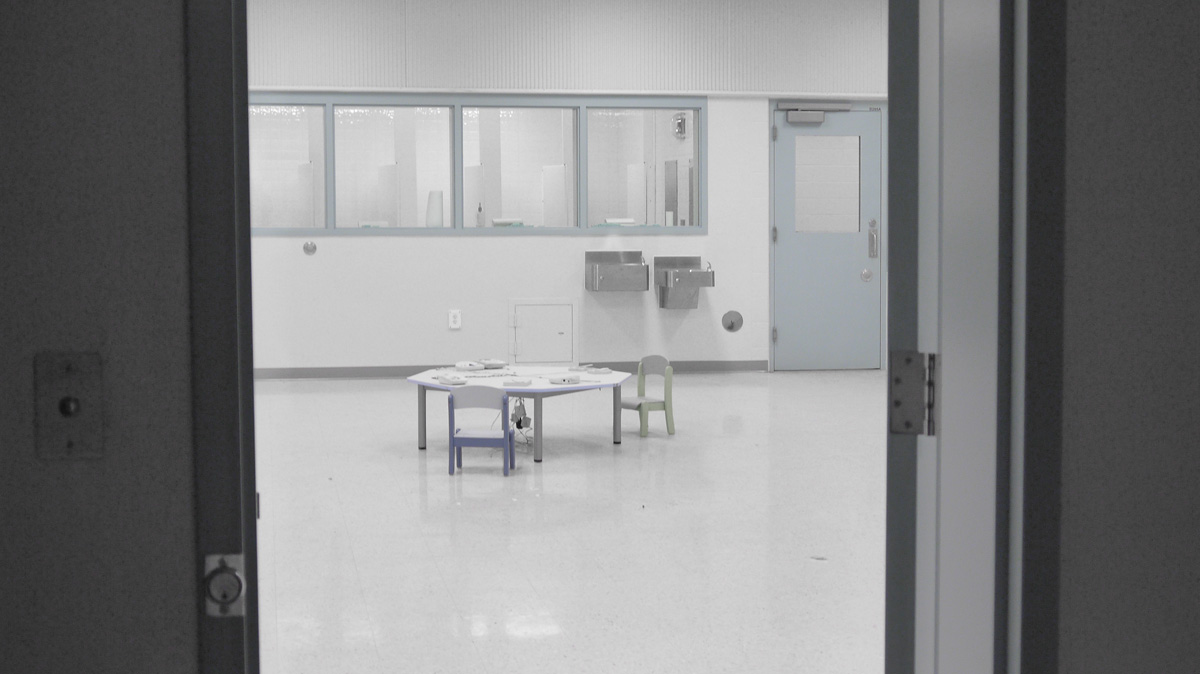 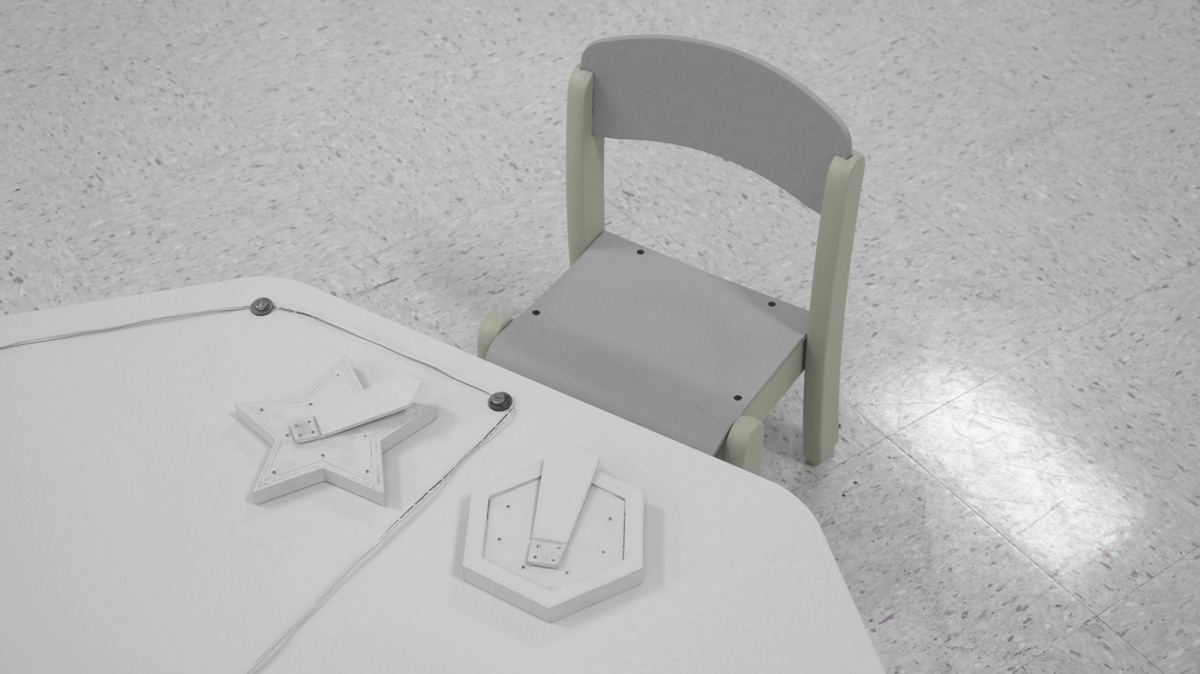 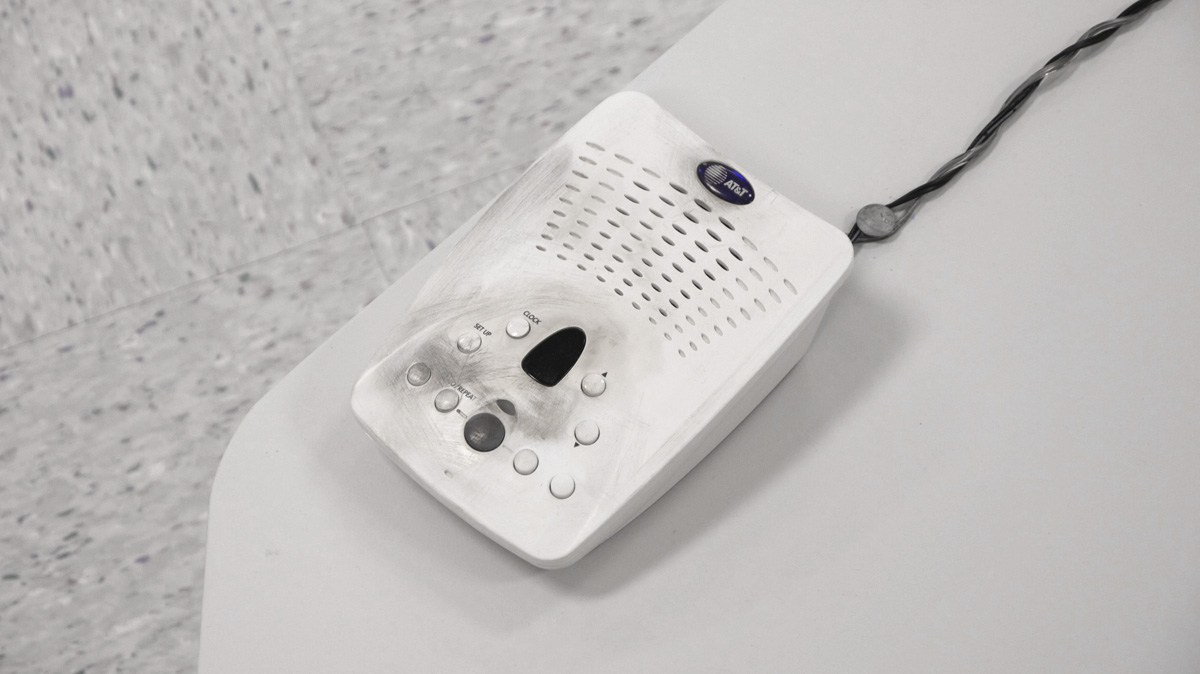 Shane is kneeling beside a slim rectangle table pushed against
a wall near the front door.

LISA V.O.
Hi I’m not here right now and neither
is anyone else apparently. Which is
strange because we usually are here
but not today. Anyway, leave a message
and I promise that we will get back
to you.

He grabs a tangle of chords from beneath the table and pulls them
toward his chest. 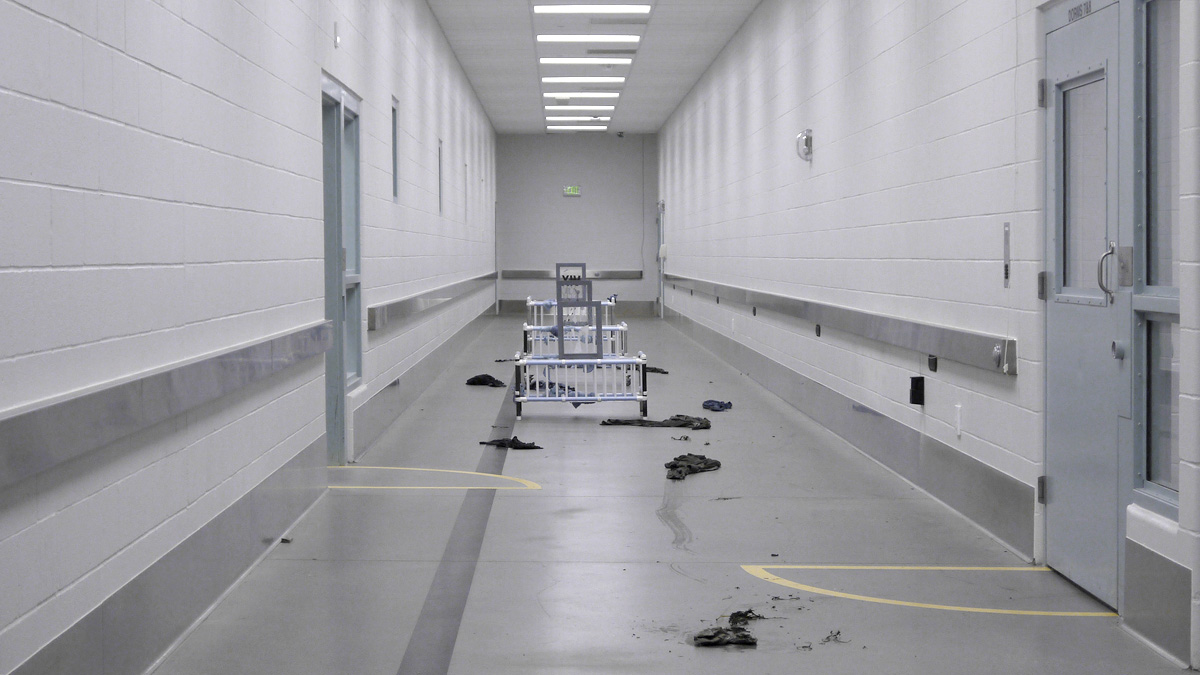 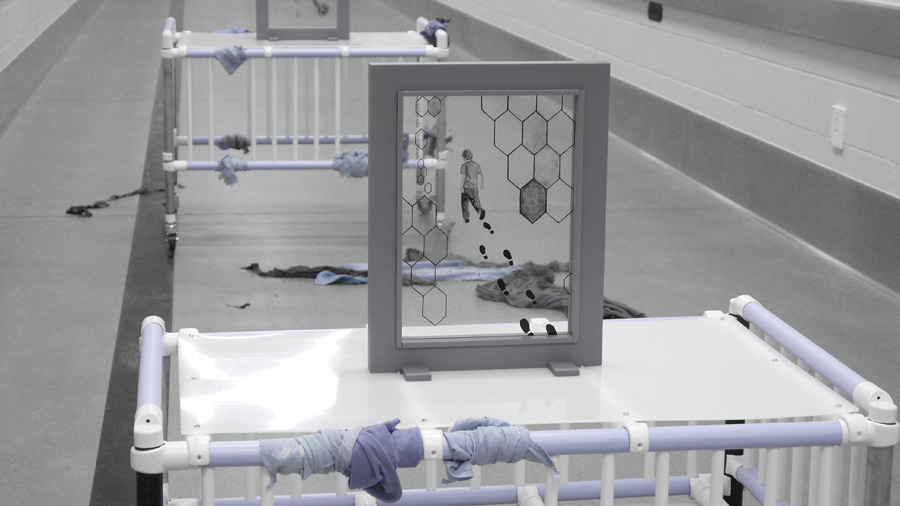 Still image of a younger Martha sitting in the backseat.
She is wearing a black turtle neck underneath a spinal
brace that looks like scaffolding.

MARTHA V.O
I was a proctor at St. Jude for the
better part of my life. One boy was
especially bright. I can’t remember
his name which is strange. I usually
remember the names of my patients.

Construction workers wandering around with rolled up plans.
Martha at the base of the tower looking up.