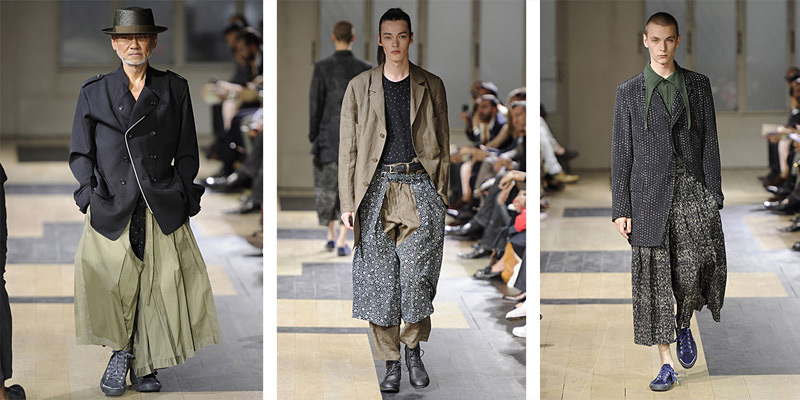 Yohji Yamamoto
Yohji has always adored a loose, cropped pant, but this season the designer turned the traditional Japanese hakama into high-performance leisure gear. The new hybrid emerged as both a kilt and chaps, layered over pants, suits, and shorts alike. Protective gear morphed into breezy anywear—dare we call them a “freedom pant”? Finally, a billowy liberation has come for the fashion-conscious man that can transition from a protective layering to a beachcombing cooling option over shorts. Merge this with unassuming prints and liquified point collars, and the options appear endless. Every designer aims to expand the vocabulary of his or her brand with each passing collection. Yamamoto succeeds in expanding consciousness. 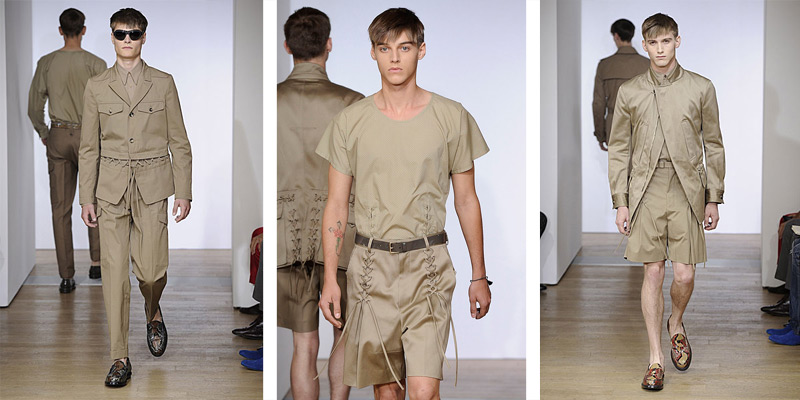 Yves Saint Laurent
We’re generally bored by Stefano Pilati’s recent attempts at YSL, but this collection showed he’s been working hard—perhaps he’s finally suffered a spell of some creativity. While still on the cautious side, Pilati subtly innovated his male wardrobe with laces and snakeskin, revealing that there is a hint of Roberto Cavalli in us all. The head-to-toe khaki compositions were some of the best bets of the season, and included sharp lapels, clean lines and intricate lacing cinch work. Even the models’ blond hair was feathered to perfection, complimenting the neutral chromaticity. The result was “Ivy League Googles Ibiza.” One could say Stefano Pilati is a straight-laced, zipped up, top-button-always-buttoned type of designer, and often it’s to a fault. Here, however, his militant conservatism was tempered by Italian coastal tannerism, making this collection a first resort. 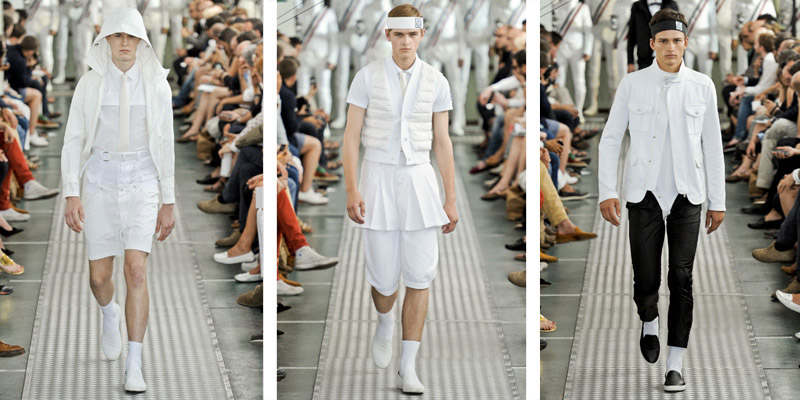 Moncler
Somehow the passé athleticism of fencing brought new life to Thom Browne’s Moncler this season. God knows this queen is always looking for new ways to subvert menswear, and of course, it’s a relentless shit show when it comes to styling. Still, the primarily bright white and cream collection displayed wearable and wacky proportions. A polo shirt and tie with a shrunken puffy vest worn with a pleated tennis skirt over mesh knickers was surprisingly on point. The pants with simultaneously high and low waistbands were smart and well constructed. Of course, the most interesting pieces—not to mention all of the heavy fencing garments—will likely get thrown out before production. But Browne is certainly doing his part to raise Moncler’s profile by putting the poof into the puffy coat marketplace. 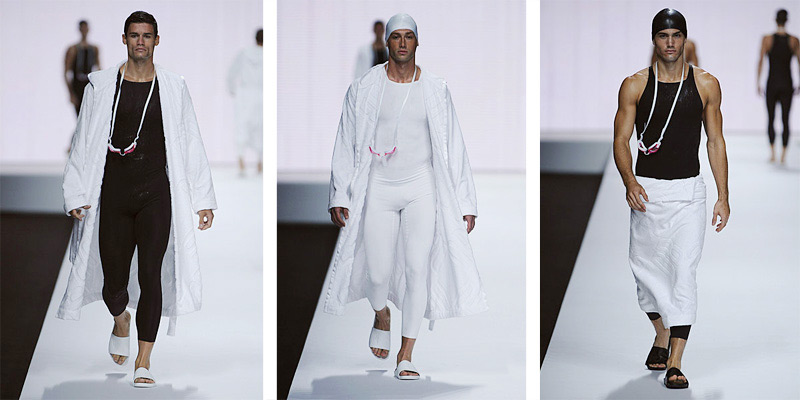 Dirk Bikkembergs
Once again, Bikkembergs brings a Chelsea lifestyle to the forefront. Could it be that his gym accoutrements are bringing in the real money these days? Beefy models came out nude in towels, in swim caps, goggle necklaces(!!!), and anti-bacterial slides. The truest spring look emerged in the Sibylline form of a white spandex catsuit under a lightweight Bikkembergs-monogrammed terrycloth robe. If there is any sartorial justice, the designer’s hardcore Italian fan base will be swiftly taking this look from the infinity pool to the streets in 2012. 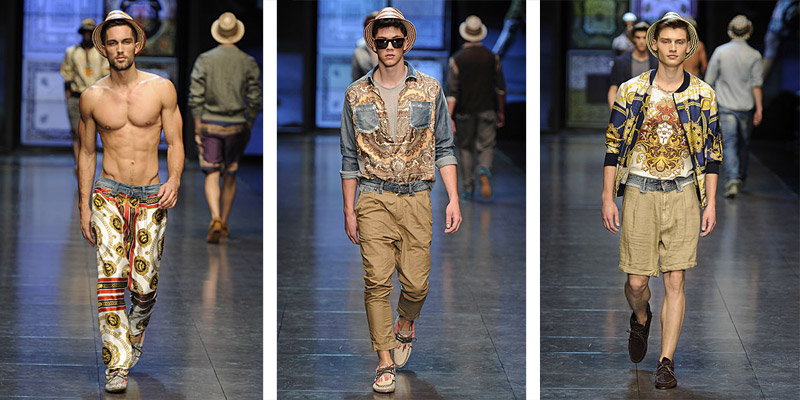 D&G
You know this is trending somewhere right now. It could be in Russia, China or in the Gulf but it’s undoubtedly a huge commercial success somewhere and we probably don’t even know it. We suspect Domenico Dolce and Stefano Gabbana have been binging on Kuwaiti “couture” catalogs because there is an over-the-top designer-y-ness to the treatments and collage of materials that we’ve rarely seen in western fashion. It looks like D&G have actually knocked off themselves—and this season’s trendiest reference, Versace archive—to appeal to emerging markets. Perhaps the most impressive however, were the denim waistbands that were attached to every pant and short regardless of their own material DNA. 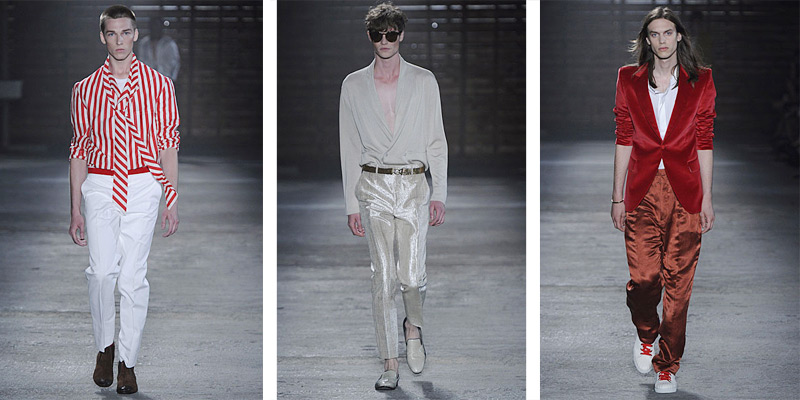 Alexander McQueen
This is unfortunate. Sarah Burton’s take on historical menswear and the cliché of the Englishman is underwhelming and confused. Was the design team instructed to duplicate a random pile of vintage clothes from Beyond Retro? We’re actually positive Christophe Decarnin designed this collection. There was a clear Balmain trickle-down of ’70s rock ‘n’ roll in the sparkly pants, velvet blazers, silk shirts that tied at the neck, chain embellished blazers, and the reckless abuse of red and white. There was even a tailcoat in a muddy mauve worn with striped elastic-waisted pajama pants. Question: Was Austin Powers sent to 18th century Turkey and then recalled to get his coke dick sucked in a disco harem? Better question: CAN SOMEONE BURN THESE MOOD BOARDS OR RETURN THEM TO BE LOST FOR ETERNITY IN THE CRYOGENICS LAB FROM WHENCE THEY CAME? IMMEDIATELY? 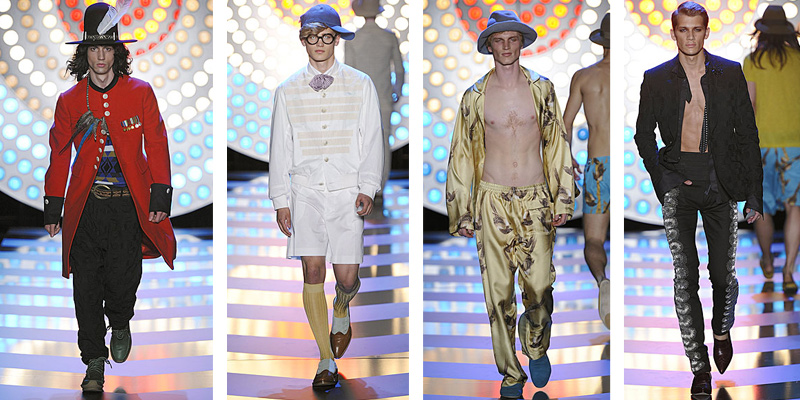 John Galliano
This collection was broken up into four distinct groups. The first was a sad rendition of the ousted Galliano’s classic bohemian, Edwardian aesthetic, accented by too many Sgt. Pepper jackets. The second was a confusing poindexter portrayal that was so devious and over-stylized it became a caricature of itself (see: floppy bow ties, David Hockney personality glasses, Thom Browne shorts with knee socks and indefensibly infantile sideways baseball caps). Next up, a series of silk pajamas, boxers, and briefs came with floppy felt hats: ideal for ’90s date rapists and drug dealers straight from the San Fernando Valley. Lastly—and with no transition at all—came the inexplicable Spanish matador. Perhaps rather than mock the flamboyance of its namesake designer, the Galliano brand should bite the bullet and bring him back. 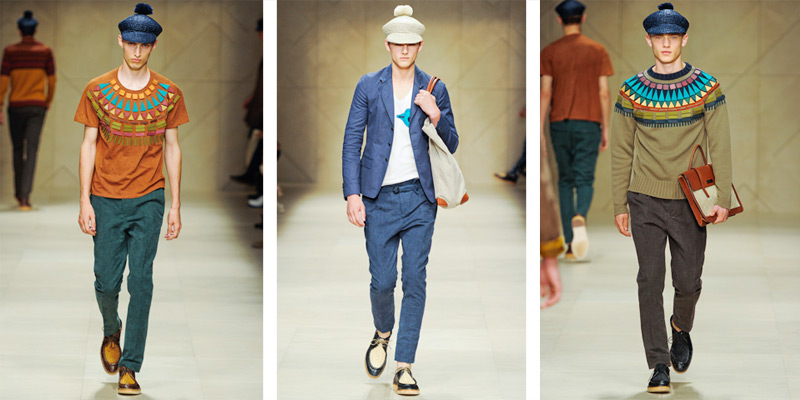 Burberry Prorsum
Of several, the most profound mistake here was the misguided impression that pom-pom golf hats should be produced at all, not to mention their subsequent pairing with almost every look in Christopher Bailey’s collection. Upon viewing them, it’s hard to avert your eyes away long enough to process what’s happening with the clothing they accessorize. Of course, this turned out to be a clever tactic since the collection was a disaster. Cowl-neck sweaters and ultra-funky ’50s era prints and appliques abounded. Bailey’s obvious attempt to prove the Burberry brand’s foundation in craft-making manifested into a mirror upon the kitsch culture of Marni. The Burberry team needs put the tote bag down, run to the nearest sand trap, and pray to Kokopelli for a divine vision that includes a new stylist. 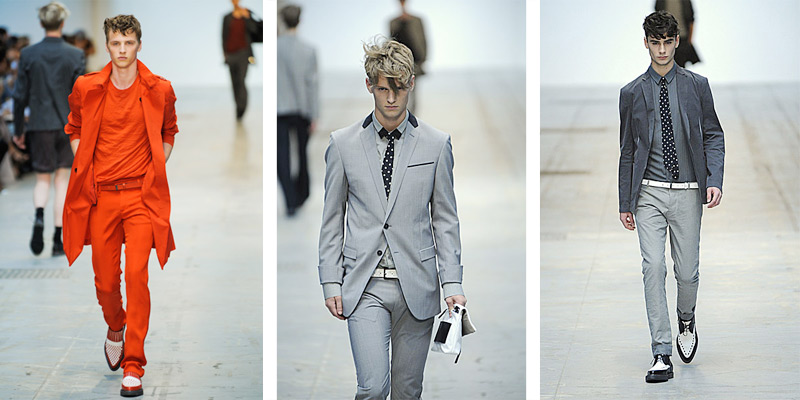 Costume National
This season Costume National showed the most regressive menswear collection we’ve seen in recent years. A sudden stale homage to Hedi Slimane circa spring 2006 was totally uncalled for. No one needs a skinny white belt, a skinny polka-doted tie, or red and white checkered ultra pointy creepers. Perhaps Electroclash will come clubbing around the bend, begging for a cocaine-fueled comeback. But for now, it reads as too transparent, too soon (will it ever not be?). You can make a tax-deductible Rename Token donations to this LiveJournal-profile of a collection at stop_listening_to_The_Hives@dismagazine.com. 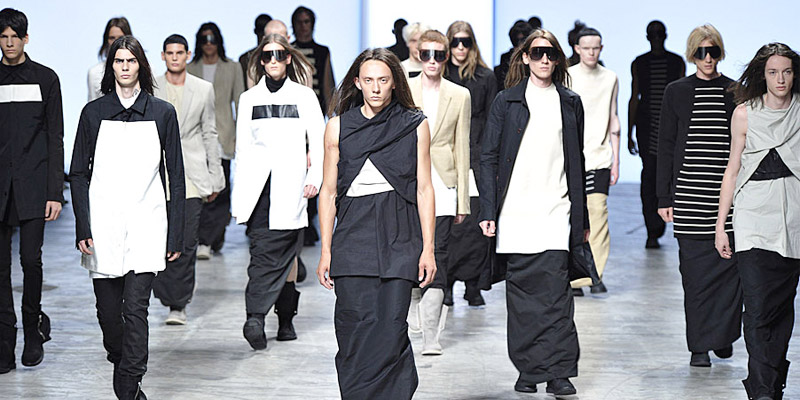 Rick Owens
This season Rick Owens’s true colors shown dull. Just look at this group finale. It’s just a series of bad shapes, awkward cuts, thick stripes, pointy triangles, and shamelessly graphic black and white. It’s the fashion equivalent of sleep paralysis. Humorless, moribund male models creeping slowly towards you so they can crouch on top of your chest like Gollum and whisper only sibilant consonants into your eyelashes while you gasp for air and mentally recite 34 Hail Elsa Schiaparelli‘s. They want a slit in the back of their skirts so they can reach you sooner; you want to slit your wrists so it’ll be over before they do. And Rick Owens sits in the box stage left, draped in fabrics that don’t even exist yet, wringing his sinewy hands in delight. Never has the purveyor of luxury neo-goth exuded such conspicuous trend consciousness. Just look at those blinders. His cup Gareth over.