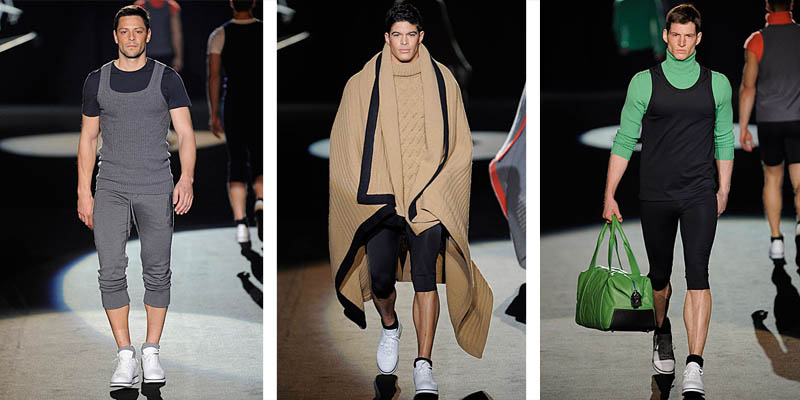 Dirk Bikkembergs Sport Couture
Dirk knows you can’t wear skinny jeans to yoga! If Kim Kardashian designed a menswear collection, this would be it. Innovative workout options include body-con tank tops over t-shirts, cable knit sweaters under tank tops, blanket-towel hybrids and the always-flattering capri legging. Sleeveless outerwear reinforced that the biceps are of supreme importance to a man. The molecular prints announced the Darwinian undertones for anyone who missed them. This collection is definitely THE FITTEST. 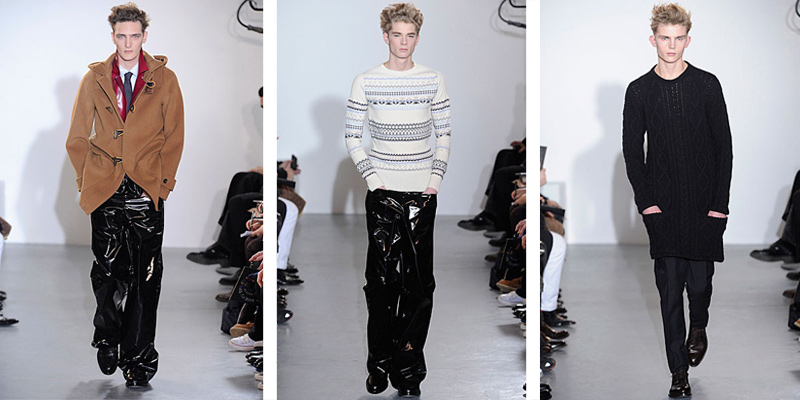 Raf Simons
Tight alpine sweaters with wide-leg black PVC pants is the cyber-winter wardrobe that should be gripping millennials this season. Raf’s twinky Scandinavian collegiates paired elongated knit sweater dresses with slacks and carried blankets that matched their outerwear. He nailed the perfect length of topcoats and sweaters this season—everything knee-length! Texturally speaking, Raf diversified with cable knit, neoprene, mohair, and high-gloss vinyl. There’s actually something for everyone in this collection—even graphic tees, if that’s your thing. 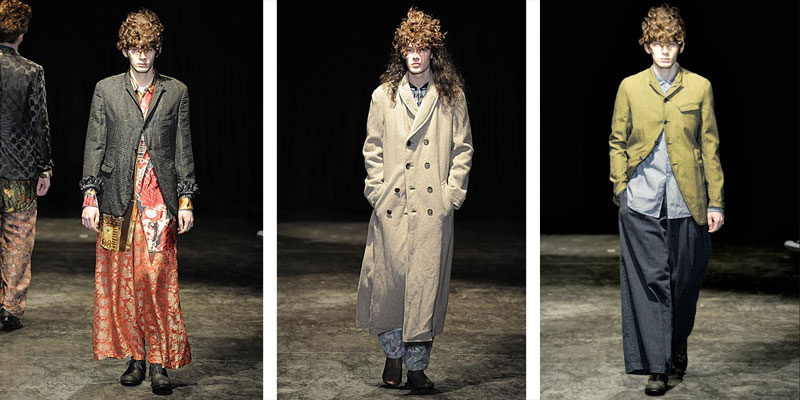 Comme des Garçons
You know that guy! The kind that puts a Chinese-embroidered, Edwardian-cut silk jacket over his pajamas of a t-shirt and wide-legged floral trousers, adds a wig as a hat, and throws a wrinkly floor-length wool coat on top to go buy beer? He’s hot. This collection broke fresh ground in depicting a contemporary lifestyle of laziness—a lush, exotic, and sexy laziness. The lethargic fabrics and easy cuts were augmented by dirty blue and sepia denim versions. Kawakubo finally gave the Edwardian cut a purpose, to showcase the long, untucked, haphazardly buttoned, and sometimes stained shirt that conceals the waistband of chunky, short denim palazzo pants. Of course! 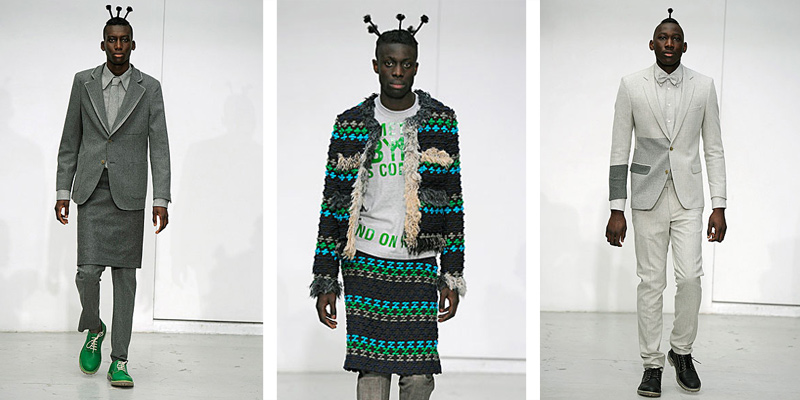 Walter Van Beirendonck
Beirendonck investigated new style options for men’s suits. The culmination of that was a collage of patchwork, suits with coordinating pencil skirts, and a spinoff of the classic Chanel tweed suit. The Africana thread that runs throughout the collection is apparent in the all-African street cast; the palm tree ponytails; the colorful, textural fabrics; and the randomized organization of said fabrics. Beirendonck offers a much-needed break from the more conservative, western clothing associated with the office place. 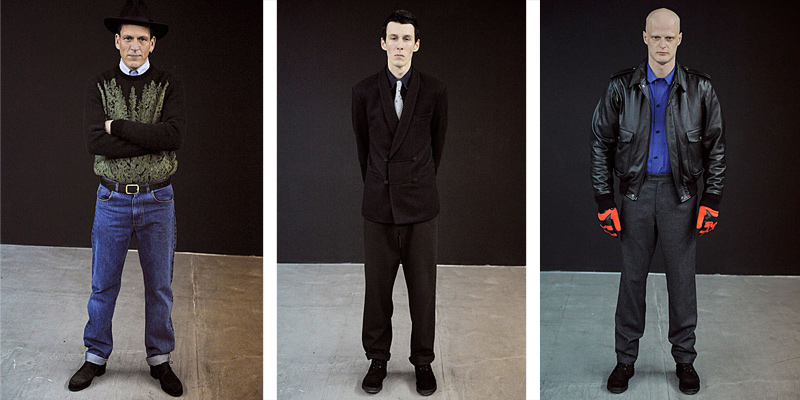 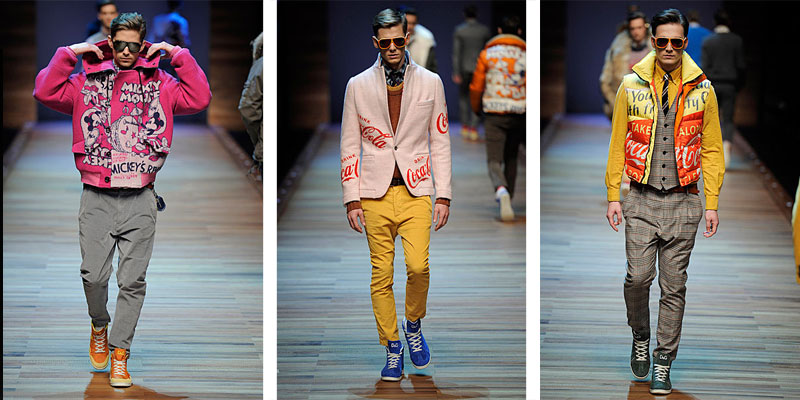 D&G
A Jeff Koons collage superimposed on a Kanye West fashion blog. Abercrombie screen-printed shirts in a faux-vintage style with corporate sponsor printed Coca-Cola logos (Coca-Cola has been enthusiastically tweeting about the line)? The collection was punctuated with the most hideous accessories clogging the Amsterdam metro, neon aviator sunglasses and big Technicolor Urban Outfitters headphones, along with the most generic Delancey Street hi-tops. The use of conventional Disneyana holds a mirror up to the revolutionary screen-printing Vivienne Westwood did in 1969 on Kings Road, featuring the same characters engaging in deviant sexual acts. That was over forty years ago, and this is what we are being served now? It’s corporate, calculated, and desperate. 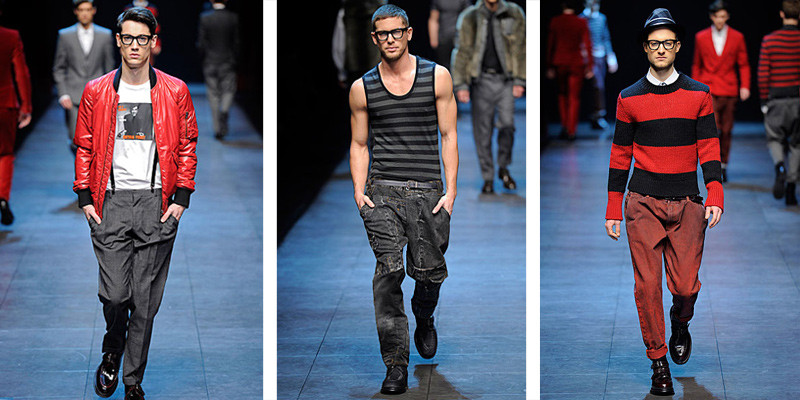 Dolce & Gabbana
It’s offensive on the one hand that Dolce & Gabbana claim this lame re-tread of all their muscle-worshipping, trendy Chelsea Logo Channel A-List Michael Lucas clothing is inspired by Bryan Ferry—as if they’re fans of his music—because we know that all they listen to is Katy Perry. Ferry, Perry… maybe they got their names mixed up and put the CD into the wrong sleeve. But on the other hand, it’s downright insulting that they invited Bryan Ferry to sit front row at this show while they desecrated his image and reduced him to such a Gap shopper. Stripey sweaters and silk boxer shorts? What do those have to do with Roxy Music? We doubt that Roxy Music ever wore tuxedo shirts and jackets with distressed denim, boys. 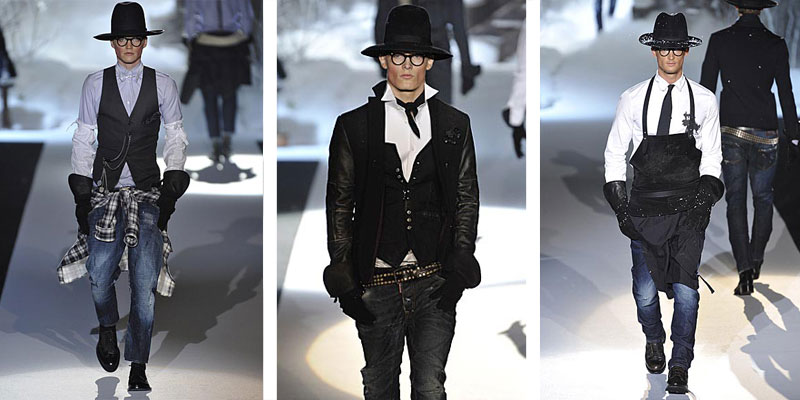 Dsquared²
The whole Dust Bowl era thing is so over it’s astonishing that any menswear designer is even going there. How many Times articles must be written about this trend before it dissipates. And if this utterly boring and pretentious subculture of living in the distant past is here to stay, then let them wear antiques. Do not under any circumstances indulge or encourage this behavior. 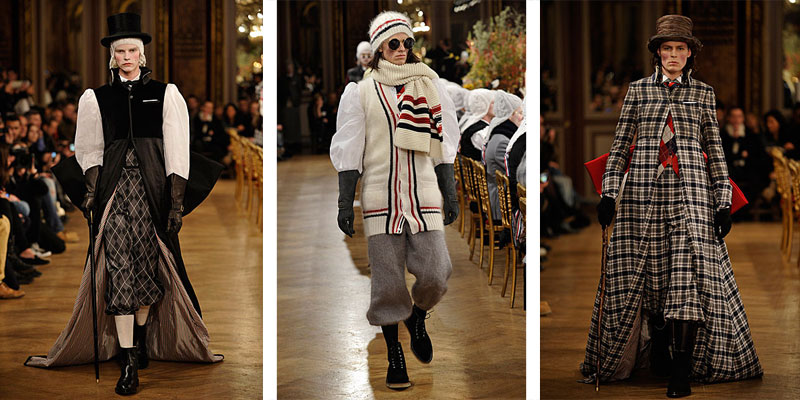 Thom Browne
This is exactly what we hoped would happen to Thom Browne. After seasons of putting out the same retread of his signature short-panted suits, he would react to his lackluster recent reviews by attempting something really grandiose and experimental only to fail and alienate his consumer. Have you ever seen anybody try so hard to create something eccentric in your entire life? Who, in her right mind, would wear any of that? Thom thinks he’s onto some high-concept Rei Kawakubo trip, and unfortunately (slash comically), he’s delusional. 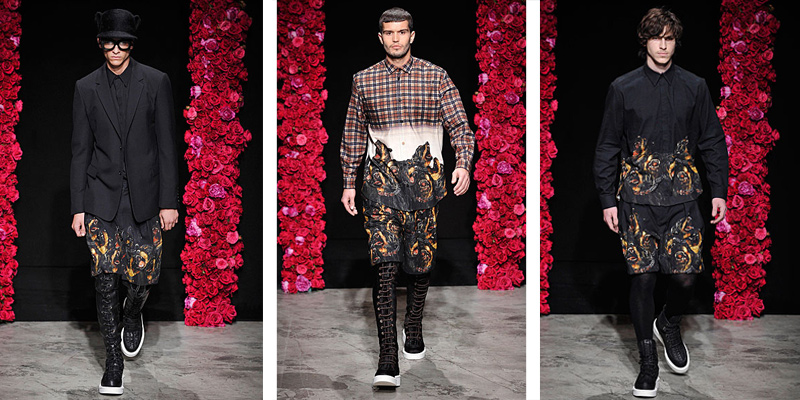 Givenchy
This whole collection was made for Kanye West. That isn’t a theory; it’s actually true. And the furry glasses? EW! The nerd-rap community probably pooed itself over those haute-Urkel novelty frames, sure to be duplicated up and down St. Mark’s imminently. It’s one thing to dress a celebrity, but it’s another thing to blow them up into something so important that you make a whole collection for them like a superfan. Riccardo Tisci has talent for being pop culturally astute and choosing engaging imagery sporadically, and this is really just a lazy throwback to the cholo-bandana collections he’s already done. All he did was add a few Rottweilers. We’re surprised people don’t bore of this more. Maybe he should hire a new menswear designer and fire himself.