The Kanon, a mathematical ruleset for the most harmonious dimensions of the human body, was allegedly created by the artist Polykleitos circa 450 BCE. The exhibition OCEANS BREATHE SALTY, however, did not present us with a single ideal body, but rather a myriad of idealized body archetypes: The Discobolus of Myron, The Bodybuilder, The K-pop band, The Branded Body, The Competition-Certified Bikini Body, and Drake’s Thick Body. The one-day only exhibition explored how our human tendency to worship certain cultural trends and ideals shapes both our individual and collective bodies. Similarities between the renaissance tendency to worship classical ideals of beauty and today’s body-image culture were highlighted. The body was explored as both an object and a bearer of meaning that can investigate the culture and values attached to it’s form – and how that form vacillates between definition and object.

The show was set in the CompleteBody fitness center in Midtown Manhattan. Upon entering the fitness center one was greeted with a recording in the elevator selling us the ten commands of the fitness world before being handed a water bottle that read “Your Body Is Your Temple.”

Light streamed through the high glass windows of the gym onto the audience as the room slowly filled by fog. Deep, pounding music played as the Complete Body performance unfolded, with three bodybuilders walking around the pool in synchronized motions. The three men slowly and steadily traced the periphery of the pool. The swimming pool became a space of reflection, leading the viewer to constantly work (and walk) around the topic at hand, continuously drawn towards the water, but never allowed to enter it. The attraction culminated with the performance of EXP, a real K-pop band assembled as a part of the art project I’m Making A Boy Band by Bora Kim, Karin Kuroda and Samantha Y. Shao. Five men, each embodying a different boy band archetype that set them apart from each other, sang, danced, changed clothes and jumped into the pool as the audience cheered.

Standing there applauding, it seemed the audience had fallen under the spell of fandom. Worship is a strong force that borders on obsession, a theme cleverly touched upon by Amanda Alfieri’s high-strung, food-filled workout and talk. Using her own body and self-image as an object of obsession, Alfieri begged for someone, anyone, to stop her self-destructive behavior towards herself. In the end she found her answer in a Drake quote and in Instagram likes. Hidden ideals were again shown to unconsciously steer us on a daily basis, sometimes to the point of losing control over our lives. Also dealing with branding and social media were the shirts of Heine Kjærgaard Klausen’s Everyone Will Crawl, featuring collages of tattoos, selfies and cut-out prayers such as “TOUCH ME NOW.” Klausen explored the culture of branding by having live models positioned around the pool serving as living clothes racks filled with images of online self-exposure.

Though the bodies in the exhibition were physical, we saw how worship and obsession, be it of ourselves, an object, or another person, pertains to an image of an ideal and not to a physical reality. From silent bodybuilders to a K pop-band, from Lea Guldditte Hestelund’s banners of her toned body striking athletic poses, to Amanda Alfieri’s durational performance and talk, we were presented with bodies deeply immersed in the myths of ideals–be it an ancient greek measurement or social media acknowledgement.

Curator Mette Woller was the woman behind the exhibition. She put her own vision into the event, recreating the mythical baths of our ancestors, merging past, present, male, and female ideals into one arena of worship. I spoke with her about the impetus behind the exhibition and the challenges of curation.

Caroline Ballegaard: When describing the Complete Body piece in the exhibition, you mentioned ‘exhibition design’. Can you elaborate on what you mean by that?

Mette Woller: Complete Body consisted of bodybuilders performing around the swimming pool at the fitness centre by the same name. It was a collaboration between Contemporary Cruising, the design duo Anissa Djeziri & Mette Krebs, and me. The performance existed as an artwork and as a clothing design, and exhibition design project.

The curatorial ideology encompassed the myth of Narcissus and the concept of the White Cube. Like the white gallery space, bodybuilding in popular culture stems from a number of ‘white’ traditions: the ideal of the built, hairless, wealthy, and tanned body carries the signifiers of hard labour and achievement as well as superhuman connotations. The built body presents itself as an ideal rather than a norm. The much criticized white gallery space was invented in the ’30s and was based on the idea of a bodiless viewing subject and on the idea of a neutral space characterized by whiteness. In other words, the ideology of the white cube erases not only the presence of an audience but also the presence of the space itself.

The white cube continues to be the most preferred spatial configuration to exhibit art in; it has become a standardized exhibition format. With Complete Body I intended to raise questions pertaining to the value-laden implications that certain exhibitions, gender roles, and ideals contain. Bodybuilding has for a long time challenged the racial and gender stereotypes once associated with the sport. The white exhibition space has also in many cases expanded it’s former modern ideology with other values. Many find discussions concerning the white cube outdated, as they have dominated the art world since the ’60s. However, I find them more relevant than ever – not so much to as topics of discussion but as impetus to create exhibition alternatives.

As a living exhibition design the bodybuilders functioned as indicators of how an exhibition always expands its physical borders with its pre- and post-production. The bodybuilders operated as mobile exhibition walls and fluid backgrounds in constant movement. The bodybuilders’ hyper visibility and diverse skin colour were meant to challenge the problematic “neutral” values implied in white walls.

CB: How did you envision the experience of the exhibition? Is there a certain atmosphere you wanted to create?

MW: What is unique about being present in an exhibition is that you can never plan or recreate that experience. However, I had a vision of the gestures the space could potentially articulate, which was a combination of different elements: it was important to me that the exhibition took place outside of the art institution to avoid the values applied there.

It was the intention for the exhibition to merge with the everyday life of the gym and the people coming and going, which means that the fitness centre was open as usual throughout the entire event. This was to involve both the gym location and its fitness members. The exhibition operated both as a parasite and as an integrated part of the fitness centre. The intention was to create a narrative that activated the entire space from the entrance in the elevator to the swimming pool area, where the rest of the artworks were. 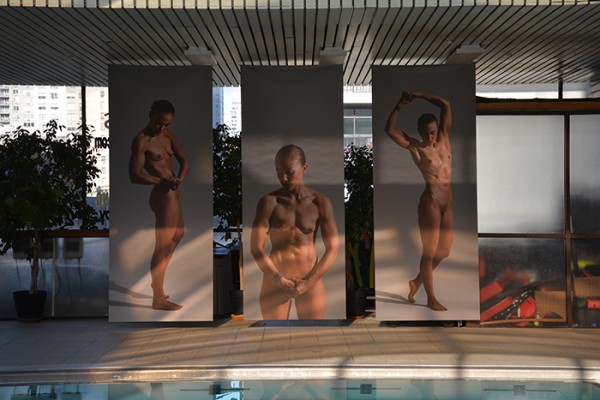 I wanted to exhibit near a swimming pool in order to activate my curatorial concept based on the Narcissus myth, and Boticelli’s The Birth of Venus. The smoking machine, the light, music, and the contact lenses that the bodybuilders wore in the work of Contemporary Cruising were all an integral part of their interest in entertaining and creating a special experience. At the same time the exhibition experimented with the audience’s presence by making them aware of themselves watching and being watched by all the video and camera women and men that had the priority “seats” at the exhibition, making sure that the exhibition could live a life after.

CB: Physicality was a crucial aspect to the whole exhibition. What are your thoughts on the body in contemporary art? Is it overlooked/overexposed?

MW: I would not say that the body is overlooked in art, especially not for the last few years where performance practices have been in the limelight. However, it seems as if there is a resistance within some art institutions to be associated with the fact that a part of performance art evolved out of practices where artists pulled things out of their vagina. I find the performances of the ‘60s extremely important and interesting in relation to how artists work with the body today. That being said, hopefully the amount of flesh and bodily exposure in OCEANS BREATHE SALTY directed people’s attention in other directions than just pure physicality.

Amanda Alfieri, Little in the middle but she got much back. Photo: Søren Aagaard.

CB: How do you envision your role in the creation of an exhibition?

MW: In the last few years, curating has become synonymous with selecting and organizing in any capacity. With music festivals, websites, and even YouTube playlists, repeated and quotidian curator quickies seem to empty the meaning of the practice. When repetition occurs it can either take on new forms while it repeats itself or it can be reduced to a simpler form that you stop paying attention to. The overuse of the word “curator” made me interested in finding a new term that could replace it as a definition of what I am. I am interested in curating as an action and a Gestus in the Brechtian sense. That means that the exhibition designs I develop carry social, political, and economic comments. Unlike Brecht I see a great potential in emotional effect. In other words, what interests me is not what I am, but what the things I do can activate. I see my role as creating a potential space for reflection with conscious gestures that persistently activate the space and its co-players.

CB: It seemed to me that you tried to challenge the typically rigid roles of artwork, artist and curator within the exhibition. Would you agree and if so can you elaborate?

MW:I work in very close dialogue with the artists and contributors I present, and the way the narrative and the intended atmosphere of the exhibition were built up is a result of how integral the artists and contributors are to my concepts. Every detail in the exhibition (the contributions, the installation, the communication) happens as a collaboration in the sense that we consult each other on the matter.

OCEANS BREATHE SALTY is inspired by the event Articulate Muscle: The Male Body in Art, at The Whitney Museum in 1976, where Arnold Schwarzenegger and the two other Mr. Universe types, Frank Zane and Ed Corney were exhibited as living objects of art. Whilst being a sport, bodybuilding operates with aesthetic terminologies that describe the body as an art medium that is capable of being sculpturally formed, like clay. The ideals and hearth of bodybuilding are inspired by ancient Greek and Roman art. In that sense bodybuilding holds parallels with artists living inside their own creations, and challenges the idea of sculptural mediums. It is not definitions as such I find interesting, but how they serve as active comments on what definitions are. For instance, the de-functional design of the duo Anissa Djeziri & Mette Krebs articulated the tension between skin, body, and functional flexing through their clothes made to expose body structures and muscle. The clothing design became an ambivalent structure trying to simultaneously show and hide itself.

I think the negative connotations related to the curator as an artist versus the positive connotations related to the artist as a curator have dominated the art world for a long time.Curating is a multiple-layered practice based on very diverse ideals and actions. For me it is problematic when curators do not actively work with the space in which they exhibit art. I am not interested in being an artist, the interesting point of departure for me lies in the curatorial field, in order to constantly reposition the possibilities of art.