Hundreds of people stuck in a giant swimming pool passively floating to the rhythm of artificial waves. The poor resolution of the found footage muddles them into a contextless and faceless crowd. Nobody tries to escape the crowd, or go against the current. They are trapped but happy enough. It’s like Dante’s Inferno but without the drama. Just the people floating in the mud.

The final scene of Mainsqueeze captures “a contemporary atmosphere or mood” which sets the present as a time out of joint, encapsulated by the washing machine that tears itself apart over the course of the film. Rafman poses the present escape from the real towards the simulated as the result of a general feeling of turmoil that leads to flight rather than revolt. In the video, the first readable line of text is written on the forehead of a sleeping drunk man at the beginning of the film: “LOSER”. He smiles, and we are led to wonder who the loser really is.

Yet Rafman is not making a particular ethical statement: “Mainsqueeze expresses a moral condition or atmosphere without making a moral judgment. I gravitate towards communities like 4chan because I see in them a compelling mix of attraction and repulsion. This ambivalence is reflected in the current cultural moment.”

Surfing the deep web, Rafman collects, orders, observes, and makes his source material visible to us: “Mainsqueeze is entirely composed of footage found through my online explorations. The voice over text is a combination of modified quotes from literature, Tumblr, and comments on various message boards. I feel less of a need to create original material from scratch due to the sheer abundance of material out in the world to work with. The craft is found in the searching, selecting or curating, and editing together of the materials pulled from far-flung corners of the web.” Yet, he insists “it is not about fetish tourism or shocking people about what exists in the dark corners of the net, rather, I am giving the sourced material a poetic treatment.”

Rafman assumes, and in turn invites us to assume, a difficult position: he is simultaneously the drunk man, the one who paints his face and the one passerby who thinks they are both stoned. Sometimes he himself indulges in degradation, and we as viewers are equally implicated.

An original use of voice-over contributes to this sense of viewer involvement. It is used neither to generate empathy nor to signify a complete alterity (as when synthesized voices are used). Rafman explains that “This particular tone came about through experimenting with a montage of a wide range of material; moments of philosophical epiphany, pseudo-intellectual quotes from tumblr, banal confessional message boards, comments from reddit threads, etc.” In Mainsqueeze, this montage is turned into a profound yet familiar voice that often addresses the viewer directly, dragging you into the world depicted on screen. Let yourself in. 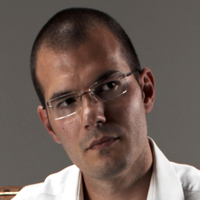