a screenplay by Geir Haraldseth

A young woman is lying naked in bed. Her body is exposed to the cold light coming in from a low window next to the bed. An alarm sounds from nowhere and the young woman swats the alarm. She does not hit anything except for the bed. The alarm stops.

The young woman opens one eye and looks straight into the camera. Her eye is clear and awake. The camera slowly zooms into her eye as the narration begins.

Narrator (V.O.)
When a work of art wakes up in the morning, she might not take a shower or put on make-up. She doesn’t really care. She don’t smell. But, she always wears an illusion. This particular illusion was made popular by writers and thinkers such as Adorno, Horkheimer, Bourdieu, Benjamin and other men who are now dead. The illusion is the scent of potential. She has the potential to be different, to be somebody else, to represent something else. More than a piece of work. She’s a work of art. When she slides the illusion over her naked body, she feels powerful, like she`s worth something. Something more.
She could be an abstract expressionist painting, she could be an untitled performance piece, she could be a sculpture of a woman with a shirt and sunglasses, she could be.

The camera zooms out from the eye to the naked body. The woman has been replaced with another actress of the same age and likeness. The young woman gets out of bed, stands up, walks over to a closet and picks out a hanger. The hanger has no real clothes on it, but the young woman pretends to put on a slip. She does this without hesitation and without checking any details. She walks to the door and steps out straight on to the busy street of a big city. The young woman walks among the other people and has a runway walk, distinct from the other people on the street. No one notices anything different about her though. The narration continues as the camera follows the woman walking down the busy street.

Narrator (V.O.)
When the work of art walks out the door, she is on display. She represents. She is looked at. She doesn’t care about the gaze. All she wants is to provide a difference. This difference is not gendered. She doesn’t care about gender. All she wants is to be something else.
She smells like commerce, but looks like she’s not. She might be sold, but she feigns disinterest. She’s not in it for the money. She’s not a whore.

The penthouse is Sleek and expensive. The young woman has been replaced by another actress. Similar in appearance. The young woman is sitting down in a black leather seat and stares intently into the camera as the narrator continues. The camera stays static.

The camera pans across details of the gallery. The entry way, the desk, the walls, the floor, without focusing on a work of art. The narrator speaks as the camera pans slowly across the interior.

Narrator (V.O.)
The art market is the second largest non-regulated market after the drug market. There’s a lot of money to be made, there is no denying that. The way that a work of art accrues value has been described as a disinterest in money, along the lines of “I’m not in it for the money,” “I just need to make this.” The money is alpha and omega, but a childish negation is part of the boho dance. There is also talk of avant-gardes, of transgressive practices, resistance to the market, challenging, institutional critiquing, discoursing, and any -ing’ing you can think about. It all is marketed and sold, true to brand. Use your illusion. Don’t ever take it off.

The camera focuses on the young woman in the gallery space. She has yet again been replaced by another similar actress and is still naked. She proceeds to take of her imaginary slip and tosses it to the ground and stands on top of it. The camera pans over her body as the narrator continues.

Narrator (V.O.)
The illusion discarded before you is a fable, but fables tell us about our world and can help us to understand the way in which we work. And the way in which an art work works.
This is the artist.
This is the work of art.
This is a middle man.
This is a receiver.
Sounds like a game. And it is. As we find in sociological studies of the art world, there are certain rules and players are only allowed certain moves. What’s your move?

INT. EMPTY ROOM WITH NO WINDOWS.

All the actresses who have portrayed the work of art as a young woman are standing clothed with products from the DISOWN project in an empty room. The room is akin to a storage room and is dimly lit. The camera only shoots the women in a group, never a one woman on her own.

Narrator (V.O.)
The work of art is unique.
The work of art is mechanically reproducible.
Whatever.
Subversion is part of the game in the art world.
Illusorily subversive.
Just another illusion that rather acts as fuel to spark interest and trust. Let us embrace the market and overflow it with copies. Cheaper. To the masses. Let everyone have that fucking sculpture by Lizzie Fitch. Who cares if its a retail structure for shelling shit. That sculpture by Amalia Ulman is rad. Wear it like underwear. This performance by Khole is based on that work by Yvonne Rainer. You can’t buy it. Its in the bag. Let me have that Ryan Trecartin video. Even if it is a sweatshirt. Did you see that sculpture by Dan Keller? Its epic. Its not a fucking baseball cap.
Let me wear dis illusion. 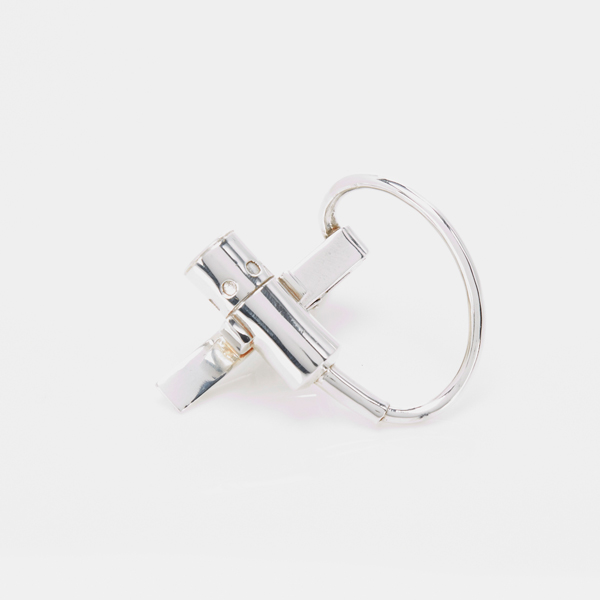 Geir Haraldseth is a curator and a critic based in Stavanger, Norway. Haraldseth holds a BA in Fine Arts from Central Saint Martin’s College of Art and Design and an MA in Curatorial Studies from Bard College. He is currently director of Rogaland Contemporary Art Center and previous positions include curator at the National Museum of Art, Design and Architecture, Oslo and at the Academy of Fine Arts in Oslo. Haraldseth has contributed to several journals and magazines including the Exhibitionist, Kunstkritikk, Acne Paper, and Landings Journal. He recently published «Great! I’ve written something stupid» featuring a selection of his curated projects and writings, published by Torpedo Press.