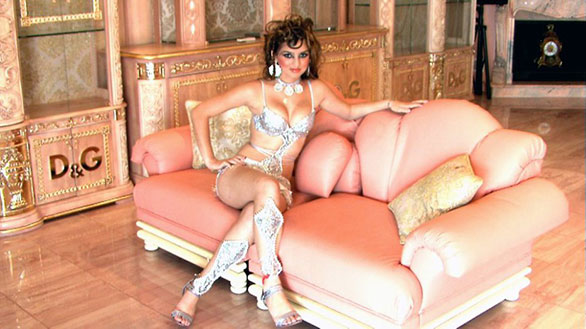 Romani is a mashup culture. With origins in either northern India or Egypt, the Romani people live in nearly all parts of Europe, North Africa, and some of the Arab world. Fittingly, they go by many names: in the Iberian peninsula, the Romani are known as the gitano, or simply Gypsies. Everywhere Gypsies have gone, they have hybridized with local culture producing synthesized genres of fashion, music, and dance. Emerging from the culture-blur is a new figure of distinct character and style: the xula gitana bride of Spain.

They and their families dress in hyperbolic wedding fashion to broadcast and amplify the significance of the event. Unlike traditional American weddings—which are dominated by the highly-styled, pop-cultural spawn of the Queen Victoria’s iconic 19th century white dress—boda gitana visual culture draws from a wildly varied, rich, migrational heritage.

Boda couture ranges from DIY, bedazzled, lycra one-pieces to excruciatingly-crafted, rhinestone-encrusted showpieces, all of which consistently maintain a shiny-equals-expensive maxim. Gitana jewelry has always been like a bank account. Heavy gold pieces mixed with rhinestone-studded tortoise shell brooches and Christmas tinsel are both standardized uniform and capital for future rainy days.

Sparkly Hindi-chandelier-like costumes are still something of a new trend, and the expanding gitano middle class in Andalusia and Catalonia are reinventing traditional wedding ceremonies into decadent Bollywood-worthy productions. The new generation of actively modernizing gitana are known as marica and xula-gitana. Like chalga-chola showgirls at Carnival, these Iberian divas compete with ganguro girls for most-constructed-face. Cindy Sherman could have a second career in Andalusia. Orlan’s iridescent satyr-nub implants look subtle. Christina Aguilera circa Moulin Rouge seems copy-paste. Did Elizabeth Taylor’s Cleopatra birth a litter of Ottoman-marica doppelgängers? The references are almost too rich to fully unpack.

Parallel to the visual mashup of boda fashion, the music and dance of the gitana become a foggy Iberian blend including but not limited to salsa, flamenco, and kuchek bellydance beats. Much like the various genres of pop-folk and turbo-folk in the Balkans, the better-known flamenco is a distinctly Romani product and has been described as a “cry of pain” from hundreds of years gypsy oppression. Rumba gitana, flamenco gitano, and a hybrid salsa-kuchek bellydance are common during the multi-day pre-boda party and the wedding itself. Xula gitanas take turns dancing center-circle, their body glitter and golden faces shimmering as they gyrate.

The xula gitana bride visually lives side-by-side with the modern pop-princess and capitalist-starlet. Spectacle-bride Kim Kardashian’s fire-bombing of the media landscape with images of her lavish ceremony; Kate Moss’s excruciatingly long, multi-dress Vogue story shot by Mario Testino: these are clearly hyper-xula-boda affairs. In both instances the brides are broadcasting a fantastic image of wealth, prosperity, and vitality. Gitana bridal style is an articulation of a complex heritage colliding with these same intense image flows. Their images are glued, painted, sewn—practically welded—together and projected out to their community, and now on the internet, where these images begin to circulate globally, intersecting with new contexts and audiences. It seems a fitting development that a culture based upon migration, adaptation, and remix in the physical world is now aggressively participating in a virtual exchange of image and ideas.