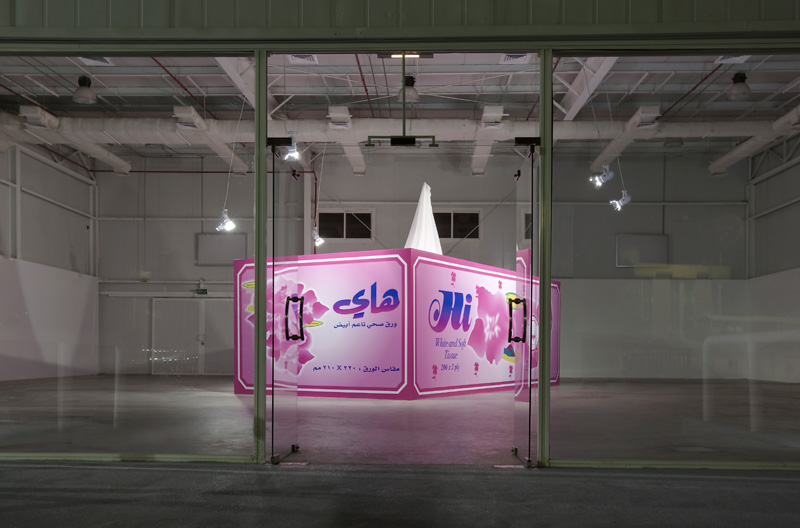 The Arab Fund for Art and Culture (AFAC) grant-winning project presents the tissue box as an unlikely Kuwaiti national icon. The two-part installation consists of a film projected inside a monumental tissue box–created in collaboration with Kuwait-based designers Aziz Alqatami and Nanu Al-Hamad. In this project the artists investigate the notion of “gendered space,” by uncovering the role, context, design and discourse present in the Kuwaiti ritual/space of Chai Dhaha. Chai Dhaha is the ritual of pre-noon tea amongst middle-aged Kuwaiti women–an informal female forum that exists parallel to the Diwaniya (the male forum).

The film, shot in Kuwait at a hotel ballroom, features four middle-aged female characters played by a cast of younger men. Al Qadiri and al Gharaballi pay homage to Abdul-Aziz Al Nimish, the legendary actor who for decades performed the roles of mature women when it was viewed as unseemly for women of that age group to perform in public.

Chai Dhaha, as opposed to the Diwaniya, remains a largely undocumented phenomenon. The results of Googling the words “Chai Dhaha” (in English or Arabic) are negligible, not garnering an image, video, or a single definitive text. In the vein of Al Qadiri and al Gharaballi’s previous work, which examines and explores equally undocumented local lifestyles in the global media age, the project follows the artists’ interest in re-enacting private social scenes through fantasy-based performance. 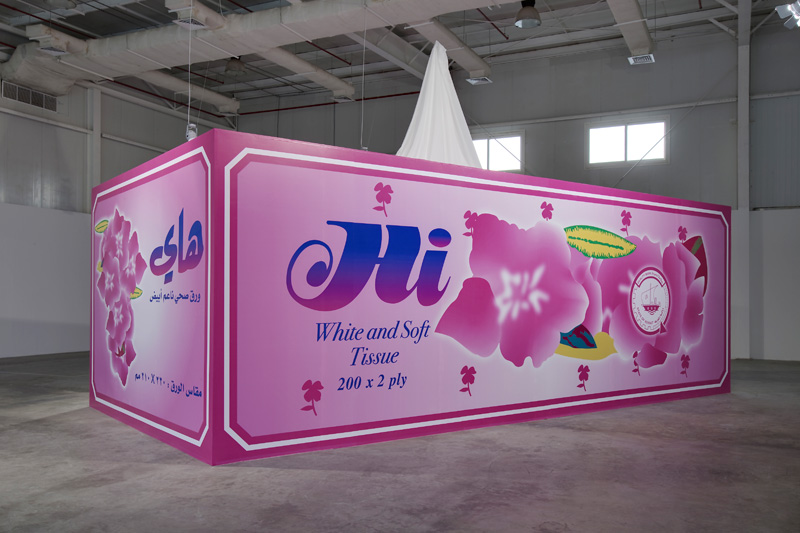 The film is set out-of-context, in a ballroom as opposed to a residential living room, to illustrate the absurd spatial conditions of post-oil boom Kuwaiti interior aesthetics–where designing to human scale took a backseat to supersized ostentation. This is not to be confused with the documentation of the imagined or fantasized ritual, which is not satirized. The satirical play on a proportionally challenged space primarily comprises a formulaic arrangement of key objects (e.g., a Kleenex box, seating lining the circumference of the room despite the distance, et cetera). The Kleenex box especially–as ubiquitous as it is in every Kuwaiti home–is placed in the center of the hall, highlighting the proportional absurdity of the scene, forcing the characters to “perform” by walking a long distance to get a tissue. But beyond satirizing the use of space, the film attempts to document a marginal ritual without making the exercise a journalistic one.

The ritual commences with the characters engaged in a non-linear stream of formalities. In Kuwaiti social interactions, both men and women greet each other in a ritualistic manner, whereby they address one other using an excessive number of prescribed, often poetic and context-based sayings. These excess formalities engender a rigid air of decorum, disabling a sense of familiarity one would expect at a gathering of friends and family. The naming of generic medicine (a preoccupation of mature women in particular) refers to the post-oil obsession with hygienic products—wet wipes, disinfectants, tissue, hand sanitizers, et cetera. It also relates to a sanitized, generic aesthetic preferred in the Gulf. This reactionary behavior is an attempt to control the organic chaos of the original, pre-oil environment. This behavior has become more pronounced with the increased variety of hygienic products, in line with consumerist tendencies. 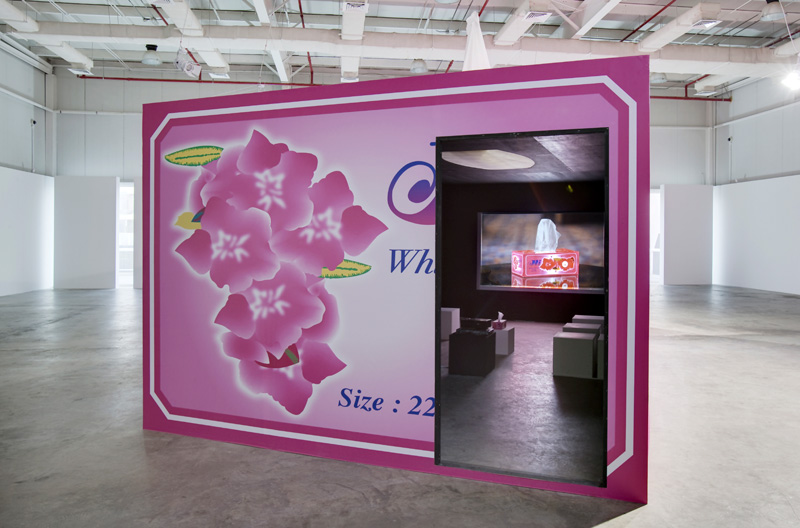 The second part of the project is the installation itself, consisting of a large scale Kleenex box where the film is screened. Continuing the theme of proportional comedy, the Kleenex box, aside from being a replica of an actual object in the film, serves as a dislocated physical artifact. Forcing the viewer to enter the bowels of the Kleenex box to view the film continues the object’s role in the film, which is one of performance instigator and voyeur/witness. This scale shift is an attempt to monumentalize the object, thereby cementing the status of this unlikely national icon.

“Chai Dhaha and Kuwait’s obsession with tissue–while these subjects appear to be disparate, we feel that they are integral to Kuwait’s modern post-oil history and aesthetics but have been left unaddressed in contemporary national discourse,” state Al Qadiri and al Gharaballi.

Mendeel Um A7mad (N x I x S x M) was originally exhibited at Contemporary Arts Platform Kuwait, from the 26th of January to the 9th of February 2012.