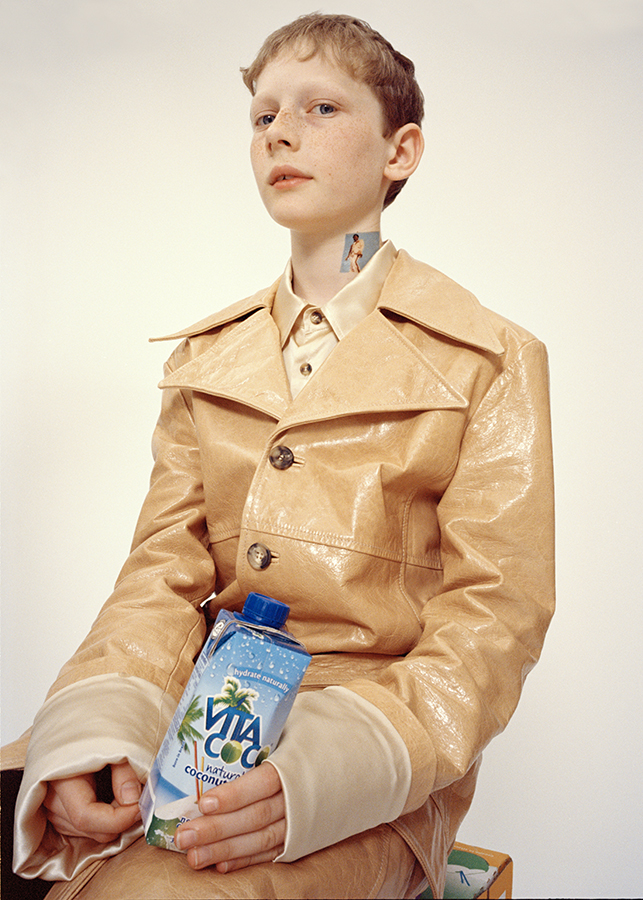 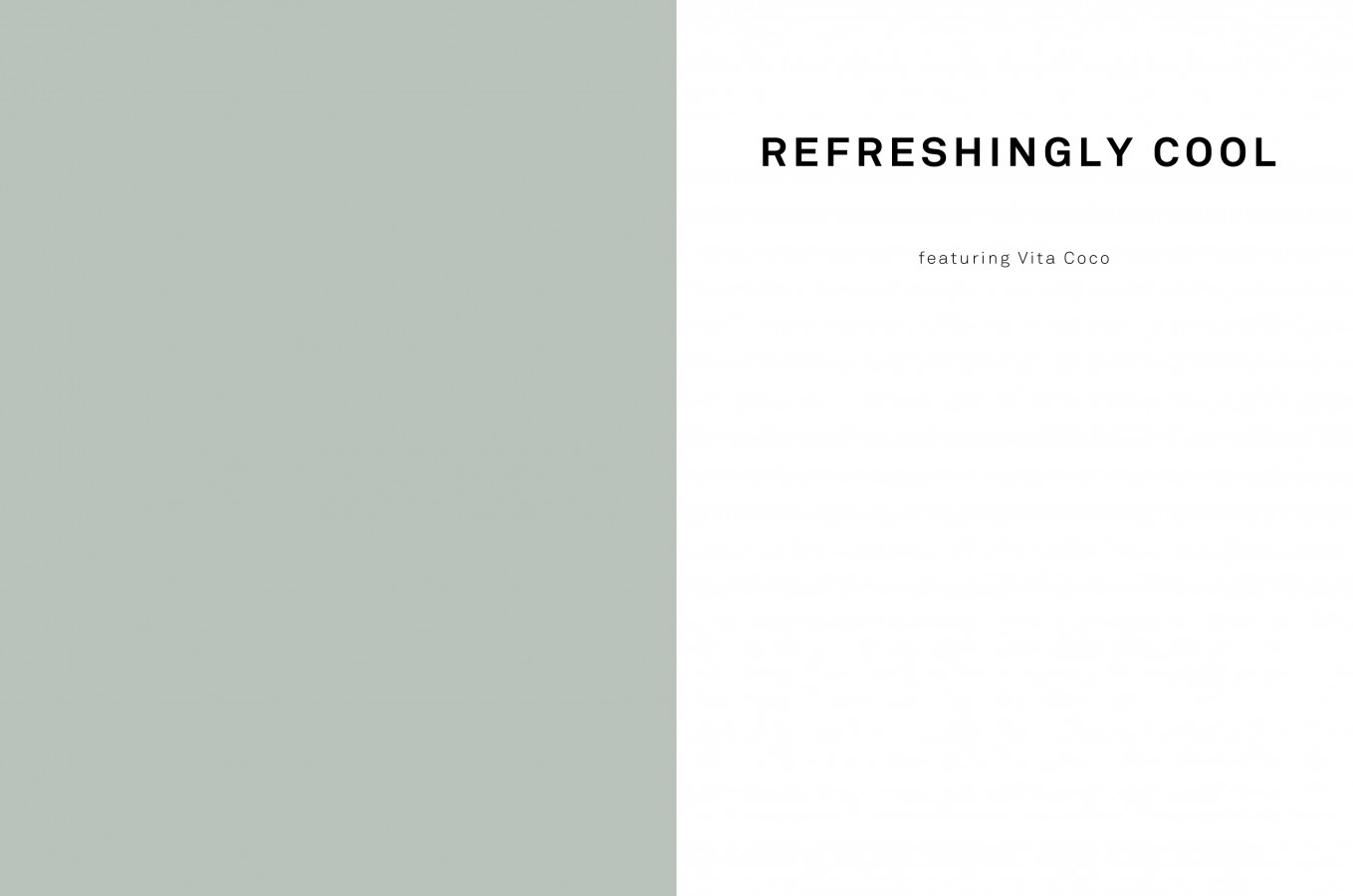 “It’s all a bit crazy at the moment,” twenty-three year old Grace Wales Bonner says over Skype from her native London. “I really didn’t think this would happen.”

By this, she means being awarded the L’Oréal Professional Designer of the year, outshining 39 other finalists who showcased their collections at the Central Saint Martins’ graduate fashion show. In her first fully realized menswear collection, lavish costume jewelry topped off high waisted flares, cropped mohair jackets, ruched bandeau tops, and tailored denim, referencing a flamboyant style of self-expression in 1970’s Nigeria. Notable for its smart styling and cast of West African boys, many of whom are her friends, Wales Bonner presents a strong vision rooted in research, yet clever enough to be distinctly her own. DIS caught up with Grace amidst the post-grad excitement to talk casting, working with Vita Coco, and plans for a promising, rosey pink future.

Grace Wales Bonner: Me and my friends have this look—nuns are kind of the vibe. I don’t like to show my body and stuff, really. I don’t want to be sexual in the way I dress. My summer look is basically dressing like Jesus—sandals, wide layers, a center parting.

AS: Your thesis collection is a hybrid of African opulence contrasted against western ideas of luxury. What were your references?

GWB: I wrote a 10,000-word dissertation this year on the turning point in black expression around the late ‘60s, early ‘70s. This idea of taking ownership of your representation, working inside established frames of reference to create something new. It was about real people taking out cameras and turning them on themselves and being like, ‘this is me, this is what Africa is—it’s not what you want Africa to be.’

Samuel Fosso is a massive inspiration and was a big starting point because he was a photographer in Lagos in the ‘70s. He had a photo studio and at the end of every roll of film, he’d take a photo of himself in his own clothes—he had such incredible style–and send these photos to his mum. It was this idea of not being a document, but being the person that’s creating the image; confusing people and having layers and not fitting into people’s ideas of things. It’s actually an intellectual idea more than anything. That translates into lots of things like blaxploitation films, where people are happy to be oversexualized and men can be more feminine and flamboyant. These ideas of what a black person is or was, people out-performing those ideas and taking ownership of them and changing them and confusing people. It’s about that. 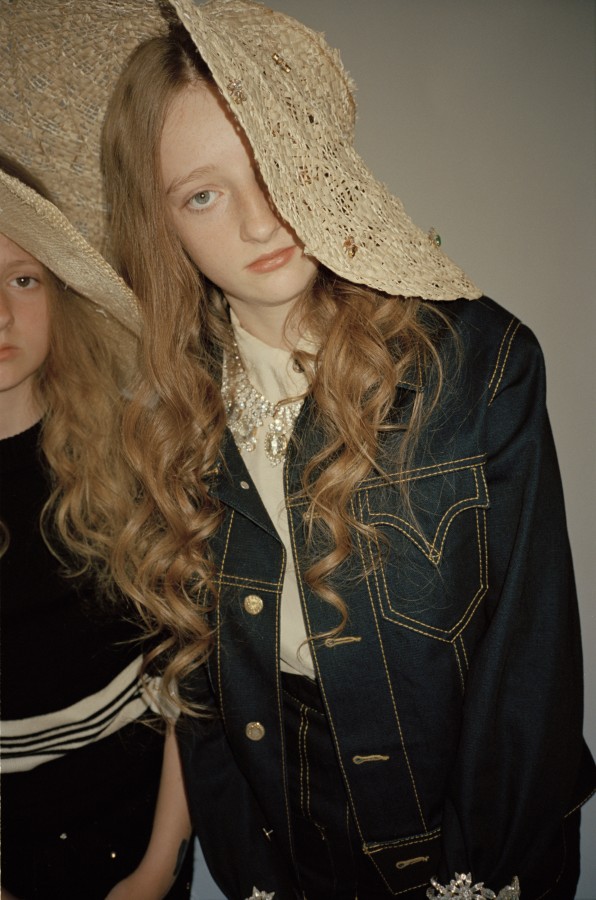 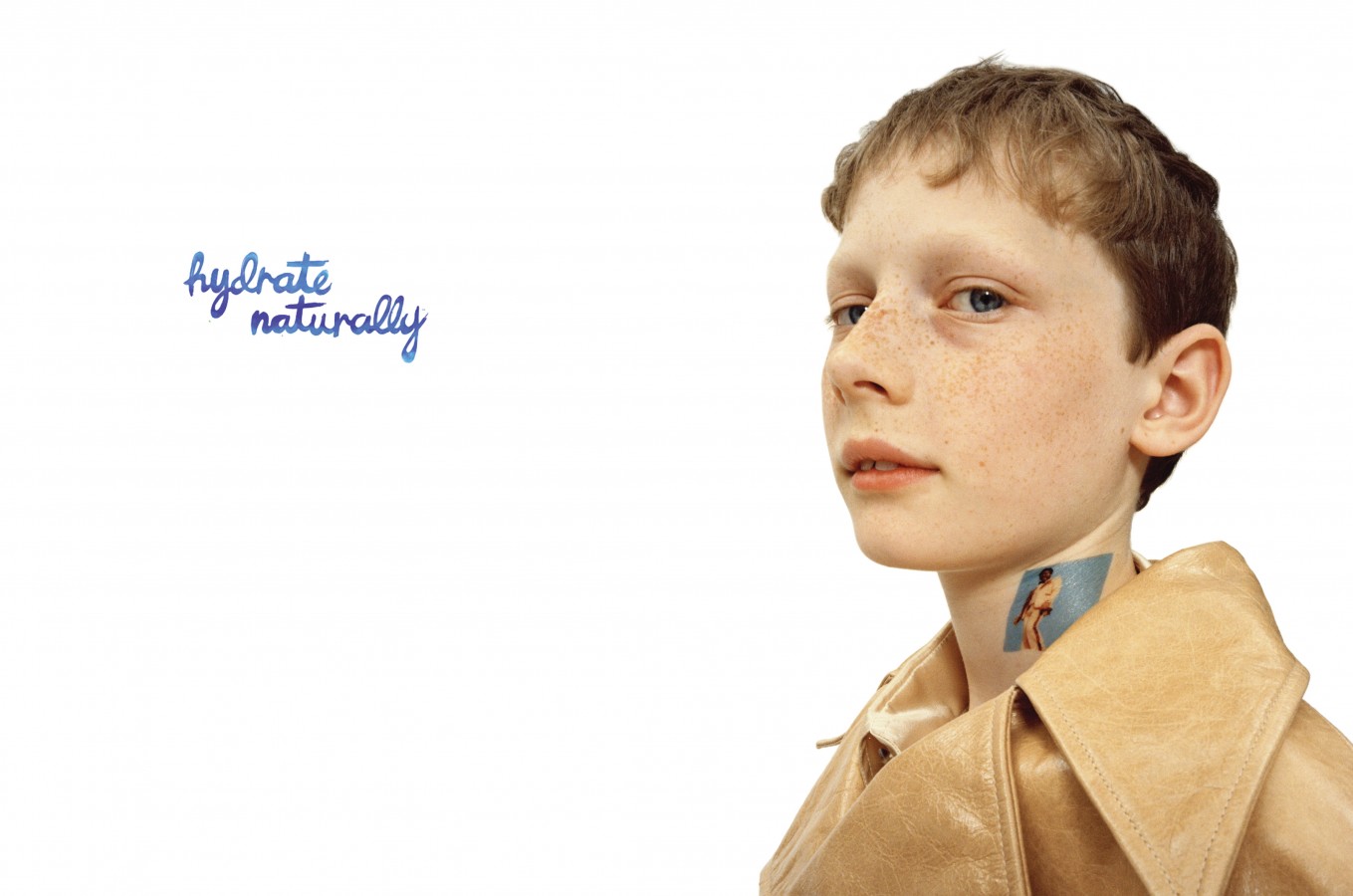 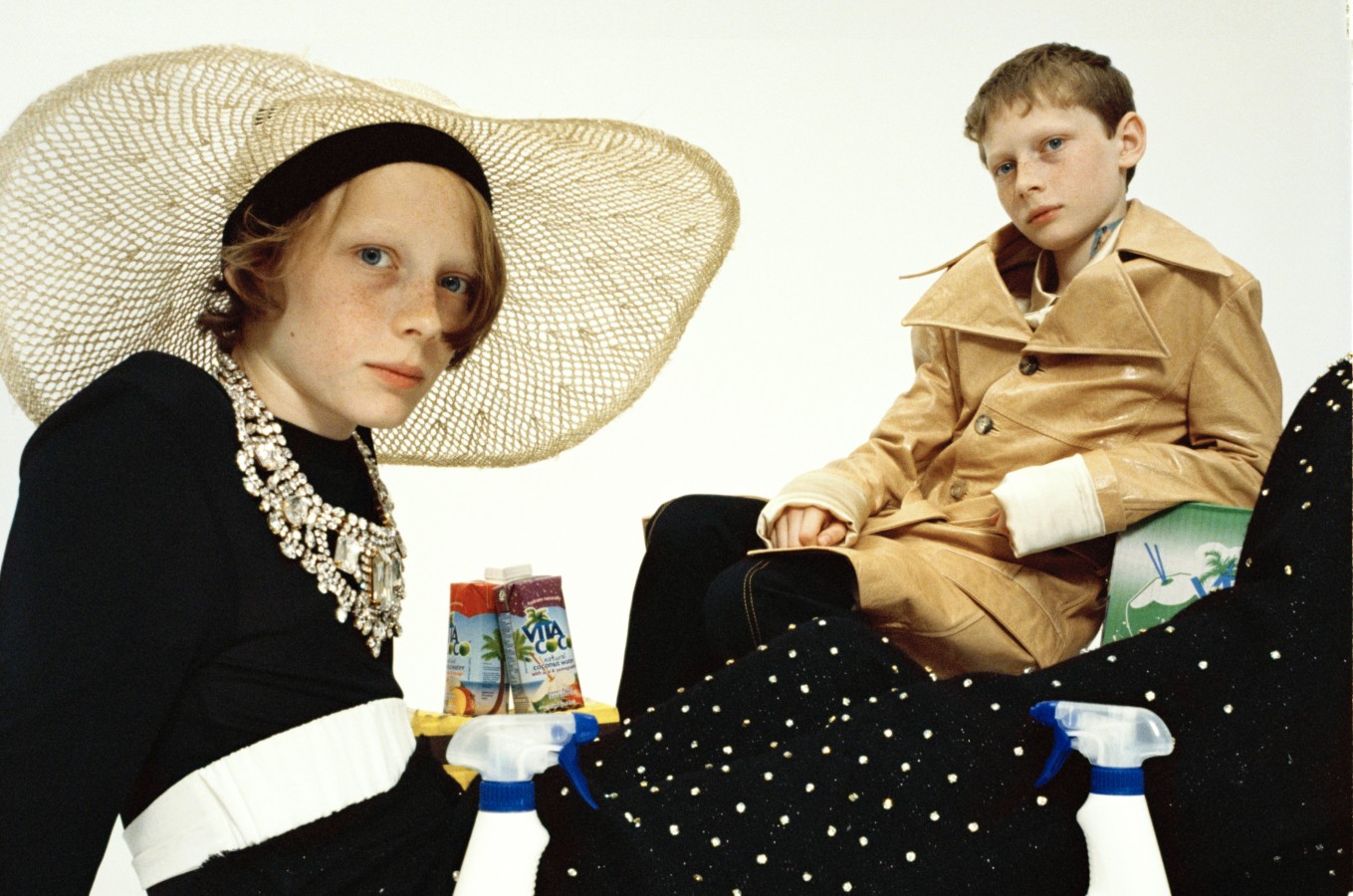 AS: I can see how that was reflected in the casting.

GWB: Yeah, literally from the start I was like, ‘I want these models.’ I knew I needed to have people who look distinctly West African. Quite a few of them are my good friends.

I wasn’t trying to be political or address racism either; it was more about my research. I was looking at these boys in Africa in the ‘70s and they’re all dark and the whole thing was about performance and blackness. If I was looking at Basquiat and Kerry James Marshall, they paint their figures pitch black. They’re very unapologetic about how they present blackness. I wanted it to be very direct and no middle ground about what it was. I feel like a few designers recently are doing black shows and I don’t think it should be a ‘thing.’ People should not even think about making a statement. It’s normal to have an all-white show, so why is it not normal to have an all-black show?

These boys were my muses from the start. I had them working with me in a way; I was trying stuff on them and asking them, ‘would you actually wear this? Is this ridiculous?’ Seeing their reactions made it easier for me. I wanted it to be real and something they’d actually wear so I was quite conscious of them.

AS: It’s clear you’re ahead of the curve. Do you see menswear evolving?

GWB: I’ve been looking at shows and I think there’s starting to be a lot more emotional and progressive menswear. Fashion seems to be where most daring ideas about identity start to translate and then be interpreted into more mainstream ideas, so I think it’s really good that people are challenging ideas about what a man can be and look like. Men are more of a blank canvas in that sense; I don’t find men so threatening. It’s kind of a trend now—the gender thing in fashion—which is all good, I think. If people are saying it’s fine for men to be sexual in a different way, that’s good because it will trickle down to people’s general ideas about men and sexuality.

AS:What other designers are hitting the mark?

GWB: Gosha. The show in Paris, the casting was incredible. His references are so specific and personal. I saw an article saying he’s covering things that the fashion world hasn’t really covered before, so when you get those completely new ideas, especially in his Soviet influences, that’s just not something that people think of in terms of fashion. I think it’s really cool for those images to be out there. He’s a photographer as well, so all his stuff is really personal in terms of research. It’s all just like, skaters he hangs out with in Russia and stuff. He’s very driven by a boy, a real person. 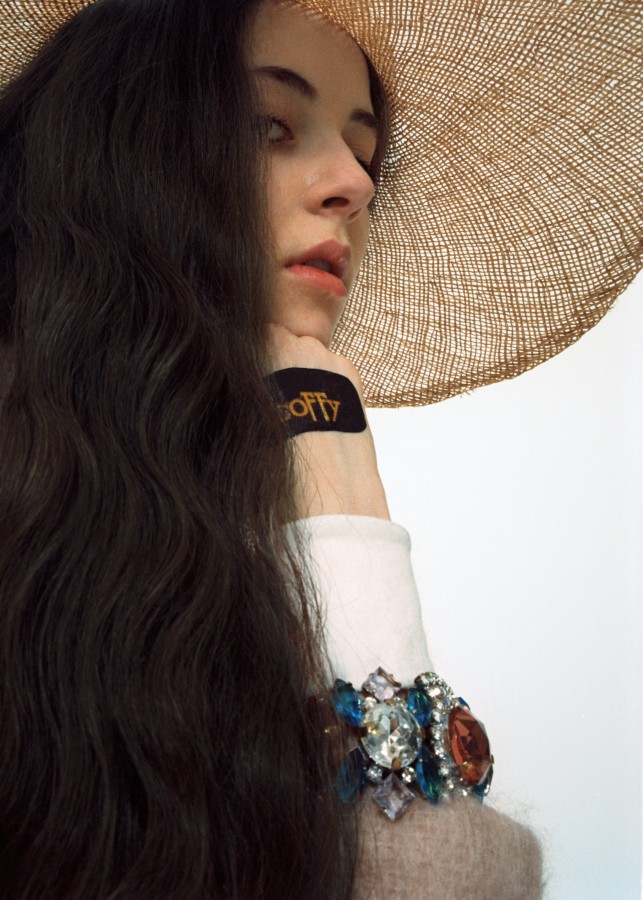 AS: We’ve been wondering, did you actually work with Vita Coco?

GWB: The whole time I was designing the collection, I was thinking about brands that would kind of relate to what I was doing. So Vita Coco, just because of that tropical-cool thing, were quite related. I was reaching out to sponsors the whole way through trying to get money for the collection, so lots of my fabrics, jewelry, shoes—loads of things were sponsored. That’s how I funded it as well. I got in touch with Vita Coco to see if they could help me, and then later on they were able to help a bit more. At the start they just sent loads of products, but then it was a trial to see if we could work with them, basically.

AS: What does the future look like for Grace Wales Bonner?

GWB: I’m going to Senegal in September for a month to do a new project. I haven’t completely worked it out but feel quite urgent about going. Have you seen that pink lake they have there?

GWB: Yeah, I really want to go, it’d be amazing to shoot something there. I’ll probably just try and collect as much imagery as I can. A research project, really. I’m trying to establish a creative agency that collaborates with brands to create new fashion imagery. I’m finding the right people that want to work with me and share a connection. I’ll probably go back to design at some point, but don’t want to go via the straightforward route. 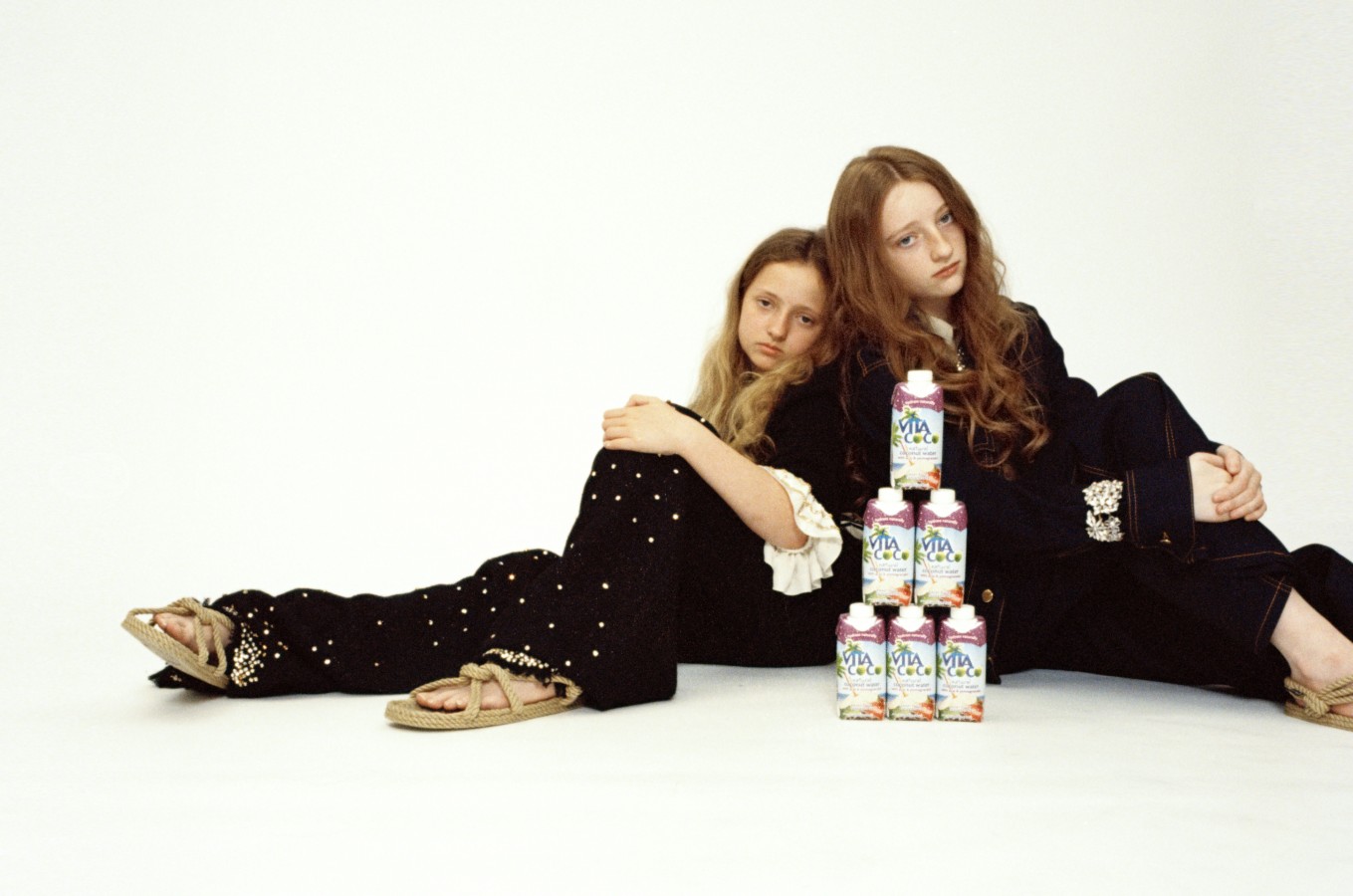 With Thanks to Vita Coco, all the kids and their parents. Julie Wales, Shirley Chan, Harry Gibbs, James Gregory–Campeau, Maria Tasula and Olya Kuryschuk 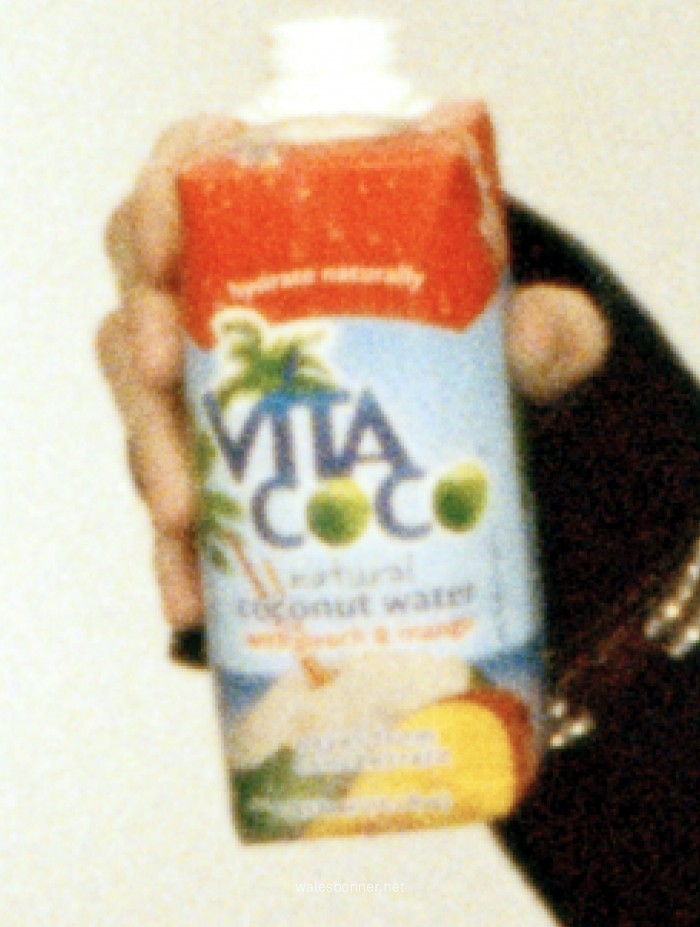