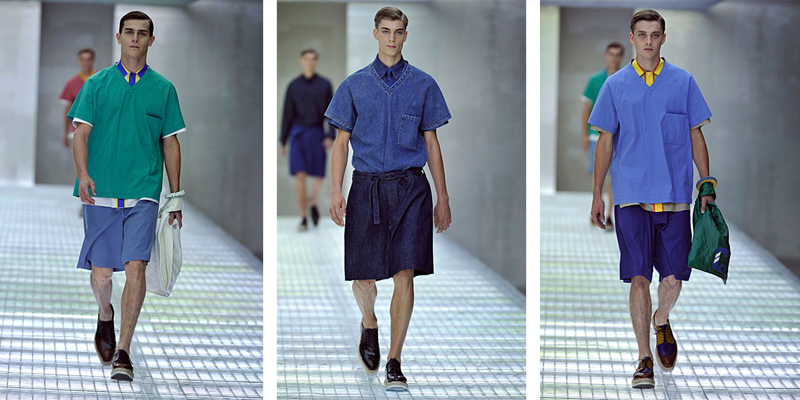 Prada
Miuccia stole our obsession with inter-hospital uniform hierarchy in this season’s refined rendition of scrubs and, as a whole, the wardrobe of a hot doctor. Hopefully Doctor Mancini’s wardrobe will be replete with Prada on the next season of Melrose Place. Among this season’s Prada inventions: the drawstring fannypack, the wingtip-espadrille sneaker, and Oakley-esque shades adorned as an athletic, modern choker. Her denim scrub shirt was ripped straight from the pages of our spring trends, and used as a double-layer, it comes across as both incisive and equipped for incision. Baggy denim shorts are now de rigeur for DILFs. A divine intervention. Deus ex Prada? 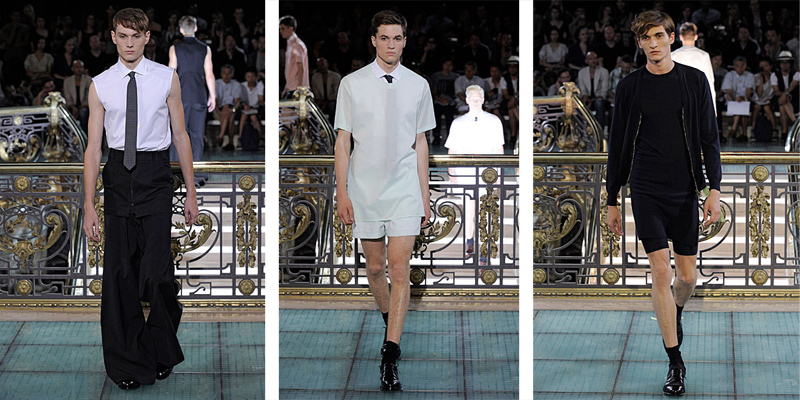 Raf Simons
Like Prada, Raf Simons, in his 15th anniversary collection, took us on a sojourn to a hospital ward—the gay hospital ward. The men’s apron look initiated by Margiela has now devolved into the trampy male miniskirt, a progression we can wholly get behind. Worn over a pair of immensely baggy trousers, it provides an effortless techno sway, and worn over shorts it’s downright tarty. While we could do without the printed color blocked pieces (most especially the t-shirts) and the overzealous zipper embellishments, it was an overall reinforcement of the rage that is Raf. 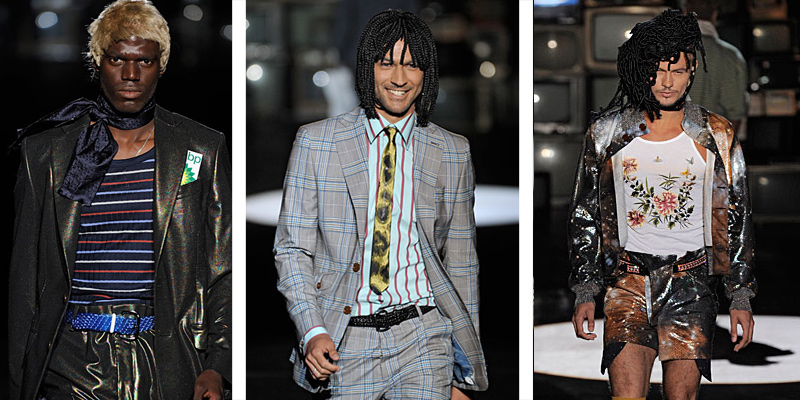 Vivienne Westwood
Vivienne Westwood wins for best beauty. The stunning hair pretense hearkens to the oddity of avatar design, with flipped out blond shags, finger-wave falsies, shiny copper pageboy wigs, Rick James plaited bob, and—in the event you cannot get your wig ready in time to hit the high street—hair powder for an artificial color concept. Vivienne provided us with next summer’s essential flip-flop, stupendous archive-printed umbrellas, and her signature gentleman-gone-mental aesthetic. From ill-fitting printed suits and ties to patchwork leather jackets to deranged golf-wear to dress shirts tucked into speedos, there is something for everyone, from the Manhattan Mall to the Jamaica skate park. 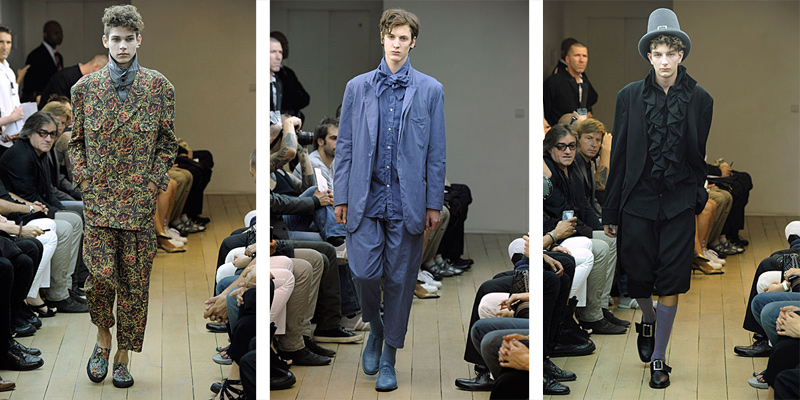 Yohji Yamamoto
Yohji’s plethoric pilgrim look was a shocking creation: debatable, controversial, and altogether desirable. He incorporated naturalistic prints and made the best use of monochrome colors this season. This was classic Yohji brought back to life—without any black!—as a mid-90s/Edwardian hodgepodge of critical eras. Standout pieces include the perfect men’s shirt dress (look 9) and look 36 as a whole: the polo dress with a linen blazer and long shorts. This combination might sound wrong but looks so, so right. 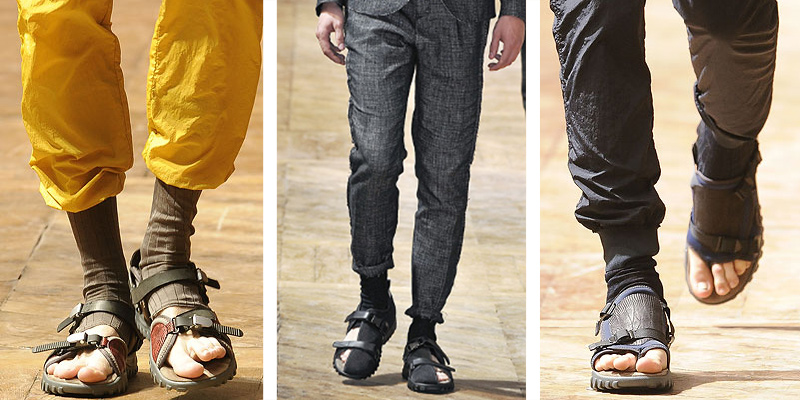 Lanvin
With this collection, Lanvin proved that the shoe really can make an outfit. We were scarcely able to concentrate on the clothes, instead finding ourselves transfixed by the ingenuity of halfer sandals, thong Tevas, and of course our favorite: the sock and sandal combo. Thanks, Alber and Lucas! Because of you, Teva and every other men’s athletic sandal brand will be gearing up for a creative renaissance! Your half-sandal and thong Teva were two of the best revelations in sportswear to date. The heavy knit biker short and puckered pajamas were pristine… but DIS in no way endorses that any conscious consumer be caught dead in that jewelry. 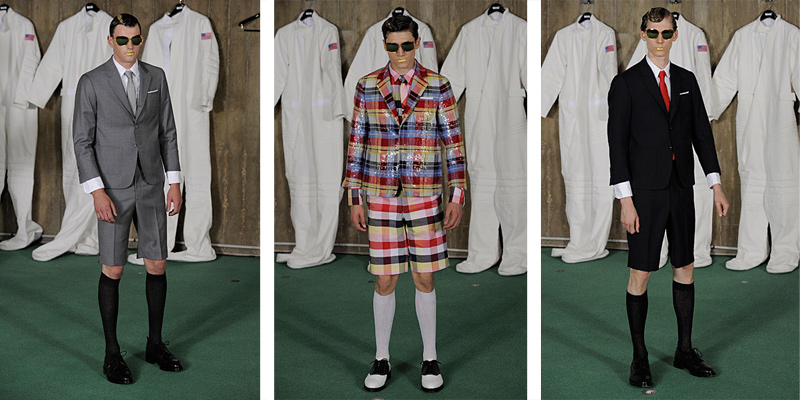 Thom Browne
This is such a quizzical fashion industry phenomenon. Who told Thom he could make a career out of repeating the same short suits, season after season, ad nauseum? Other fashion sources call his choices of cheap spacesuits and gold lipstick “witty”; we call it dressing up drivel. The proportions are not quite short or small enough. The sleeve and pant legs may have crept up an inch or so since last season, but this does not make a big enough leap to impress. We are dutifully directing our gaze ahead to next season, when hopefully Mr. Browne will push through with 3/4-sleeve suits and capri pants, the natural culmination of his painstakingly slow progression of silhouette. 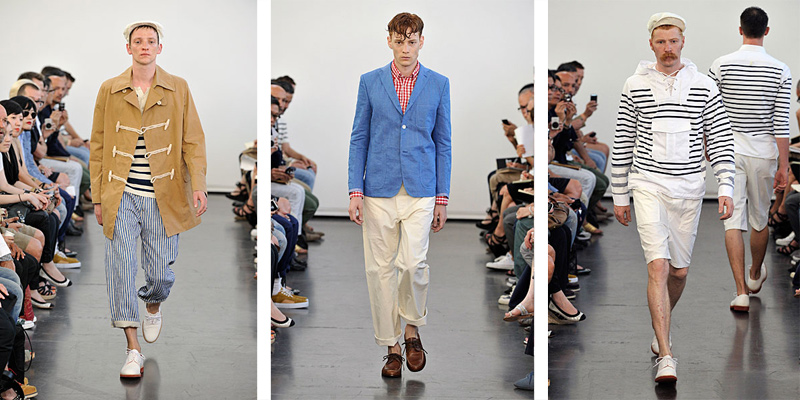 Junya Watanabe
It’s flat-out hard to reconcile the design and the price point of this collection. Its very existence is at once a waste of time and floor space. The artistic direction is hopelessly generic and trendy. While it takes no risks inherently, Mr. Watanabe took a severe risk in showing it. He should know better than to pretend this nautical hi-Uniqlo collection is anything that his consumers should see (and buy)! It’s clear, in this instance, that the men’s collection is paying for the women’s range. 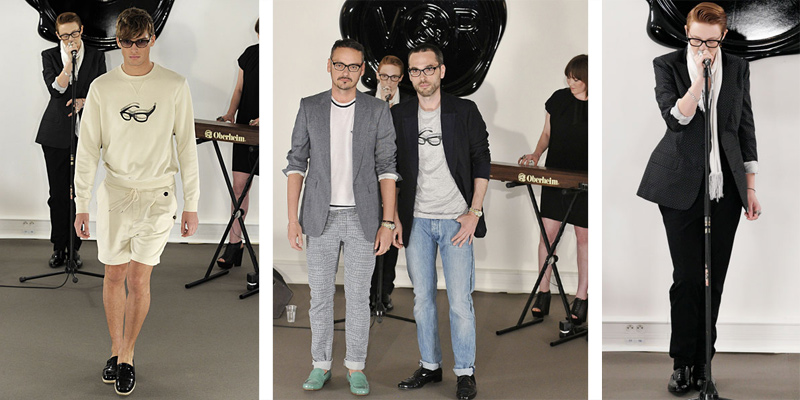 Viktor & Rolf
Even a drop shadow can’t hide the truth about Viktor & Rolf this season. We could barely click past the personality glasses sweatshirt (behind which appeared La Roux in her own pair of personality glasses) without clicking out of the frame. Do Viktor & Rolf even require prescription glasses? We highly doubt it. This pair is quite sadly and obviously stuck in their H&M heyday, their designs: trickling down from some thoughtless corporate mood board. 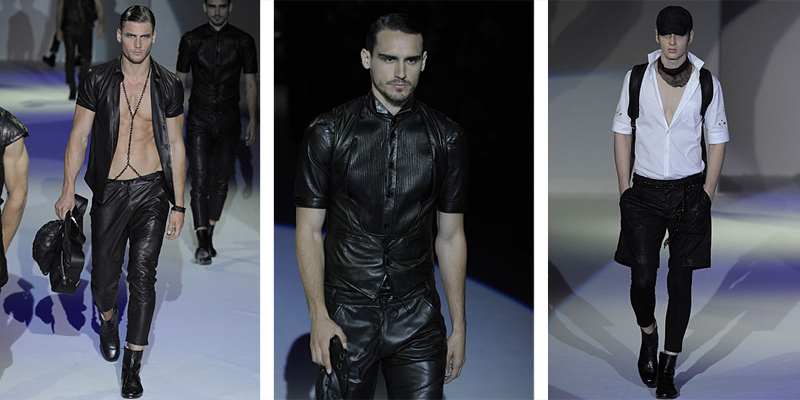 Emporio Armani
This collection is trying so hard to earn controversy that it may actually be working. A clunky knock-off of last season’s “edgy” details, this collection is not only still stuck on shorts over leggings, but also aviator glasses, circular pant seams, unzipped chelsea boots, grommeted pants, and studded novelty high top shoe tongues. Although trying to reinvent the suspender with a chain halter top is a noble goal, and camo is always welcome, Armani’s showcase of Los Angeles clubwear seems to have pegged everything wrong. The worst offender: that sheer handkerchief. 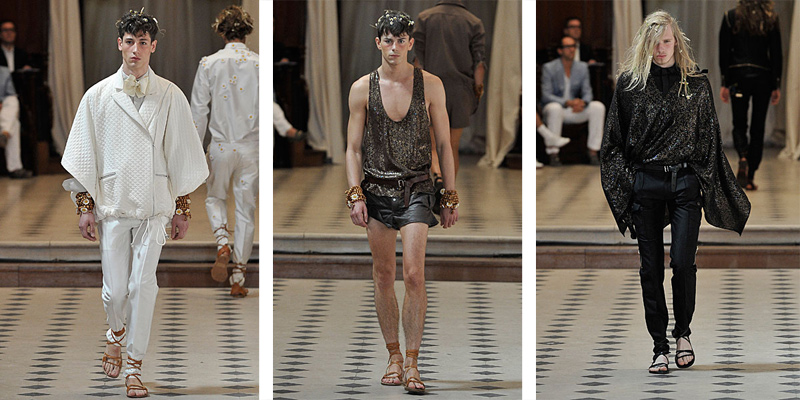 Alexis Mabille
There is something pervy in a negative way about Alexis Mabille’s flower-power creep-aganza. Sure, it is rife with the trimmings that make up many a terrible collection: superfluous belting, gladiator sandals, prayer bead bracelets, goatees; but perhaps the most disturbing aspect to this range is its bizarre contextualization of the San Francisco hippie as twinky Parisian sportswear. Something about a grown man in a romper coos adult-babyism, while a Chinese-sun motif of fabric blocking paired with a bow-tie and cargo pants simply comes off confused and incorrect. Throw in some sleeveless vests, slouchy tank tops, and lamé speedos, and you have an American Apparel pot brownie that no one in their right mind should ever want to swallow.