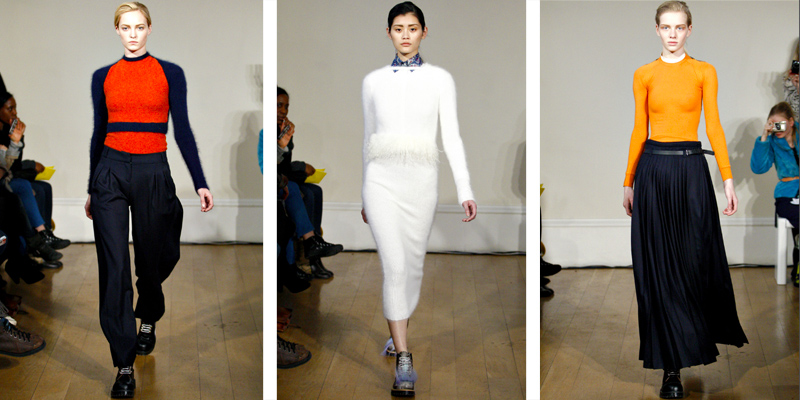 J.W. Anderson
Your daughter has gone off to college and come back a lesbian, and her expression of bored repulsion intimidates the crap out of you. Ivy league lesbians have scarcely been more attractive than in this collection from J.W. Anderson. Pleated paisley aprons over pajama pants are a frumpy revelation. The use of darling textiles in butch cuts builds a smart powerful femininity that also ridicules femininity. This is smart-ironic fashion used for intimidating girls. 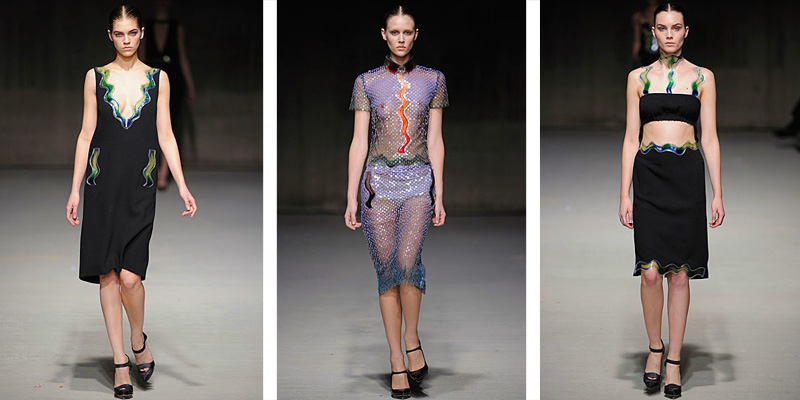 Christopher Kane
Medium taste is once again a touchstone for Kane. The crocheted knits, sometimes printed on leather, are a nod to Roseanne’s sofa: an emblem of American trans-fat comfort. Turned into a varsity sweatshirt, they come off cool. A v-neck? Perverse. Nickelodeon Network squiggle embellishments filled with glycerine (or Gak®?) produce an element of kindergarten kink. When isolated as spaghetti straps, chokers, and halters, they reconfirm Kane’s commitment to Contempo-skankwear. Though he is often compared to Gianni Versace, maybe he’s more mini-Miuccia. 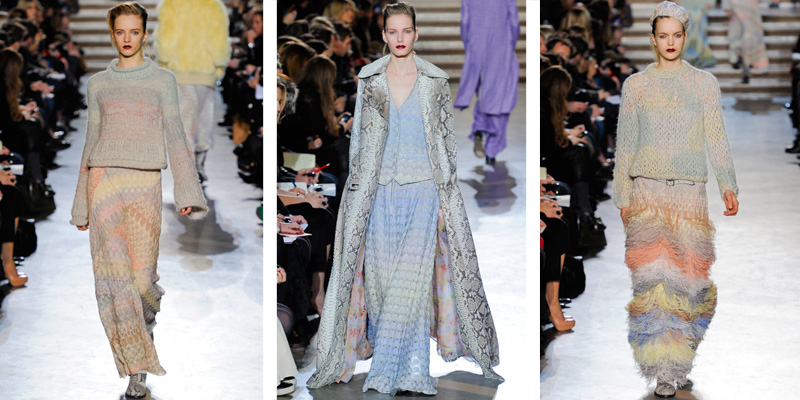 Missoni
Acid in the desert isn’t only for springtime; anyone who’s done it can appreciate this collection. From the Juliette Lewis-inspired casting and makeup to the oversize python trenchcoats, the sun-bleached palette offers an alternative riff to the dark hues traditionally accompanying fall/winter seasons. Equal parts grandma and little girl, fairies and raves. 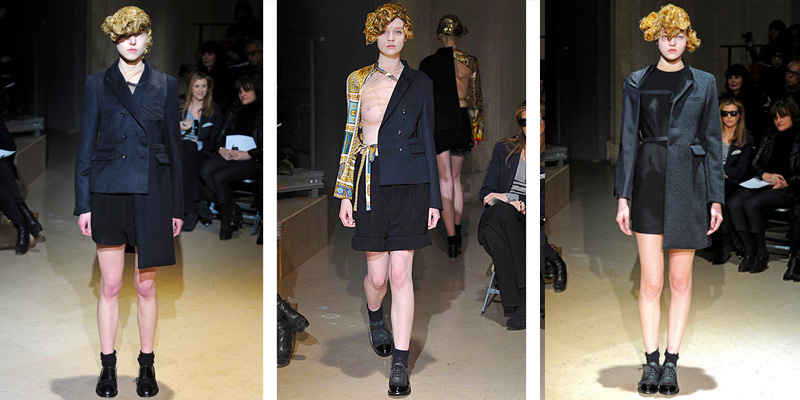 Comme des Garçons
Think of all the beauty in the world waiting to be combined: the limitless combinations left to represent hopeful change for the world. Coarse coalescence of miscellany misrepresenting each component as homemade but made so skillfully that they are fine. Like panic knotted into a clown’s ruffle and wringed of its tears into gowns. This collection is a sentiment to our transition into the open-ended. 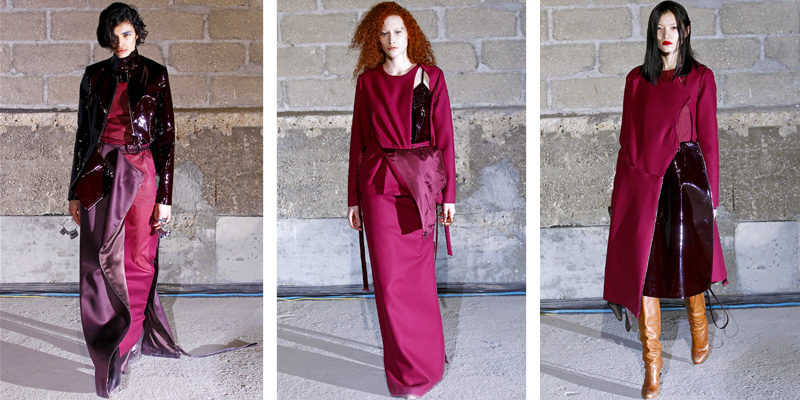 Maison Martin Margiela
This collection is particularly unphotogenic—in a good way; the side-contour zip closures are quite challenging to internet-only appreciation. In any case, the chance to turn a dress into a coat in order to reveal a second tier of garments is a genius option for fall. Accessories also have their counterpart, an incarnation of rings with dangling giant hoops. This collection simultaneously functions as a line of new maternity wear, presenting remarkable new methods for breast feeding! 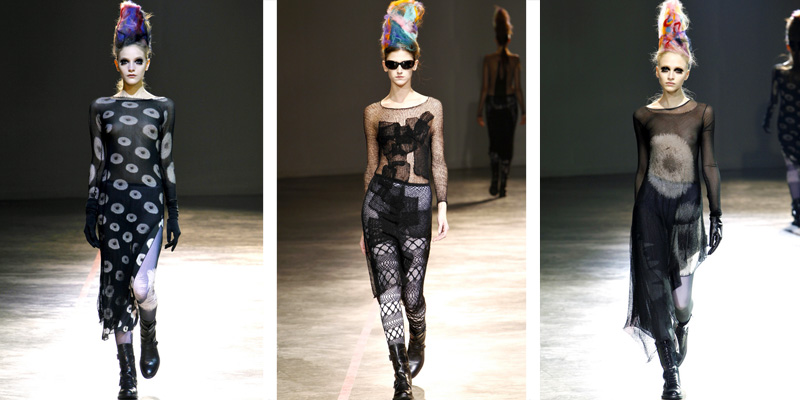 Yohji Yamamoto
Yohji’s self-professed flower power phase is less ebullient ‘60s daisy chain than late-’90s Lilith Fair, and the timing could not be more critical and precise. Printed black sheer knits forming asymmetrical dresses, once paired with combat boots, printed tights, and treasure troll hair created an alternagirl extravaganza. A Shirley Manson panorama? Back in the ‘90s, there was an unstyled sophistication that came with guitars, burgundy lipstick, and smudged eyeliner that has since gone missing—before we traded in Tori Amos for Florence Welch, before sequined tube dresses and over-the-shoulder poses became de rigeur tabloid-era safe mode for female singers. Back in this fabled era, Courtney Love wasn’t afraid of her midriff, and Gwen Stefani wore blue fur bras. A dress over a pair of pants wasn’t an US Weekly “Don’t” and guess what? It still isn’t. 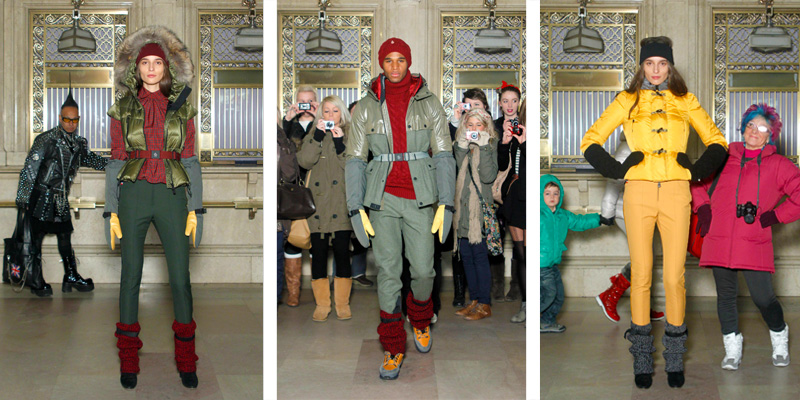 Moncler Grenoble
For Moncler, it’s not the puffy coats we’re seeing; it’s the spectacle of an enormous brand repositioning effort. Although they really went all out in the Moncler Rouge presentation with weather pyrotechnics and shivering theatrical modes, this Grand Central Station flash mob lookbook got the DIS stamp of approval. It featured whole families of tourists, a skater and that punk guy that’s always hanging around Grand Central and never taking the train. We hope this viral marketing scheme continues! 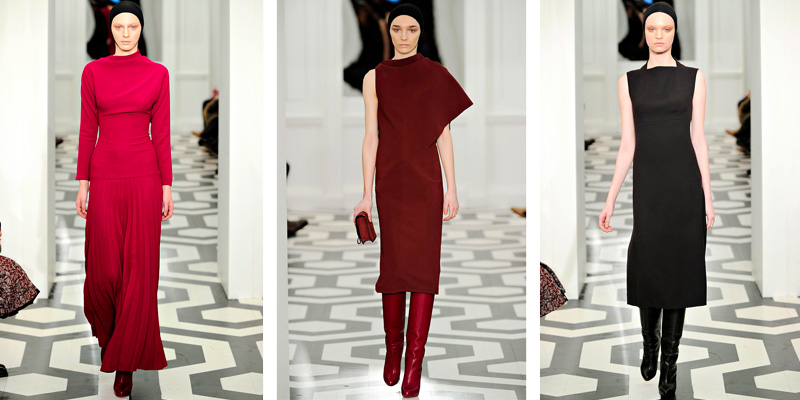 Victoria Beckham
It’s a bad season when Victoria Beckham makes it into the best list, but here we are. The colors and proportions were right, and the cuts were beautifully chaste. Below-the-knee skirts perfectly hit the top edge of matching-color knee-high boots, occasionally exposing just a sliver of skin. The team behind the brand has been designing consistently modern, minimal, and relatively modest dresses for the tastefully conservative. Although Beckham herself is often just shy of exposing a nipple, we applaud her for thinking ahead, choosing to produce fashions that she’ll probably wear in her not-so-distant maturity. 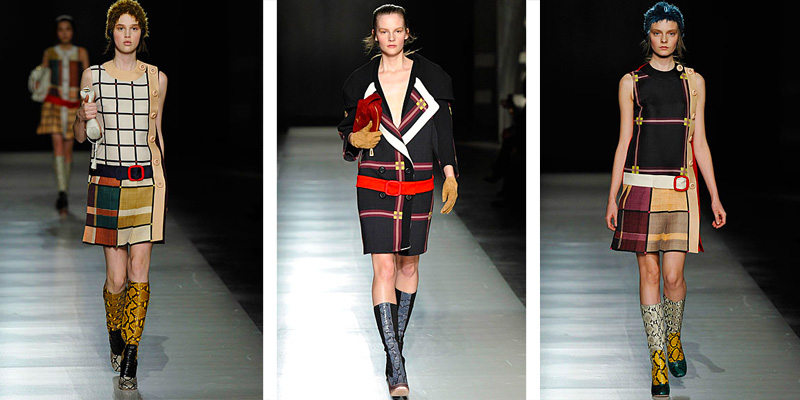 Prada
We all know Prada is the best overall. The sick genius behind Prada is Miuccia’s ability to elevate ugly and grotesque. This is a classic case of Stockholm Syndrome: the paradoxical psychological phenomenon wherein hostages express adulation and have positive feelings towards their captors that appear irrational in light of the danger or risk they endure, essentially mistaking a lack of abuse from their captors as an act of kindness. This collection is abusive, but we yearn to love it and our captor, Miuccia. For the die-hard Prada devotees it’s going to be a rough season. We hope you have narrow hips. 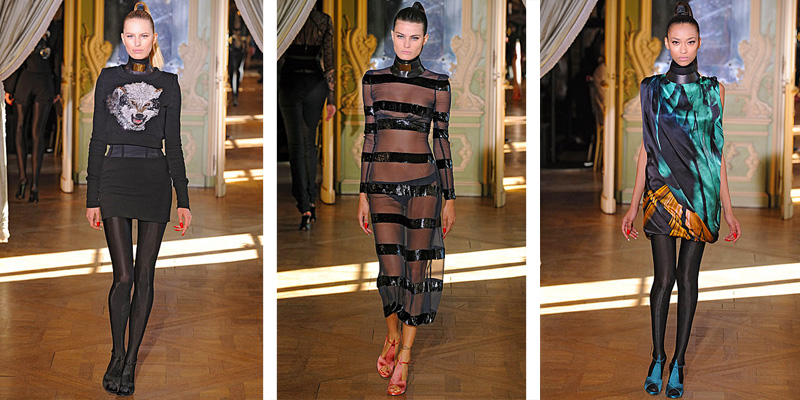 Ungaro
Giles Deacon’s attempt to encapsulate the essence of a maneater resulted in embroidered animals on irregular overstock sweatshirts, but hasn’t Givenchy already embarked upon this track? What results is another redundant and poor emulation of caged fierceness using S&M dog collars… How naive. The surrounding trappings of feather trim, sheer lace, and bitch pumps seem to have been pulled directly from the set of Mischa Barton’s fatal CW series, The Beautiful People, a failed experiment in telegenic, Top Model-era glamor ignis fatuus. Zac Posen is liable to sue for copyright infringement. 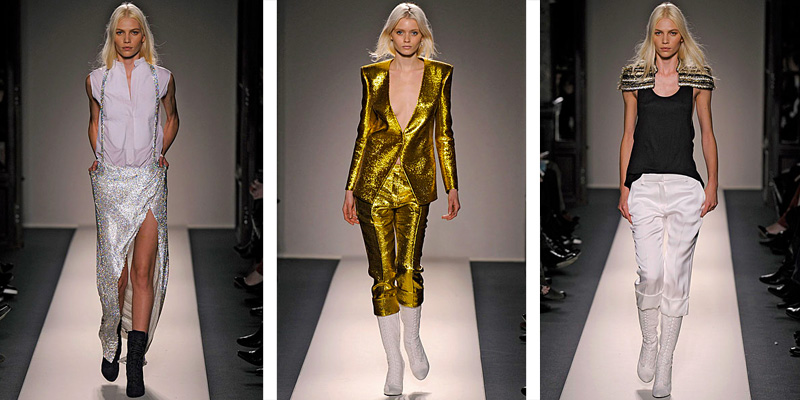 Balmain
We know that Christophe Decarnin had nothing to do with this collection, but it breathes the essence of his insane soul. As a law, his inspiration alternates each season between punk and glam rock. So, we saw it all again here, a bra-less slut in tinsel, the pointy gold leather and fur shoulders. Next up, a silver lame skirt with built in skinny suspender straps. This is Blake Lively on a very bad day. There is perhaps something in this moment waiting to be said about crazy people and shiny things, but we’ll pull a 180 from the ideology that bred this fiasco and leave it as a subtle idea for you to contemplate on your own. 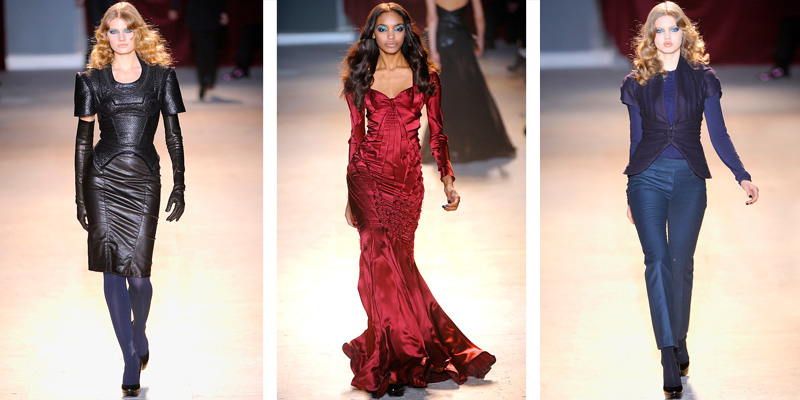 Zac Posen
Color blind? Season after season Posen has proven he has a color vision deficiency. This time around, it seems he can barely see at all. The models looked pissed to be walking in hapless disasters. Their bodies were either bursting seams or barely filled the ill-fitted, skin-tight attempt at a tailored look. Here is the classic case of an aging and out-of-touch New York designer who thinks he’ll revamp his career by showing in Paris. 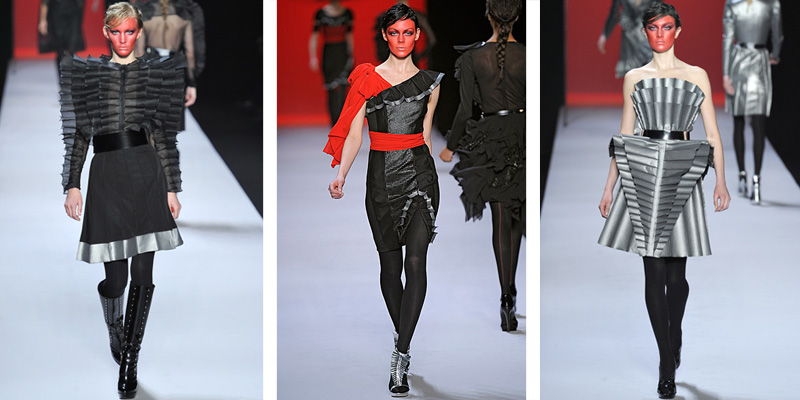 Viktor & Rolf
Viktor & Rolf haven’t been conceptual in a long time. Stop trying to redefine volume with ill-conceived, unwearable geometric ruffles. It’s irrelevant, unnecessary and above all, it’s ugly. The duo’s show notes elaborated: “We felt the need for protection… Fashion’s ever-increasing speed reminds us how important it is to battle for our creativity.” The designers’ impulse and ability to justify their designs is at the heart of the problem. Viktor & Rolf must seek counsel. Analysis, hypnosis, exorcist, whatever it takes. Or, give it up and do a denim line already. AND RED FACE? Enough said. 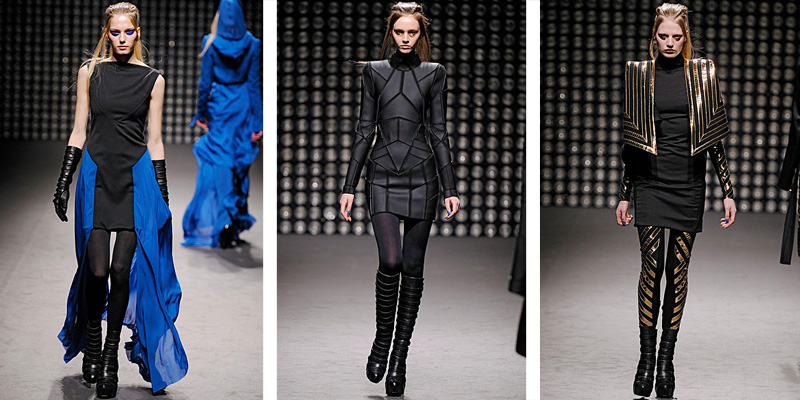 Gareth Pugh
This is a huge step backwards for Gareth Pugh. We know it’s nothing to make fun of when a young designer’s funding is ripped out from beneath them—we’re just speculating, but that is what happened, right? The clothes looked cheap… really cheap. Gareth, if you can’t afford quality fabrics we suggest scaling back to your low-budget video presentations circa 2007. You’re already ripping yourself (read: Rick Owens) off, so you may as well have Nick Knight direct you a fashion video and call it a day. Pointy triangles, exposed gold zippers, that shoulder, the blue iridescent nail polish and terrible makeup, no more! 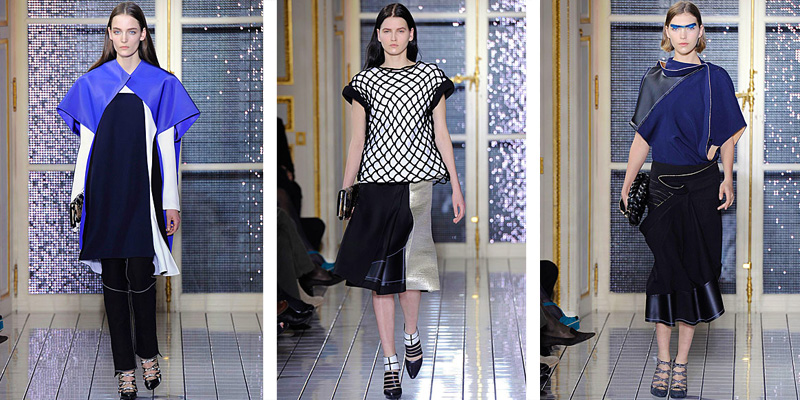 Balenciaga
Our admiration for Ghesquiere’s Balenciaga did not suddenly shift to DISlike. It was a gradual transition from creative to contrived. The tube knit jackets are great, but BLESS made them better a few years back. Otherwise, it’s back to a stale rendition of the “futuristic”. It has become borderline retro for a designer we know has the potential to be progressive. There is no step forward made with more asymmetrical patchwork in heavy strips of leather and wool. 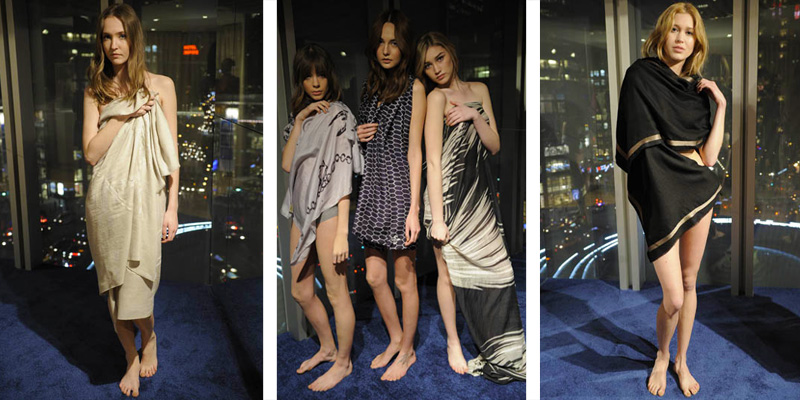 House of Waris
Are you kidding me? House of Waris, really? How humiliating this show must have been for the models. How long did they have to stand there half naked, clinging to a yard and a half of fabric looking morose? Which void in the market does Waris need fill? Another name attached to another nonsense brand.