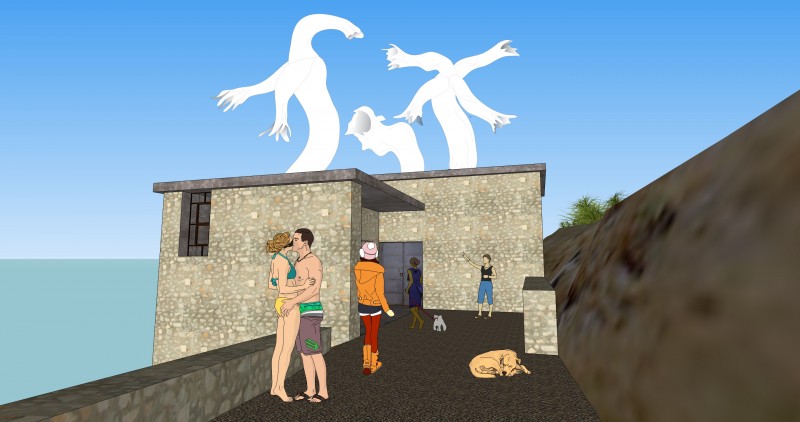 In 2008, the Municipality of the Island of Hydra, Greece, granted The DESTE Foundation for Contemporary Art the island’s old slaughterhouse. The recently restored and renovated building retains the features and traits of the past, preserving the original elements of its old identity while serving as a unique exhibition space. Every summer the Foundation hosts a series of contemporary art exhibitions on the island, including the assignment of the space to a single artist or team invited to stage a unique, site-specific exhibition.

This summer, Paul Chan has created three outdoor works inspired by Plato’s “Hippias Minor” installed on the roof of the Hydra Slaughterhouse. One of Plato’s most controversial dialogues, “Hippias Minor” details Socrates’s confounding arguments that there is no difference between a person who tells the truth and one who lies, and that the good man is the one who willingly makes mistakes and does wrong and unjust things. But what if Socrates wasn’t merely championing the act of lying—as it has been traditionally interpreted—but rather advocating for the power of the creative act?

In tandem with these sculptures, Paul Chan’s independent publishing house, Badlands Unlimited, is co-publishing (with Deste Foundation) a new translation of “Hippias Minor” by Sarah Ruden. In Hippias Minor or The Art of Cunning, the dialogue is illuminated as a provocative theory about how art is a form of wrongdoing, and that understanding art makes life more ethical by paradoxically teaching people to be more cunning.