When asked about the “anti-humanist” conviction in cyberpunk, Bruce Sterling answered that “cyberpunk genre is not simply some literary stunt to outrage the bourgeoisie; this is an objective fact about culture in the late twentieth century. Cyberpunk didn’t invent this situation; it just reflects it.”
So does work by Simon Denny—born 1982, to represent New Zealand at the 56th Venice Biennale in 2015: meeting points, figures and processes behind the major brands of today reflect a technology-rich media economy in its complex form. With “some kind of gnarly tech moments”, he admits. 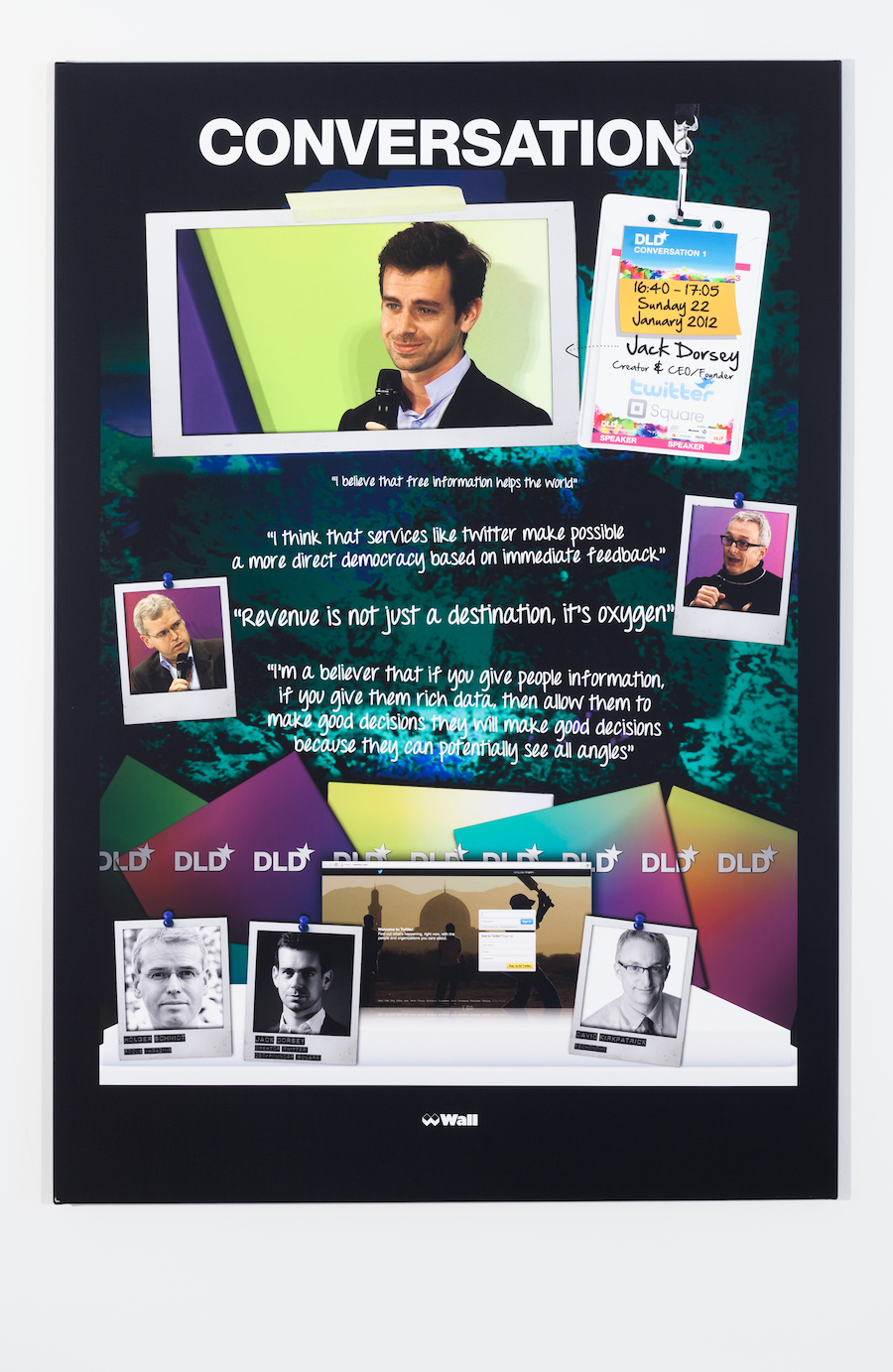 Valentina Sansone I was in Munich when I started working on this interview and I realized that you spent a few months there for your exhibition at the Kunstverein München (2013).
The urban landscape doesn’t look so futuristic, rather I guess that it is the quality of things happening here to paint the modern face of the city.
How many events such as the Digital-Life-Design (DLD) take place worldwide at present and why did you choose the Munich conference?

Simon Denny There are really a lot of tech conferences that happen worldwide, there are plenty just in Germany. In the last two years just in Berlin Hy!, Tech Open Air and the international TechCrunch Disrupt all had inaugural events. They are a prolific and totally current phenomenon.
For my timeline project, DLD seemed a really good example to focus on for a combination of reasons. Firstly, it is one of the best-known events like this in Europe, and one of the older ones (it started in 2005). This is comparatively prestigious and well regarded within the international Tech community, they seem to get high-pedigree speakers continuously. The DLD 2012 program included a lot of very well known and influential people in the sector. It was also the most recent event when I was producing it, and I wanted the one year short history to indicate the amount of change that happens in this industry in one single year. I wanted the exhibition to somehow be a portrait of a world and that program seemed like a pretty good snapshot of the Tech sphere and its interests at that moment.

The other thing which really attracted me was the emphasis DLD puts on design and presentation. Particularly the 2012 edition had an amazing stage set and branding. There was a very colorful stage with gradients that was a kind of futuristic abstraction of the Alps, and another “ye olde” mountain shack with rucksacks, taxidermy and guns adorning the walls. For a project that was also focusing on time, these were a huge draw also. As Apple was such a massive market leader in 2012, I encapsulated each talk in a graphic canvas that tried to follow the most extreme aspects of the then current design structures from Apple’s iOS 6, basically GUI skeuomorphism. This is a representation convention that Apple has used right from the beginning, where realistic renditions of everyday objects stand in for functions in a computer interface. The very visual object-focused stages of DLD12 really lent itself to this treatment (i.e. fake wood backgrounds, lanyards, Polaroids with pins etc.).

VS How much do you think this conference really contributes to the construction of a network?

SD Conferences like DLD in the tech economy are central events for networking and DLD has a lot of pull as a well-funded, well-connected event. This event is widely regarded as high quality particularly in terms of who is there —and attendees and speakers are very well looked after. A Wired quote from the DLD wikipedia page demonstrates: “There aren’t many conferences in the world where you can run into The New York Times publisher at breakfast, have lunch with a Russian Internet multimillionaire, hear the Icelandic president talk at dinner, and be bought a late-night drink by Facebook’s first president, Sean Parker. Add a keynote speech by departing Google CEO Eric Schmidt, stage interviews with James Murdoch and Groupon’s Andrew Mason, as well as a music set by Duffy, and you can understand why Germany’s Burda media empire has made its DLD conference the hottest by-invitation ticket in Europe.”

VS DLD is a global network on innovation, digitalization, science and culture that connects business, creative and social leaders, opinion-formers and influencers for crossover conversation and inspiration.
As part of the so-called cultural and creative system, how do these topics deal with practices more typical of your work, such as production and distribution for instance?

SD The people who appeared in the DLD conference are a group of people that are really responsible for shaping a lot of the systems that we use to interact with the world.
My work has often focused on changes in hardware, in structures, and the ways that systems influence how we can communicate. “Production” and “distribution” of any content are affected by the decisions of this group of people —Jack Dorsey and Twitter encourage the proliferation of succinct statements that are real time and public; Sheryl Sandberg and Facebook structures our social interaction and how we manage our acquaintances and public face; Brian Chesky and AirBnB enact the “sharing economy” and so structure our experience of place; and Drew Houston with Dropbox enables working across vast distances in a different way than was possible in the past etc.
Essentially the production of experience is increasingly affected by these kinds of figures. All of these people spoke at DLD 2012. To look at the words and images they use to describe their view of the field they operate in seemed like a worthwhile task. 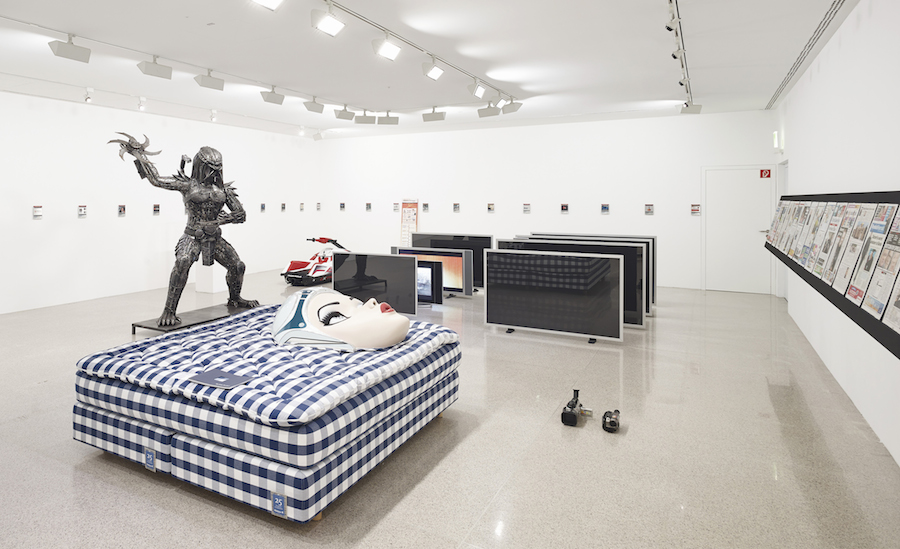 VS The title of your show in Munich was “All you need is Data – The DLD 2012 Conference REDUX” from the 2012 edition of Munich’s annual Digital Life Design (DLD) conference which had the theme “All You Need Is … DATA?”.
The exhibition title itself includes an artistic appropriation operation which is part of the whole process. How did the selection of materials from the conference work?

SD As a first step I sought permission to work with images and text from the DLD 2012 conference from the rights holders —DLD and Hubert Burda Media. They liked my idea of doing a very short history, a three-day timeline of the entire 2012 event, presented exactly a year later at the same time as the 2013 event. They then made design files and a copy of the live edit of the HD video that was made of the entire three days available to me. I then simultaneously worked on watching and transcribing the 80 odd hours of footage from the video and extrapolating some sort of design and display logic that combined and emphasized elements of the DLD visual identity. I isolated stills of key speakers from each talk, chose between 3 and 8 quotes that stuck out from each panel —either because they were insightful, entertaining or revealing in some way. I then combined all these elements into a single panel and used one of the two templates I made based on the reprocessing of the conference’s stage and graphic design. As a result you get a kind of short visual and textual summary of each of the 89 talks. As a viewer you get a little overwhelmed with the volume of the material, but you can also pick and choose your way through the conference —which is a feeling not unlike being there, in a way.
About the appropriation process, I think that it’s just so commonplace to use images created by other authors to illustrate a point very casually that reusing images in art doesn’t feel unusual anymore. It’s hard to find art that doesn’t do this in some way, either with objects, images or processes. The way this is done is more important than the act of doing it in itself.

VS As one of the winners of the 2012-13 Ars Viva prize you have been invited to do a group show at Kunstmuseum Liechtenstein in Vaduz. Instead you organized the very first TEDx conference ever to happen in Liechtenstein.
TED started out in 1984 as a conference bringing together people from Technology, Entertainment, Design. The invited speakers’ list included artists, a consultant for public interest foundations and philanthropists, a designer, a commercial lawyer, and a political scientist amongst the others. What was the idea of this conference about?

SD The TEDxVaduz conference is a collaboration with artist Daniel Keller. We have both been interested in the values, aesthetics and tendencies of those involved in the Tech economy and the ideologies of Silicon Valley for a while. TED is an original blueprint for a particular kind of ideologically driven public speaking format which has spread to influence all other Tech presentations; it started generating licenses to 3rd party groups to do “TEDx” events —that emulate TED— in 2009.
We thought that an official TEDx, as an independently organized TED event, would be the perfect vehicle to analyze these values that somehow come with the format; and that Liechtenstein would be the perfect place for our attempt at a meta TEDx.
Liechtenstein has the highest GDP per capita and the lowest external debt of any nation in the world. It has also been labeled a tax haven at times. Vaduz is where the financial sector is based.

There were nine live presentations in total. We invited speakers that had relevance both to TED as a brand and to Liechtenstein: Emily Segal is an expert in luxury markets that used to work for the company that rebranded Liechtenstein but is also an artist and part of the trend forecasting group K-HOLE; Femke Herregraven spoke about her project Taxodus, a computer game/visualization of how offshore tax havens work; Peter Fend spoke about how certain parts of Liechtenstein could be taxed in ways that would encourage more efficient use of land and energy. 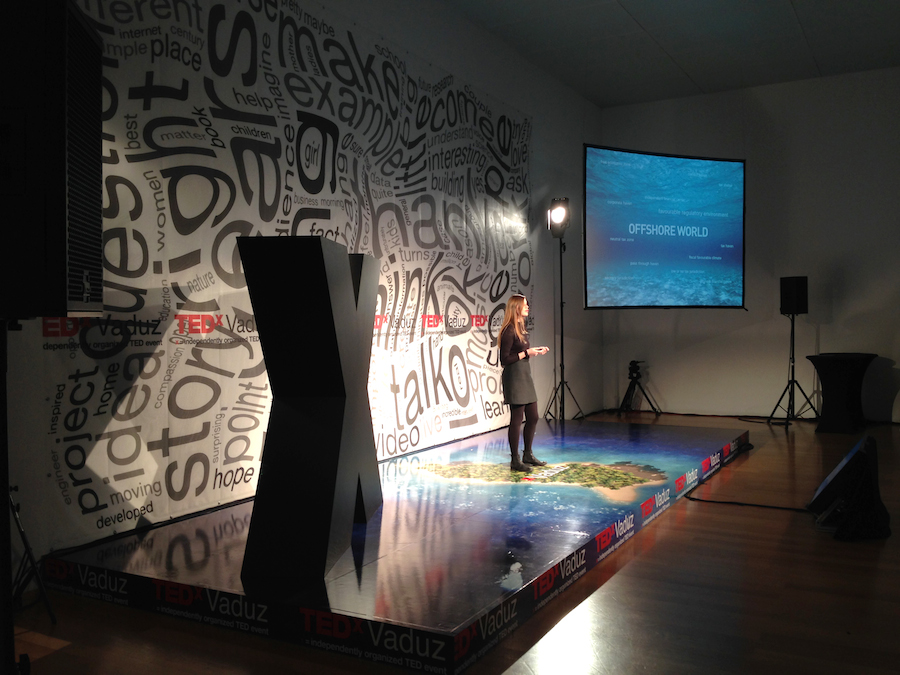 Daniel and I designed the stage set and backdrop for the event, which adhered to TED’s clear rules. We produced a backdrop by developing a tag-cloud, a visual representation of the most popular words ever used in TED talks, and a stage playfully depicting double land-locked Liechtenstein as an idealized palm-covered island. This allowed all the TEDxVaduz speakers to speak from an island, likely using those words that were swirling behind them. 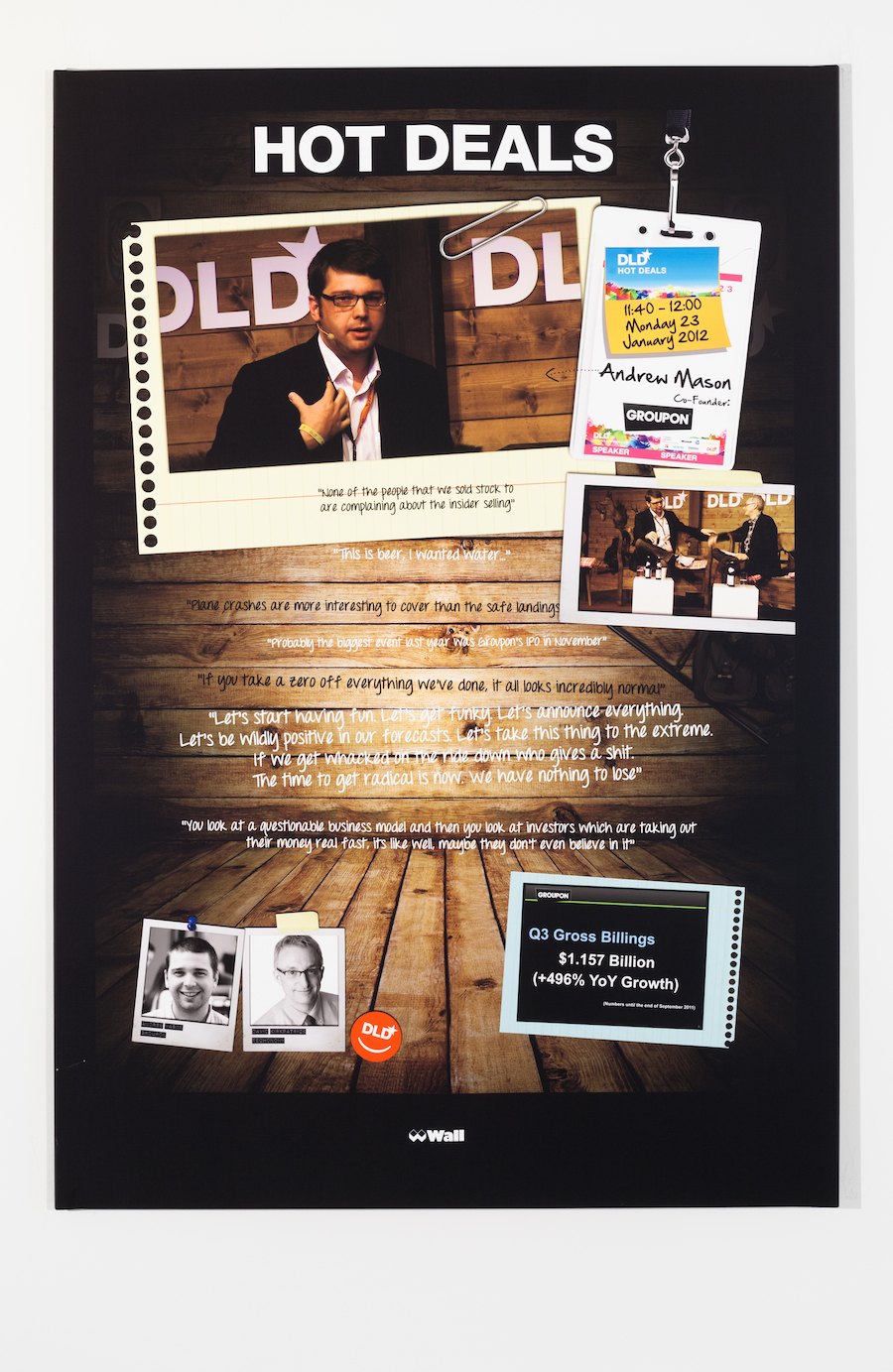 Valentina Sansone is a writer and curator based in Milan. Simon Denny lives and works in Berlin. His work is currently exhibited in the group show “Speculations on Anonymous Materials”, curated by Susanne Pfeffer, at Fridericianum  in Kassel which runs through January 26, 2014. Upcoming solo exhibitions and main projects include Galerie Buchholz, Berlin; T293, Rome; Portikus, Frankfurt; Bejing and Montreal biennales among the others.