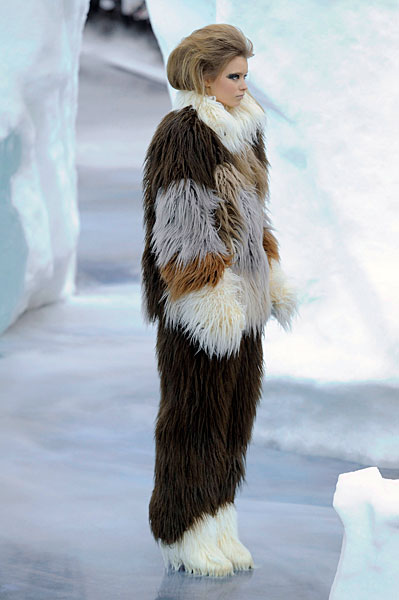 CHANEL
Karl Lagerfeld found inspiration in his own genius F/W 1994-1995 Collection, as well as bath mats, shag carpets, teddy bears and global warming. Extreme climate change calls for fur—fake fur… and lots of it. What is cunning about this fur is that it makes no attempt to look authentic. Unlike the multitudes of designers who employ the use of fur to get respect as luxury brands, Karl has the sense of humor and moral promiscuity that permits playfulness in a season of listlessness. 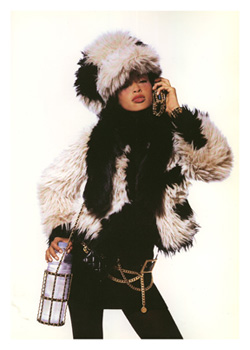 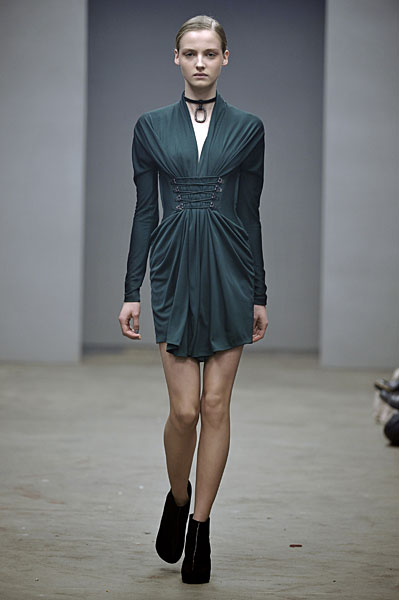 Marios Schwab
The Marios Schwab girl is a touch goth, a bit Renaissance fair, a shade witchy and often monastic. This bar wench/milkmaid has considerable sex appeal, an endless supply of chokers and a variety of distinctive necklines. We love all of that, but a big reason Schwab is one of our top favorites this season is that he managed to appropriate “historical costume” traditionally reserved for films and LARP festivals and make it brilliantly modern. The references are apt, and, combined, they create something we are really in the mood for. 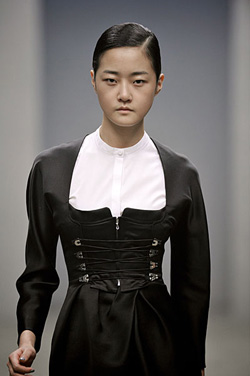 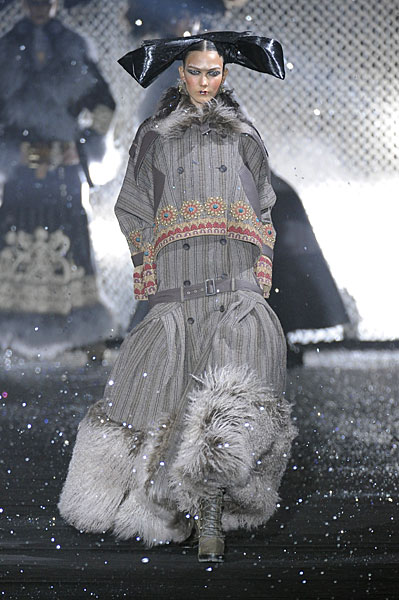 John Galliano
Cossacks, Circassians, the Caucasus Mountain range, frost-bitten Qajari unibrows, gigantic shearling-lined tea-cosey-esque Afghan hats, furry earrings rings and bracelets, high heeled Timberland-Dr. Marten’s mutant boots, Leon Bakst for the Ballets Russes and proportionally challenging fur-trimmed, floor-length “shorts” (or is it a coat?)! Phew! This collection is what Transoxiana’s courtwear would look like had Alexander the Great invaded Central Asia in 1994! We are well aware that this sort of culture sampling is not new to Mr. Galliano (similar references were made, albeit in a more beastly manifestation, in his legendary Fall 07 men’s collection), but this funky, militant stew straight from the steppes is spot-on for F/W 2010. 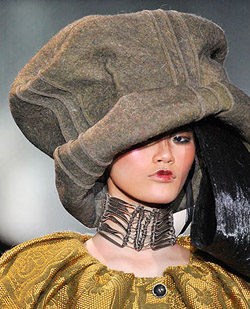 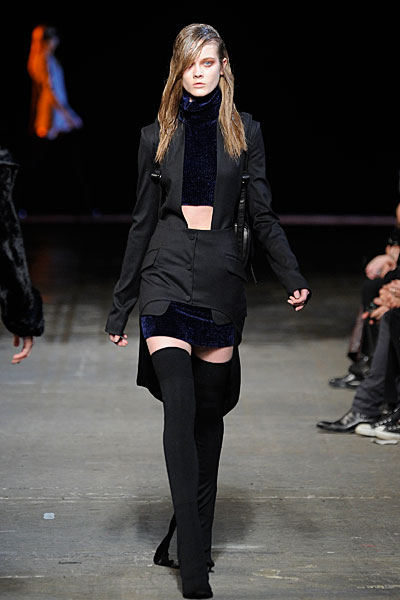 Alexander Wang
Wang stepped out in front of the rest of the New York designers to reference the 90’s with more specificity and detail than any other designer dares to. We’re talking Melrose Place. Our favorite TV drama. (You’ll see.) The materials alone will make you vomit (in a good way) chenille, crushed velvet, and pin stripes. But there’s more: flared knee-highs, exposed midriffs and vests! Wait and watch for the inevitable trickle down of this inspired motif in the coming months and seasons. 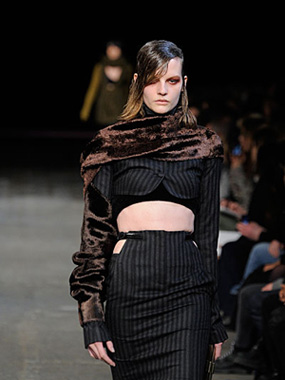 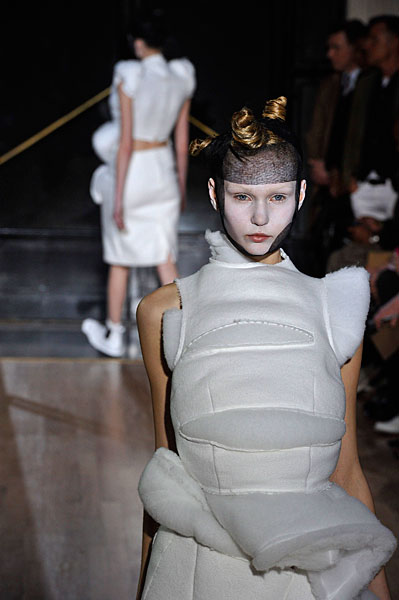 Comme des Garçons
Persistently unflattering but never boring, Rei Kawakubo raises questions. White dresses blister and erupt with what looks like packaging foam and artificial snow. No, it’s not the first time she has done something so “bodacious,” but it makes you wonder how far we’ve come from her groundbreaking Spring 1997 collection. Perhaps this collection is cry for help, screaming the question, “Have we learned nothing from Kawakubo in the last 13 years?” 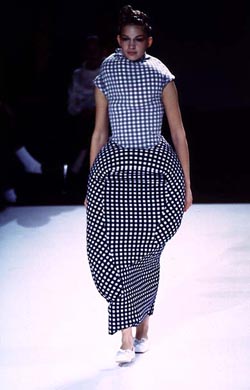 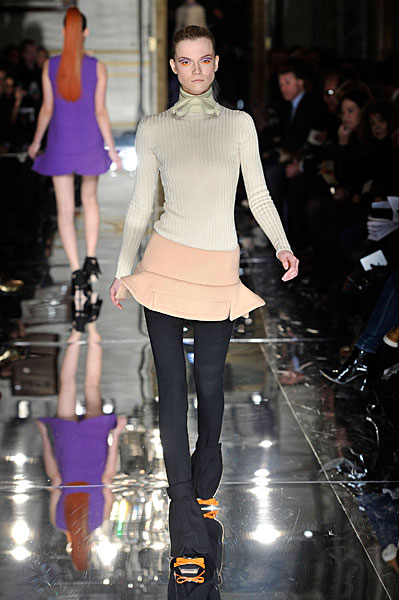 Miu Miu
In this solid follow up to her SS10 collection, Miuccia offered a perversely sweet and childlike collection for women who want to be girls. Reminiscent of that moment in the 90’s when the 60’s were all the rage, only with signature Miuccia weirdness… but still very Deee-Lite. Judy Jetson miniskirts and dresses teasingly flipped up and out, worn over ankle-flared pants feel flirtatious and fun. Wide ribbed turtlenecks and stiff wool bows around the necks are schoolgirl kink. Finally, she pushes the furry/fuzzy trend with bright purple faux fur coats and skirts. 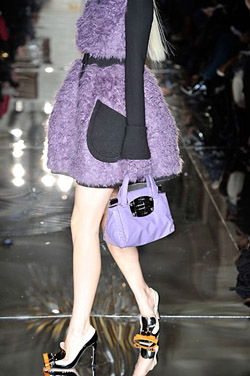 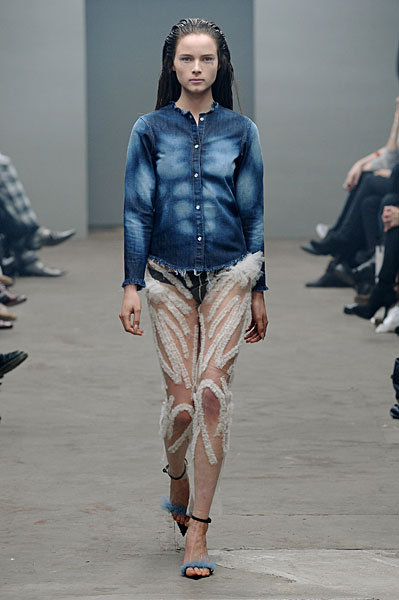 Ann-Sofie Back
For Fall, Ann-Sofie Back used her own winged, muscular Second Life avatar as model, muse and inspiration for a collection that finally brought 3D rendered, distressed denim to real life. Back constructed this glitchy wardrobe with unraveling knits and a series of six-pack, body-enhancing trompe l’œil looks printed on sheer tops, etched into demin jackets and gathered into abdomen patterns of sheer tulle. The process of going virtual was visceral as the models—with stiff, glued, avatar hair—came out looking like stretched and skewed generic CG sluts. They bore twisted proportions, distorted fabric FX and of course, totally fucked-up accessories. Applause for Back for her continual probing and on-point cultural dissection! 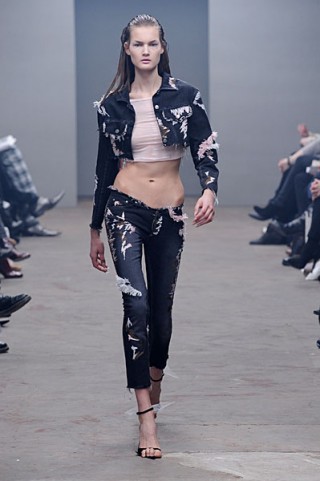 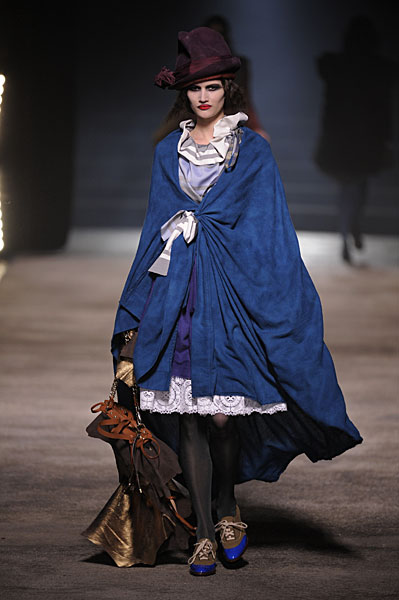 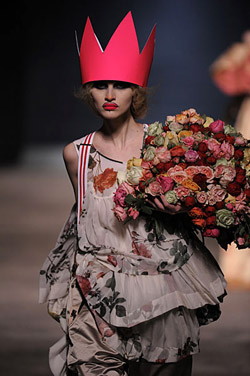 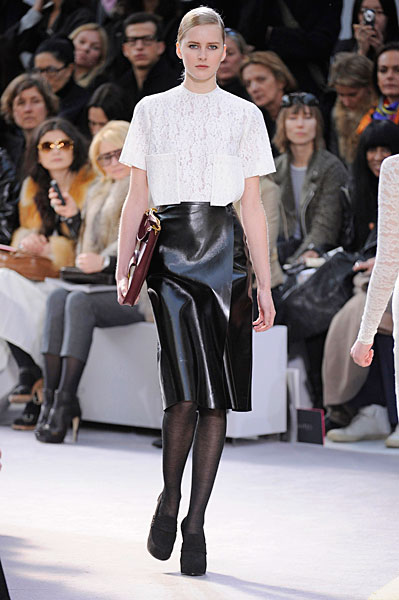 Celine
Since literally everyone copied Celine’s SS10 collection, it only seems fair to include her in our Top Ten. Phoebe Philo is officially a trend-setting tastemaker. She sees into the future, and she’s smart enough to set a trend a season in advance regardless of appropriateness. Leather shirts for the Spring? Sure, why not? White lace for Fall? Of course! 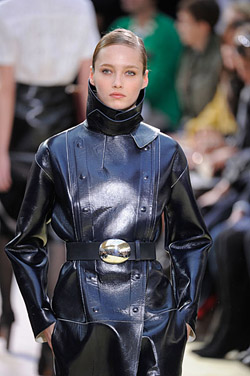 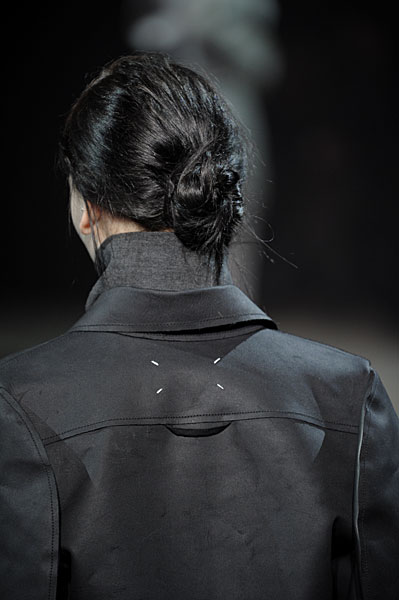 Maison Martin Margiela
This collection is like a shot of adrenaline straight in the heart for disciples of Margiela. Maison Martin Margiela has a design directive so clear and unambiguous that it should be sustainable without Martin Margiela at the helm (“foolproof,” one of our editors offered). However, last season this assumption came into question in a big way. This season we saw a comeback with an offering of the most experimental pant of the season. This season’s flat wide waistbands of varying proportions are the essence of the brand. 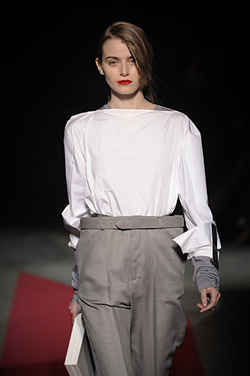 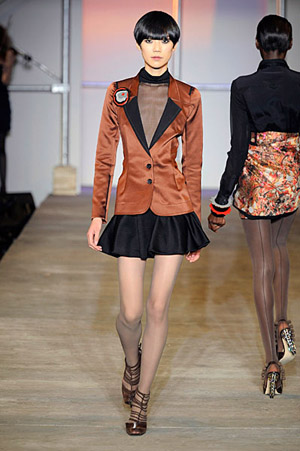 Zac Posen
This collection represents what TV audiences think fashion is, in an Ugly Betty episode with Project Runway cameos, in hell. Who looks good in shiny satin? The models don’t—and if they don’t look good, who will? The fur ankle boot may be the best part of his collection, but it doesn’t go with anything. The show ends with a knockoff of a knockoff. And why does Posen continuously make these plastic pins? Last time it was neon hands and lips, and this time it’s replicas of agate geodes with random rings of color. It’s so Natural History Museum gift store. He could have bought them on Amazon, but you know he’s mass producing them somewhere, which is even worse. 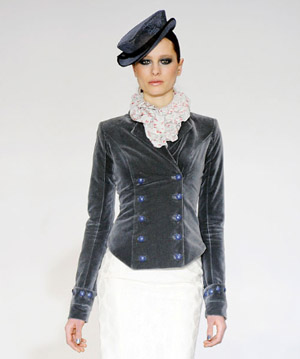 L’Wren Scott
That name, those dresses—she has nothing to offer. There is an overly uppity attitude and faux-decadence that is just altogether inappropriate. There is also the sense that Scott thinks she’s humorous. Nothing could be less true. Being a former model and a succubus to Mick Jagger does not a fashion authority make. This jaunty, rakish, English libertine/heroine she’s adopted is a cliché she has no claim over; and, frankly, one she is mangling. Suddenly she throws in a blue Grecian dress? That makes sense.

Balmain
Anyone who liked this and thinks Christophe Decarnin really has his finger on the urban pulse is over the hill and doesn’t understand fashion today. No, women don’t want to wear gold lamé blazers and brocade pants. Decarnin’s new shoulder shape is an obvious, albeit futile, attempt to recreate the buzz surrounding his SS09 shoulders. He wants to create iconic showstoppers for rock ‘n’ roll royalty, but unfortunately the emperor has no clothes. 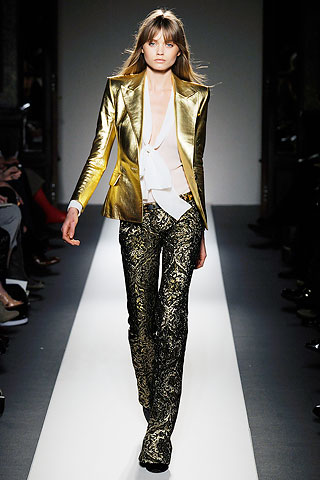 Nina Ricci
We totally see why Nina Ricci fired Olivier Theyskens. What a novel idea! They’re clearly much better off without him… on “Opposite Day,” in RetardLand™. Forget those masterpieces from when Theyskens ruled the house. Floral wreaths around the models’ waists, irreverent appliqués and superfluous belting: that is a relevant way to take risks. Keep doing that. Let’s see how it works out for you. 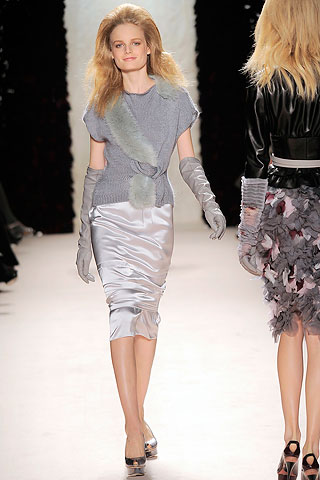 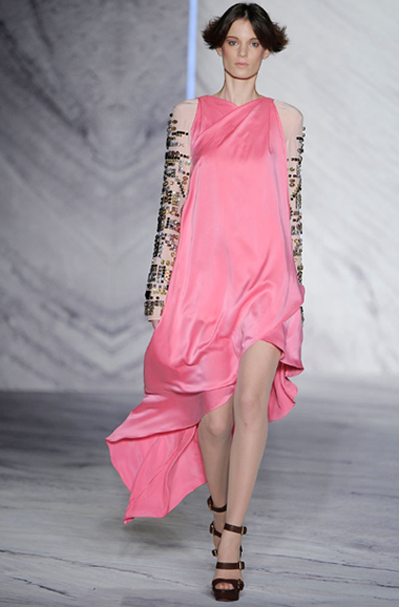 3.1 Phillip Lim
This season his knockoffs are slightly less obvious than before. But on the other hand, his personal taste is coming through, and it is scary. Phillip Lim may actually be colorblind. The whole collection from beginning to end looks like the result of a strenuous attempt at a story that has no context, nor meaning.

Giles
What a mess. 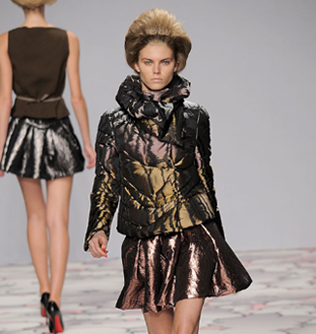 Doo.Ri
Doo.Ri’s line has no sense of direction. What is Doo.Ri’s “thing”? Doo.Ri needs to get a “thing.” She needs to go back to “thing” school. Take a moment to click through her collection, and when you’re done, click out of the window and try to remember one “thing.” You probably can’t. That’s a unique gift. You have to be really skilled at being unremarkable in order to completely lose your audience the moment they avert their eyes… which, if you’re Doo.Ri, is probably right away. 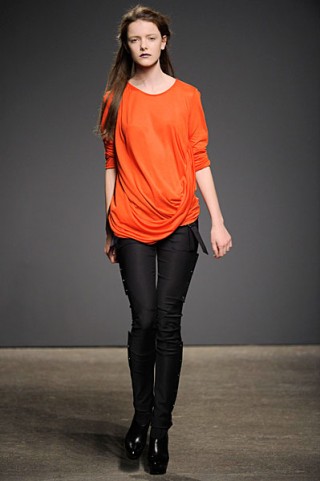 Karl Lagerfeld
He does so well at Chanel. The real question—and we know this is a sensitive subject—is why can’t Karl Lagerfeld design his own line half as well as he does for Chanel? Well, he’s probably not even designing it. With so many collections to churn out every year, it’s hardly unrealistic. Shiny, skinny, future fashion, bitch Barbies: no thank you. It’s as though this line has been made for women based upon the way Lagerfeld dresses himself, the interior design of his spaceship apartment, and all the house music he has on his zillion iPods. One saving grace is that this makes the collection funny. He’s a genius, so we expect better, and it’s a shame to see him make both lists. 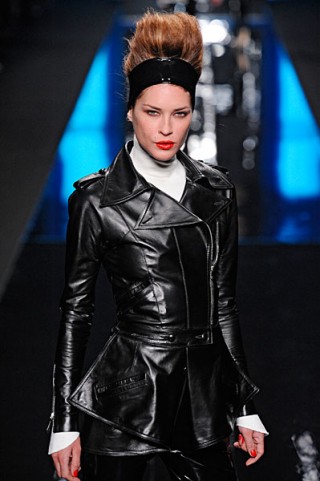 House of Holland
It’s strange that this is optional for critique on an international scale. Might we also review K-Mart clothes? They’re probably more relevant and street-chic than the latest Diet Chola offering from House of Holland. Who is this edgeless girl? Drop that pink bandana and take that ridiculous thing out of your hair! Are you on methadone? Are you asleep? What are you doing? 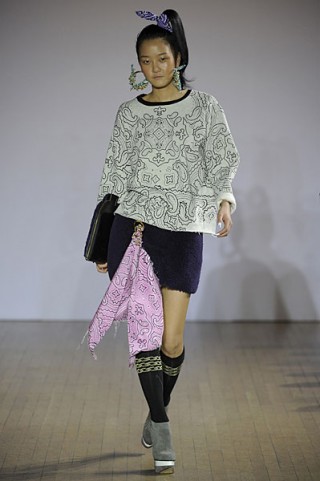 Frankie Morello
A lesson for any designer trying to come off as “edgy” or “rock ‘n’ roll”: YOU AREN’T. Guess Jeans is more punk than this desperate nightmare. This is as emblematic of unoriginality as any creative professional could ever fear for. Get thee away from us! 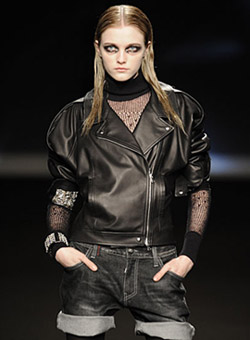