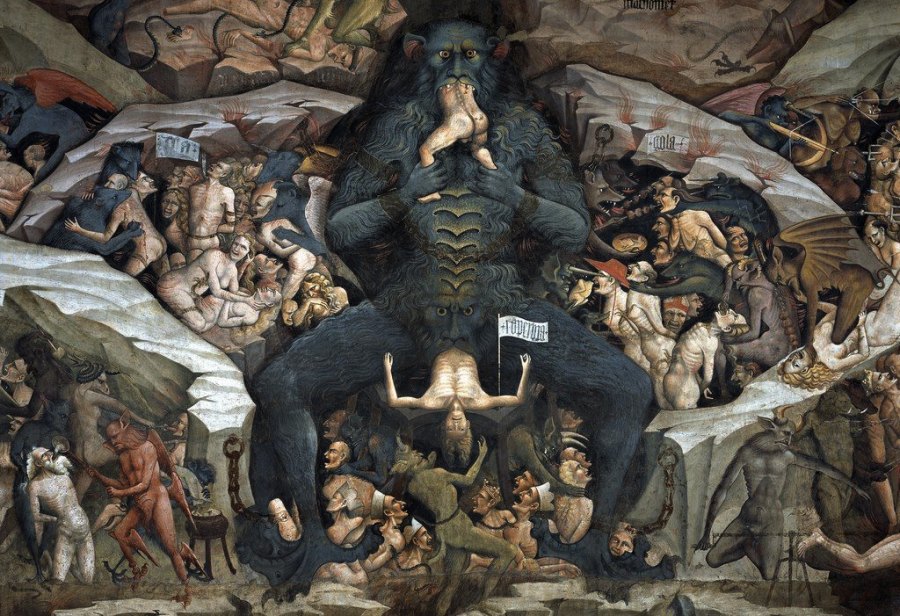 A fresco in the church of San Petronio in Bologna, dated 1410, depicts Satan in a fashion quite characteristic of the imaginary of the Middle Ages. The Devil is a gigantic beast devouring human souls. At the same time he is giving birth to them through a second mouth-vagina between his legs, in a circular damnation and movement of ingestion-defecation-rebirth which reminds of the uncanny symmetry of the bicephalous Roman god Janus.

In fact, this image of Satan absorbs what the church wanted to condemn and politically control: not just the pagan background of Europe, but specifically the rural and aboriginal faith in the circularity of nature and the self-regeneration of the whole countryside (that is the regeneration of the means of production themselves). The idea of the eternal return of life – with no divine intervention, no Genesis and no Apocalypse, but rather an alchemic and gastronomic cycle of digestion and regeneration – had to be excommunicated and personified in the pansexual body of a cannibalistic Satan.

A few centuries later the Brazilian poet Oswald de Andrade revived a similar image of cannibalism and turned it into his Manifesto antropófago — the founding text of Brazilian art modernism and subsequent movements opposing European colonization. Both De Andrade and the carnal imagineries of the Middle Ages are digested by the Manifesto of Urban Cannibalism.

The Manifesto, however, also condenses a multitude of other contemporary intuitions: an instinctive rejection of the new political correctness of urban ecology, the petty bourgeois ideology of urban gardens, the self-imposed siege of sustainable development, peak oil catastrophism and many other current machines of biopolitical control.

The Manifesto, for sure, still breathes a strong and vivid materialism. Yet it refuses predicticable binaries: namely, good horizontalism vs bad verticalism, molecular revolution vs big apparatuses of capture. As Negarestani has pointed out in Cyclonopedia, any form of religion and politics that expresses and promotes horizontality is in fact the easiest to control and exploit by vertical structures of power. Any polytheism of nature will always be an easy prey of the monotheism of Nature.

1. Stanza of the exodus from without

We should never abandon the city
in favour of a virgin territory.
There is no innocent state of nature to defend:
cities are flourishing ecosystems in themselves,
a true ‘human participation in nature’.1
In fact, nature builds no idea of nature.
The image of nature has always been
an artefact of human civilisation,
the iron mask of its stage of evolution.
Yet we remain unaware:
the image of nature is still the projection
of our animal instincts and fears
on the surrounding environment.
Any utopia of nature will always be
— the territorial gesture of a form of life.
From the most ancient of times,
from Neolithic and even Paleolithic times,
it is the town that invents agriculture.2
If in the colonial age,
‘Europe was beginning to devour, to digest the world’,3
urban cannibalism is the nemesis
of late capitalism.

2. Stanza of the inorganic life

Urban cannibalism emerges
from the biomorphic unconscious of the metropolis.
Innervated by flows of energy and matter,
the urban landscape is alive.
Hydraulic forces ebb and surge
through a tangled skein of canals and sewers,
flowing water the main metabolism of the city.
But also buildings are liquid strata of minerals
— just very slow.
It was eight thousand years ago:
the city was born as the exoskeleton of the human,
as the external concretion of our inner bones
to protect the commerce of bodies
in and out its walls.4
As our bones absorb calcium from rocks,
the inorganic shell of the city is but part
of a deeper geological metabolism.
Fossils crushed and concealed
within building’s bricks,
organic memories of prediluvian beings
petrified in the modern maze of concrete.

3. Stanza of the organic bunkers

Weed, beasts, insects, birds,
and legions of organisms unseen:
the most promiscuous republic ever declared
was here in the urbanic air.
Even plague and pox were never passive folks:
invisible architects, they redesigned streets and houses,
shaping also our institutions, the form of hospitals and prisons.5
Any wall is populated and consumed
by the invisible food chains of microbes and mould,
where the border between organic and inorganic life blurs.
Buildings breathe and ferment
— architecture is the bunker of life.

4. Stanza of the telluric insurgency

Urban cannibalism is the art of overgrowth.
There are no interstices and no in-betweens,
everything grows — against everything else.
Like at the time of the French revolution,
we are a Third Estate in revolt against the old regime,
— a third landscape in revolt against the Great Landscape.6
We express neither power
nor naked submission to power,
but the common potentia of the soil
— a telluric insurgency.
Remember the siege of the Paris Commune,
when communards ate the animals of the zoo
and so engaged in a rebellious and joyful
expansion of the edible.
‘It was because we never had grammars,
nor collections of old plants.
And we never knew what urban,
suburban, frontier and continental were’.7
The reversal of frontiers into life
— the city devouring itself.

5. Stanza of the ternary dance

Urban cannibals,
do not recognise the Parliament of Things
nor the functionaries of binary ecologies
that cut the city into piecemeal abstractions!8
Life is a ternary movement far from equilibrium.
‘We parasite each other and live among parasites’.9
We inhabit the perennial genesis:
— natura naturans,
the never-ending chain of organisms devouring one other
right down to the invisible ones:
‘The fruit spoils, the milk sours,
the wine turns into vinegar, the vegetables rot…
Everything ferments,
everything rots,
everything changes’.10
Microorganisms take our dead body back to the soil
— putrefaction is still life.

6. Stanza of the alliance with the parasite

We renew the alliance with the kingdom of parasites
that made humanity win the first wars
against invisible enemies.
Yeast was the divine agent
that made the miracle of turning water into wine
— and gave us the New Life.
‘Beer, wine, and bread,
foods of fermentation, of bubbling, foods of decay,
appeared as safeguards against death…
These were our first great victories over parasites,
our rivals…
From the Olympians to the Last Supper,
we have celebrated the victory to which we owe our life,
the eternity of phylogenesis,
and we celebrated it in its natural spot,
— the table’.

7. Stanza of life as incorporation

‘To feed is the most basic verb,
the most fundamental, the most rooted.
It expresses the primordial activity,
the primary, basic function,
the act ‘I’ engage in even before I am born
and begin breathing.
Because of it I belong to the earth forever.
Like the smallest animal crawling in the dirt,
like the smallest plant,
I began
— by feeding myself’.12
It was not by a game of genetic roulette,
but with an act of pure cannibalism
that evolution commenced:
smaller cells engulfed by bigger cells,
old species in the warm belly of new ones.13
Life was born to this world out of friendly ingestion.
*
All the life of the spirit, from poetry to philosophy,
brings trace of this remote incident,
of this ancestral endo-symbiosis.
Inspiration is always incorporation.
‘All enjoyment, all taking in and assimilation,
is eating…
All spiritual pleasure can be expressed through eating.
In friendship, one really eats of the friend,
or feeds on him…
— and, at a commemorative dinner for a friend,
enjoying, with bold, supersensual imagination,
his flesh in every bite,
and his blood in every gulp’.14

8. Stanza of the mouth eating the eye

Eating the ‘I’ — Eating the eye.
Incorporation and not sensation
is the vehicle of our experience of the world.
For ancient people,
the spirit was just the breath
blowing through the mouth.
And Homo sapiens was the human with savour,
the human with sophisticated palate.15
And all science was secretly so
a branch of gastronomia
— the art of governing the stomach.
From the roof of the mouth,
western civilisation grew even further
and extended from the eye and the gaze alone,
and the eye became the archetype of all arts,
and imposed its empire for centuries…
*
Psychoanalysis still today
professes the voyeurism of the mind
with all its family dramas, natures mortes,
and political spectres…
No, the unconscious is not a theatre…
— but the big mouth!
Happy is the one who knows
that all taboos and traumas can be cannibalised!
Desire is a devouring, digesting, defecating, digesting, devouring machine.
‘Cannibalism alone unites us.
Socially. Economically. Philosophically…
The spirit refuses to conceive a language without a body.
Need for the cannibalistic vaccine… against meridian religions.
And against outside inquisitions… Cannibalism.
The permanent transformation of the Taboo into a totem…
Down with the vegetable elites.
— in communication with the soil’!

15 The Latin word sapiens derives from sapor, that means ‘taste’, and this from sapa that means ‘juice’.
16 Oswald De Andrade, Manifesto Antropófago, 1928.

The matter of the world is endlessly cooked and devoured
— the stomach is the big
outside us.
The fire of stars has been eternally forging atoms:
the inner cosmography of the human rotating
around the fire of the eternal digestion.17
‘If I have any taste, it is hardly
For anything but earth and stones
Let’s eat air,
Rock, coal, iron
The stones a beggar breaks,
The old stones of churches…’18
Ivre de terre!
Drunk of earth!

10. Stanza of the smell of centuries

Breathing again the ‘smell of the centuries’,
in the stench of battlefield trenches
and along the countrysides of starvation,
and under the camouflages of Carnival.
Any cook still wears the mask of death.
The history of gastronomy is in fact
the forgotten past of deadly dearth.19
Recipes recorded the overlooked cartographies
of empires at war, the trails of migratory encounters
and the stratifications of barbarian invasions.
Culinary art
arose from the inventiveness of the ‘poor’
against the matricidal nature
— and never from pauperism.

11. Stanza of the self-imposed siege

In the Middle Ages it was fear
to allot allotments inside fortified walls
for growing food during assaults.
Today new forces attempted
to siege the city — but from within.
Today it is the time of sustainable gardens
to reincarnate the new spectres of siege
— and the ‘moral equivalent’ of war.
The pacified horizon of sustainability
manifests like a wartime without war,
the hostility of a silent Ghost Army.
The patriotic war for surplus has indeed moved
its home front to the inner front.
The patriotic war is now the war on surplus:
on the individual calculation of energy, water, proteins,
and any social appetite.
As there is no longer an outside,
within the ideology of degrowth
we have established the borders
of our own siege.
Urban cannibals
— eat the rich!

Matteo Pasquinelli will be speaking at the Ultimate Capital is the Sun Symposium on the 26th of October, 2014 in Berlin.

Wietske Maas is an artist based in Amsterdam. In 2007, she started developing with Matteo Pasquinelli a project called urbanibalism. Urbanibalism explores the city as a complex site of digestions between humans, other life forms and non-organic matter.