Styles and Customs in the Twenty-Teens

The last decade, which shall be referred to henceforth as “the zeroes”, saw such phenomena emerge as social networking web realities, every model as a "supermodel" regardless of impact, and a violent tabloid culture. There were innumerable sociological changes and an equal amount of non-events, but those are fodder for another article—one you can be sure you won’t see on this website. Our eyes look toward the future, through the “tweens” (at present) and beyond: to the “teens”!

For humanity, gender bending will extend down generationally, all the way to the unborn. Gender for infants will be predetermined and hormone treatments will become standard treatment for children who reject their pre-natal assignments. Trannies will subsequently grow in numbers and be afforded a great deal of respect—especially transgendered pop stars, once the “bisexual” trend in pop music comes to a close. Homophobia will relocate: society-at-large will entirely accept gays and lesbians, while trans people will become wickedly anti-gay to a murderous degree.

Naturally, there will be no distinction between male and female toilets. This will feel quite progressive at first, a triumph for society! However, subversive activities will result and draw criticism—namely female trolling. Heterosexual cruising will become an epidemic, and governments will have no choice but to revert to selling condoms in public restrooms: a practice which should have never ceased to begin with.

Clearly, the current trend of heterosexual promiscuity will continue to accelerate in direct proportion to the rise in gay monogamy. A new sexually transmitted virus will emerge and come to be referred to as “the straight disease” by gay pundits. “Republican sex” (formerly known as “the missionary position”) will become a popular term and it will be considered the most risqué, dirty sex a pervert could ever have.

This boom in heterosexual sex will of course lead to increased population issues and races will continue to blur. “Beige” will simply come to define the prominent global race as a PC term. Our human race will continue to evolve toward resembling the screen actress, Jessica Alba. [Editor’s note: Jessica Alba IS the “5th Element”.]

Homosexuals, increasingly possessed by their fixation on “the family unit” will be fiending for children. These will be primarily farmed in third world nations, such as Canada. Baby trade will sustain Canada’s frail economy and become the nation’s most valuable export since the punkette chanteuse, Avril Lavigne. 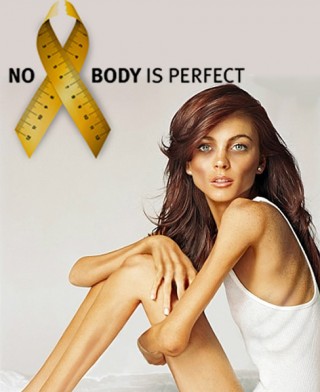 Speaking of farming: animal farming will soon reel from unfathomable scandal and animals will develop severe eating disorders, such as anorexia nervosa and bulimia. Animal obesity will also become a chronic issue. Domesticated family pets will deal with these same emotional eating issues due to the simple truth that these diseases are psychologically contagious and animals are psychic. There will be no escape from this affliction. Humans will be so horrified by the trauma of our pets (combined with insecurity brought on by the media) that we will be hardly eating at all.

Luckily, Ambien will become America’s drug of choice. “What does this have to do with eating disorders?” you ask. Researchers will “discover” something they may already know: that the miracle drug Ambien cures both sleeplessness and eating disorders alike. Ambien will be found to cure most things and be considered “the new marijuana”. 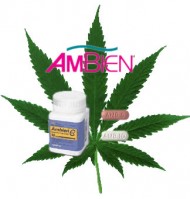 There will also be a new drug in vogue, which over-sensitizes the taker. All of our senses will become enhanced and we will be able to achieve more acute eyesight, stronger senses of smell, taste, and hearing while high as a kite on this trendy new pill. It will, of course, be a deceptive re-branding of a drug that enhances one’s eyelashes, already available on the market today. The new drug will be marked up, reasonably, to thrice the price.

Since you’ve just wondered it aloud, the answer is yes: doctors will be working on a pill that can change your race, but it won’t be ready until the 2020s.

It goes without saying that there will finally be a cure for baldness. Following the twenty-teens, nobody will ever suffer male pattern baldness again (unless styled to look so on purpose)! This look, at long last, will take off as an ironic fashion trend. 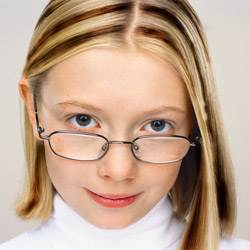 Life as a teenager, while rife with the same level of angst as ever, will have new, unprecedented pressures. Foremost, teenagers will have higher expectations than ever for the quality and flavor of their food, and high school cafeterias will become gourmet molecular gastronomy labs. ABC television is going to be all over it, and it might be prescient of you to already start holding them accountable (along with that seductress, Michelle Obama).

Bored with easily consumable information, teens will play advanced-level societal prediction games–like fantasy football–only with online analytics engines producing inconceivable streams of data. Teenage gang violence will transition to the web, where gangs will troll the virtual realm seeking out and causing disorder. Rather than bomb threats, youths will begin to phone (or, more likely, text) fake bio-terrorist threats to their schools in order to have them shut down on the dates of final exams. Ironically, testing in schools will have greater impact and collective data relevance than ever, due to unprecedented attendance: teens will be required to provide a reality-show style confessional at the end of each examination… and they’re going to LOVE IT.

Testing will easily replace teaching in high schools, with teaching only occurring when questions on tests are answered incorrectly. Dropout levels will decrease with more students graduating early and attending college at a younger age due to this new, efficient educational style.

On a critical sidenote: Oprah’s African school system will be sought after for admission worldwide and the process will be extremely competitive and corrupted by financial politics. Oprah’s signature combination of insightful education and hands-on real life adventures across the Saharan continent will be just too appealing for prospective tweens to handle. 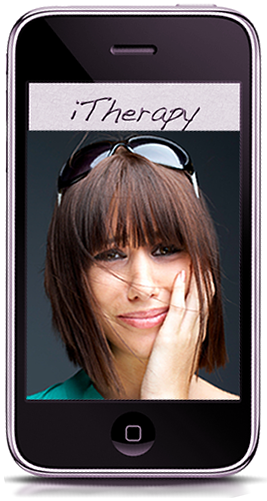 In the next decade, massages will replace exercise completely. Yoga will become a common practice during sleep, thanks to a trendy new workout craze combining yoga and hypnotism. Therapy, psychic readings, psychotherapy, and other methods for improving psychological well-being will be downloadable and available as apps: iTherapy, iSight, iPsycho, and iProblems will contribute to the coining of the term “Generation i”. The twenty-teens will indeed come to be known in no certain terms as the iDecade.

Plastic surgery will soon be free, though qualifications will need to pre-exist, such as ugliness. The government will sponsor such programs because people will feel sorry for bad faces and want to cure themselves from having to view them. This legislation will have an unsurprisingly easy time passing through Congress.

Reality television shows will become even more accessible. Everybody will have one, like a social networking profile. You will soon be able to buy them, download them, watch them, quit them, start new ones, skype into them, direct them, and most importantly, curate them, as everything will be curated—including but not limited to: sandwiches, subway rides, salads, spoken sentences, and text messages.

The concept of celebrity will disintegrate totally and now being famous will be obsolete. There will be no superstars, only regular citizens soaking in the world’s attention, famous for doing nothing extraordinary. Whomever has the most eyes on their Twitter will be considered a celebrity.

Twitter itself will take things a bit further, updating on a continuous psychological stream all day through spoken words (and sometimes, rapid eye movements), allowing everybody to follow everybody, uncensored, all day long. “Following” in the next decade, will be more akin to what is now considered to be “stalking”, although no one will be afraid nor fear for their privacy, because “privacy” will be an outdated and rarely employed term.

Needless to say, we will all have unharnessed access to one another’s personal information, including bank account balances and health records, via Google.

Fashion will cease to create anything new. The zeroes only saw re-appropriation of past achievements, references without context, and easy fashion. The consequence will be obliteration of creative fashion and a continued striving to be unremarkable and status quo.

“Whole Clothes”, a lifestyle brand by Whole Foods, will come to dominate the retail sphere. Clothes will be biodegradable, like food… or manure. These perishable, “green clothes” will be very expensive and therefore oppressive. Obviously, if you can’t afford these fashions, you will be exported to Canada, where meat clothes are worn (often fashioned out of the citizens’ deceased, anorexic horses and saint bernards).

So you see, vegetarian fashion, much like vegetarian dieting, will be quite militant and irrational, and have as little regard for human life as the current fashion establishment. The industry’s president, former Hollywood “fashionista” Natalie Portman, will become a cult figure: feared as commonly as she will be mocked. 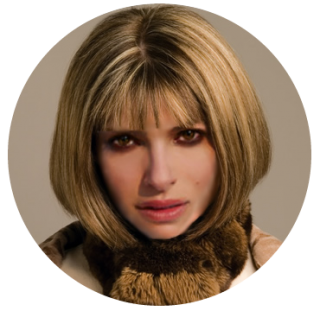 The death of Ms. Portman’s competitive vegan-fashion foe, Pamela Anderson, will devastate the nation and be considered the final nail in the celebrity coffin. A new calendar will grow to social prominence (B.P. and S.P.: before Pam and since Pam). 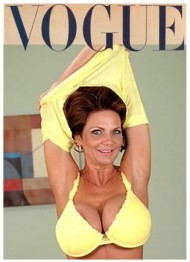 Mixed-age relationships will be on the rise, as senior citizens continue to prolong and postpone their deaths.

Branching out will become big for corporations, with many moving on to government and unapologetic colonialism. For example, McDonald’s will own an island (and later, in the following decade, become a nation-state). Perhaps it already does and its self-governance will leak to the media during this decade. Many indigenous peoples will succumb to the American cuisine chain, populating its many McNational facilities, where they will work for unfair wages, but with free nationwide health care. The most impact this will have upon culture in America will be the phenomenon of the “McDonald’s accent”. This form of English conversational dialect will swiftly find a niche in hip hop lyrics and also internet chat script.

Starbucks will be as popular as ever, expanding into health care and pharmaceuticals, developing into a Duane-Read-ean drugstore chain. They’ll offer Starbucks dental products like mint mocha-flavored fluoride toothpaste and a variety of Starbucks toothbrushes. They’re going to become really concerned about teeth whitening. In fact, Starbucks will release a new formula for coffee that whitens teeth, but it will not only fail in the marketplace due to a mishandled ad campaign, but also because it will undoubtedly cause cancer.

In the 20TEENS, everybody will have platforms: digital, broadcast, and web—everything except print—will belong to everyone. The world will also wear platforms. PLATFORM SHOES AND SANDALS FOR ALL! 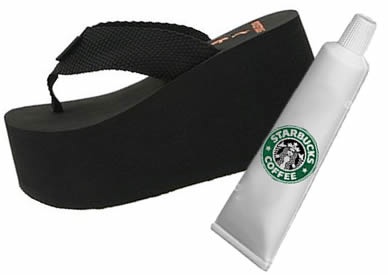