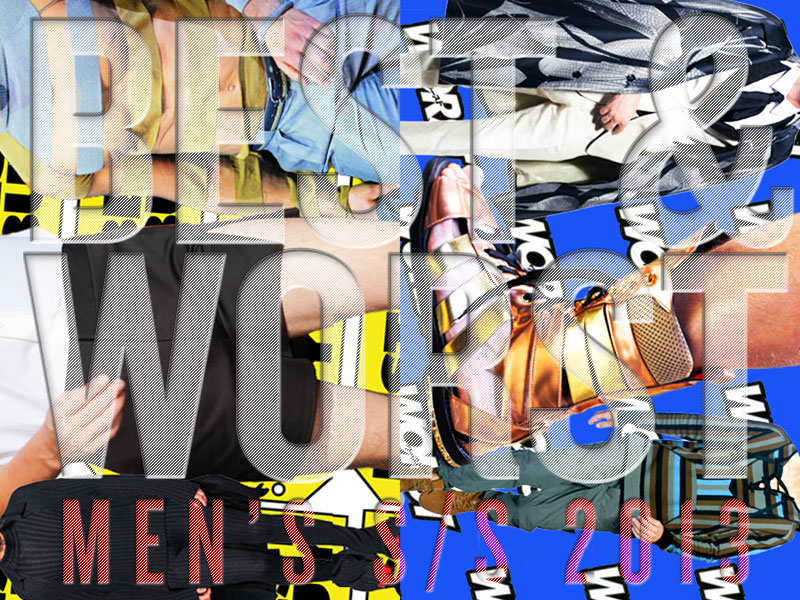 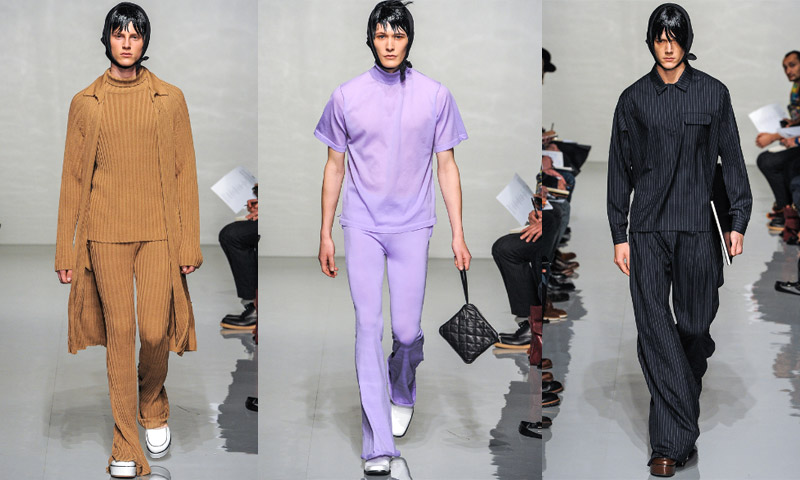 J.W. Anderson
Do you know how few men can pull off dragging, ribbed, flared pants with matching sweater sets? Who cares? J.W. Anderson’s Spring 2013 collection is a classic best/worst situation. Debate all you want (and we did) about how unwearable this may be; coming from one of the most talked-about new designers, this collection is like a bitch slap to Barneys. Without a thread of commercial viability, this collection has serious recall faculty. Who isn’t gagging over the thick poly blends, extra-wide-ribbed knits, cutaway sweaters (the asymmetrical crop top), mock necks, cowl necks, red-bottoms for men, and pinstripe wide-leg pants so long you have to wear platforms?

Yes, this is menswear… and it’s the new normal. 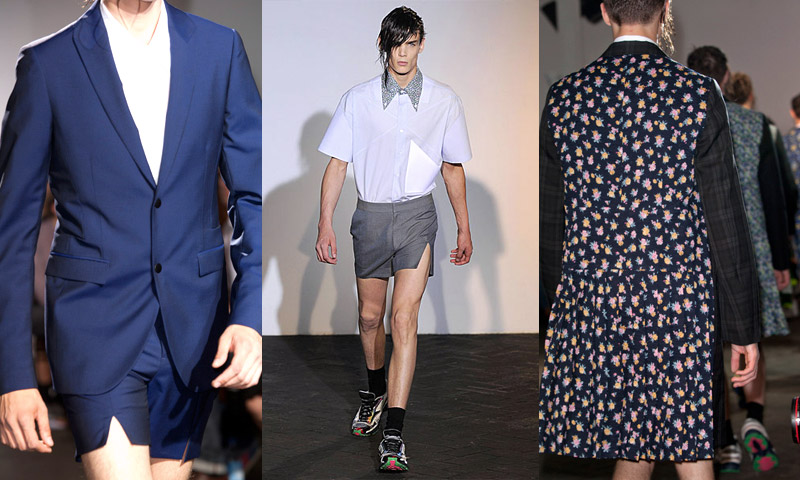 Raf Simons
Another casually “trans” collection, Raf transmutes his Jil Sander days into a feminized collection with an immodest austerity. There are big, long, pointy-collared shirts, Dior-Homme-circa-Hedi-Slimane hair looks, and halfer hybrids: suited up in the front, flowing floral in the back. Most importantly, the It Summer 2013 bottoms are here, and you can squat in them. Raf’s shorts are for the working ladyboy who needs the constant knowledge that they are challenging the sexuality of every man, woman, and child with a couple small inches of freedom. Inspired by the Jolie-Pitt Slit, Raf tries every possible slitted dress short variety for extra legginess, and each is better than the last. 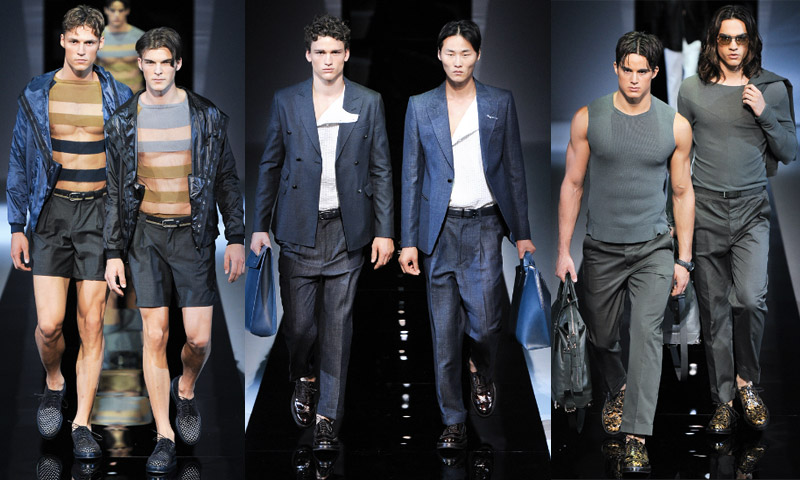 Emporio Armani
The Emporio Euro-psycho takes a vacation from Wall Street to St. Barth’s, where he imbibes too much cocaine, passes out on a chaise lounge, and wakes up missing his shirt. It’s so realistic: luxury daytime-drinking date-rapewear. Armani has created the perfect pec-exposing shirts for spring, a true innovation in a moment where nothing is new. Please take a moment to absorb how everything good comes in twos. Why do no other designers realize the impact of multiplicity? 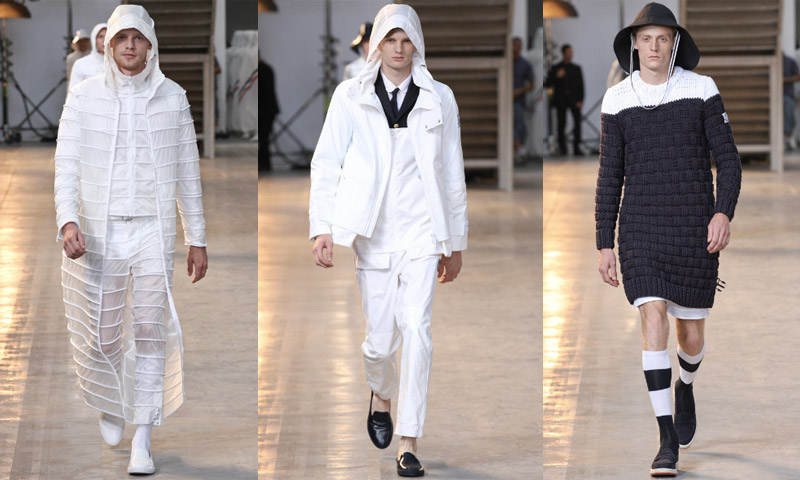 Moncler Gamme Bleu
Guess the sport. Safari pajama hunting? South African synchronized skydiving? Gay wedding Olympics in the Arctic Circle? Shuffle these looks in with those of every other season of Moncler Gamme Bleu and they could become chronologically indecipherable (those sporty, puffy weirdos), but there are still a lot of cool pieces here. And the brand’s general aesthetic throughline of making extremely utilitarian outerwear into conceptual preppy fashion is still exciting when you dissect it piece by piece. If only the color schemes would change every once in awhile. 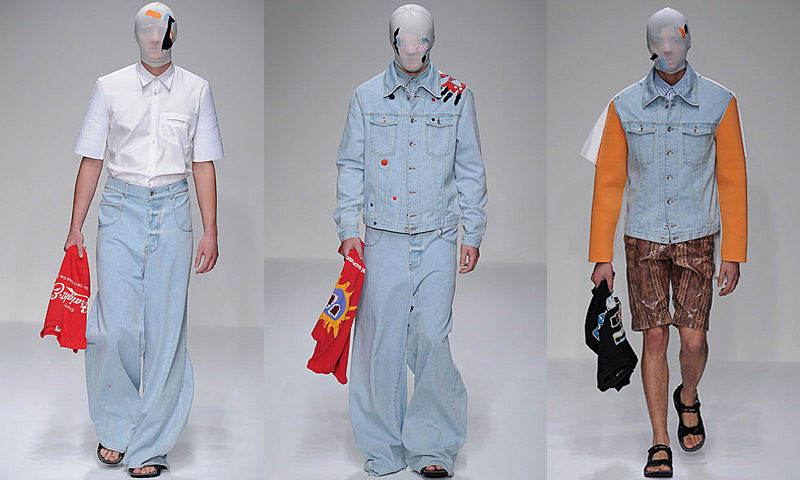 Martine Rose
Watch out Thom Browne: first J.W. and now Martine? DRAGging is in. Martine Rose’s floor-sweeping jeans are reminiscent of the pseudo-sk8r poseur movement so beloved by ‘90s middle schoolers. With legs wider than the waist, Martine is seriously trying to piss off her parents. She may have traded crumpled t-shirts for chain wallets, face masks for beanies, and Tevas for Vans, but this girl is definitely stoned. That head-to-toe denim is giving us a semi in our Silvertabs. But Martine doesn’t stop there; she gives us shiny faux-python trousers, neoprene sleeves on dress shirts, handprints burned into knitwear, and the new IT accessory—t-shirts safety pinned to your back. 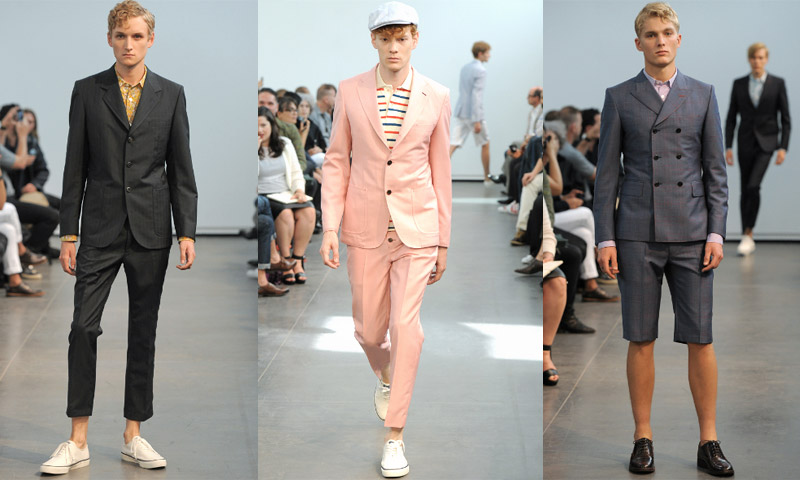 Junya Watanabe
Repeat offender! Season after season Junya loses his way further and further into the butthole of some Williamsburg condo-renting, mousse-applying hair queen who wishes he could afford a Hamptons share but would rather buy shitty, outdoor-inspired Junya Watanabe clothes to wear at his backyard barbeque where his friend’s band is probably playing (“They’re big in Europe”). Even though he wears them, Thom Browne doesn’t even make highwater suits anymore! This archetype not only has a wispy, old-timey moustache—and probably keeps organic grains in mason jars—but he thinks skateboarding in a shrunken suit is the look, and he’ll probably get married in a pale salmon poly-cotton suit that doesn’t wrinkle (look 42). Question: Why did Tim Blanks called this collection “sweetly urban”!? Answer: because it’s sherbet-colored, and—like all things urban—so not worth the price, it’s insulting. 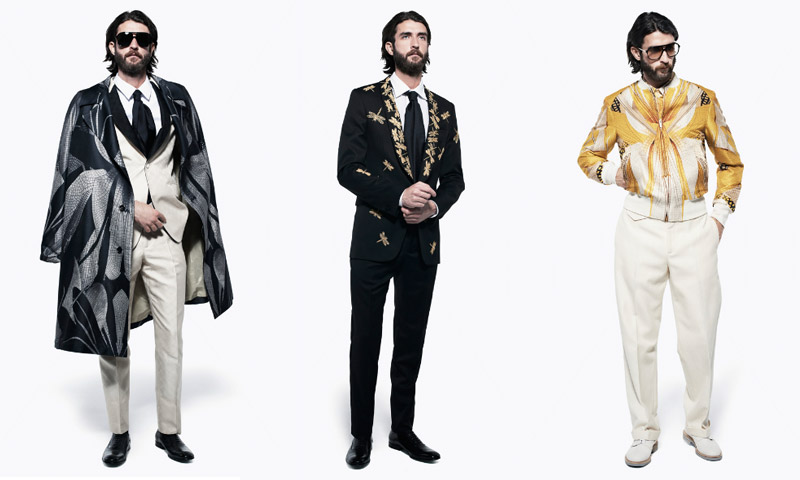 Alexander McQueen
Why did McQueen decide menswear isn’t a “thing” anymore? Not only wasn’t there a show, but it looks like the parties in charge rented out the entire Men’s Wearhouse archive. Guaranteed. Does the identity of the McQueen man rest entirely on the hope of a bilaterally symmetrical digital print? How is this inspired by Marc Bolan, as the notes suggest? Do designers reference Bolan or David Bowie because they think they’re evergreen pacifiers for culture snobs? We weren’t born yesterday. McQueen must either scout some new blood for these divisions of the company or turn fully bridal, since that’s where all the money comes in. Nantucket nuptials with closeted Gaga fans and Philip Treacy veils? ☑Declines with no regrets. 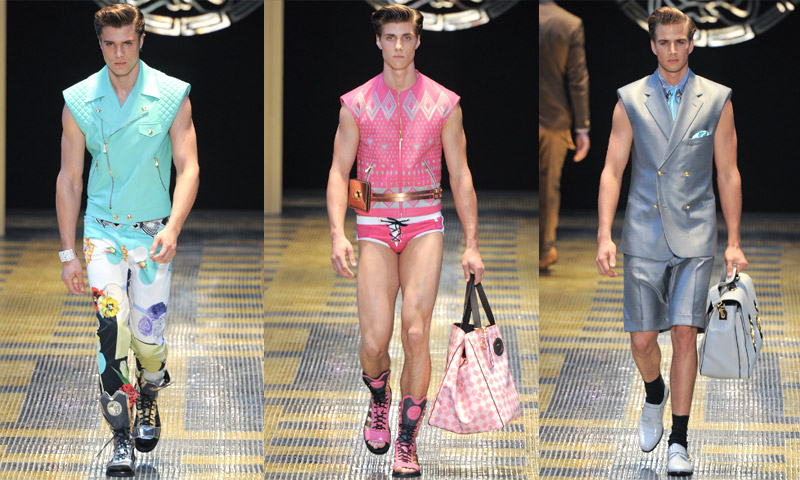 Versace
The cheapness of this collection is spellbinding. Those shimmery dollar store ties? Want one! It’s all very discount, like knock-off stuff one finds on Broadway in stretch pleather that only comes in women’s size 14. That’s hot… but still, what is Donatella trying to make happen? According to the program notes, she’s inspired by Halloween costumes that are inspired by the tragic later years of Studio 54, when it should have closed but kept going—beefy, shirtless guys and cocaine galore. Mind you, it’s not Emporio cocaine (see above). It’s more like the night Vanilla Ice did poppers for the first time and knew a spiral was forming. In 140 characters or less: Donatella premieres pink, open-toed, gladiator, boxing high-tops! O.M.FUCK! 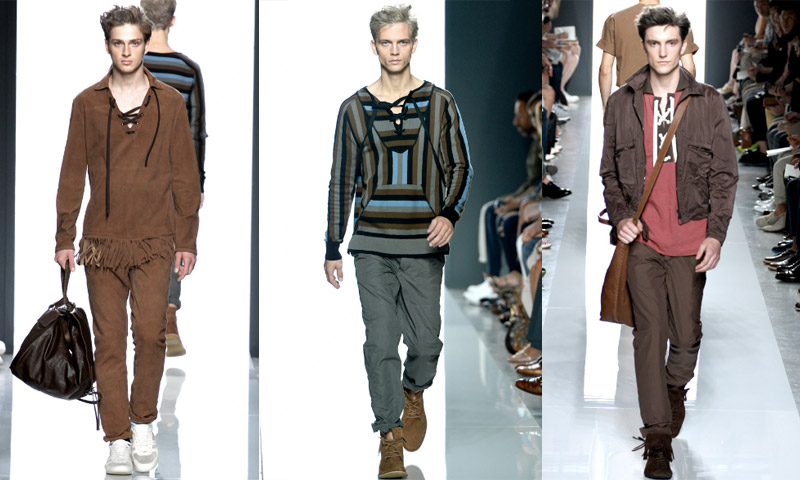 Bottega Veneta
Gay, straight, butch, femme—this collection is for no one. What’s the matter, Tomas Maier, still traumatized from when mutter forgot to sew your costume for the school play? Look, we understand, but Robin Hood minus the tights is pointless; Pirates of Penzance minus the singing is a snooze. Either stick to the shit you know—basketweaving leather—or dig a little deeper. Even “model’s own” would have been better than this smegmatic Euro-cyst on the flaccid dick that was men’s spring/summer 2013. 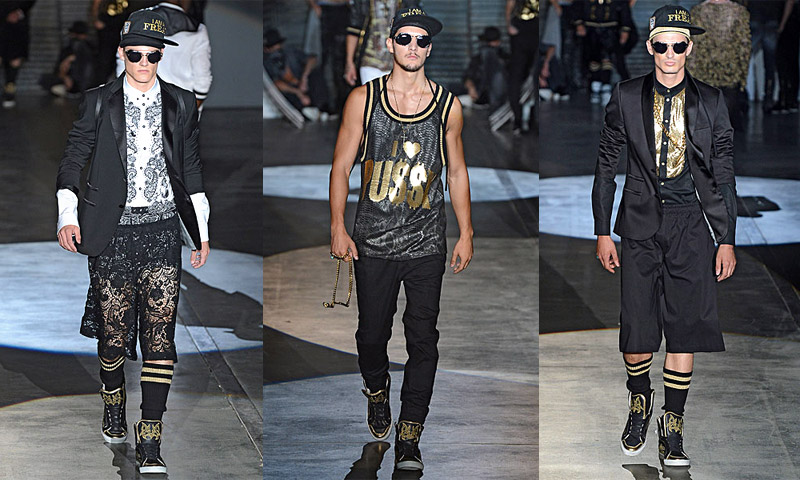 Frankie Morello
Yeah we know this house is “not a thing,” but something about the budget behind this catastrophe needs to be studied, for behold: history is repeating itself. And repeating. And repeating. There are, of course, the blatant rip-offs (Givenchy bandana prints, Balmain gold studs galore, opulent Jeremy Scott high tops complete with filigree cross motifs and gold stripey gym socks), but more importantly the overall tackiness approaches something aspirational toward London club kid and finds itself washed up on the Geordie Shore. The one liner t-shirts available on Canal Street are sheer genius compared to the “I <3 PUSSY” jersey shirt and “You’re a JERK” baseball cap. This mood board is undoubtedly a bunch of Style.com images from club kid designers over the past 6–10 seasons with highlighter circles drawn around ideas to steal, and all in an effort to create some sort of Jeremy Scott for adidas x Givenchy splice-mare that aims at enfant terriblism yet winds up representing the nadir of fashion victim desperation. It should have never made it out of the lab.