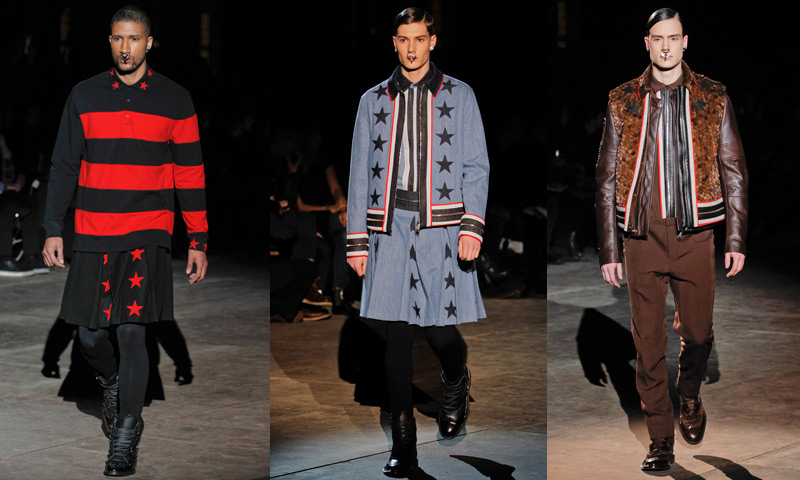 Givenchy
It’s so trendy that it’s actually good. Although it’s more of a men’s take on the last few seasons of women’s Prada, it makes us miss Miu Miu menswear, and in an ideal world, only Tisci’s man could fill those size-13, square-toed loafers. Designers nicking ideas from other designers’ recent collections is usually a bad look, but when it’s a menswear label knocking off a women’s collection, it’s actually respectable. In fact, we wholeheartedly approve. And we’re absolutely Minotaur-ded for the bullring-style septum jewelry. 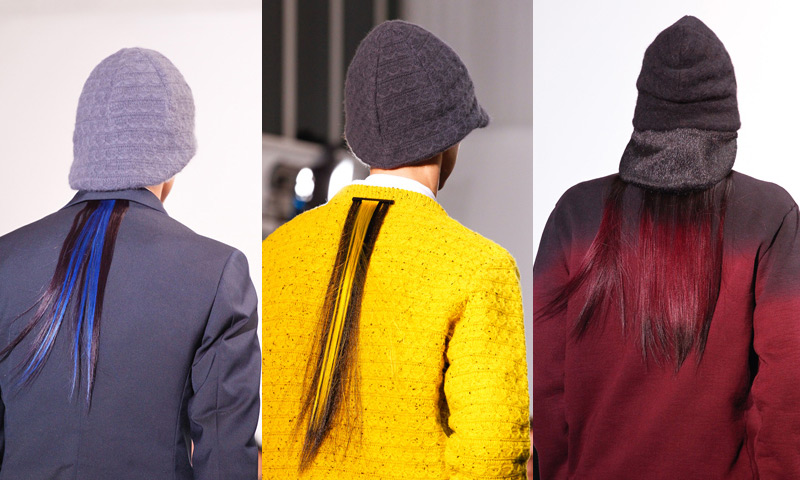 Raf Simons
These rave boys are so clueless they wear shorts for fall, fun fur so shiny it sparkles, beanies so loose and shapeless that they’re basically bucket hats. They’re so lazy they pair their dingy off-brand trainers with sheer black dress socks left over from their sister’s wedding. They’re so skinny they can layer two button-down shirts and a sweater and still look concave. They’re so stoned they think it’s an awesome idea to have multi-colored hair extensions attached to their jackets. Yeah, Raf Simons’s flunked-out school boys are plain hot. 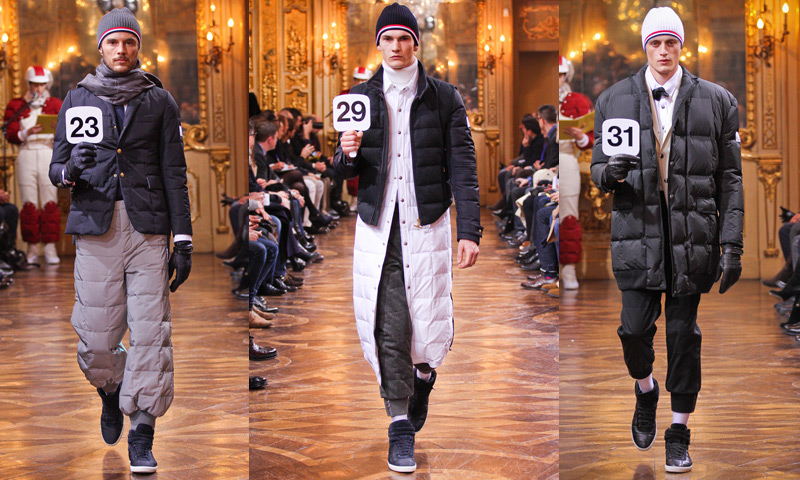 Moncler Gamme Bleu
Thom Browne’s Moncler collections confound the viewer (especially those of us who don’t know what “sports” are), until you take away the puffer filter and realize what’s really going on. Formula 1 never looked fluffier, with sponsor-patch pants and jackets, flat padded scarves, and pillow blazers poofed in singular form rather than in traditional quilting that comes with the puffer label. If he had taken the branding one step further and closer to the Nascar world this resides on a tangent with, it might have been the greatest stroke of genius ever. 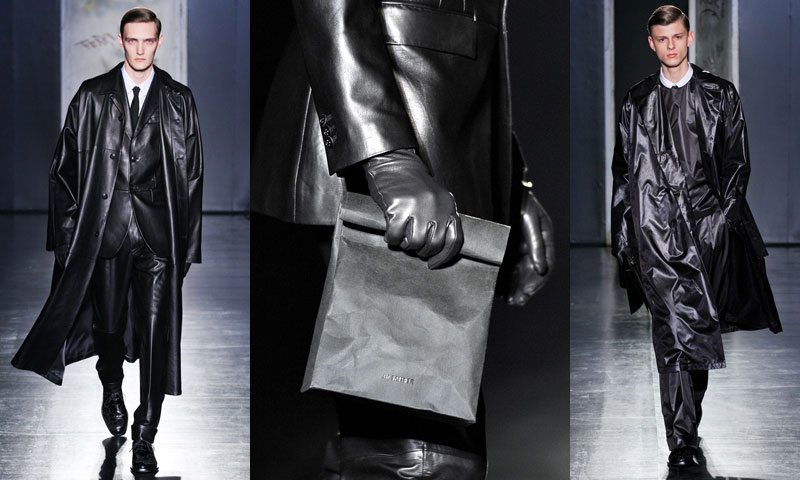 Jil Sander
For Jil Sander Raf has conjured a Netflix queue of your favorite turn-of-century blockbusters. A classic suit in black leather and a matching trench transform the business man into an American Psycho-style butcher. Have to eat at your desk? Your Office Space is the perfect place for the new it-accessory—a black paper lunch bag. Working late? Go goth sci-fi lite (“The Schmatrix”?) and break into the mainframe and take that intellectual property that is unlawfully yours. This collection takes you from closed-door corporate mergers to after-work ritualistic hacking. It’s the future of power dressing. 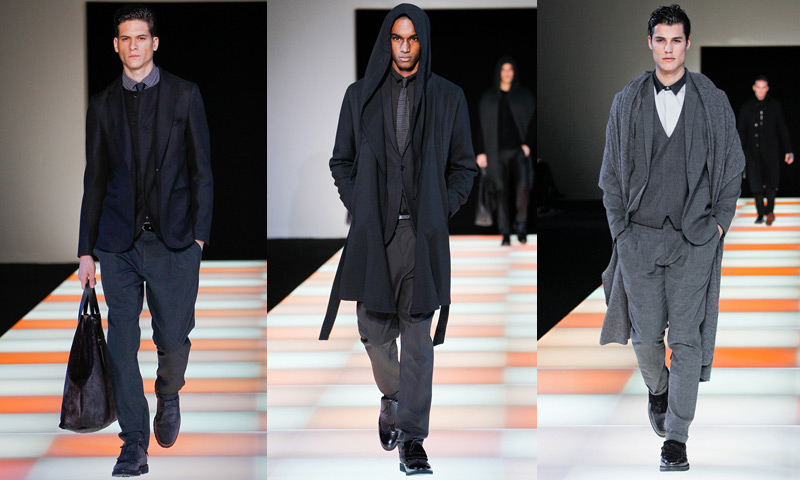 Emporio Armani
Sorry, this is looking really good about now. We’re so sick of Canal Street and the subway, we’re ready to wear full-body velvet. Everything about Emporio is too luxurious to dislike. It’s not for the 1%; it’s for the .001%, so amassed with creature comforts that they can’t even be bothered to wear real pants. Evil pajamas for a cabal of the world’s most sinister inbred lunatics—people who buy and drug people from the Internet for fun. A lot of this could easily float between the intellectual liberal syndicate of neurotics that populate the late-20th century filmography of Woody Allen, and simultaneously Robert Smith and the Cure. Even Judy Funny would be into it. Just forget all of the hats unless you are actually Alan Alda. 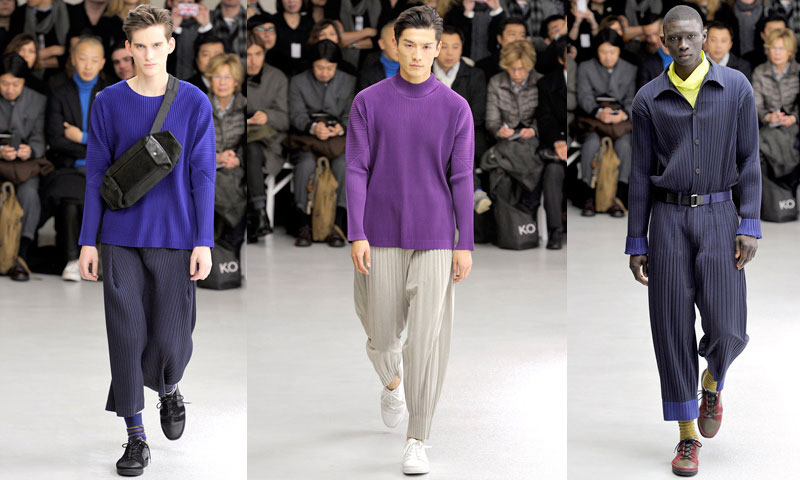 Issey Miyake
How does a Japanese house create a luxury menswear collection after the devastation of the 2011 tsunami? Circular swirl prints evoking Hokusai’s Great Wave. Fabrics wrinkled and gnarled as if they’d just been pulled from a pool of standing water and debris. Checks and plaids thrown into twisted disarray like shifting tectonic plates. And the best pant of the season: beautifully pleated and in various lengths, at once calling to mind the rolling aftershocks of the earthquake and the trembling fragility of the people left in its wake. 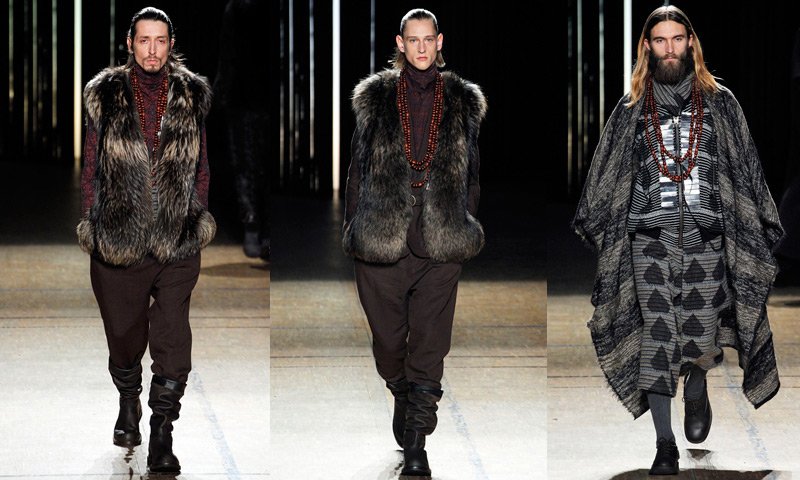 Damir Doma
Ann Demeulemeester just queefed. Damir Doma seems to have been inspired by that guy who’s been traveling alone for way too long, collecting places and acting superior to everyone he encounters. He tells unbearable stories of harrowing adventures that can never be confirmed because there are no witnesses. He practices reiki and acts like he knows what you’re thinking. He lets his beard grow when he travels just so he can show it off when he returns, shaving it once everyone has seen it. He wears beads for God’s Sake (yes, the Japanese rice wine that he’s all a sudden a connoisseur of). He’s that guy! Needless to say this collection is bound to make you uncomfortable. Even the Style.com review hints at its awfulness: “The shapes were still recognizably Doma, from the drop-crotch carrot pants to the fluttering, blouse-like tops and oversize knits.” Ouch, that hurts. 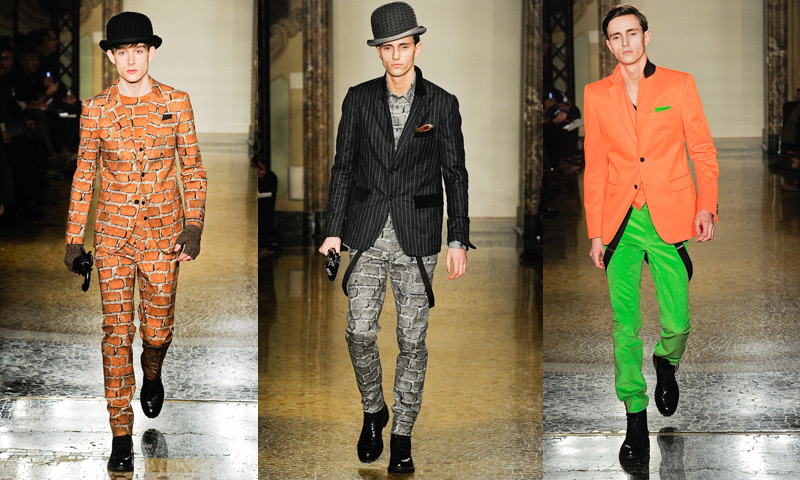 Moschino
“Saville Rock?” A horrible choice of words, but apparently that’s what Rossella Jardini and Bill Shapiro are calling their new collection for Moschino. Who wears Moschino anyway? Who is their target customer—the Target customer? Moschino is having an identity crisis, which is understandable since what made Moschino great is inextricably linked to its heyday in the ‘80s and early ’90s. Back then Moschino was fun, witty, and playfully self-aware; painfully it’s none of that now. It’s basically room-tempature tap water and dry toast. But they do try. In this collection they showed brick print on just about every garment imaginable, and they sent models out in bowler caps and suspenders. Granted, those are both classic Walter Van Beirendonck looks. We hope Moschino’s anmesia isn’t permanent; the brand is ripe for a comeback, albeit under new creative direction. 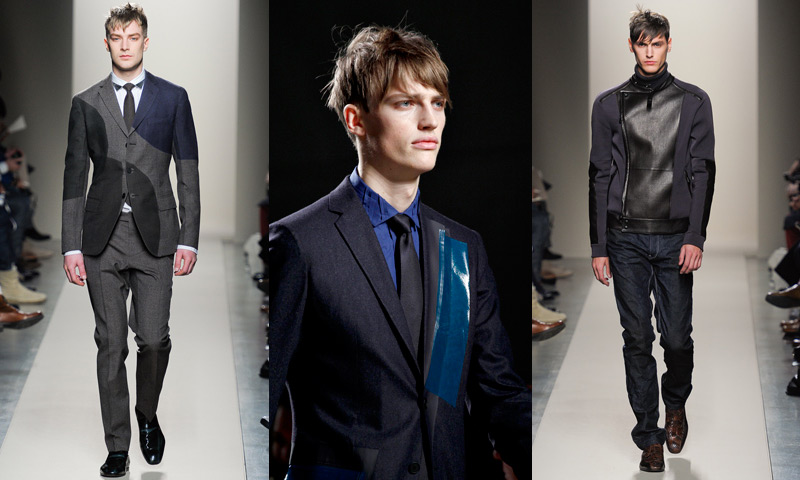 Bottega Veneta
Tomas Maier manages to take some sort of conceptual “risk,” in what might be described as a Hiroshima shadow effect of bygone CDG trends, playing with proportion that alternates between early Y2K Hives-mania and color blocking, both of which are not very forward. More obviously, Bottega writes a schmaltzy gay love letter to every bad cliché in Italian fashion: leather paneling, pointed boxy patent-crocodile loafers, Night at the Roxbury metrosexual treated denim, the works. Oh, and: “There’s not much you can do with men’s fashion,” is what Maier said to Style.com. That’s about as frank an admission of ineptitude that a menswear designer can make. 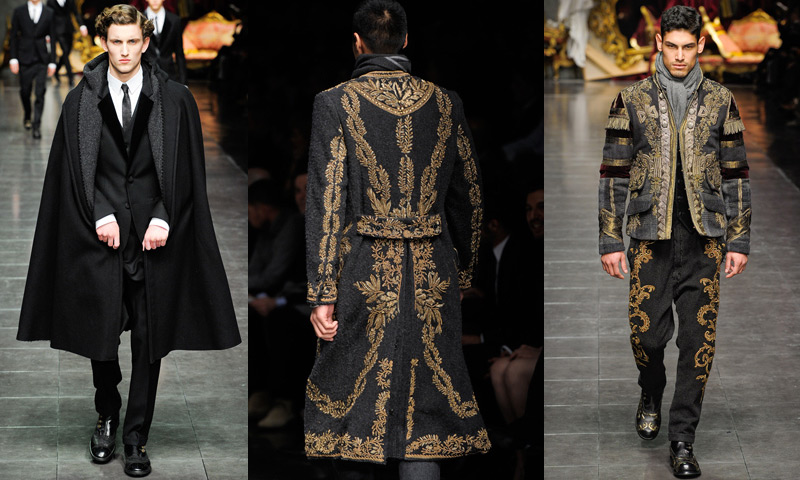 Dolce & Gabbana
Dolce & Gabbana’s heavy velvet Phantom of the Opera gilded baroque collection was so heavy-handed, costumey, and reeking of Balmain at the height of Decarnin’s madness that we wonder if it’s to be derided or if it’s ridiculous enough to be funny. Where’s Jack the Ripper when you need him? What, no jack-o-lanterns were available in Sleepy Hollow to make head pieces out of? 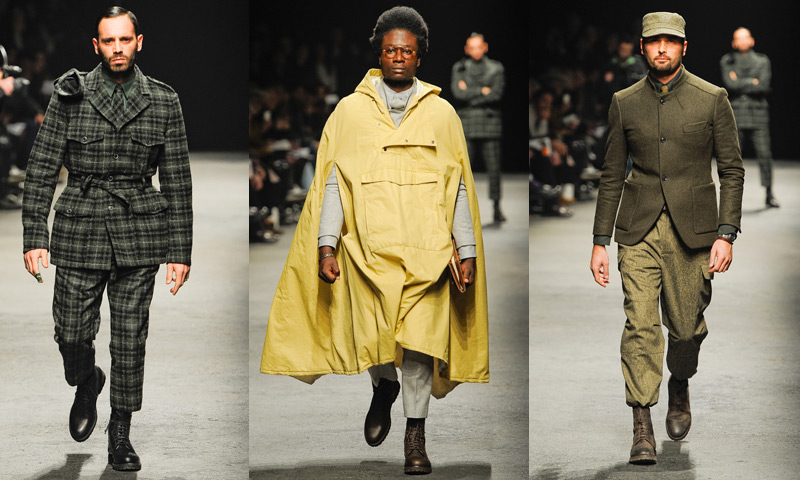 Umit Benan
Something about this feels like a sad fan fiction story starring Junya’s worst hits. Umit Benan has gotten so much buzz and what is he giving anyway? Plaid cargo pants and felt vests? An oversized poncho for a plus-sized “real person” model? Is this casting interesting? We can’t tell.