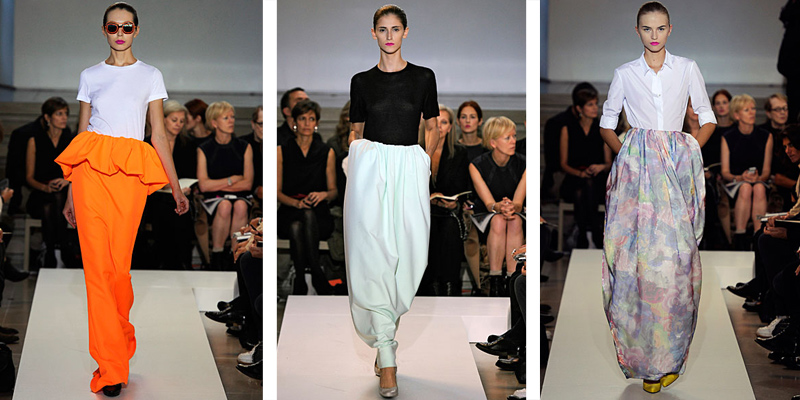 Jil Sander
In a season where long skirts were everything, Jil Sander showed the only important ones. Raf Simons managed to make full, floor-length skirts appear extremely wearable by tapering the bottom or sometimes bringing the silhouette in at the knee. There were giant pants that looked like a skirt and a skirt with pants sneakily popping out from underneath. Simons adopted a very Isaac Mizrahi philosophy of dressing down couture cuts by fusing full, sculptural shapes with casuals like t-shirts and button downs. Mizrahi is always a great starting point, but Simons went way beyond, developing this concept in a crisp, weightless manner with light synthetic textiles that provided maximal pouff. 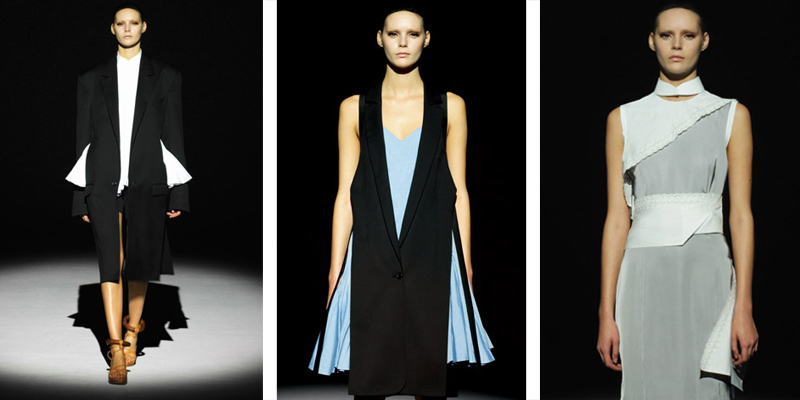 Hussein Chalayan
Chalayan’s strength, and his recent weakness, has been his conceptually heavy clothes. Yet this season Chalayan presented an exciting, concentrated collection, offering a belled silhouette that looked delightful on its own or peeking out of vests and coats. These unique dresses incorporated the most feminine shapes and textures with the most starched and clinical interpretations of menswear to create a totally new and refreshing visual. A new apron was conceived here as a 2D vest, detached from the sides and the back. It played with a flat look that contrasted with the flowing fullness beneath. As if that weren’t enough, Chalayan redesigned the classic hotel maid uniform. This sleek, new, streamlined silhouette will surely create quite a stir in the uniform industry. We suggest that it receive immediate global adoption by any hotel seeking to up its street cred. The Four Seasons, or perhaps Hilton Hotels? 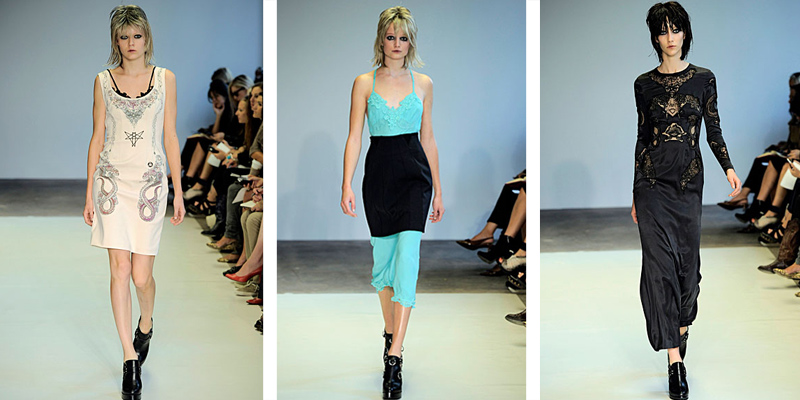 ┼M✬RiOS┼SCHW✬b┼
Although failing to inspire at Halston, Marios Schwab’s silk, lace and leather collection is a rare achievement in that it emulates and legitimizes 7th Avenue wholesale fashion aesthetics. The woman in question is clearly Russian, has an active MySpace account, and strives to look and act like Melrose Place‘s Taylor MacBride. This manipulative, mall-goth seductress is subverting notions of discount shopping, sublimating the sensibility of wholesale, big-lot lingerie into carefully crafted lace concoctions and new emoticon-emitting tattooed basics! 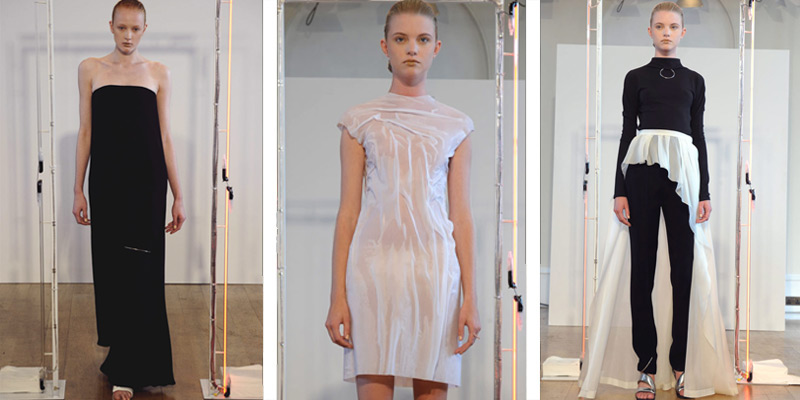 Ann-Sofie Back Atelje
This new mature incarnation of Ann-Sofie Back embraces evening wear head on. Not only did she create a wearable wet-look dress, she invented the most exciting ways to accessorize for night. Infusing metal hardware into skirts and dresses, Back pierced everything! A long metal pendant went through a skirt front, creating folds. Metal rings adorned necklines, were threaded through circular back cutouts, pierced through the ankle of a pant leg, and most famously, emerged as a thigh bangle through a floor-length dress. The designer has embraced the clip-halter trend we foretold as well, which raises her above the fold—pun intended! 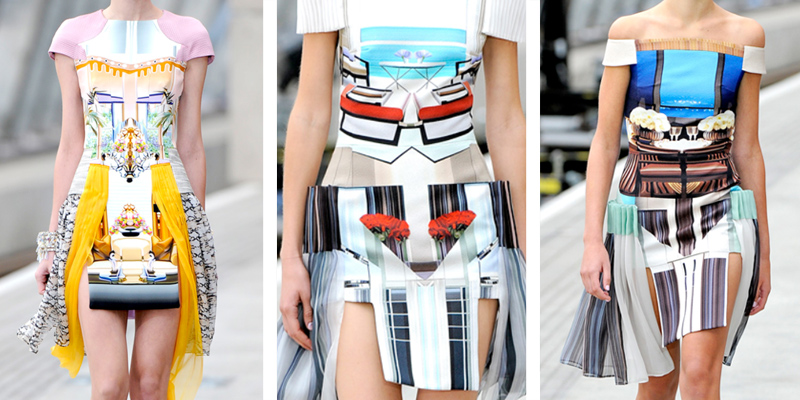 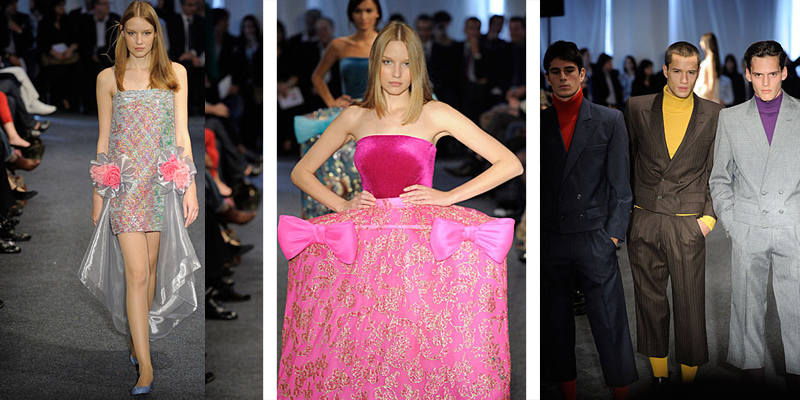 Pierre Cardin
Pierre Cardin exhibited the most thorough collection of Paris Fashion Week. This endless extravaganza of boxy church fabrics was exhilarating and was paraded practically without end. As look after look emerged, it became refreshing how removed this collection was from “fashion” and the Paris collections it was supposedly framed within. In fact, Cardin ingeniously referenced alternative fashion events like DC fashion week and Sunday bests, and he played on the sheer absurdity of occasion dressing. Cardin has long maintained a profitable business through self-mimicry, and it is this tireless penchant for self-promotion that renders him a post-Y2K role model. 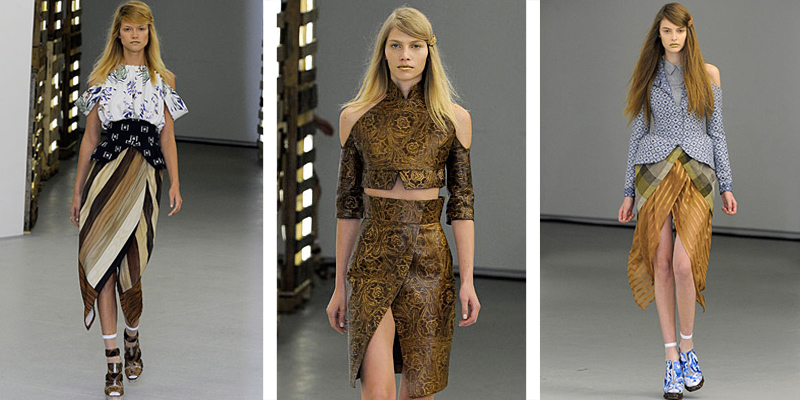 Rodarte
Rodarte have finally made clothes! Ironically, their most desirable collection was entirely upholstery: garments referencing interiors in shape, fabric and detail. This collection looked like Pier 1 Imports, transformed into wearable and interesting ready-to-wear. The Mulleavy sisters’ frail drapery was exchanged for country bedding, Japanese bathrobes, ’70s hotel curtains, tooled leather work, Chinese imperial porcelain, and wood paneling that somehow, combined, made complete sense. It’s not hard to picture a celebrity getting ridiculed in the “Fashion Police” pages of US Weekly for wearing this, at which point the lame punditry will decry that she wore “the drapes, the wallpaper, and the walls!” For an idea like this to even emerge from Rodarte is a victory on their part. Touché, girls. Touché. 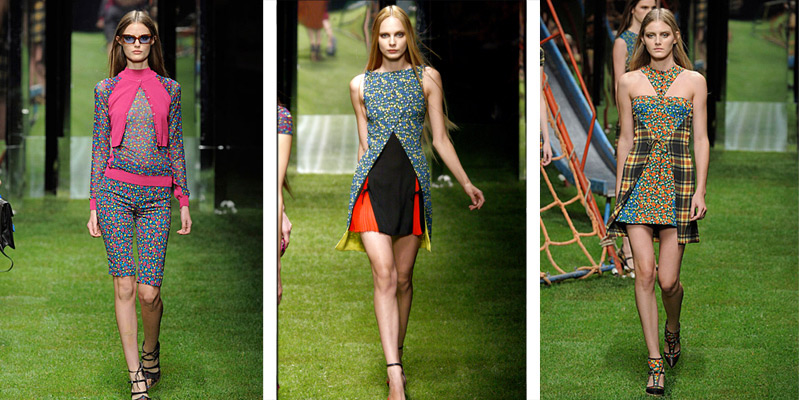 Versus
Versus was confusing, in a fun way. Christopher Kane’s train of thought brought us sexed-up sporty/prairie/tartan medieval-jester looks that were rouched, layered and tied to form sharp cut Versace mini dresses. The look mildly says “rodarted” with a twist of Chloë Sevigny for Opening Ceremony and Williamsburg’s Beacon’s Closet thrown in for bizarre measure. This collection surgically combines unrelated trends into a postmodern Brooklyn party girl version of the movie Splice. 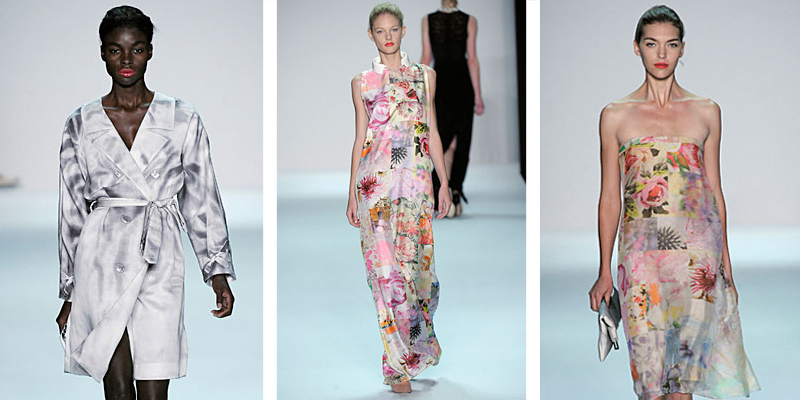 Isaac Mizrahi
The residuals of Isaac Mizrahi’s epic career are emerging this season as a major inspiration. His shapes and concepts echo throughout several collections. Still, despite being busy with reality TV challenges, he keeps bringing us interesting ideas. The inarguable highlight this season was his work with print. Two standouts were his subtle tromp l’oeil that looked like relief rubbing and his totally relevant digital flower collages. Stock imagery-style floral squares were pieced together to create a very Photoshop-era motif that looks so good and very next. 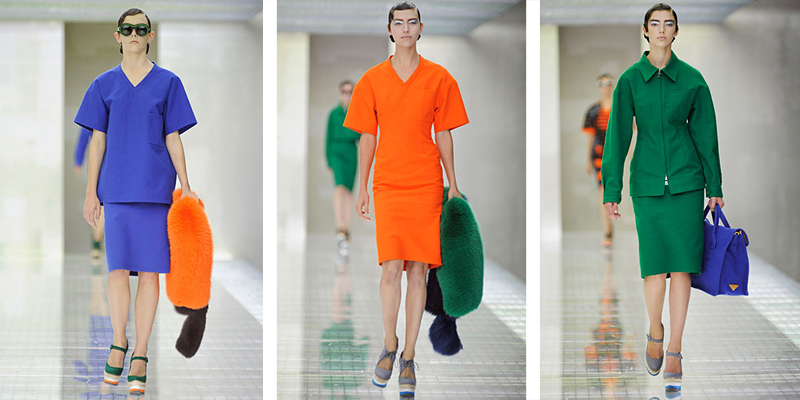 Prada
Scrubs for day! Scrubs for evening! Scrubs with a stole! We have all been waiting for scrubs to be added to the reference list of utilitarian women’s ready-to-wear. Prada featured the hospital garment redone with a new rounded shoulder, a full sleeve, a tailored torso and a pencil skirt, all in strong monochromatic hues. Not only did this concept produce one of this season’s best silhouettes, but Prada sent out this season’s most desirable shoe, a flat platform oxford/sneaker/espadrille. 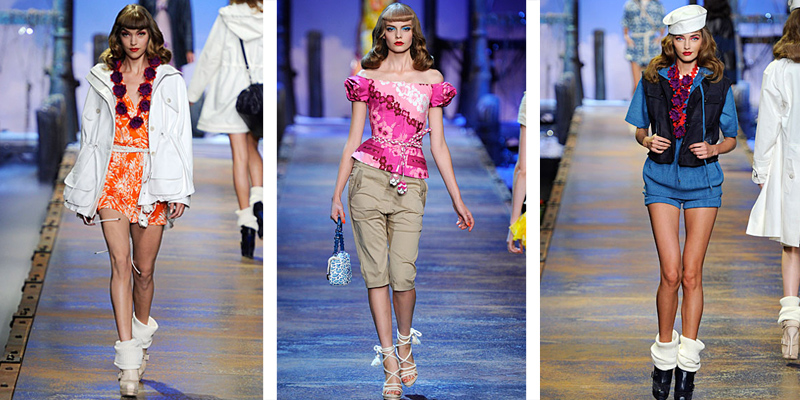 Christian Dior
Whether Galliano was binging on Old Navy ads or watching South Pacific on repeat, this collection had the feeling of Carrie Donovan dancing with monkeys under a palm tree. Although we had been anticipating Hawaiian floral prints and hula skirts for spring, Galliano went further with this heavily merchandised, commercially satisfying collection. 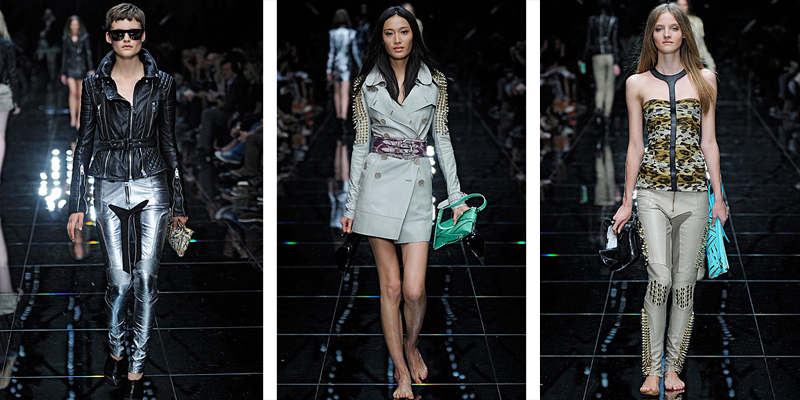 Burberry
The only explanation for this collection is drugs. Christopher Bailey has to have been on some kind of inert heroin bender with Kate Moss not to realize that all of the trends that earn the Burberry stamp in this collection are a season old and completely wrong for 2011. Studded leather jackets cannot go away fast enough. The problem isn’t even necessarily the designs themselves, so much as it is cultural. If 50 designers design the same trend for a couple of seasons, any reasonable person would find the repetition boring and would look forward to a new idea, at least for amusement. The question is: what prevented Christopher Bailey from experiencing this reflex? 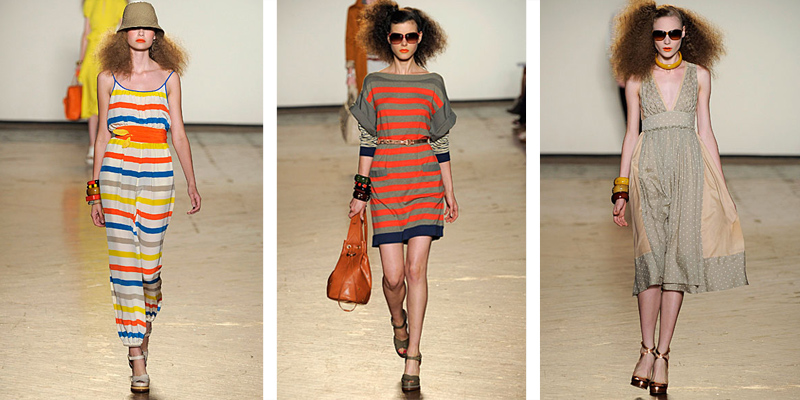 Marc by Marc Jacobs
The market for Marc by Marc Jacobs may be spoiled tweens and preppy zombies who don’t know where to shop, but this collection still confounds. Marc’s in a vicious cycle of tracking what sells and striving to please his consumer, but it’s turned into the blind leading the blind. Clueless people buy this, so the design team makes it on repeat until one day someone has to wake up and scream because they realize they haven’t left 2005 and they’re drowning in indistinct sundresses in a bachelorette hellhole of MJ’s making. 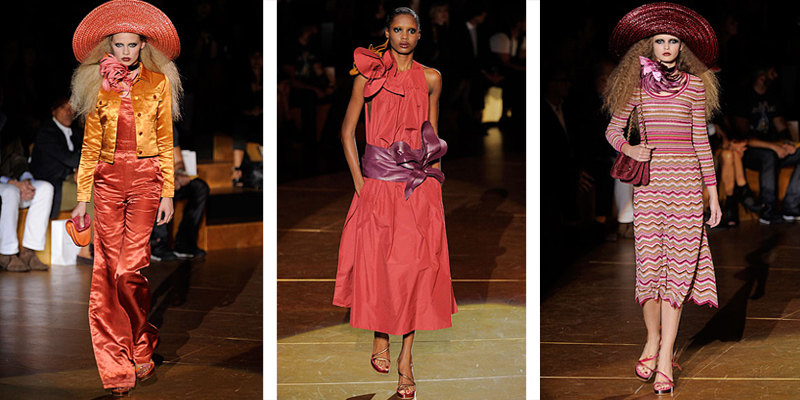 Marc Jacobs
For his signature collection, Marc was having way too much fun in Cannes this summer with Naomi, so he decided to unabashedly regurgitate “the usual faves” (YSL and the New York Dolls, etc.). The result of this slacking-off is a dismal array of cheese-whiz seventies signatures, all replete with cheap costume department accessories. This collection was designed for nationwide thrift stores and bargain bins deep in Midtown. 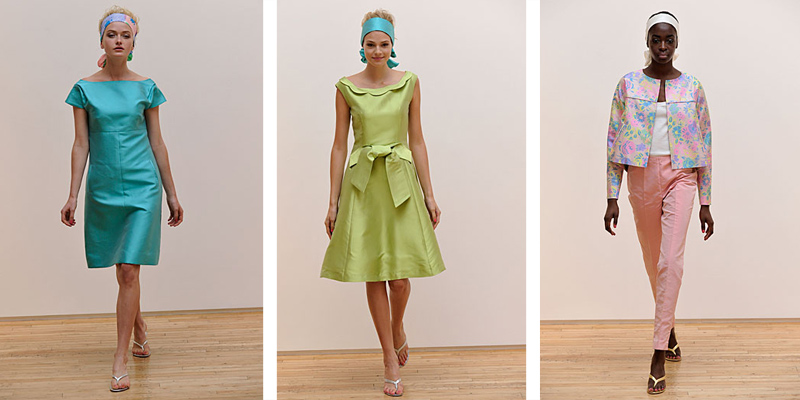 Barbara Tfank
This may be a tough pill for America to swallow, but we should probably stop allowing Michelle Obama’s style choices make or break careers for budding designers. Case in point: Barbara Tfank. She’s trying so hard to make iconic first-lady clothing that it’s all totally unoriginal and looks like Jackie O resort wear from the costume department of the TV movie based upon her life (starring Katie Holmes). It’s not even slightly modern and contributes nothing to the evolution of fashion. When editors are looking for up-and-coming New York fashion talent, they should not be going in this direction; it’s precisely why European editors think New York Fashion Week is SO BORING. The Style.com review says that, besides Obama, her clothes have been worn by Vanessa Redgrave and Adele. Translation: grandma garb. Old ladies dress that way because they are confused about the era they are in and they usually have bad eyesight, bless them. 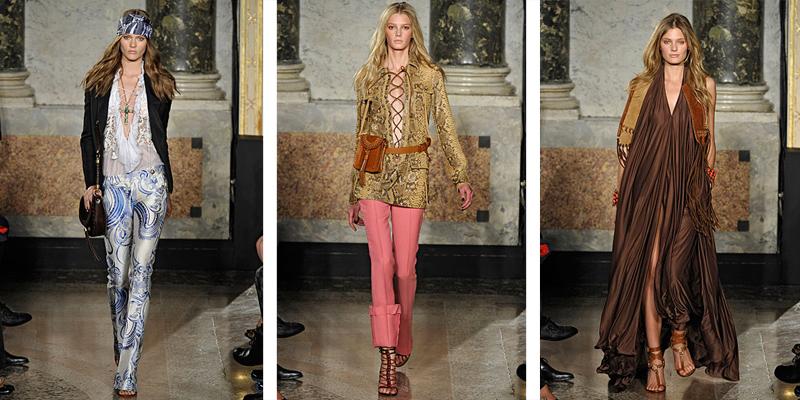 Pucci
I’m not intellectual at all as a designer.
– Peter Dundas

Clearly Dundas has a firm grip on reality, but is this retro revival, Roberto Cavalli-inspired, decadent 60’s European lifestyle considered glamorous? It’s never good when the audience can imagine the mood board as clearly as they can see the bronzer on the models. Veruschka in YSL by Franco Rubartelli circa 1968 surely made an appearance on those boards. Perhaps that explains why they shoved the model onto the runway without her pants so much as hemmed, a crucial look indeed. 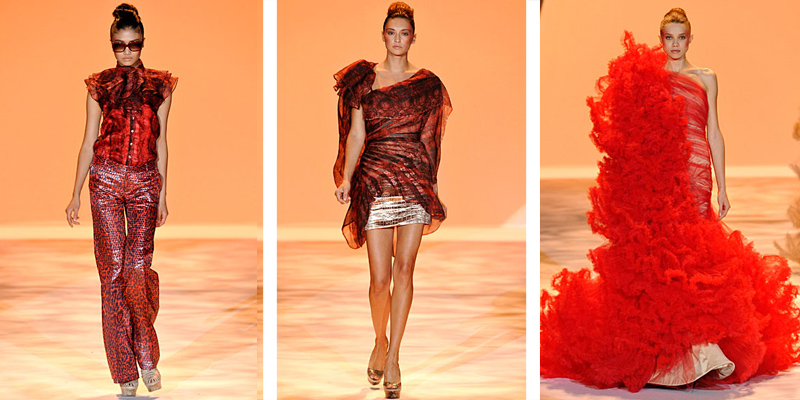 Christian Siriano
Television has taught Christian Siriano irreversible lessons in commercialism that once injected into an entire body of work, such as a collection, come across as sinister and downright Satanic. Everything is so consciously cautious and drab, but it masquerades as daring—with odd volume and bright color—so Midwestern cable-viewers can feel “New York” and “High Fashion” when they wear his glorified business-Barbie prom attire. Any grown woman who wears this is exposing herself as a fearsome adult baby who never grew past unrealistic Mattel gown fantasies. This brand only makes sense in the insular world of made-for-TV fashion and would best find its target audience on QVC or the Home Shopping Network. That’s where this queen belongs. 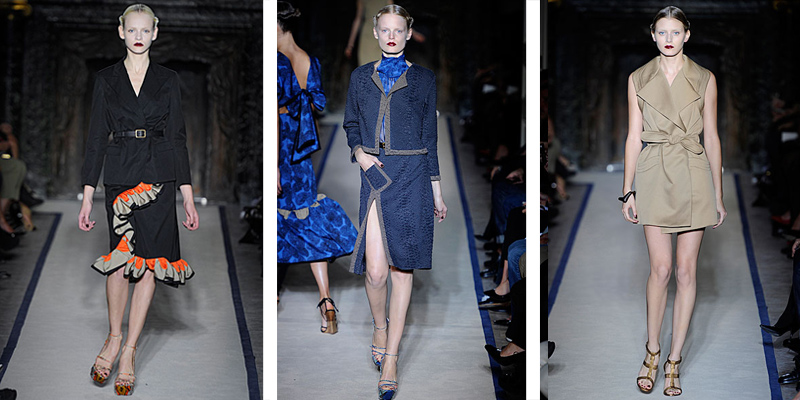 Yves Saint Laurent
What is this clothing? You can’t wear it to work, and you would never wear it to an event. Is it for an early-morning coffee date? A late night rendezvous so nobody will notice you? Stefano Pilati is grasping at straws, attempting to pull together a collection without the slightest spark of creativity or inspiration. Did he really send a sleeveless trench coat out as a dress? With three decades of Saint Laurent archives to mine through, it’s humiliating this is all Pilati could muster. 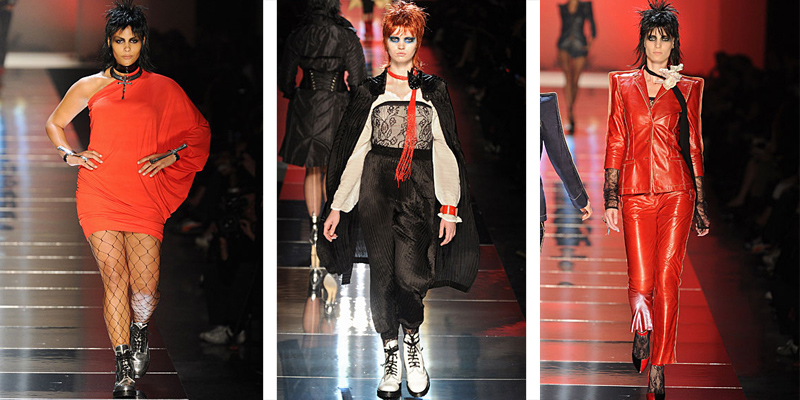 Jean Paul Gaultier
The Runaways came out LAST spring, and “Halloween Slut” is traditionally reserved for Fall. This is what happens when unpaid interns take over fashion houses. Everything in this collection looks like it was pulled out of a Ricky’s dumpster the day after Halloween.

On a side note, we love you and we know you can do better than this. The first step to recovery is admitting you have a problem. We’re here for you if you need help. 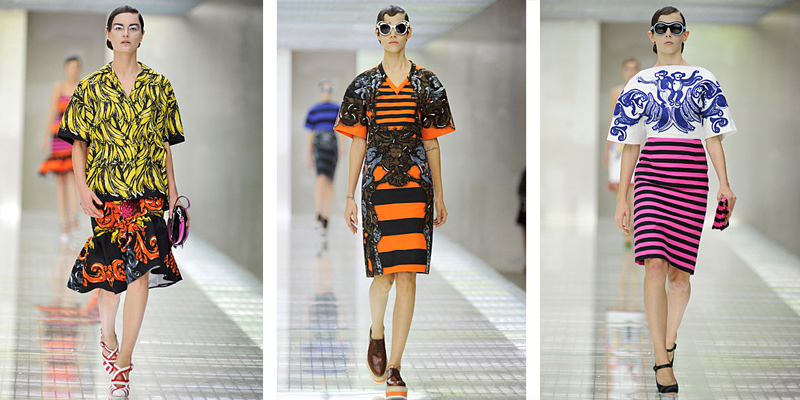 Prada
While the silhouette remained strong the prints went wrong. Miuccia’s Josephine Baker reference with messy baroque molding and neon embroidery was a dangerous turn. This collection’s experimentation with stripes went nowhere, but the worst element was the embroidered iconography of a dancing woman with a giant pineapple hat. Where that came from, is and should remain a mystery, lest any Prada wannabes try jump on the Conga line.