As an amalgamation of loosely connected artists experimenting with forms of performance, the downtown NYC theater scene continues to blossom through shows that are increasingly rooted in technological ingenuity. Andrew Schneider’s latest piece, YOUARENOWHERE, reflects this cultural atmosphere by using theater as a technological means to explore quantum physics, or perhaps the other way around. The following text is a conversation with Alessandra Calabi, the stage manager and a core constituent in the creation of YOUARENOWHERE. 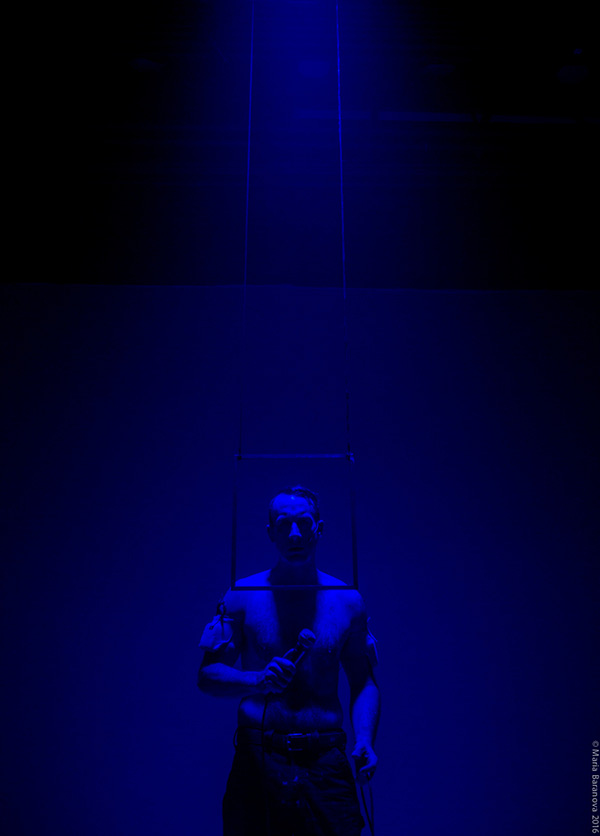 What stood out most vividly to me in YOUARENOWHERE was the relationship between technology and theater. When an average person thinks “theater”, they’re likely to associate it with traditional notions of acting, narrative, dramaturgy, or “Broadway”. How important is technology in YOUARENOWHERE — and how can it push theater toward new horizons?

AC: Technology – and its failures – have been from the beginning an integral part of the show. Andrew was a technician and video designer at the The Wooster Group for many years, and their methodology of building shows, in which the technical elements are present from the early development days, is also present here. There is no distinction between creative and technical in the classical dramaturgical-chronological sense – it isn’t “here is an idea we had in rehearsal, now how do we implement technology to make it happen once we get to the theater?”, but rather “what experience can we or do we want to create with the technology we have at hand?”. This is not new in downtown experimental theater, but with this show there is a sense of pushing the limits of what is doable, of breaking the rules of how the hardware and software are meant to be used, combined with a focus on the sensorial experience of our interactions with these types of technology. All of this feels innovative and different from everything else I’ve ever worked on. I am reluctant to even call it a theater show because of the highly sensory nature of the experience – in some ways it is closer to experiential visual art than to narrative theater. 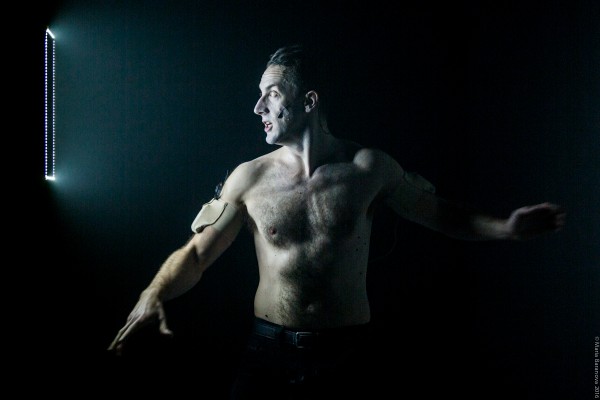 Watching the show, I imagined what a seamless balancing act it must be to integrate such complex programs behind the scenes into a starkly one-man show. In a way, this qualifies YOUARENOWHERE as a kind of “transhumanist theater”, where actors are augmented by and inseparable from technology. Do you think the show can be a blueprint for the future of theater in this way?

AC: I hope so! The overwhelmingly positive reactions we have had from audiences worldwide, especially from non-traditional theater-goers, make me think that this kind of alternative theatrical experience resonates across cultural, geographical, and economic lines. On a socio-political level, it makes sense that theater should be something that questions our everyday relationship to contemporary technology and interconnectedness. For most people living in advanced capitalist economies today, the separation between life and technology is blurry at best, so it organically follows that these technologies would be integral not only formally but also in the conceptual and emotional fabric of  live performance. Lately there has been a significant shift in audience expectations, combined with a growing desire for more active participation, challenging their very position as audience.. One of the great (and somewhat unplanned) effects of YOUARENOWHERE is how disorienting the piece is, on an emotional, intellectual, and physical-spatial level. That being said, the human element in the show is very strong. There is an interesting interplay of visibility between what is live and human and what is automated throughout the piece, and as technology takes center stage the human element tends to retreat. The point is, we are not dealing with a simple dichotomy of machine vs. human or technology vs. nature, but rather are looking to the places where one ends and the other begins, and who ends up being in control. 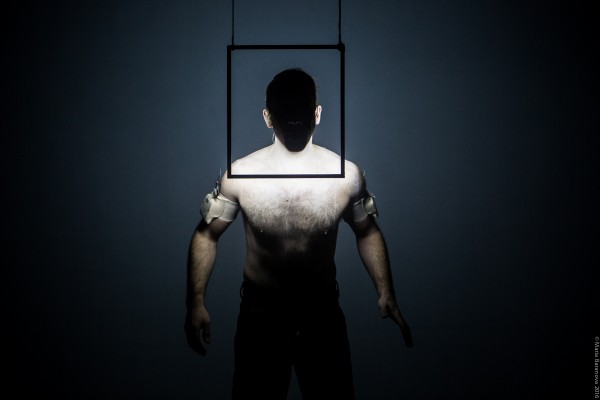 Elements which are typically supplementary in the staging process take on a primary function in YOUARENOWHERE. I’m thinking specifically about light and sound, and how central they are to the development of Andrew’s character. As a stage manager, were there any obstacles related to sound design or lighting expertise that challenged you in doing your job? How did your previous experience prepare you for this?

AC: Everyone who works on YOUARENOWHERE is cross-trained – I am the stage manager, effectively running the show, but also am at times in charge of lights and video, and act as the dramaturge and outside eye for Andrew. My non-traditional background – being trained in theater and performance but also having a degree in philosophy – was a big reason why he wanted me to be part of the company: I have both a technical and conceptual understanding of the show, a critical interest in problematizing traditional forms of narrativity, and a willingness to step outside my role given my holistic understanding of theater-making as essentially collaborative art. What ends up being most challenging on my end is actually the organizational and human element, since this is as much a one-man show as a large-scale piece of performance art. I have a background in formally experimental theater, having worked on shows involving as many performers onstage as audience members (Pascal Rambert’s A (micro) history of world economics, danced), or shows that infiltrate public spaces and complicate the relationship to space and narration (Private(i) by Fixed Agency), so the challenge of YOUARENOWHERE was more exciting than intimidating. Before working on YOUARENOWHERE, I was in residence at the Brooklyn Navy Yard developing an immersive theatrical experience that dealt with the ever-growing overlap between surveillance and social media: themes of digital communication and identity are ones I am always keen to explore. 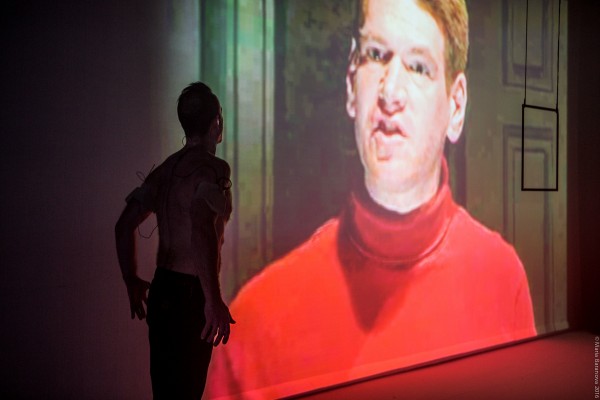 Given all the technological sophistication underpinning the show, it struck me as a work of design just as much as it is theater, blurring the lines between production and design. Does the crew identify themselves as designers? What kind of programs are necessary to run the show?

AC: Most of us identify as designers and technicians as well as artists, but most importantly for the show we are collaborators, and that flexibility allows for a very intricate design to be achieved with such a small team. We are all versed in the different elements that make up the show since it is so complex and layered and there are only six of us touring with it. My understanding of the artistic process is essentially collaborative, so I found myself at home in this non-hierarchical collective where everyone’s particular skill contributes to a chaotic but somehow functional whole. Because of this, it is almost impossible to replace any one of us—which is both a blessing and a curse! The programs we use are Ableton Live, which sends MIDI data  to Max and Isadora for lights and video. To control the dimmers, we use ETC-brand interfaces hilariously called ‘gadget’ and ‘dongle’ and EOS lighting-control software that simulates a physical light board. Everything traces back to Ableton Live, which is traditionally a music production software, because of its ability to layer separate MIDI tracks and sync up lights, sound and video hyper-precisely. Needless to say, our booth set up is a little crazy. 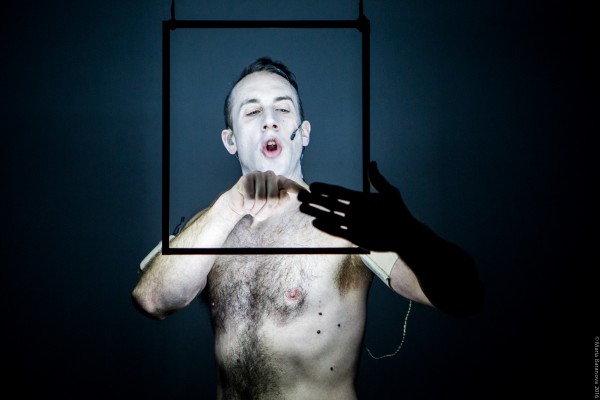 What does the future hold for YOUARENOWHERE?

AC: We are heading to London (shoutout to the new mayor) to perform at Shoreditch Town Hall for the LIFT Festival in June, and more domestic touring is in the works for the coming 2016/17 season. Andrew is developing his new show FIELD which will premiere in 2017, so stay tuned for more “transcendent mind-fuckery”, as one publication aptly described what we do.

All images by Maria Baranova