Returning to the site of protest

Returning to the site of protest
Originally named American Flag, the town of Oracle, AZ is a microcosm of an America polarized by partisan immigration politics. Artist Yoshua Okón discusses the pitfalls of nationalism with Matthew Grumbach.

As Republican hopeful Donald Trump announced his candidacy for president with a number of combative campaign promises, like building a “great wall” across the southern U.S. border and forcing Mexico to foot the bill, artist Yoshua Okón was adding the final touches to his new four-channel video installation, Oracle, a transfixing investigation of nationalism and immigration in the wake of global financial capitalism. In the video, anti-immigration protest leaders reenact a demonstration that took place in Oracle, Arizona last July to oppose the transfer of unaccompanied immigrant children to a local troubled youth facility named Sycamore Canyon Academy. After seeing a picture of the protest, Okón began research on Oracle and later set out interviewing the town’s anti-immigration organizers from the Arizona Border Protectors, formerly known as the Minutemen.

Oracle offers an unsettling coda to Okón’s Octopus video installation from 2011, a work he developed as an artist-in-residence at the Hammer Museum. Octopus depicts a group of day laborers reenacting the Guatemalan Civil War (in which they served) at a Home Depot parking lot in Los Angeles. Unlike what art historian John C. Welchman describes as the “radically deterritorialized” setting of Octopus, which stages a war reenactment in the precarious economic zone where ex-guerrillas seek temporary work, Oracle returns to the original protest site. The pilgrimage is haunted by the specter of an enemy that never materializes, but whose ghosts are very real. The unforgiving southern Arizona terrain is where migrants often succumb to “silent deaths” crossing the border, due to dehydration and exposure to the desert heat. Oracle is located about 40 miles northeast of the Pima County Office of the Medical Examiner in Tucson, which oversees one of the largest repositories of undocumented border crosser remains in the U.S., receiving over 2,330 recovered remains since 2001.

What might seem like hostile territory turns out to be where Okón discovers a kind of disarticulated solidarity. By prompting participants to enact their ideological perspective, his working methods reveal the conundrum of resistance in a neoliberalized world. The nationalist paradigm is not so reprehensible when it is reduced to a set of shared conditions: precarity and marginalization. Following Oracle’s debut at the Arizona State University Art Museum in Tempe, Okón shares his experience producing his latest work in a town polarized by partisan immigration politics.

Matthew Grumbach: Can you describe what it was like when you first arrived in Oracle, Arizona and how you recruited the protesters in the video?

Yoshua Okón: I was unable to establish communication long distance so, in late 2014, I went directly to Oracle without any contacts whatsoever, and stayed at a bed and breakfast. I told the owner about my research, a really great lady who got interested in my project, and she mentioned that one of the organizers had posted a sign announcing the protest in the town’s post office. The sign had his phone number and she happened to have taken a photo. So I called and arranged a meeting in which I told him exactly what my intentions where: I was there investigating the July 2014 protest against unaccompanied Central American children entering Oracle and I wanted to know if his group would be willing to reenact the protest for my cameras. I said that my intention was to try to be as objective as possible and that deep down my interest is to explore the tensions between the forces of globalization and the nation state. He said he really liked the idea because he wanted to get his message out there. That was my first encounter, which led to subsequent trips during which I met other members of the group (Arizona Border Protectors) and planned out the shoot, which took place in early April, 2015. 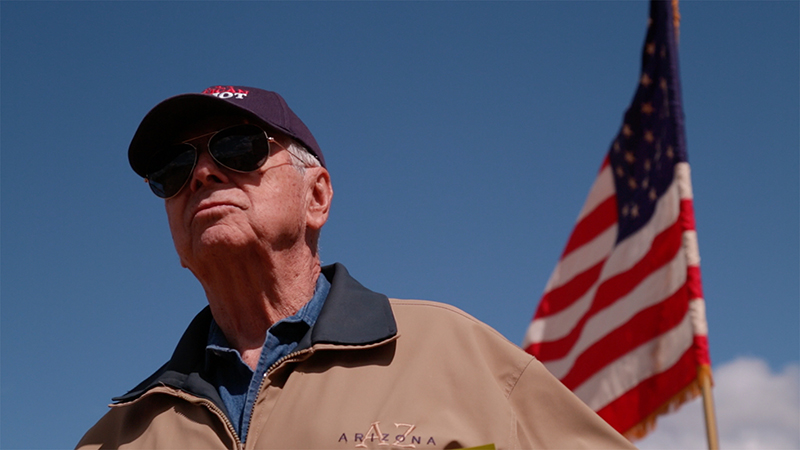 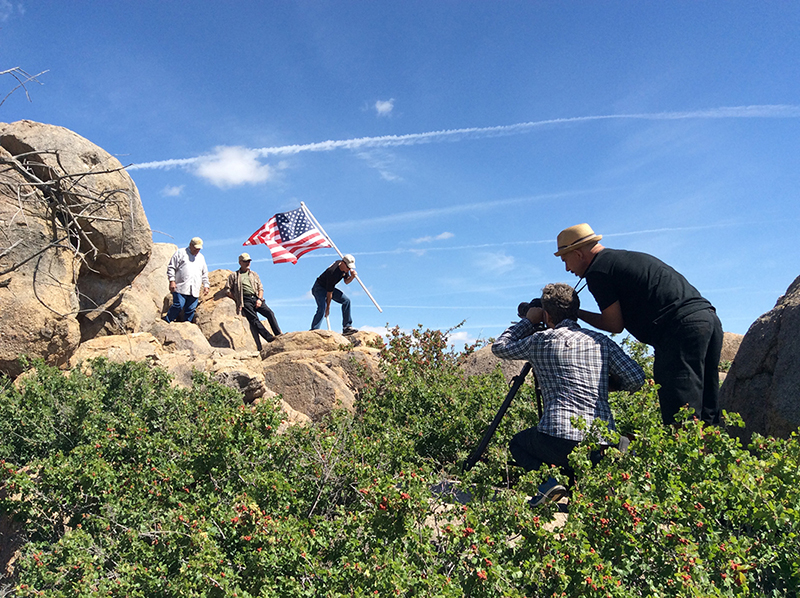 MG: Are the immigrant children who sing the modified “Marines’ Hymn” in the video part of the group that was taken to Sycamore Canyon Academy?

YO: They are part of the over 60,000 unaccompanied children from Central America that came to the US in 2014, but they are not the ones at Sycamore Canyon Academy because the director of the academy wouldn’t grant me permission to film them.

MG: The Oracle community guide showcases almost thirty different local artists, gardening tips, and a number of wildlife attractions. From what I gleaned, the town looks quite pleasant. Was the fear of an “immigrant invasion” a pervasive element of day-to-day life?

YO: The town of Oracle is socially very divided, to the degree that the two sides hardly talk to each other. On the one hand you have artists communities and democrats, who are pro-immigration, and on the other, conservatives who are against immigration and quite obsessed with the subject. The town is like a little microcosm of the whole country. During the anti-immigration protest, a counter-protest was organized by the pro-immigration side with the slogan: “Open your hearths.” So a big portion of the town clearly doesn’t fear an “invasion.” But even if they are pro-immigration, foreign policy is still not being taken into consideration they address the topic, which is essential, especially when it comes to Central America. Their motivation has to do with compassion, rather than with responsibility, which is nice but at the same time quite problematic. One of the counter-protestors told me: “We should be compassionate and open our hearths to these poor children who come from violent and corrupt governments.” As if the children come from another planet and not from countries that were invaded by the U.S., in complicity with certain corporations. Nationalism creates the illusion that we live in an isolated bubble rather than a transnational system that is deeply interconnected. Parts of the world have been historically plundered and now face extreme poverty – the social tissue has been destroyed. For example, 99% of the profits from mining, Guatemala’s biggest industry, leaves the country.

I think Nationalism gets in the way of understanding root causes for immigration and of finding solutions to the big challenges we face in this highly globalized age. It is a very alienating ideology. 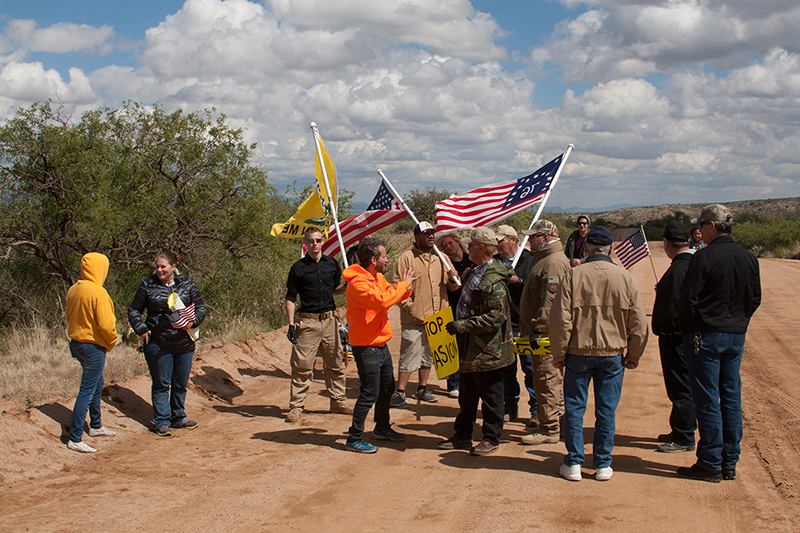 3. Yoshua Okón, Oracle, Behind the scenes, Photograph by Travis Diehl, 2015.

MG: You were also intrigued that the town shares the same name as the database-software company Oracle. Larry Ellison, the former CEO and founder of Oracle Corporation, has frequently dismissed concerns about data privacy and state surveillance. In a CBS interview with Charlie Rose following Edward Snowden’s leaks, Ellison asks, “Who’s ever heard of this information being misused by the government?” Can you elaborate on Oracle Corporation’s connection to the U.S. intelligence community and how that pertains to this piece?

YO: I am very interested in looking at immigration within the larger context of neoliberal transnational capitalism. In this paradigm, the lines between public and private are being increasingly blurred and state structures are increasingly at the service of private transnational interests. Oracle’s anti-immigration protestors are very angry at the U.S. government’s complicity with transnational corporations. They think that the government no longer works for the common good of citizens but rather for the interest of corporations, so they feel abandoned and betrayed. Ironically they are the victims of the same forces than the Central American immigrants, even if it is to a much lower degree. Oracle Corporation is the perfect example of the above-mentioned paradigm, in which the line between public and private is fading. From the outset, this corporation has worked for the CIA; ties run so deep that the company’s name was taken from a CIA project they developed: “Oracle Project.” This great coincidence with the names turned out perfect for my piece! 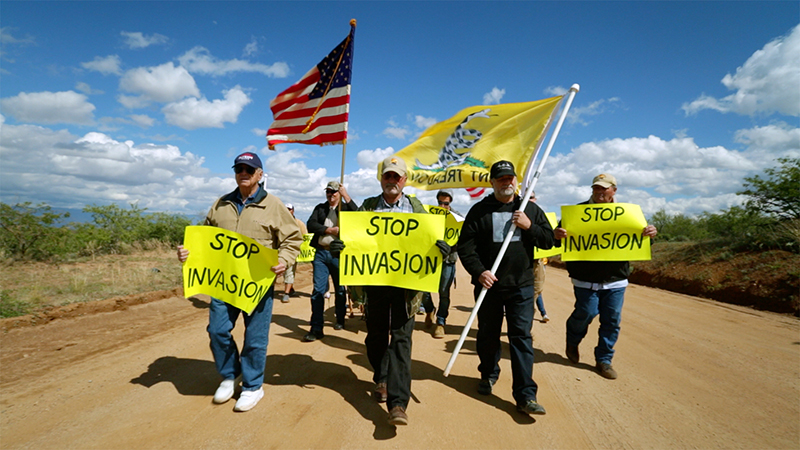 MG: Like the Octopus video, Oracle documents a reenactment of a protest by the people who actually participated. What draws you to reenactment as a documentary form?

YO: I see reenactment as a form that can give us great insight into reality. Working with actual original participants and locations of historical events, as opposed to actors and sets, is a way to anchor the works to reality. But it is also a great way to create a tension between fiction and documentary, because the moment you put a camera in front of someone you automatically enter the realm of fiction as. This tension tends to encourage viewers into establishing an active and creative relationship to what they are watching, it draws viewers into seeking interpretations and therefore into reformulating previous ideas of reality and of whom we are.

This aforementioned tension or blurring of the lines between fantasy and reality is further accentuated by stylization. I place a strong emphasis in formal, poetic, psychological and even in absurd aspects in order to go beyond historical facts. It is not journalism, even if there is a degree of it.

It is important that viewers are aware of my hand as a director.

MG: In conversation with Laura Poitras for Artforum, Hito Steyerl says, “Postproduction is not working on content in retrospect but creating the content. Editing is where the meaning is created.” Do you think restaging past events constitutes postproduction?

YO: I never thought about it in that way, but I really like your analogy! Yes, restaging past events is definitely a way to create meaning. It is not about going back to the past but, rather, it is a way to think about our present connection to the past. It is about providing a wide perspective, a context and even humor, in order to rethink our idea of the present.

MG: Whether it is Newport’s Fashion Island in Salò Island (2013) or the Home Depot parking lot in Octopus, dislocation is a key component of your videos. In the case of Oracle, why was it important to stage the reenactment in the vicinity of the original protest site and not, let’s say, a Walmart or the Oracle Corporation offices in Tucson, particularly if neoliberalism is really the target of the protesters’ ire? 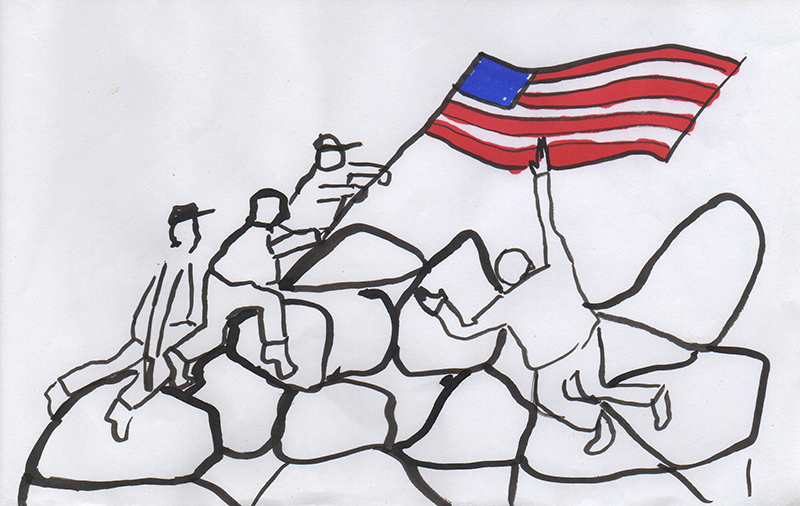 YO: The site of the protest where Oracle was shot does allude to neoliberalism. Many of the effects of neoliberal capitalism, like the creation of massive extreme poverty in rural areas, are more visible at the border. For instance, the dramatic arrival of tens of thousands of unaccompanied children from countries that have been systematically plundered is directly linked to neoliberal policies. Oracle’s protest, which was orchestrated by the Arizona Border Protectors in direct response to the arrival of the children to that town, was the site where a lot of the tensions that had been building around the border for years exploded. People from all bordering states in the south attended. So, as in the case of the Home Depot with Octopus, there is a symbolism to the site, which is linked to corporate capitalism.

On the other hand, for this piece I was not only interested in addressing neoliberalism and its negative effects, but also in addressing the inadequacy of nationalism to face the big challenges that result from these disastrous policies. I am also interested in talking about nationalism as a source of violence and discrimination. And finally, I also attempt to point to the perverse complicity between transnational capitalism and national governments, resulting in a double standard. Certain corporations, and a very small portion of the world’s most privileged population, have no border restrictions, but the overwhelming majority of the rest of people do. So I also chose the site of the protest because that is where this systematic contradiction is made palpable. 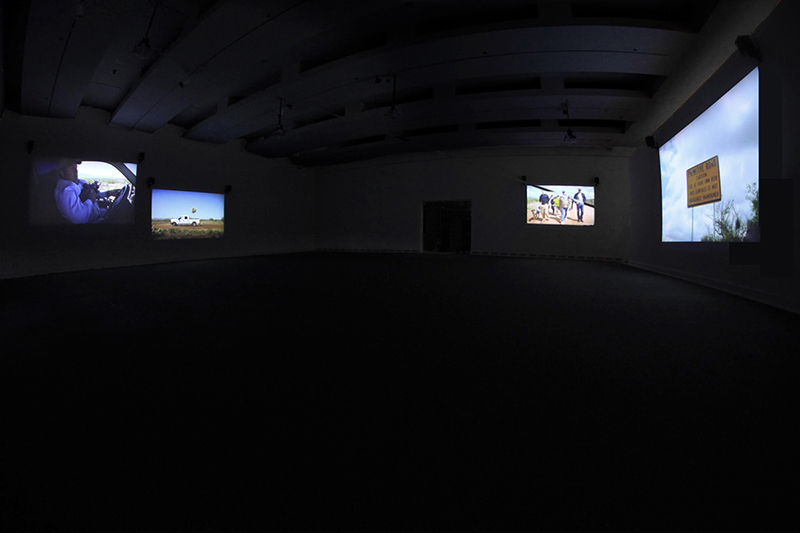 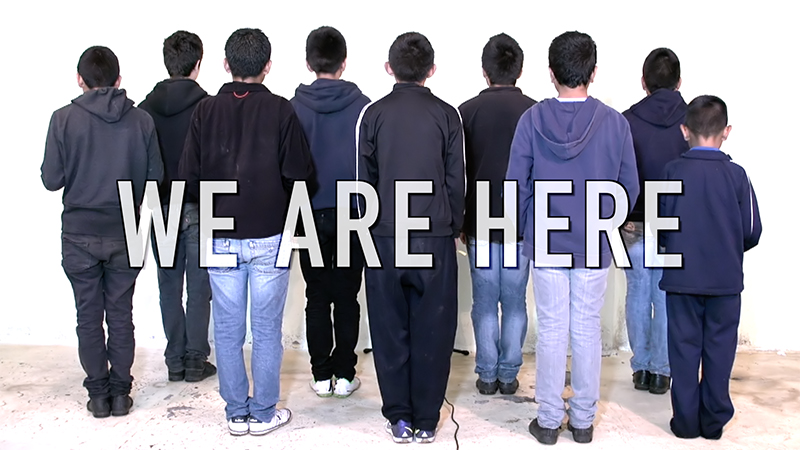 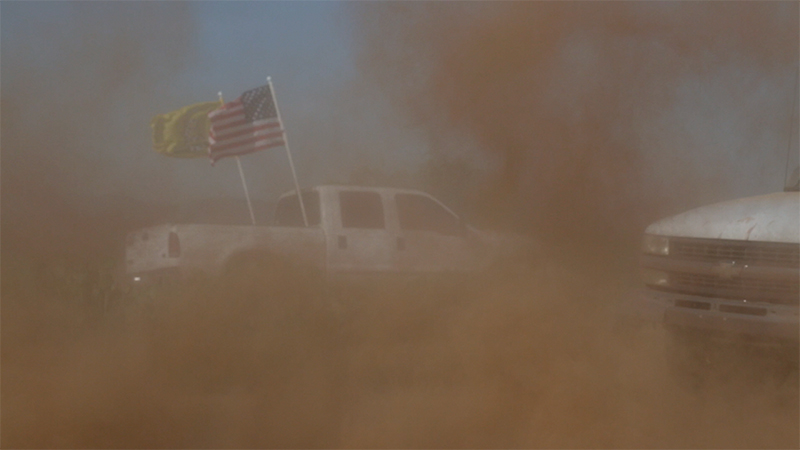