Patrick Tuttofuoco (Milan, 1974) lives and works in Berlin. For his solo show in Milan at Galleria Guenzani he presented a new series of works, starting an exchange and a negotiation process between a private and a public dimension, namely the apartment of his friend Ermanno Previdi and the McDonald’s in Milan’s Piazza Duomo. These spaces loaned the artist some iconic objects that were displayed in the gallery whilst a soundtrack created with Novo Line, a sound-based project of a Berlin-based American composer, played in loop.


Text by Valentina Sansone
with a short story by Nicola Ricciardi 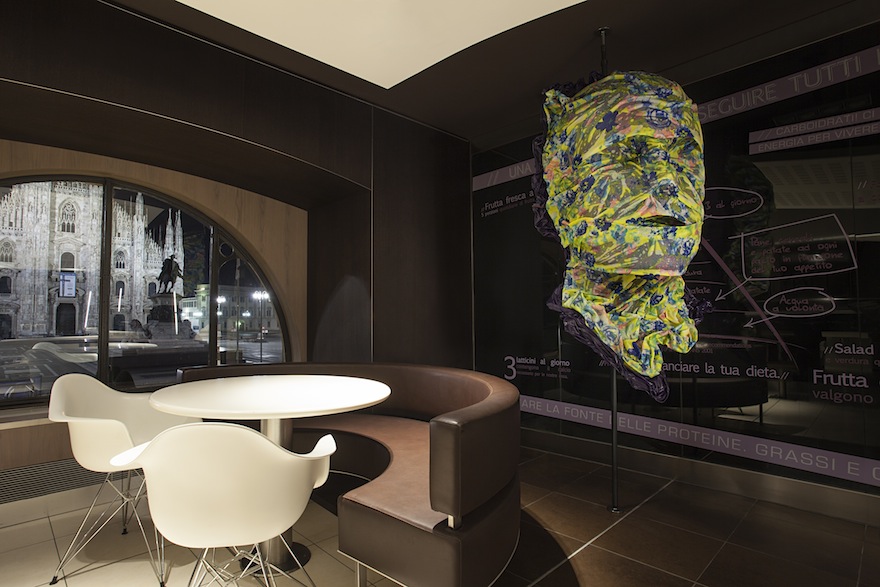 Just a few days ago, I came across an article published in a science magazine reporting a recent discovery. It seems that all the images our brain elaborates are subjected to distortions if a specific, visual context undergoes immediate changes. Since these alterations correspond to a delay in recording certain data, although they are included in our field of vision, however, present time coincides with an ‘immediate past’, namely everything that we have seen in the last 15 seconds ca.

This research – that has just been released (Pnas, May 2014) – also indicates a perceptive mechanism, according to which the present time that we are aware of is just a compromise of what we have experienced only a few seconds earlier. Over the course of this process, the visual system continuously aims to put together inputs that are alike, in order to obtain an average.

What would happen if this ‘immediate past’ were to expand, until reaching the time of our memory? If images were modified by visions that originate directly from our past, such as childhood for example? 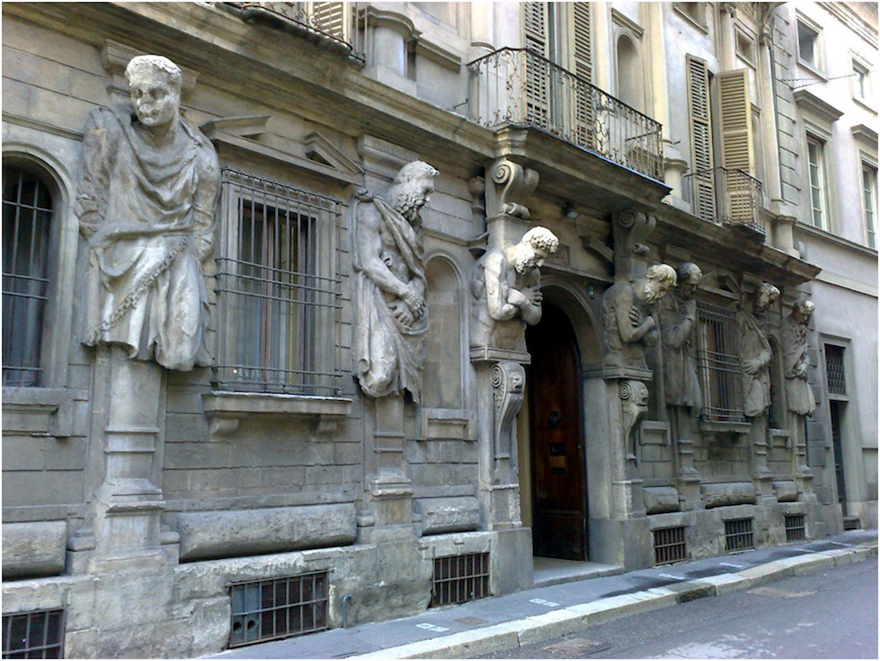 When Patrick Tuttofuoco told me that, as a child, he used to ask his father to take him to see the Atlantes on the façade of the Casa degli Omenoni in Milan, I thought about the first time I watched E.T.

Face features are contorted by my imagination, the shapes are influenced by my memory. Indeed, E.T. has always scared us: he comes from a very far and unknown place, but at the same time he is our friend.

The hardness of the resin and wrinkles on the face. 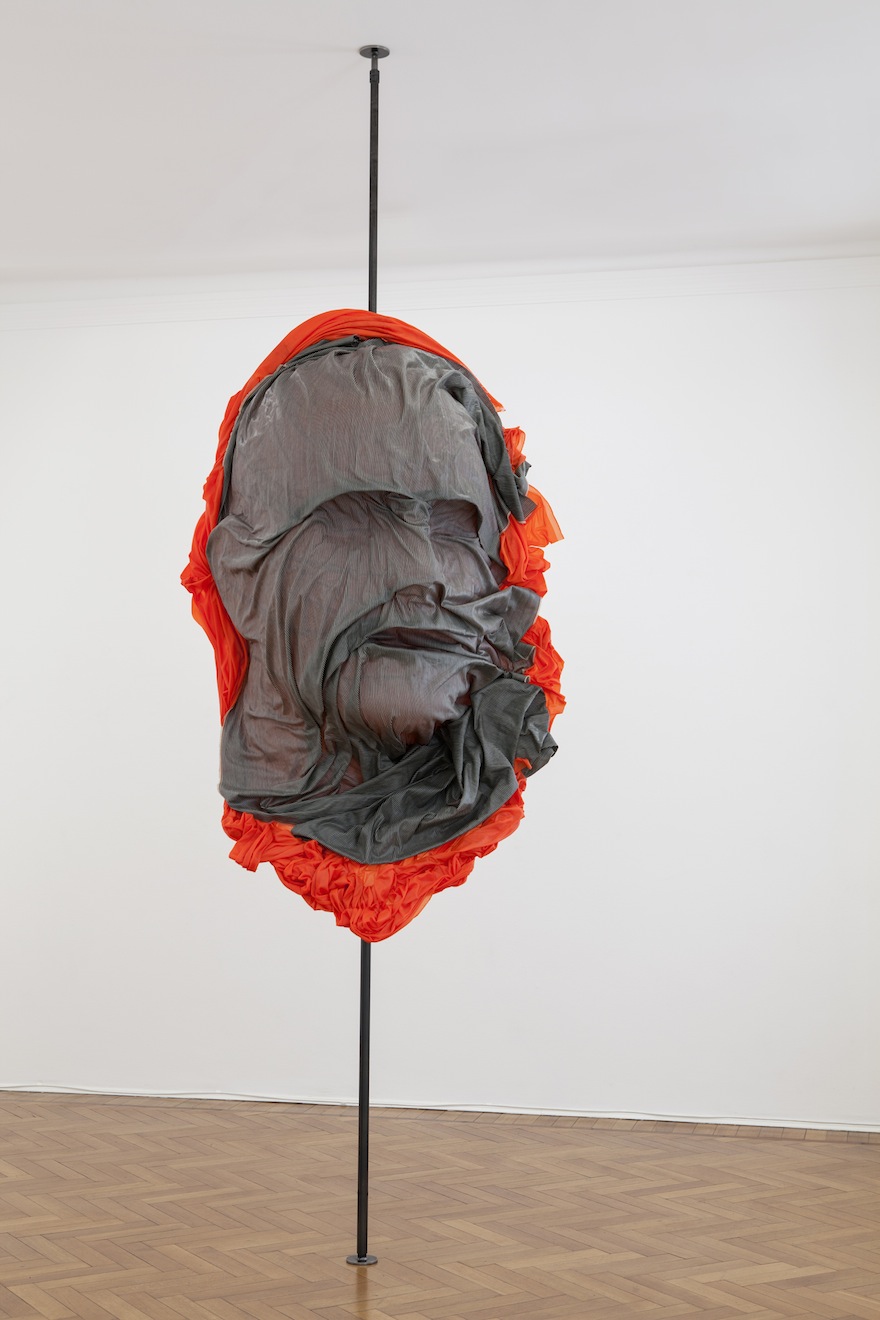 “Once I left” – Patrick continues – “I walked through the city center to join my family, through those childhood neighborhoods again and again, when I came across that façade. For some reason, instead of hesitating in front of those shapes, totally distorted by my brain and transformed into their demoniac version, I tried to understand what the meaning behind those figures was. Sitting on the sidewalk, I researched the history of the building and, in particular, of those human figures, so charming and shameful at the same time. I discovered that the eight massive Atlantes represent the defeated barbarians and that they are greatly inspired by the classical models of the Atlantes typical of ancient sculpture. Their origins are written in their names, just above the barbarians’ heads: Svevo, Quado, Adiabene, Sarmata and Marcomanno.

After several years, I was still very interested in the combination of the man (his image and shape) and the architecture of the façade within the urban landscape.

Departing from this, spontaneously, I started thinking about a series of poles going from the floor up to the ceiling, just like the columns of the building with the Atlantes, that could also function as a tool in order to pierce sculptures (human figures), such as crazy skewers.” 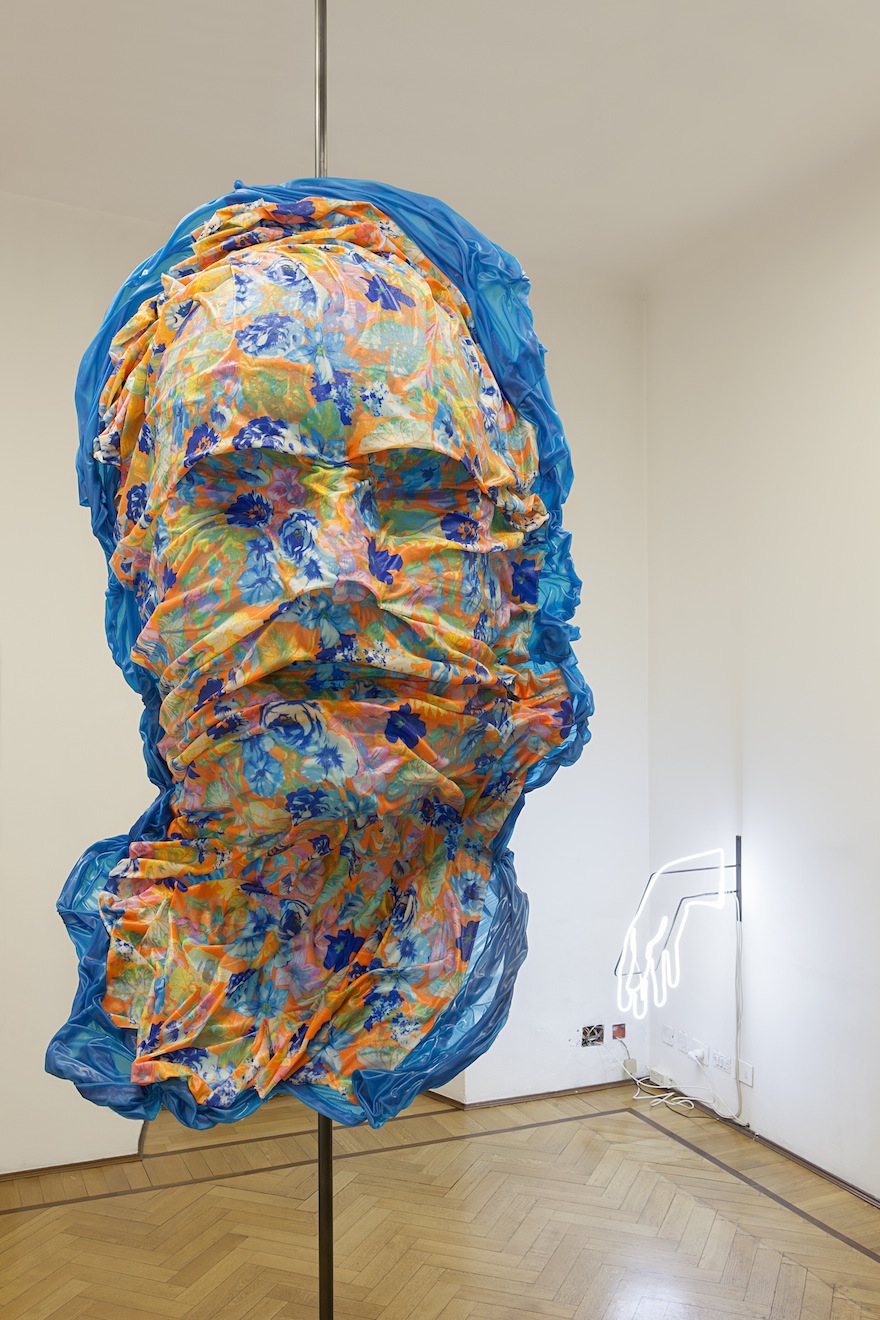 Who these Atlantes, or the defeated barbarians, are and where do they come from?
Do they come from very far away like E.T.?
Are we them? Or are those around us?

He gave one last fleeting look at the semi-hollow tray that laid in front of him – the crumpled paper, residual remnants of sauce and chips, a straw still wrapped in its white envelope – then he stood up, with a slow but firm movement; both hands against the table, calves slightly pushing away the chair, his back assuming an upright position. Only a vibration in the front right pocket of his pants broke the continuity of his motion. He took out his phone and passed his thumb gently across the screen, leaving a trace on the otherwise immaculate surface. Another customer, not far from him, and he too sitting alone in front of a half- empty tray, watched the dazzling light of the display reflecting in his eyes as he read the content of the message: “Via degli Omenoni number 3”. He then put the phone back into his pocket, took the tray with both hands and placed it on top of the trash bin behind him (the one with a double golden arch engraved on it). 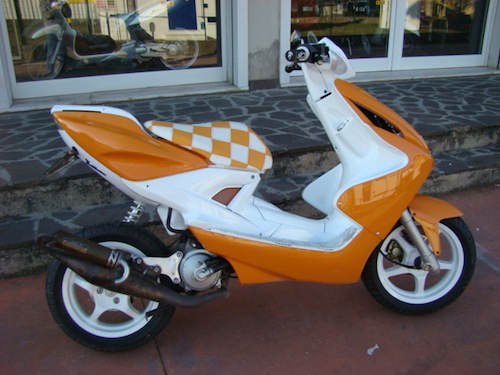 After slipping on the jacket, one sleeve at a time, he descended a flight of stairs and went out into the square. Before him stood the cathedral, all lit up, and to his left were the porches, with the shops illuminated as well. If he had shifted his gaze to the right and upwards he would have noticed the big red neon sign that seemed to float in the darkness of the night. He decided to take the scooter. It was parked next to a small white taxicab, and from afar the bike looked e-x-a-c-t-l-y as big as half the car. After a two-minute ride, with a cool breeze on his neck and on his gloveless hands, he reached his destination. He stopped on the sidewalk; she was standing few feet away. Before he had time to take his helmet off, she said in one breath, and with some trepidation: “And now, what shall become of us without any barbarians?” He did not answer but as he stood down from the scooter, turned it off and put it on the stand, he thought, with a mix of regret, frustration and grief: “Those people were some kind of solution.”

Then, out of the blue, a red minivan approached. Easing the car slowly along the sidewalk, the driver brought the couple into view and coasted to a halt, softly touching the brake, making his stop lights flare: two ruby-red fires glowing in the dark. The man rolled down the window and asked the pair for directions. He had things to deliver. As soon as he got the information he wanted, the driver turned the radio on (a pop tune from the eighties was playing) and left as stealthy as he came. The same piano tune looped over and over and over as the car taillights ghosted slowly to the east and out of sight. Suddenly, it was silence again in Via degli Omenoni. He stared at her—his beautiful Madonnina; her skin pure gold, just like her dress. Her arms open with palms upward, as if she’s been waiting for something for quite some time (maybe just a little bit of heart and soul). He felt as low as her head was high. “Leaving you ain’t easy now,” he said. Then the girl in the cafe taps him on the shoulder and he realizes five years have gone by. He’s older. 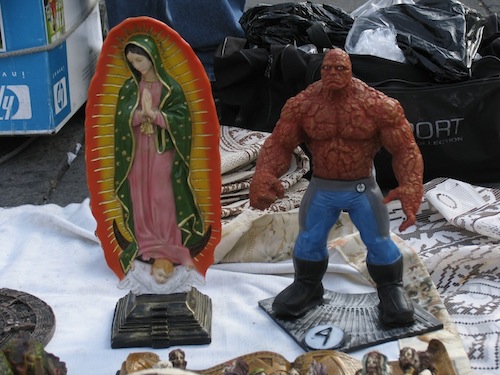 Scultpures at a flea market. Courtesy of the artist

Memories smolder, winter’s colder. Still, that same piano tune loops over and over and over in his head. “Double espresso, please”. The owner of the cafe is looking at him from over the counter (the skin of his face looks like a piece of fabric, full of wrinkles and impossible to iron). The owner has a hard-boiled egg in his hands; he peels it with care, puts a little salt on it, and eats it in one bite. A picture of him on the Great Wall of China hangs behind the counter. “How was it?”, he asks pointing at the picture, while the waitress serves him the double espresso at his table. “Pretty repetitive,” answers the man, throwing the eggshells in the trash.“I walked for seven hours on that damn thing. It felt as if I walked for seven hours without moving an inch.” Then I must be on the Great Wall of China right now, he thinks without saying it. As new customers come in, everything around him smells of morning routine. The newspaper delivery guy enters the cafe and drops a pile of magazines right next to his table. He picks up a copy of The Quarterly Musical Magazine and Review. 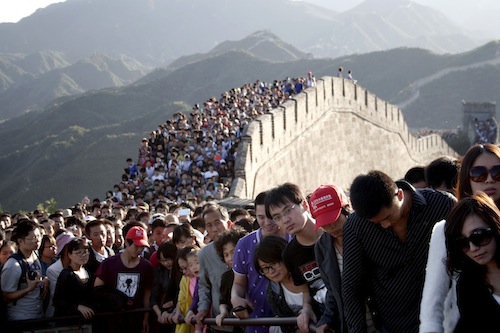 There’s a review of the latest gig by Ludwig van Beethoven at London’s Philharmonic Society. He reads: “The truth is that elegance, purity and propriety of our art, have been gradually yielding with the altered matters of the times of multifarious and superficial accomplishments, with frivolous and affected manners. Minds, that from education and habit can think of little else than dress, fashion, intrigue, novel-reading, and dissipation, are not likely to feel the elaborate and less feverish pleasures of science and art. Beethoven writes to suit the present mania, and if this be so, he has succeeded in his purpose, for everywhere I hear the praises of this his last work…”. As his eyelids become heavy, he can actually hear the sound of time crashing in on itself, the resonance of his own steps on the thick bricks of the Great Wall, along with some damn noises from the kitchen (an orange-squeezer, maybe?). He closes the magazine, places it back on top of the pile, stands up and reaches for the counter to pay his dues. He hands the owner a shiny one Euro coin and walks out the door. Five years—that’s all he’s thinking about now.

Five years since that night, since that semi-hollow tray, that two-minute ride, that red minivan. Five years since the barbarians didn’t show up—and yet they were expected to do so! Feeling his thoughts slipping away, he decides to go for a walk. All manner of amusing things happen around him (a man dressed as a clown is breakdancing in the street; two folks and a girl are playing at dice on an iPad). But nothing distracts him. He just walks and thinks, and thinks and walks until, as often happens in bad films and great books, a little bit of history repeats itself. There are 2565 streets in the city of Milan, but when his feet stop the name on the sign reads “Via degli Omenoni”(oh, the magic of fiction!). There he is. Again. Only this time it is the middle of the day and rays of light bounce like tennis balls on the pale surfaces of the buildings around. It all shines bright. Everything is beautiful, nothing hurts. Then he looks up, his chin in the air, and he realizes something: the barbarians are there. They’re standing right in front of him. They’ve always been there.

Oh, and she’s there too. “Welcome back home,” she says. 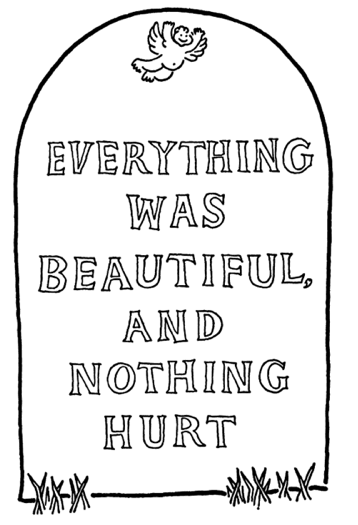 Quote from Kurt Vonnegut’s Slaughterhouse-Five, or The Children’s Crusade: A Duty-Dance with Death (1969)

Tuttofuoco’s work has been shown in several museums and in public spaces in Italy (Venice Biennale, Gallery of Modern Art in Milan, Piazza del Popolo in Rome, MART Contemporary and Modern Art Museum of Trento and Rovereto) and internationally (Museum of Contemporary Art in Tokyo, de Appel in Amsterdam, Shanghai Biennial, Havana Biennial, Folkstone Triennial). Recent projects include Antinori Family Museum in San Casciano, Florence (2013) and a solo show at the Italian Institute of Culture in Madrid (in collaboration with Fondazione Re Rebaudengo).

Valentina Sansone is a writer and curator based in Milan. She works on fiction, storytelling and narrative structures in contemporary art and their variations through different media, especially sculpture and performance.