Of all the fashion capitols, New York City is the most dogged with accusations of being overly commercial and derivative. It’s a well-earned reputation going back to the early 20th century when French haute couture’s supremacy was a real and unchallengeable thing and its couturiers would license their designs to American manufacturers and department stores for sanctioned copying. But if a manufacturer or department store couldn’t afford the fees, they’d enlist a copy house who got the inside scoop by sending spies with photographic memories posing as heiresses to shows and personal appointments. At the most extreme, a copy house might hijack an entire shipment of couture garments before they left Paris, copy it and return it under the nose of the dockmaster who would of course be paid off for his discretion. It was an unglamorous practice. Even when New York started to produce designers of note of their own they were obligated to step in line with Parisian trends lest they face ridicule and lose the attention of crucial buyers. You could say this history has resulted in severe confidence and identity issues for American designers who seem fearful of their own inclinations and regard European, and specifically Parisian fashion, like some other kind of un-compromised source of pure inspiration, like an orchid or a Picasso: sources that can be mined and indulged without reproach. What is startling when one looks at the Spring/Summer 2014 collections that were just shown in New York is how much the Paris shows still inform New York fashion, and how much of it goes unchallenged, and in fact is enabled, by the media and retailers who seem to purposely overlook New York’s shortcomings lest they admit that it, save for a few rare and incredible talents, is truly second-rate to Paris. 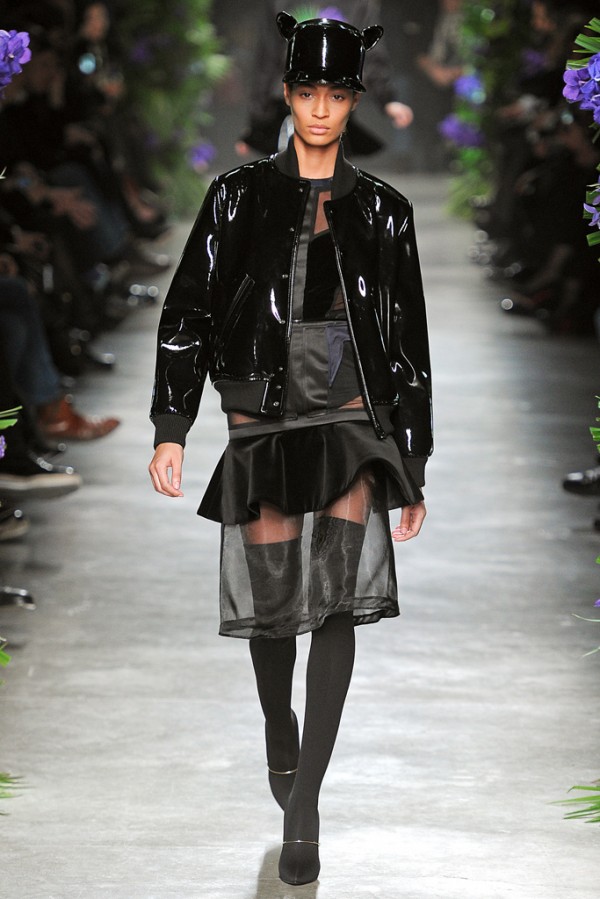 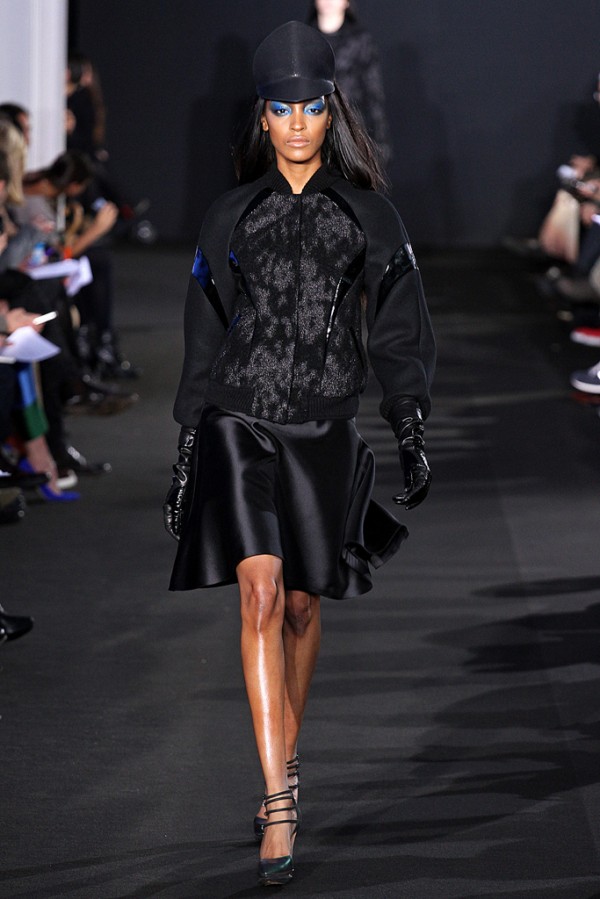 The show that was perhaps the most alarming, if only for the size of the spectacle that surrounded it, was Prabal Gurung’s. Trained in New Delhi and New York, Gurung worked at Cynthia Rowley and Bill Blass before launching his collection in 2009. He immediately demonstrated a flair for couture-flavored construction, conventional but impeccable femininity, and a daring–though at many times, faltering–taste for camp. His considered and beautifully executed clothes evoked some of New York’s greats like Pauline Trigère, Norman Norell, and at its best, Charles James. But Gurung eventually fell to the French effect, his collections slowly turned to the news from Paris for direction and identity. 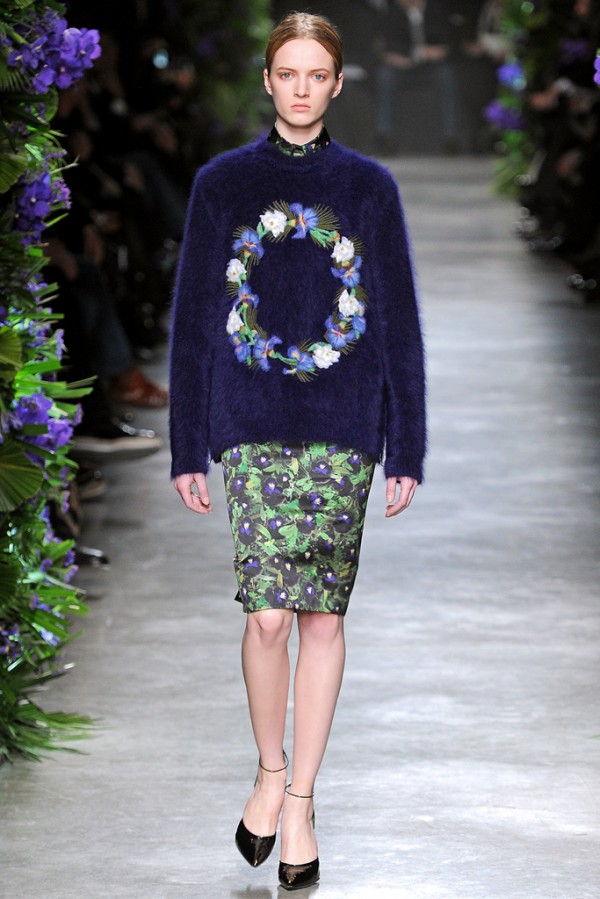 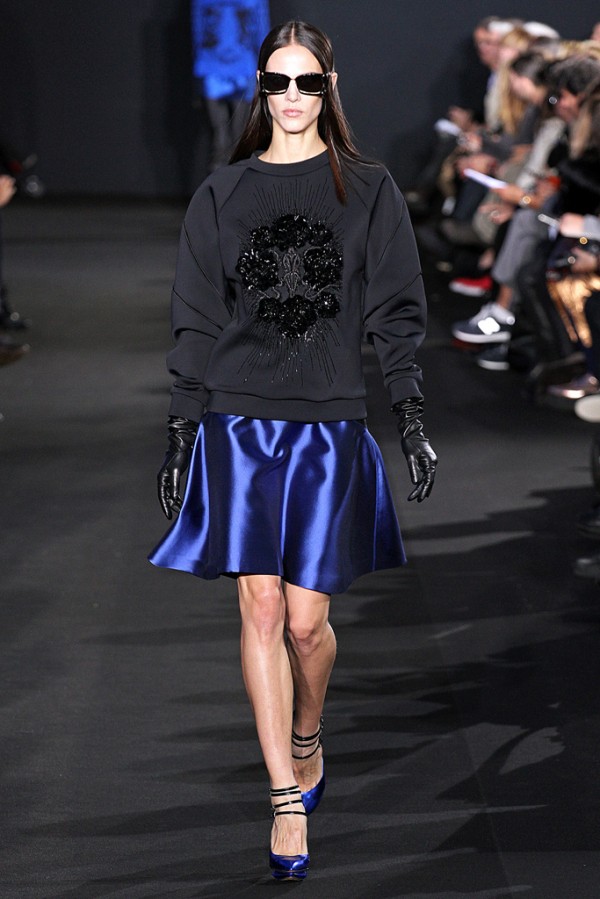 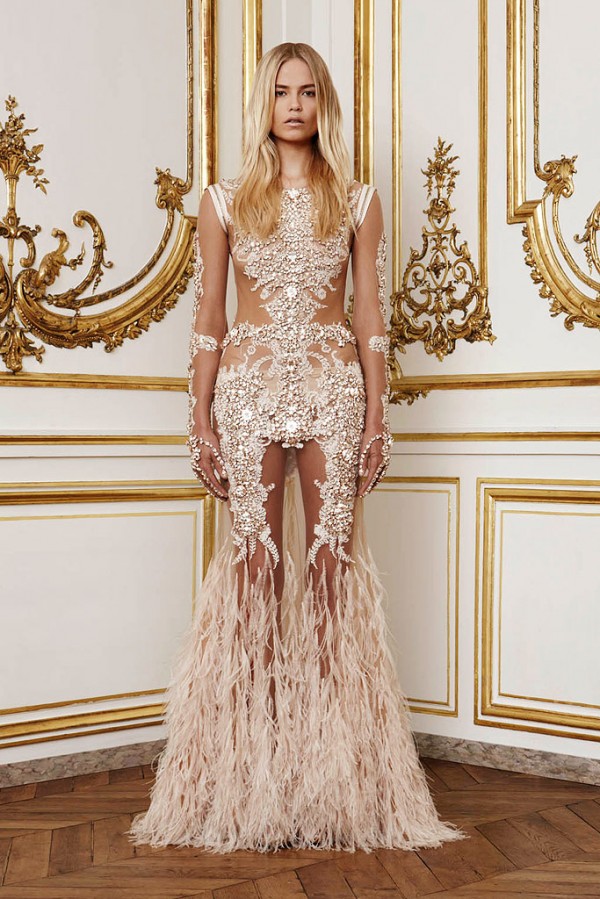 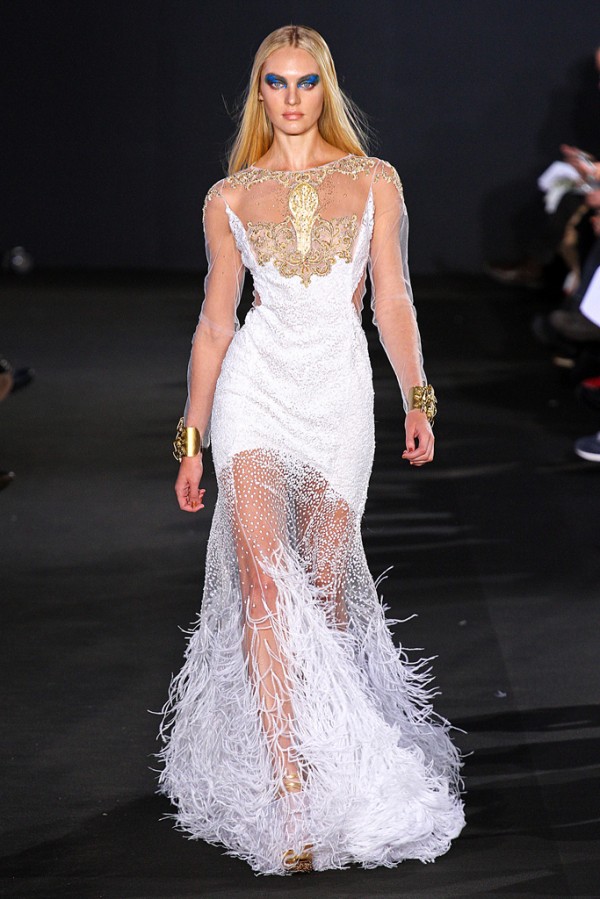 One collection in particular, despite the designer’s proclamation that it was his most soul-baring, read like a fanboy homage to Givenchy’s Riccardo Tisci whose influence, to be fair, has found its way into more collections than just Gurung’s. For his recent collection Gurung shifted gears, like a faithful barometer of the times, and turned his eye to Raf Simons. Simons’s work for Christian Dior has received much fanfare with overwhelming support coming from magazines and retailers, so it is no wonder his ideas are fresh in Gurung’s mind. But the sherbet colors, graphic floral prints, and overall pseudo-1950s motifs smack of the collections Simons has done for Dior and in one mortifyingly obvious case, Jil Sander. To be utterly honest, it’s not so clear if Simon’s ideas are so compelling that they demand their own watered down version here in New York (after all, a good idea is a good idea and is hard to pass up) so you wonder what Gurung’s real motivation is exactly. Is it an unconscious display of a design inferiority complex? Is it a calculated move to appear relevant when his intuition otherwise can’t? 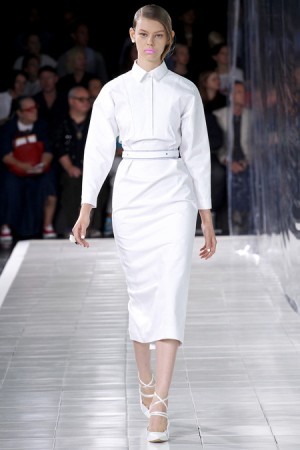 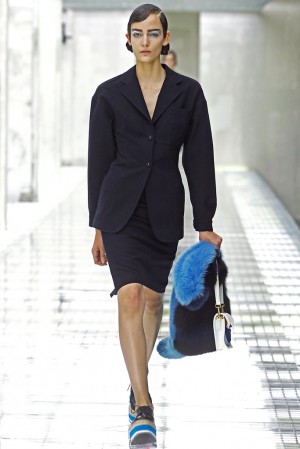 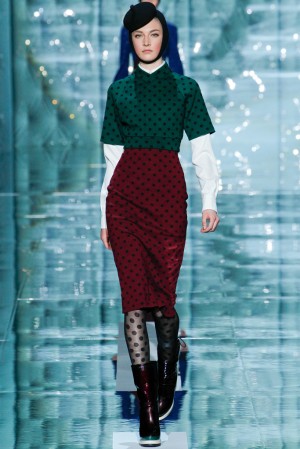 Is that why he used silhouette templates from Prada S/S 2011 by way of Marc Jacobs F/W 2011? Or tossed in a hint of Miu Miu S/S 2012 to throw us off the scent? The presentation of the clothes had the models coming out of and returning to a box made of clear plastic vinyl hanging from the ceiling (unsurprisingly the underlying concept of this set was taken from Marc Jacob’s F/W 2010 staging). If the intention was to be transparent, then mission accomplished. 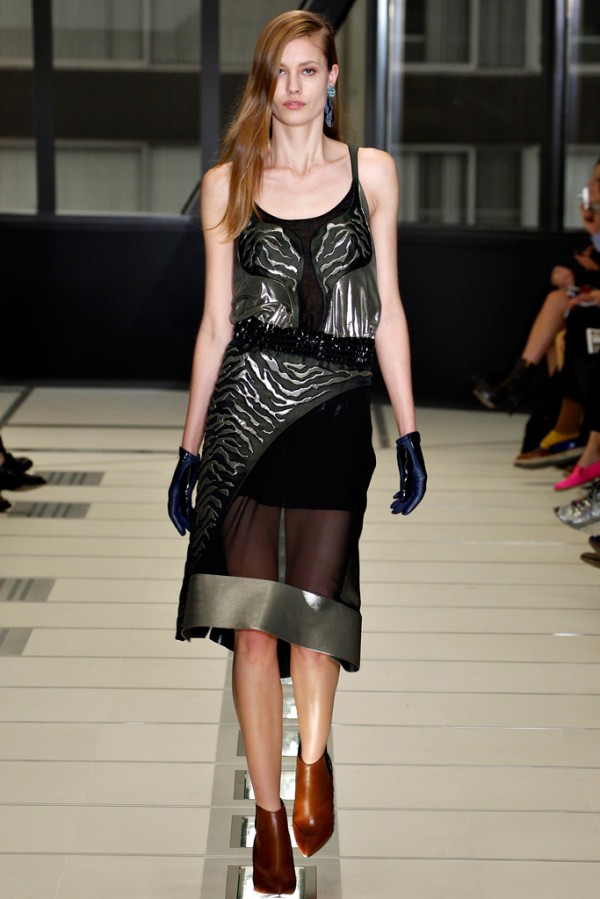 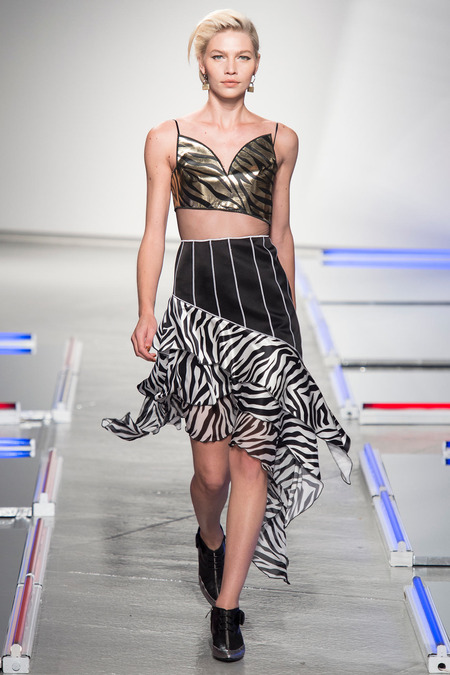 The other glaring show this week was Rodarte designed by sisters Laura and Kate Mulleavy. When the two first appeared on the scene in 2005 they enchanted the industry with their wide-eyed charm and overtly girly (yet geeky) fascinations. Their clothes, at once saccharine and grotesque, were compelling and new. While overwrought is not synonymous with couture, Rodarte gained fans amongst those who valued its hand-crafted feeling and wholly individualistic take on beauty. But if anyone had ever wondered who bought their frothy and fairly challenging concoctions the answer would be not many. Very likely spurred by the need to sustain their business and sell actual clothes, the sisters have since moved into a more “commercial” direction and like a huge majority of the contemporary market, which siphons freely off directional designer collections to refashion into lest costly and sale-able pieces, the sisters turned to what has been the fashion industry’s most reliable source for good ideas: Nicholas Ghesquière. Of course they are not alone. Proenza Schouler’s Lazaro Hernandez and Jack McCollough had their own Balenciaga moment for their F/W 2012 collection utilizing many of the same ideas on fabric piecing, silhouette, and proportions that Ghesquière had defined seasons before. Yet, despite their obvious inspiration the designers managed to instill a sense of who they are aided only by their flawless execution. They at least could claim that their take on Balenciaga was more wearable and in some ways desirable. 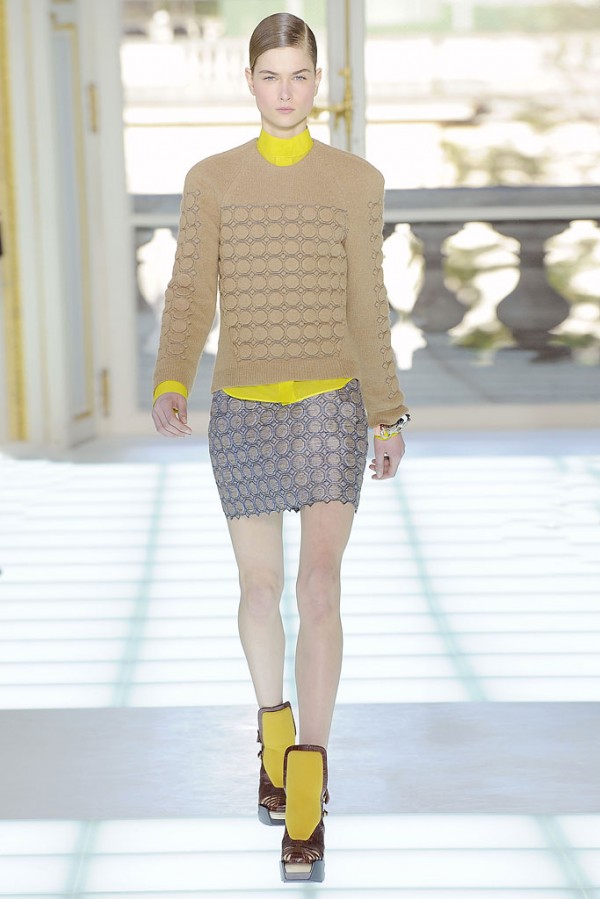 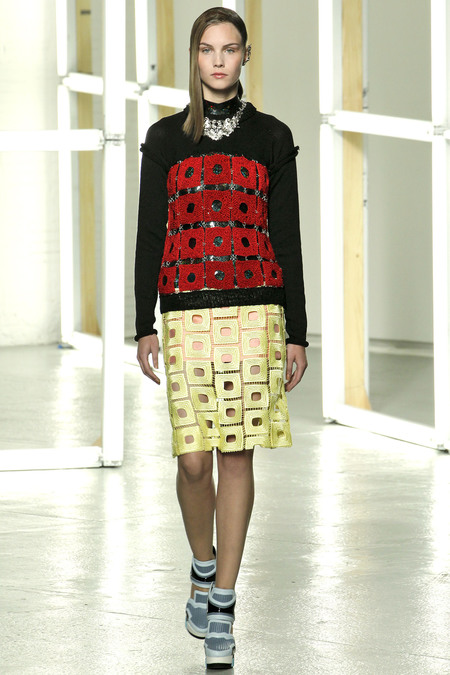 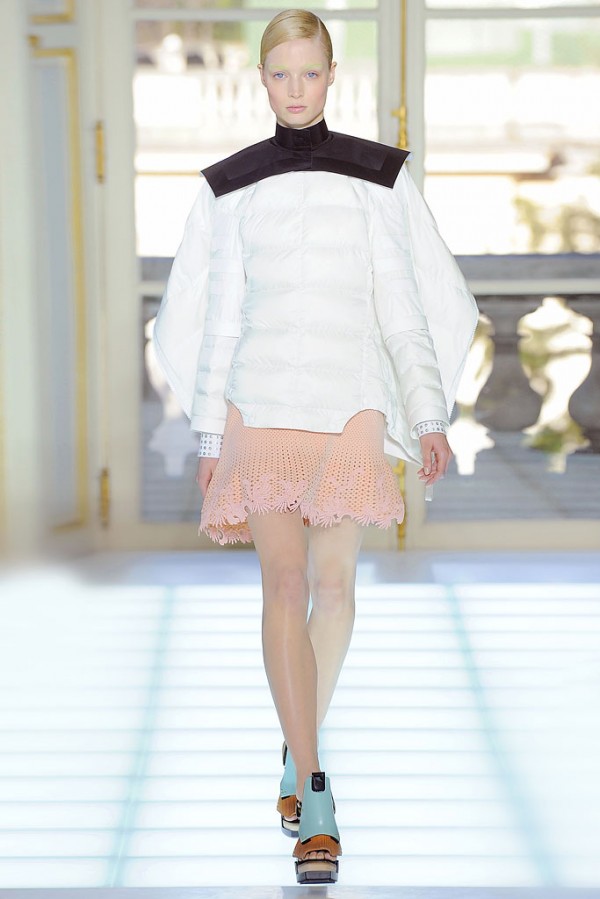 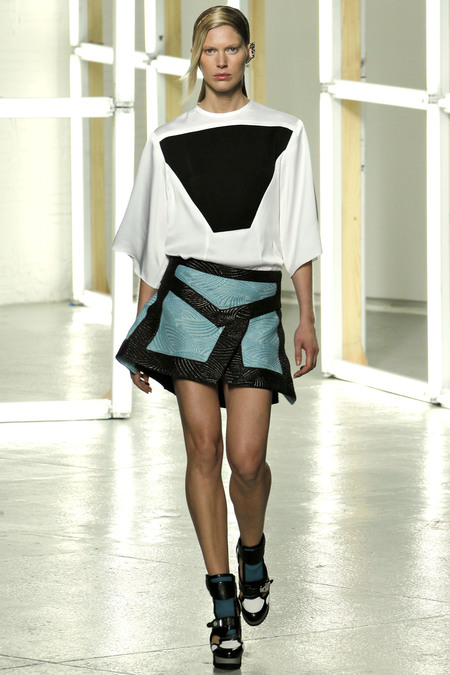 But with Rodarte this is simply not the case, certainly not for their Spring 2013 collection which also referenced Ghesquière’s signature “techno-retro” language sans the technical prowess the aesthetic demands in order to be successful. It’s a surprising turn for designers known for their couture touch (which may have only been a witless scratch on the head after all). 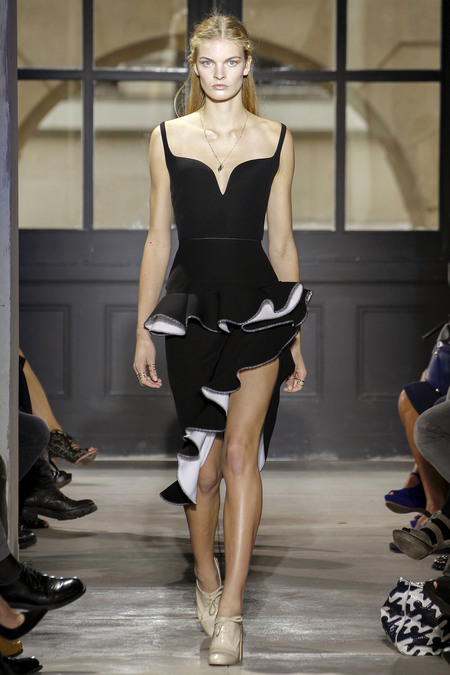 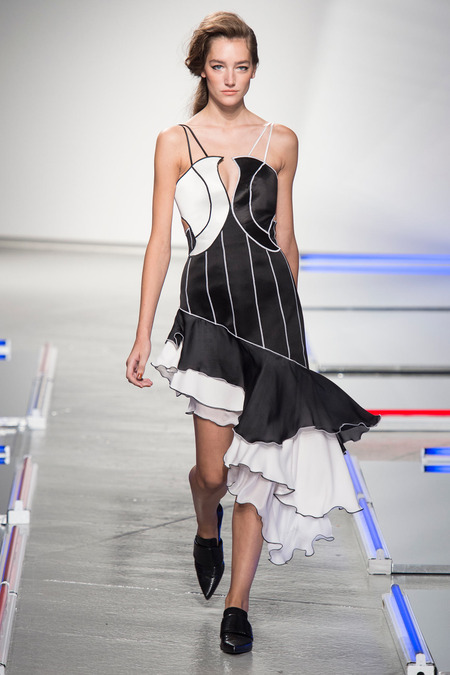 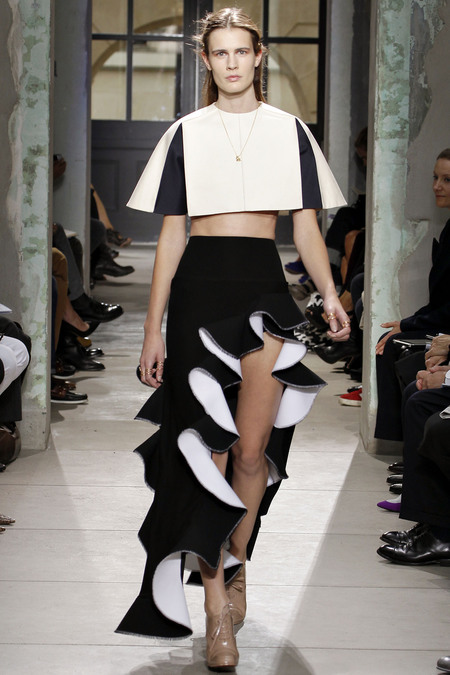 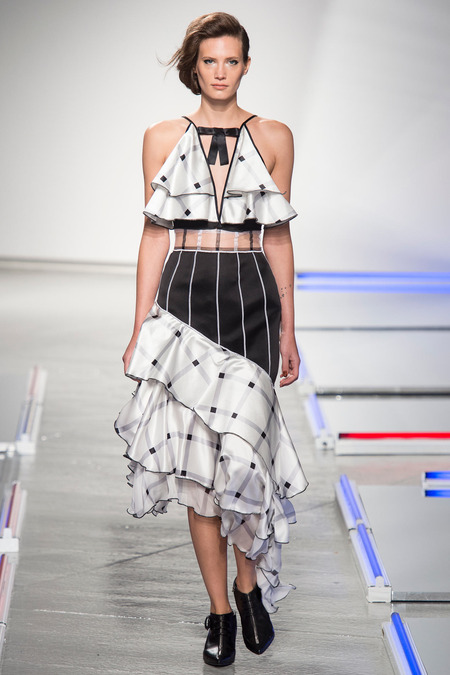 For S/S 2014 Rodarte reached (and strained) for an awkward amalgam of the asymmetrical flamenco flounces from Balenciaga’s S/S 2013 collection (Ghesquiere’s swan song for the house) and the peaked metallic animal printed bodices from F/W 2012. Combined under the guise of “Los Angeles” (poor city of angels, always used as an excuse for trash taste), the result was a discombobulated assortment of prostitute, bad girl clichés and sloppily realized clothes which might have shared Ghesquière’s subversive attitude and bravery had they gotten a bit more love in the development process and of course, were the sister’s actually original ideas. For all the costumes on the runway, the real bad girls of this collection were standing backstage.

It is not fair to single out Rodarte and Prabal Gurung though their affectations are the most distinct and undeniable of the week. One mustn’t forget Alexander Wang’s S/S 2013 collection which, to use the harshest but most appropriate language, stole not only the clothes but the shoes and hair styling from little known Brazilian designer Tufi Duek’s Spring/2011 collection. His peer and friend Joseph Altuzarra has shown collections which cite influence from Tom Ford era Gucci, that influence has bordered on plagiarism (for his F/W 2012 collection he did in fact copy a boot from Gucci F/W 2008 verbatim and also made short work of Balenciaga’s F/W 2007 anime/prep school collection). The influence of Paris on New York is undeniable but what is more problematic than the fact that the city’s design leaders feel compelled to take direction from other designers is that no one on this side of the Atlantic seems to mind. Fashion critics and writers rarely ever call out these influences when discussing a designer’s collection, as if they don’t want to be rude or undermine their standing with the brand. But this silence does a disservice not just to the New York design community but to the designer’s growth and development. What becomes a fashion brand that, when given the chance to produce a pure and uncompromised expression for the season, falls back on the expressions of others? As fashion culture is continually demystified and consumers grow increasingly educated and sophisticated, what could possibly be seen as aspirational for the luxury consumer in brand that can’t produce an authentic and vital proposition of its own? Can New York designers summon a voice and will of their own or is it truly the fate of New York fashion to forever be the butt of jokes by our European counterparts?