Art Education from Noun to Adjective

Pablo Helguera
Manifesto about how the only way to salvage the art school is to build an institution that is a university with a curriculum conceived by the visual arts. 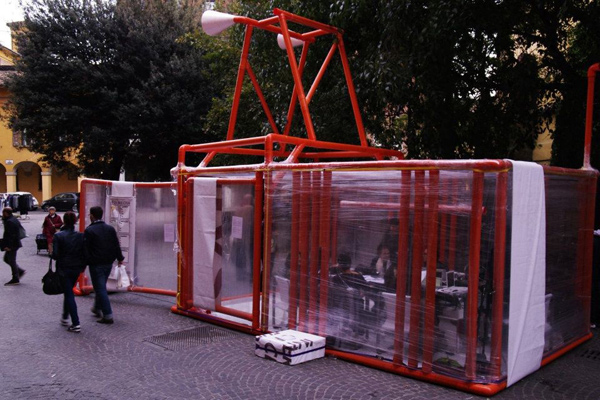 The literature, symposia, essays, and other similar efforts produced around the reinvention of the art school depart from the premise that art making requires a space outside of the normal confines of the university.

The emergence of the European academies was based on the drive to professionalize artists through a separate environment that would best facilitate their development. This rationale has continued to permeate every thinking about the art practice, ranging from the Bauhaus’s first year program to the present day art school.

Given the era of specialization that we live in today, it would only make sense to think that the art profession needs to continue existing, more than ever, in its own environment. Yet this is precisely the push to isolate the art school what is now outdated in terms of how artists have moved art into the social realm.

Art that is fueled by a modernist, and even a post-modernist sensibility continues to need a self-enclosed environment that helps signify it — a social and cultural space which, like the museum, is specifically designated to turn any gesture into a gesture specifically designed to be interpreted within the cultural framework and universes of meanings of art. Yet the gradual push toward art as process and the abandonment of the art object — or the use of the art object merely as a reference, but no longer the final product of the art experience— has also eroded the boundary of art and the world. By and far the desire of the new generations of artists who try to break new ground is by reintegrating art practice into the world, and not rejecting it.

In this state of affairs, the art school gradually fulfills more and more the place of the art academy of the XIXth century. Art students in art school produce academic conceptual or performance works, pieces that only replicate the rhetorical twists and turns of Feminism, identity politics, and Minimalist aesthetics, but always without fully resolving the great contradictions that rebelling against a safe environment generate.

As an example of how the art school is the new academy, it is not difficult to look at the roster of most influential artists of the last two decades, and the extent to which most of them did not go to art school, or nurtured themselves through their interest and knowledge from other disciplines. While the existing art school model has excelled at providing artists with the manufacturing and technical skills to present their work, and only barely has helped artists at articulating their ideas, it has generally proved to be a very poor environment for true multi-disciplinarity, producing artists with mostly very naïve ideas about any other area outside of the art practice. It is possible that, once historians conduct a thorough study of the effect of art schools in artist production of our time, they may find that there was a “correcting” process that every art school graduate undergoes where he or she integrated their own life experience or other expertise into their work, reconciling it with what they have learned in art school. I remember Gabriel Orozco saying once that he truly started being an artist when he decided he would give up making art, shortly after leaving art school.

It is often argued that art cannot be taught, and as such art schools are meaningless institutions anyway. This commonplace statement glosses over self-evident truths about the art practice: certainly there is much to be learned about the manufacture of art, about the historical context under which art is made, about the myriad ways in which art becomes a language, and more specifically, to learn about the worldview of a wide number of artists. While all of this could ostensibly be learned individually, this statement is similar to calling for the end of all structured schooling.

The true debate should then not be about whether the art school model is viable; it is on what is the viable model to form artists who will advance the art practice.

At the core of the construction of that model is the problem of what constitutes deskilling/expertise in art, or in other words, the question of what artists need to know, what is it that they do know, and where do their expertise lie.

Many current art schools have dismantled the technical skills once provided by the Bauhaus model, while not truly replacing them by other than theory along with a tenuous and generally random set of subjects that usually satisfy the personal taste or political views of the instructions and the school’s decision-makers. As a result, we produce artists without developed traditional skills and instead with an extremely self-conscious understanding of their own practice, as method actors who focus so much on the method that they become paralyzed.

A traditional model can hardly be dismantled in order to be renewed; it either needs to be followed thoroughly or replaced by a new model.

So while the traditional XXth century art school may still be functional and necessary for the production of XXth century art, the new school needs to respond to the terms under which new practices are currently redefining art production.

There may certainly many models to conceive and pursue in the future, but while we must be visionary as we reconfigure the new environments for art learning we also currently need to think about it in pragmatic and realistic ways.

The most direct and logical way to think about this problem, I believe, has to do to institutionally embody the idea that art has become a meta-discipline — that is, that it modifies other disciplines by bringing their activity into a territory of experience, ambiguity, contradiction and criticality. Art making becomes a vehicle of producing knowledge in relation with other disciplines, and while it can continue to be a vehicle in it of itself, it can also function as a vehicle to advance the discourse of other areas of knowledge and human activity. This is not to mean that art would cease to become a specialty, but rather that the artist would become a trained, mediating agent between a given discipline or sets of disciplines and the sphere of art production.

An art university would be a hybrid institution that understands art not as a set of aesthetic principles (the academy) or technological ideas (Bauhaus), nor a place where art is produced to exist and be interpreted within its own controlled context (the present day art school). Instead it would be a location where visual art ideas permeate the sensibility of all that is studied there; the container within which the humanities and sciences are studied. It is not that, say, chemistry is an art form —it is not— but studied in the art context informs both art making and the original discipline itself.

In the same way in which art practice abandoned the object and instead focused on its modifiers, art education needs to abandon art instruction as the objective and instead focus on how art modifies reality. It may be seen at first as a difficult, and perhaps suspicious venture — as the territory for art as a meta-discipline has yet not been traced. Yet given the current debates and collective interest of the practice, this seems to be the logical progression toward the goal of building an institution that would retain enough flexibility to produce innovative and critical thinking through creativity, and would be structured enough to allow future artists to not produce art in a vacuum.

Finally, an art university is not an art school embedded within a university program, but the other way around — a university embedded under the umbrella of an art institution. Its conceptualization and implementation may be the great challenge for the new generation of those working today in institutionalized education— those who may want to offer a truly experimental environment for art making that is truly in sych with other disciplines, allowing art production to remain at the same time an autonomous zone while also being a source of knowledge production — art as knowledge of the world.