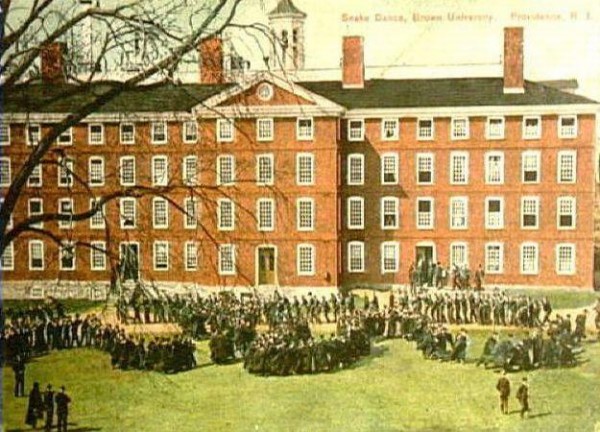 Outside of Cooper Union’s Great Hall, the famous theater located in the school’s basement, is a great hallway. It has a black and white checkered floor, and its walls are lined with portraits of Peter Cooper along side lots of explanatory text. Cooper, we learn, was a humble visionary and successful man. He wanted everyone to have what he did not, an excellent education, for free.

I walked through that hallway just that after seeing Bruce High Quality’s “Animal Farm,” a musical adaptation of Orwell’s story that the collective retrofitted for criticism of Cooper’s current tuition debacle. Criticizing foundational ethics from within the architectural foundation is always a dubious start. It already seems like fodder for an Orwellian narrative that Cooper Union offers a free education in part because they own the land the Chrysler building sits on.1 Half of the play depicted inconclusive, unproductive board members – roosters – meeting and lazily arguing about tuition. Decisions were sloppily made that greatly affected the other half of those depicted in the play, art student graduates – pigs – who were working in a bar. The musical was refreshing, ramshackle and informative.

The art education discussion starts and ends with money and because most of us will not go to Cooper Union, we will be in debt. The underlying question about money as it relates to education is about legitimizing our financial investment. We want it to pay off. Okay, back to half of the play depicting board meetings; the beautiful virtuous hall basement. This tableau translates to one unfashionable word: Administration. Schools used to be modeled after monasteries, hidden away in a beautiful field in the country. Previous generations of artists sought to go against the grain of academia. Now we are sprinting towards it, often in cities, trying to use its higher secrets to our own advantage. Education is not only in a state of growth, it is in a state of crisis, and it is the single most important factor in our country’s poverty problem.2 Sometimes it comes as a surprise to me, with the art market running after youth that we are not taking it a step further and thinking about…babies.

Sheila Pepe, the artist, mentor, and nearly twenty-year professor of fine art said, “This is how we need to think about making art education today for twenty years down the line: Children today no longer really need to learn to how to count change.”3 She meant actual change, like coins, because ostensibly most purchases will become digital. She also says she is now an academic administrator of an art school in New York City because that job is about enacting, for lack of less politically familiar vague term, change. She did not stop teaching art because she became cynical, or because they demanded too much of her. Pepe realized as an adjunct art professor, it’s hard to help impact the institution. Being an administrator often means analyzing how funds are disseminated in support of learning. Different kinds of institutions do it differently– private education verses public research institutions, for example. It is also puts into question, what should a student be required to learn? Akin to making art, administering is creative labor.

Administration is using, and sometimes inventing systems. It is grabbing temporality by the shoulders. It is using your sculptural mind to think in time and space. Sheila elaborated: iPhone information design both mirrors and generates new creative thinking and mapping. Unlike handwriting or the typewriter, entering information on a screen means you can edit while you are making and old marks just disappear. The working parts are hidden. There are layers in digital media, although you don’t know what is behind that thing without looking at it with specific kinds of knowledge (like abstract painting). We can think about administration theoretically, spatially and philosophically. What will the next generation learn in place of that skill of counting change and how can we prepare for it? How will education take shape, how will being online and not “in-person” improve things? When did everyone become so down and passé and doomster? Sheila is replete with Bauhaus Futurist excitement. Thinking spatially and temporally serves administrative work; thinking as an artist helps.

Lisi Raskin, an established artist and professor of graduate art, asks questions about time too: What will they be left with when the class is over?4 Less plan-view than Sheila, Lisi’s inquiries reside in the classroom and the MFA curricula. She was recently offered a show at the VCU fine arts gallery. Instead of “having a show” she gave the class of students whom she had taught the previous semester her slot in the space. Everyone read Paul Thek’s notes on teaching.5 They made the show together in four days. From the press release of the exhibition: “Some highlights include: Affirmations of the belief that narratives can be rewritten, improved, forgotten, or redacted at any moment. The psychic signing of a nonverbal contract to be vulnerable in front of each other. Sincere pride in the great ideas of fellow artists.” I saw the show and it was one of the best shows I have seen all year. It was a mess. Lisi claims she is a facilitator, not a teacher; her approach is Foucauldian and thus doggedly non-hierarchical. She is preternaturally The Ignorant Schoolmaster.6

I questioned her about trends and changes, like – do you see art schools as having esthetic styles? She disregarded these issues (because they are not really important) and pressed concerns like demographics. What is the responsibility of the institution to cater wealthy clients? What is the responsibility to cater to a diverse population? What happens when artist all from the same financial echelon talk to each other for two years during their MFA degree program? What happens when artists from different realities make art together?

Lisi told me that she is interested in designing educational frameworks because it feels just as challenging and inventive as “creative” work. She threw around ideas: graduate programs could require tenured faculty to co-teach with younger adjunct professors. Public speaking, writing and technology coursework would all be components in preparing artists to earn a living wage in tandem with their art practice. Requirements could be designed that requires students to go overseas in the summer. This effort would work to demystify other art markets, especially geographically, since we may soon be required to have PhDs.7 Professional development would promote variegated ways of being successful and thus promote new approaches to art making. Increasingly, new alternatives to the MFA paradigm are being made available to the community – see footnote – that encourage artistic and educational agency. We need these alternatives not just as ways of escaping the MFA, but hopefully they can then inform and redefine what happens inside of the classroom.8

In place of a conclusion, I’ll raise the question again: What will the next generation learn in place of that skill of counting change and how can we prepare for it? I am not suggesting we all reroute our paths and work at universities. I want more good art, more versions of success and less debt – everything this audience is conversant in. But listening to Lisi and Sheila made me re-realize those essential components of good art thinking all over again – challenging, futuristic, daring and confusing… just like administration.

Rose Marcus is an artist, curator and art laborer currently obtaining a master in art history living and working in New York City.