Censorship, Corporate Values, and the Destruction of the American Working Middle-Class 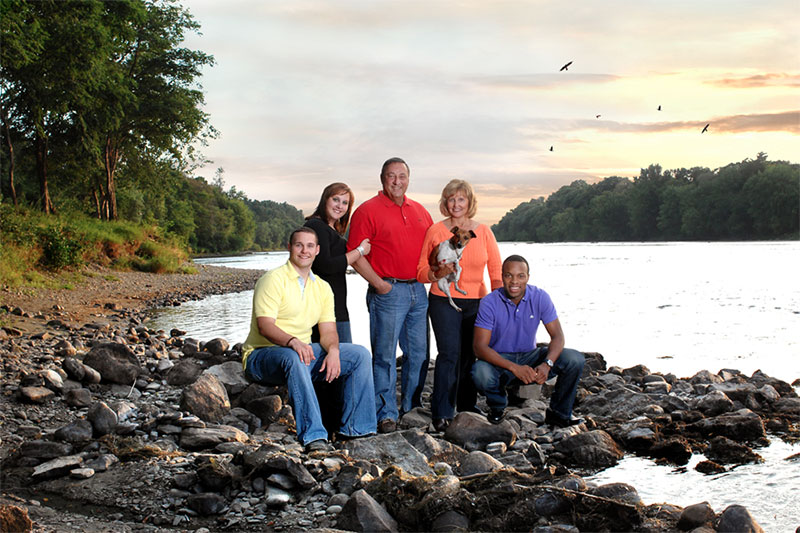 Paul Le Page, a Tea Party-backed Republican candidate who was elected Governor of Maine with only 38 percent of the vote, has been a labor antagonist in his first ninety days in office. Le Page praised his Tea-Party colleague, Gov. Scott Walker for his success in stripping Wisconsin public employees of collective bargaining rights. Le Page has pledged to make Maine a “right to work” state, and ordered the removal of a recently-commissioned mural depicting Maine’s labor history from the lobby of the Department of Labor.1 Le Page’s actions define him as anti-union, anti-worker, and anti working middle-class. “Right to work” means non-union workers have the same protections and benefits of union workers, but without paying union dues. This means union legal responsibilities are increased while their economic resources are diminished. “Right to work for less” is designed to spread labor union resources so thin that the union breaks down entirely. 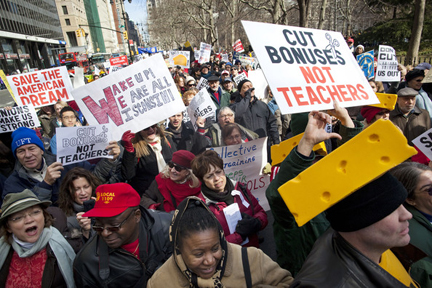 Collective bargaining ensures equal pay for equal work, eliminating income disparities across race and gender lines. Nationally, men earn on average 29 percent more than women who perform equal work.3 If Le Page succeeds in making Maine a “right to work” state, working women and people of color will be hit hardest by these wage cuts. On average, union women workers earn $205 more each week than non-union women workers. Latino union members earn $247 more each week than non-union Latinos. African Americans earn $164 more each week if they are union members.4 “Right to work” helps a worker bring home $600 less per month. “It’s unfortunate that Governor LePage continues to pick fights with the working class in Maine,” said Don Berry, president of the Maine AFL-CIO. “This is political payback, the opposite of putting people first. It’s a spiteful, mean-spirited move by the governor that does nothing to create jobs or improve the Maine economy.”5

While Gov. Le Page seeks to destroy unions, he also is taking aim at art that doesn’t reflect his administration’s pro-business agenda. On March 23, Le Page ordered that a mural depicting Maine’s labor history be removed from the Department of Labor. 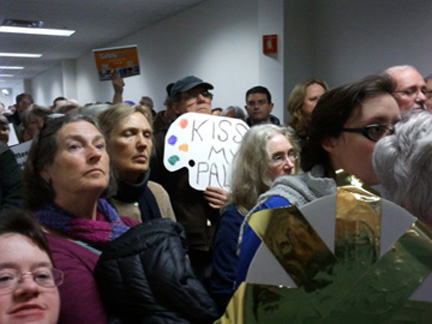 The next day, which coincided with the one-hundred year anniversary of the Triangle Shirtwaist Factory fire in New York City which killed 146 people, mostly women and girls, hundreds of protesters flooded the Department of Labor to protest the planned removal of the labor-themed mural from the building’s lobby. Despite the protests, the mural was removed over the weekend of March 25 and is currently being stored at an undisclosed location. One week after the mural was taken down, an artist’s group called “BrokeFix” projected video footage of the mural on the façade of the Department of Labor building, in a subversive act of art and protest dubbed “video-bombing” (see also “yarn-bombing”). The “BrokeFix” artists, who agreed to be interviewed by The Huffington Post on the condition of anonymity, criticized the partisan and ideological divides in politics, but also took a strong stance against the notion that labor unions bear responsibility for U.S. economic problems. “Even if the most severe of allegations against the labor unions were true, the money cost to the taxpayers is negligible when compared to the taxpayer cost of supporting the true parasites of our social, political and economic systems,” they argued.6

In true Tea Party form, Le Page’s mandate for tearing down the mural was this single anonymous letter7, which his office released to the media:

Welcome to Augusta. You are doing a great job. Keep it up.

The purpose of my letter is to express my disbelief of what I saw at the Maine Department of Labor Offices in Augusta during a recent visit. While sitting in the lobby I had the opportunity to study a very large mural which adorns the lobby area. In this mural I observed a figure which closely resembles the former Commissioner of Labor. In studying the mural I also observed that this mural is nothing but propaganda to further the agenda of the Union movement. I felt for a moment that I was in communist North Korea where they use these murals to brainwash the masses.

Mr. LePage with all due respect I must say: “MR. LEPAGE, PLEASE TEAR DOWN THIS MURAL.”

Again, thank you for your candor and fresh approach to State Government. Keep up the good work.

The “figure” the anonymous letter refers to as the “former Commissioner of Labor,” is Frances Perkins, who is depicted in one scene from the 11-panel mural. She was the first female cabinet member and served as Secretary of Labor under President Roosevelt during the “Progressive Era,” and “worked to establish Social Security, unemployment insurance, the right of workers to unionize, the minimum wage, and the forty-hour workweek.”8 Lynn Pasquerella, the president of Perkins’ alma mater, Mount Holyoke College, wrote to LePage that she was “surprised to read that you were influenced by an anonymous fax comparing the 11-panel mural to North Korean political propaganda.” Le Page seeks to further his political agenda by erasing labor history. Pasquerella continues, “The act of removing images commemorating Maine’s history itself conjures thoughts of the rewriting of history prevalent in totalitarian regimes.”9

This brings to mind Rockefeller’s commission of a mural by Diego Rivera, and its subsequent removal from Rockefeller Center. Gary Wills from the New York Review of Books notes this in a blog post:

[The removal of Taylor’s mural] ranks with the most famous removal of a mural from a public building in America, when John D. and Nelson Rockefeller destroyed a large painting they had, themselves, commissioned in 1932 from the famous Mexican painter Diego Rivera for their new Rockefeller Center building. Rivera called the painting “Man at the Crossroads,” and he included in the choices facing workers during the Depression a portrait of Lenin. When told he must remove the portrait, he refused, saying the commissioners knew his leftist record when they asked him to do the painting. He said he would balance the portrait with one of Lincoln. After the Rockefellers destroyed his art work in 1934, he recreated it in the Palace of Fine Arts in Mexico City, adding a portrait of John D. Rockefeller in a nightclub.10 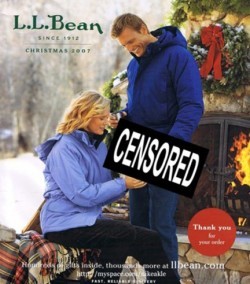 “When a new administration comes in, you talk about message, you talk about rebranding,” said Adrienne Bennett, spokesperson for Gov. Le Page, adding that the mural does not reflect the governor’s agenda. “Where are the job creators? Where is Mr. Bean?” she asked, referring to the founder of Maine-based L.L. Bean, purveyor of Shetland sweaters, hunting boots and other preppy outdoor wear.11 Le Page has forgotten the people who contribute to his paycheck, but not the corporations that financially backed his run for office. L.L. Bean’s heirs have had a spotty history of financially supporting conservative causes that oppose gay rights and opposing workers’ attempts to unionize.

This past winter, on December 1, 2010, David Wojnarowicz’s video, A Fire in My Belly, was removed from the National Portrait Gallery exhibit Hide/Seek: Difference and Desire in American Portraiture by order of the secretary of The Smithsonian, G. Wayne Clough. Wojnarowicz’s video, a tribute to a former lover of the late artist who died of AIDS complications, depicts ants crawling on a crucifix, sparked complaints about the use of taxpayer money from William Donohue of the notoriously anti-gay Catholic League and Representative John Boehner (who has demanded that the Department of Justice channel funds to the House to defend DOMA) even though the exhibition is privately funded.12 Protestors from Art+ organized a direct action and picketed the National Mall in January, protesting the removal of the video, and two protestors showed the video in a trailer they parked outside the National Portrait Gallery.

In 1999, when Rudy Giuliani was Mayor of New York, (Giuliani started his political career as Associate Attorney General under President Reagan, infamous for his ignorance and inaction during the AIDS epidemic, and his en masse firing of union air

traffic controllers on strike in 1981) Giuliani sued the Brooklyn Museum for opening the much-hyped exhibit Sensation: Young British Artists from the Saatchi Collection, which included the work of then-emerging British artists such as Chris Ofili and Damien Hirst. Giuliani pulled funding from the museum because he found Ofili’s painting The Holy Virgin Mary anti-Catholic, even though he did not see the painting in person. Federal Judge Nina Gershon ruled in favor of the Brooklyn Museum, and wrote, ”There is no federal constitutional issue more grave than the effort by government officials to censor works of expression and to threaten the vitality of a major cultural institution as punishment for failing to abide by governmental demands for orthodoxy.”13

The federal government has demanded that Le Page either put the artwork back up at the Department of Labor or repay the cost of the mural. A U.S. Department of Labor spokesman explained to The Huffington Post “that the federal money was given to the state of Maine for its unemployment insurance fund. But now that the funds are not being spent on their designated use, the state must put back 63.39 percent of the painting’s value into its own jobless fund. The fair market value of the painting was $60,000 when the funds were first allocated, but that may have changed.”14

“On April 8, the Portland Museum of Art held a panel discussion about the mural. It drew such a large crowd that museum workers set up live feeds on two televisions outside the auditorium. The panel included Taylor, art historians and a conservative radio host who, to snickers and gasps, argued the side of the absent governor. After the discussion, the mural artist Judy Taylor, 56, offered to take LePage up on his call for a complimentary mural featuring businessmen, though she had some reservations. ‘How boring would that be as a painting? People talking on cellphones — who wants to see that?” she said.’”15 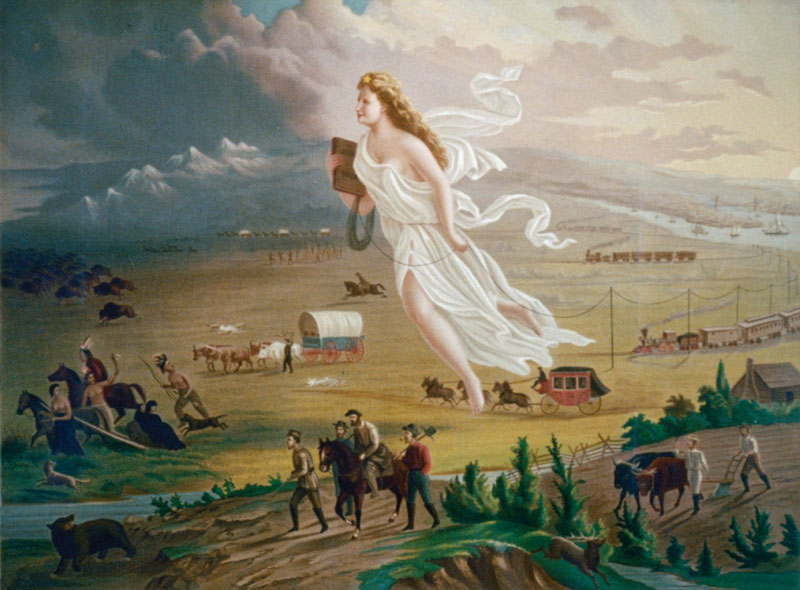 Cara Erskine is an artist based in Pittsburgh, PA, where she works as a union apprentice electrician. Cara earned her MFA from Yale University School of Art in 2002. Her sculpture will be included in the upcoming Pittsburgh Biennial at the Andy Warhol Museum.