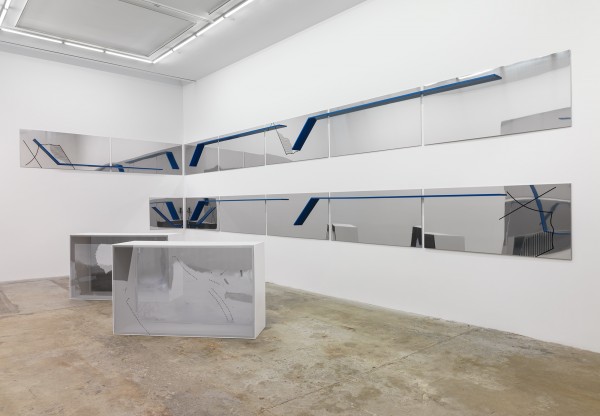 Artie Vierkant’s show, A Model Release, at UntItled consists of four new pieces from two distinct bodies of work. Executed through processes that affect a wide spectrum of the population, the works on view are accessible to both the intellectually and visually curious alike.

While Detachable storage rack for metallic structure and Air filter and method of constructing the same add to the series Exploits made within the constraints of several patents licensed by the artist, Antoine Office, Antoine Casual, was produced from a new line of inquiry into the artist’s continued interest in “conversations about how society polices itself.” 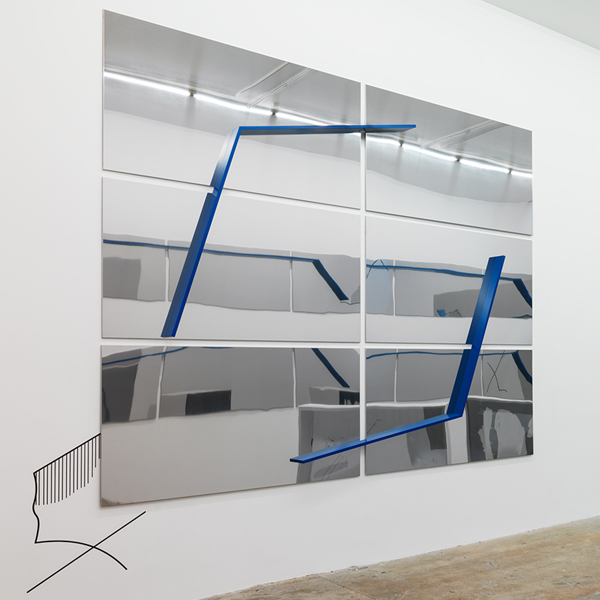 Detachable storage rack for metallic structure is made from multiple stainless steel plates connected by blue ‘shelves’ held in place with rare earth magnets. Fragments from the patent diagrams are silkscreened on the walls and metal panels. The cuboids that make up Air filter and method of constructing the same – each with wide white frames and taut screen sides – are reflected in the surrounding semi-reflective surface of Detachable storage rack for metallic structure. 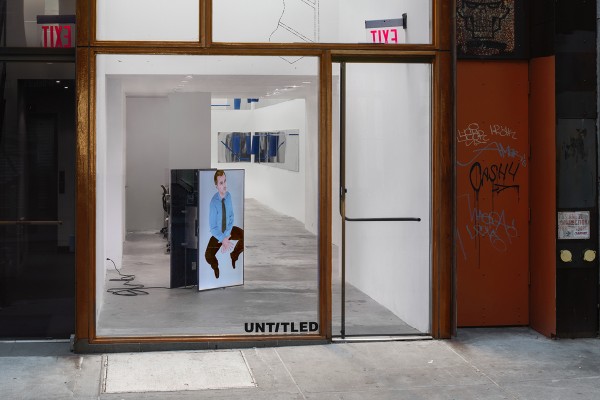 In the front room two monitors connected back-to-back display Antoine Office, Antoine Casual. Despite representing interests parallel to Exploits, the work maintains a formal and pictorial relationship to Air filter and method of constructing the same. The latter’s screen sides are not only dematerialized like the implied narrow sides of Antoine Office, Antoine Casual but also imprinted with duotone images of the 2D clothing maps used to clad the digital Antoines. 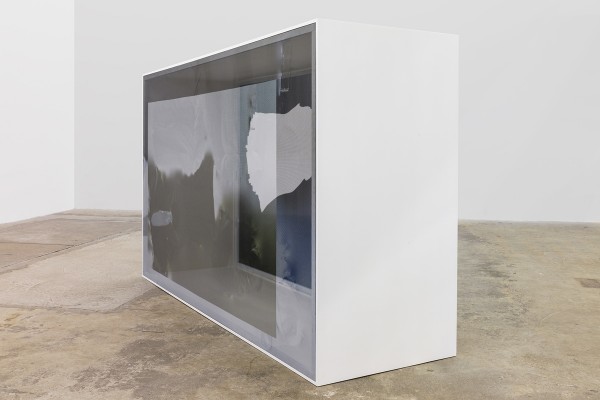 To make Air filter and method for constructing the same, Vierkant licensed a patent after negotiating binding terms that stipulated the artist’s use of the system described therein. The contract between Vierkant and the patent holder not only restricts the number of times the patent can be deployed but also attempts to legally distinguish artistic from non-artistic usage by regulating the locations where Vierkant’s ‘derivative works’ may be sold. While liscensing the patent may seem like a creatively masochistic gesture, Vierkant submits to the patents’ constraints in order to explore the extent of liberty within them. 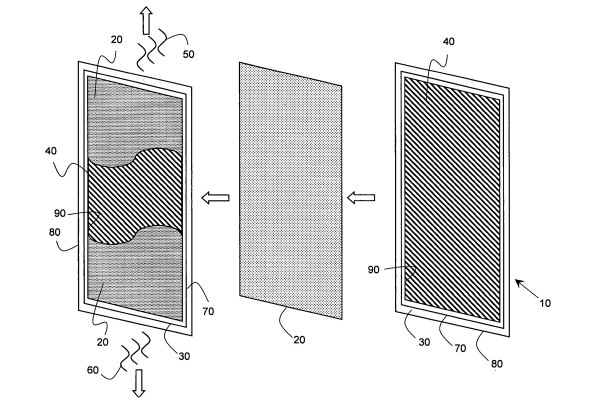 This professorial rebellion against the single-author model perpetuated by the ability to copyright intellectual property outside the discipline of fine art also inversely calls into question the lack of such legal protection within the discipline. However, this is not a new concern to the artist, who in his potentially canonical 2010 essay, The Image Object Post-Internet, describes an ecology of art making in part defined by, “ubiquitous authorship;” comprised of “reader-authors who by necessity must regard all cultural output as an idea or work in progress able to be taken up and continued by any of its viewers.” By modeling this condition in the context of intellectual property – where the open source mentality can be legally restricted – Exploits is also demonstrative of the artist’s ability to share the same high quality of insight outside the post-internet discourse as he has previously deployed within it.

Should the strategy of participating in a system that perpetuates a single-author system still seem counterintuitive to resisting it, during a recent conversation at UntItled Vierkant explained further, stating that, “sometimes the best way to show the problem is by repeating the error.”

If the legal ‘frottage’ within Exploits creates a strange cartography of disciplinary boundaries, in Antoine Office, Antoine Casual, quite possibly the most important portrait now on view in New York, Vierkant transposes an open source nightmare onto the boundaries of the physical body itself by superimposing a multi-authored model onto a single avatar. At a more basic level, if Exploits in general embodies an archipelago of possible actions the body is capable of in the world (within legal rights), Antoine Office, Antoine Casual in general speculates on a near future wherein external forces not only act on the body but through it.

In a similar fashion to Matthew Booth’s equally important Milk Drop Coronet, Vierkant’s model of Antoine was made by interpolating 2D photographic information to generate a 3D model. The captured data, in its photographic form, is then mapped onto the surface of the computer model resulting in a digitally three dimensional photograph. While Booth’s Milk Drop Coronet engages dialectically with Dr. Harold Edgerton’s 1936 photograph of the same name (itself made in dialogue with coronet studies generated by A.M. Worthington in 1908) in order to demonstrate the radical precision possible using time slice photography, Vierkant demonstrates alternative ways to activate the digital model. 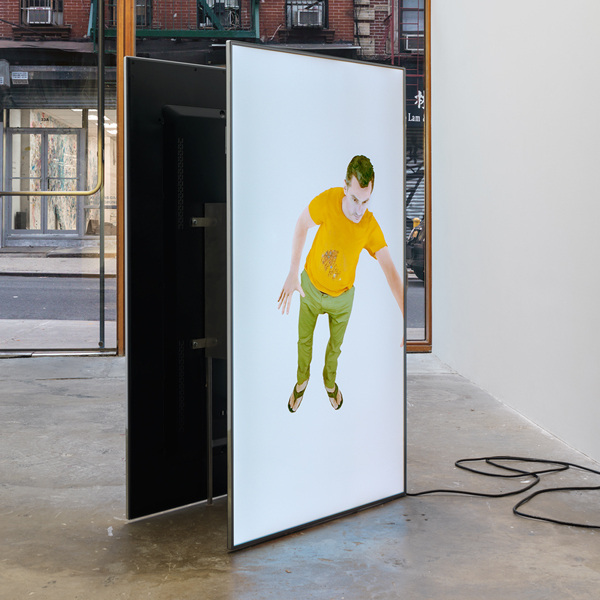 Animated by motion data from several random individuals, Antoine Office, Antoine Casual, like marionettes with too many puppeteers, jerks and squats, stuttering through fragmented gestures – some unfamiliar, others humorously so (such as when the avatar appears for a moment to perform part of raunchy dance move – hand moving in a partial-swat). A metaphorical body politic, Antoine makes a noteworthy contribution to the discourse of biological trespassing, and more optimistically expands the concept of cooperative identities. 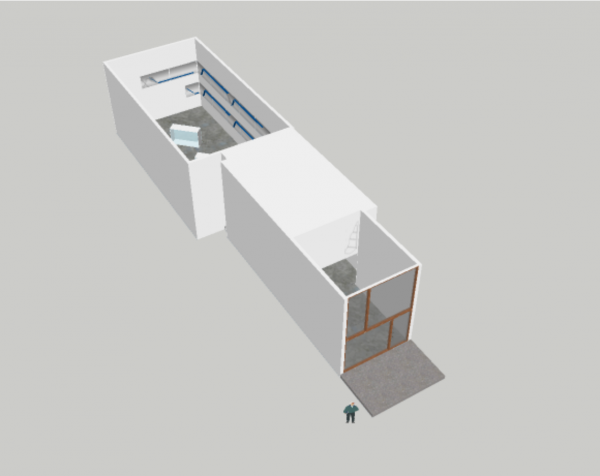 What are the possible motivations for taking up such state-of-the-art-technology and parsing the legal apparatus protecting intellectual property when many artists are still making materialist work reliant on the language within their description to key into contemporary discourse? (For example, a painting that employs cobwebs to connect to conversations about the World Wide Web).

A clue perhaps can be found in Vierkant’s 2010 Image Object manifesto, where the artist suggests that, “Ironically, the most radical and ‘progressive’ movements of the Post-Internet period would be those who either pass by either largely unnoticed due to a decision to opt out of any easily-accessible distribution networks, or else would be composed of a community of people producing cultural objects not intended as artistic propositions and not applying themselves with the label of artist.”

This frame may suggest a burgeoning role for vanguard art practices wherein the modes of capital or political production are not only revealed as agents that affect mass subjective development but are mastered, taken up into the artist’s palette to be manipulated and freely deployed as speculations unconstrained by capital or political interests.

It is thus conceivable that, just as ‘acceleration’ seeks to destabilize capitalism through capitalist means, vanguard art production may find the most agency when it appears to disappear within the same strategies that contribute to narrowing the status quo, in order to disrupt it. In such a scenario, life without art is not something to be feared, it is the goal.